Launch control is the rider-aids programme designed to help MotoGP riders when they rocket away from the grid at the start of races. This is how it works… 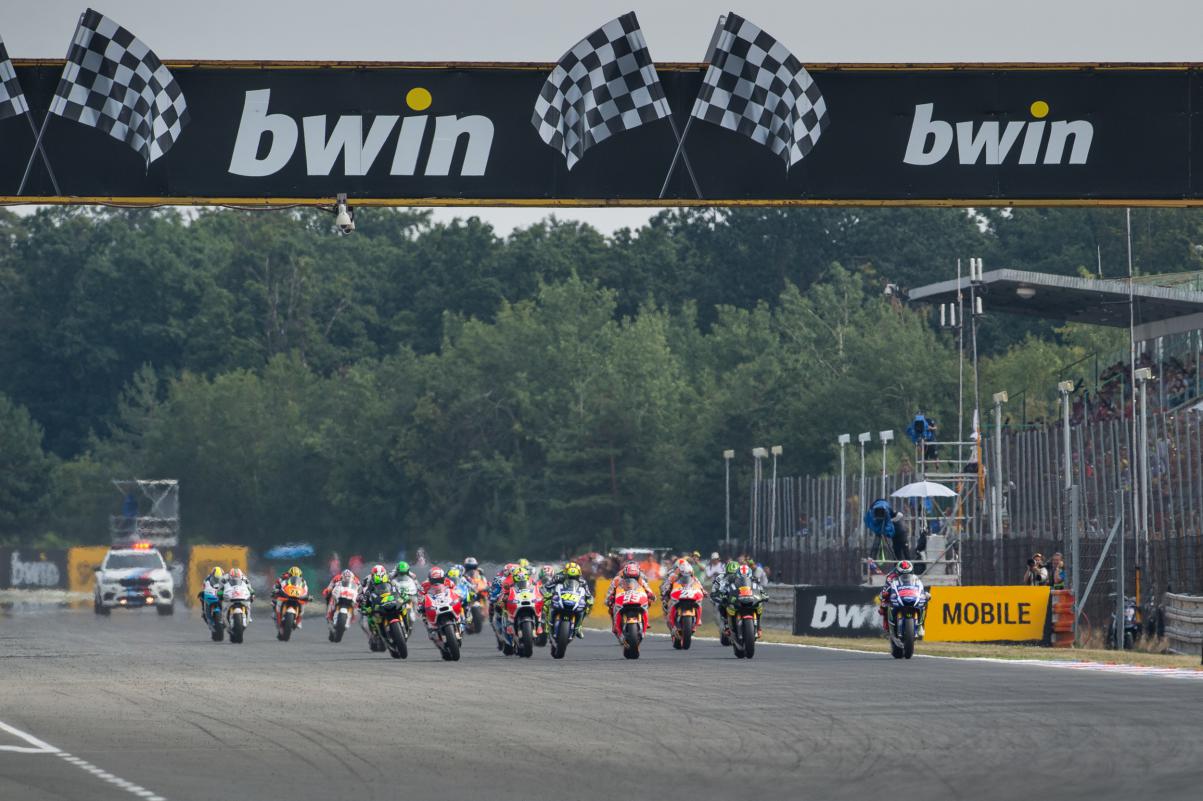 Overtaking in MotoGP gets more and more difficult for all kinds of reasons, from the reduced braking distances allowed by carbon brakes to the fact that all the bikes now have very similar performance.

This is what makes the start of a race more important than ever and this is why launch control was invented. Launch-control programmes are designed to help the rider use maximum acceleration when he dumps the clutch on 260 horsepower. But like all MotoGP rider aids, Dorna’s recently introduced unified software is significantly less clever than the tailormade software created by the factories during the first decade or so of MotoGP.

Dorna’s idea was to reverse rider-aid technologies to their original concept – to improve safety, rather than increase performance. Magneti Marelli have applied that concept to launch control as well as the other four rider aids: traction control, anti-wheelie, engine-braking control and anti-jerk.

During the era of factory electronics, launch control became so effective that riders could use full throttle and dump the clutch when the red starter-lights were extinguished. Without rider aids, this behaviour would’ve spelt instant disaster: a dead-cert loop-the-loop. But the factory software was clever enough to have the situation under control, supplying exactly the right amount of power to the rear tyre, so the rider could race towards the first turn fully in control with the front wheel no more than a few inches off the ground.

Eventually most of the factories had similarly effective launch control, so it could be argued that this actually reduced safety, because all the riders arrived at the first corner at the same time.

Now riders must do most of the work themselves, which most people think is the way it should be, because rider skill is better rewarded.

You may have noticed that many riders do get sideways during race starts, despite launch control; this is because launch control doesn’t operate the traction-control system, it only operates anti-wheelie. 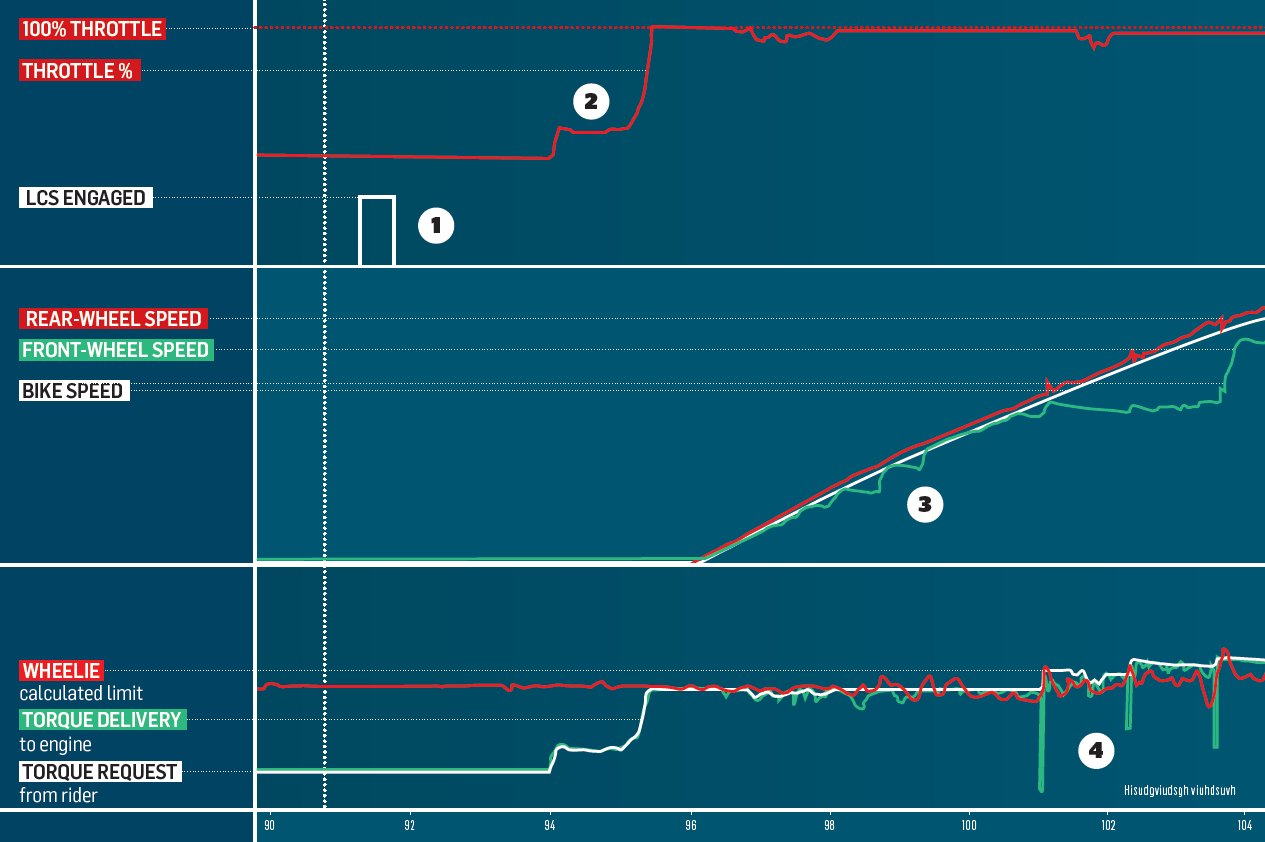 This signifies the rider pressing a button on the left handlebar to actuate the LC strategies. The system switches out of LC the moment the rider starts decelerating into the first corner. LC also adjusts the rev limiter, so the rider can fully open the throttle without danger of over-revving, and therefore concentrate solely on throttle/clutch balance.

Many riders blip the throttle before the red lights go out to start a race, but they do it for no real reason. Nervous riders tend to play with the gas more!

The rider has made a good getaway, without the front wheel lifting immediately and with minimal wheelspin. But that won’t last. The front wheel lifts slightly, decelerating immediately, which correlates with the rider hesitating with the throttle (see top section). The wheel lands for a moment and then lifts much higher when the rider shifts into second. Meanwhile the red trace moves above the white trace and stays there, denoting wheelspin, with a spike at each gear shift, which continues unabated until the rider slows for the first corner. LC does not feature traction control because the fewer control strategies working at any point, the better. Also, straight-line wheelspin isn’t potentially dangerous to a MotoGP rider – he should be able to control it with his throttle hand. 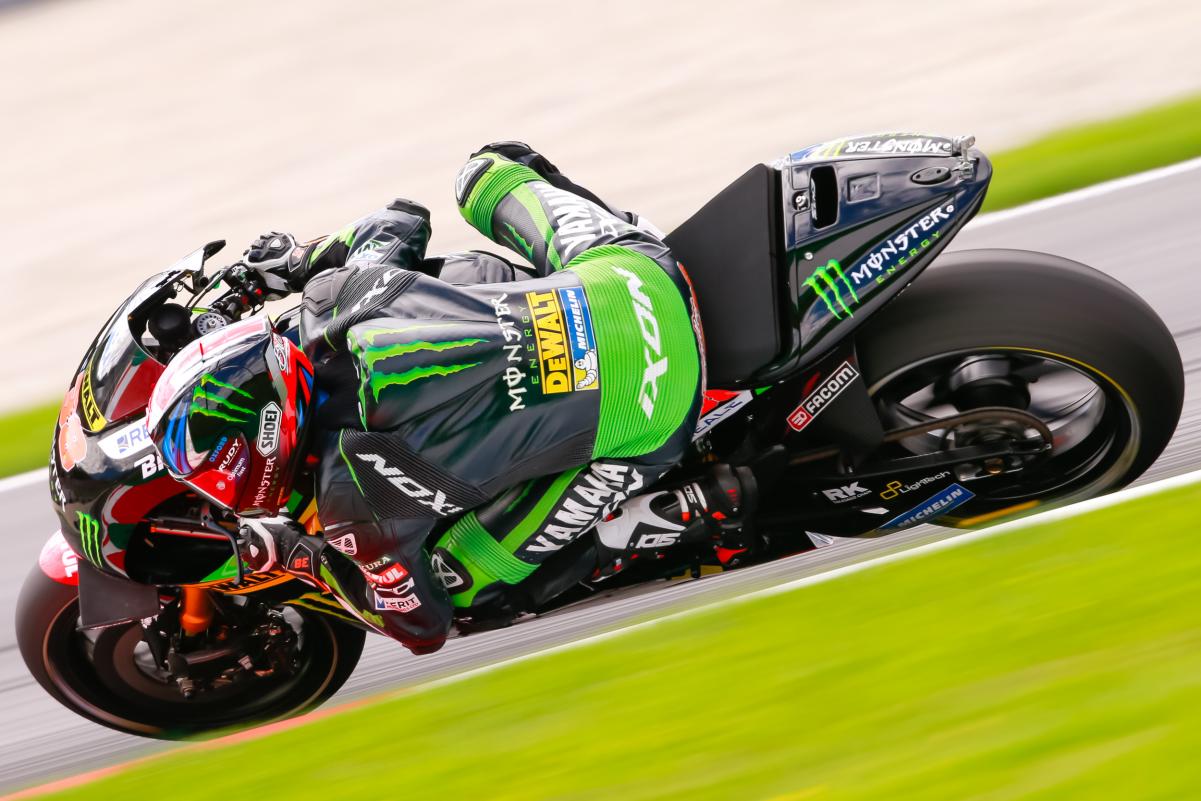 “Last year, getting my starts right was the hardest thing. In 2015, before the unified software, I’d be wide open, dump the clutch, get the bike launched. The launch control would sort everything out. Now you can’t use full power, so I’ll start at, say 75 percent, so when you release the clutch the initial torque engagement is less. Then when you go to full power you have to use the clutch again, otherwise the anti-wheelie comes in, the throttle butterflies bounce open and shut, so you feel like you’re on a rocking horse. If you see someone doing a power wheelie, it’s them controlling it, not the electronics. It’s been tough – at the first two races last year I span completely sideways at the start, so I had to retrain myself.”