Everyone in the MotoGP paddock and anyone that watches Moto3 knows that the category has a safety problem that urgently needs fixing.

Most Moto3 races are characterised by huge lead packs of marauding riders battling back and forth, swapping positions at every corner and drafting like crazy on the straights.

This kind of racing is excellent entertainment, but it carries with it real dangers, as sadly proved by the deaths of Jason Dupasquier during qualifying for May’s Italian GP and Hugo Millán during a recent European Talent Cup race. Both riders fell within a group and were struck by following riders.

Even some senior figures within MotoGP Race Control, who are responsible for the safety of riders, describe these races as “nigh-on unwatchable” because of the ever-present threat of serious accidents.

Other senior staff in MotoGP insist that these problems are caused by the behaviour of riders and their teams, but surely the riders and teams only behave like this because the way the motorcycles work forces them to work and ride in this way?

So how to fix the problem?

There are two main issues to consider. Firstly, the fact that the technical regulations are written to guarantee equal performance between every motorcycle on the grid. Obviously, this creates close racing.

Less obvious is the cause of the huge slipstreaming battles that are one of the main reasons that riders cannot escape from each other. Reducing the slipstream effect would be one step towards improving Moto3 safety.

Former 250cc, 500cc and MotoGP rider Jurgen van den Goorbergh believes he has the answer to the drafting conundrum.

The 51-year-old Dutchman retired from MotoGP following the 2005 season and now mentors 15-year-old son Zonta in the Moto3 junior world championship and the CIV Moto3 series.

He has studied the Moto3 problem carefully and sees a simple solution.

The issue regards the spacing of the upper gears in the six-speed gearbox of a Moto3 bike, which makes slipstreaming absolutely vital for good lap times in practice, qualifying and the race.

Gear ratios should be spaced out like a pyramid, with the speed gap between each ratio reducing as you go through the gears, as the engine’s effective torque reduces. 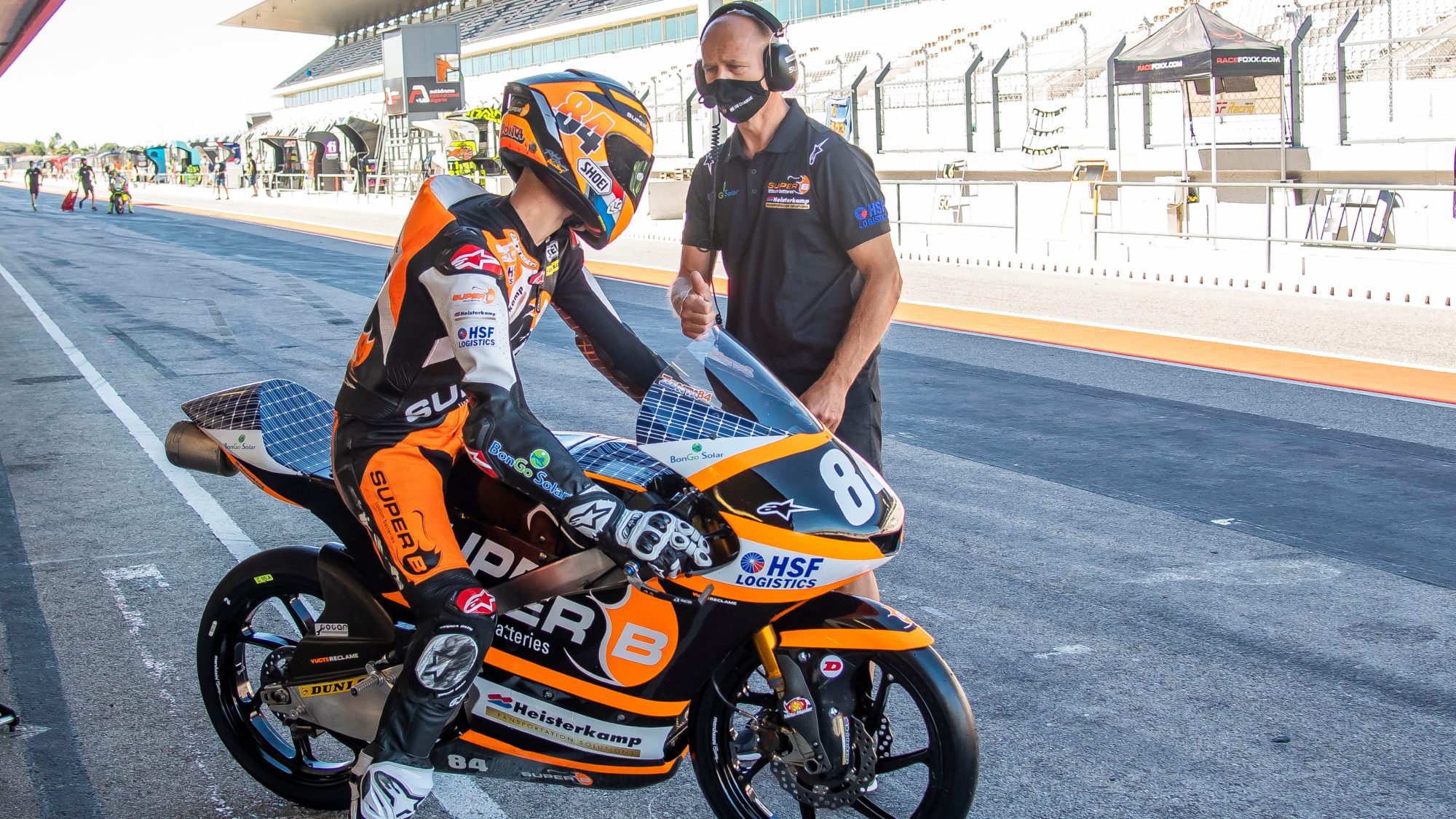 Therefore an ideal gearbox in a Moto3 bike might go something like this: the gap between first and second could be 20mph/32kmh, then 15mph/25kmh from second to third, 13mph/21kmh from third to fourth, 10mph/16kmh from fourth to fifth and from fifth to sixth.

But this isn’t what happens in Moto3 grands prix and therein lies the problem.

“What happens now in Moto3 is that teams create a gearbox in which the first four gears are made for the corners,” says van den Goorbergh. “They adjust those ratios very carefully to be really good thought the corners, but fifth and especially sixth are usually very different.

“At Barcelona, for example, the riders use fifth twice, once on the back straight and once on the start/finish, before they shift to sixth. The fifth gear may be OK, but then they need a sixth gear for slipstreaming on the long straight, so they do this by making sixth really tall.

“Sometimes the gap they have between fifth and sixth can be as big as 35kmh (24mph), so when they shift from fifth to sixth on the start/finish the rpm drops and nothing happens. This is if they are alone, but if they are in another rider’s slipstream they can use this high gear and make more top speed.

“This is why riders are waiting for each other in qualifying and this is why it’s almost impossible for a rider to win a race on his own. Once you are in the lead you have almost no chance anymore because you are giving so much speed to the guys chasing you. With a slipstream you can gain more than half a second or eight tenths a lap, so usually you cannot win alone, which creates a big, big problem. Also, it helps the less good riders go with the leaders.

“Even when I raced 500s we never ever pulled 35kmh from fifth to sixth, but they do this in Moto3 and this is what you see on the straights.

“It’s a massive problem. I think the gap allowed between fourth and fifth should be a maximum of 22kmh (14mph) and the gap between fifth and sixth no more than 20kmh (12mph).

“With this kind of gearbox the slipstream effect is still there, of course, but nothing like as much. Maybe you win one tenth a lap with a slipstream, not half a second or more. 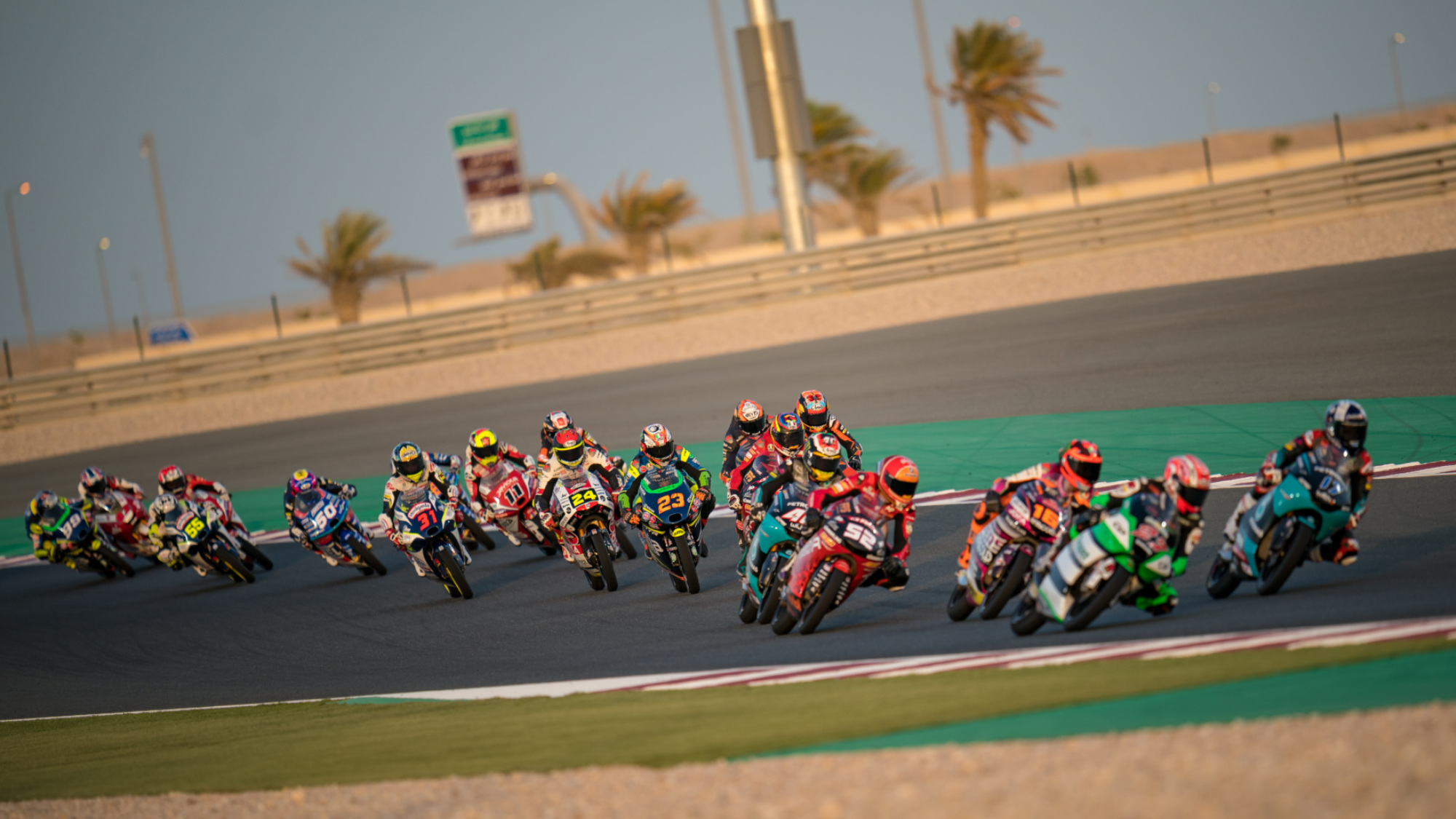 “The guys will come out of a corner and onto the straight, but the slipstream won’t work the same, so the guy who’s really fast can pull away and maybe take two or three guys with him, but you won’t get these crazy big groups we see all the time.

“So in fact it’s quite an easy problem to solve.”

Van den Goorbergh’s suggestion is to restrict the spread of gearbox ratios. Currently Moto3 allows only two alternative ratios per gear, but this still allows engineers to spread out the upper gears to take advantage of the slipstream. If the technical rules were rewritten to restrict teams to one or two gearbox set-ups, then this could solve the problem, or at least reduce the problem. 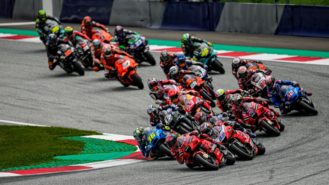 Joan Mir was struggling to retain his world title until a box of new parts arrived on Friday night. Plus Jorge Martin’s skills and Brembo’s Red Bull Ring brakes

“In the European Talent Cup they only allow one gearbox,” adds van den Goorbergh. “And you see hardly any slipstreaming in ETC races. When they get onto the straight they can slipstream each other but they cannot really use the draft to overtake, because the gearbox is set, with 16kmh (10mph) gaps from fourth to fifth and from fifth to sixth.”

Of course, the death of Millán in last month’s Aragon ETC race proved that reducing the slipstream effect in Moto3 GPs and CEV races won’t fully fix the Moto3 problem, but it might be a good place to start.

“Moto3 races are getting worse and worse,” continues van den Goorbergh. “I think the slipstream effect is 70% of the problem, and we can fix this simply, with zero cost.”

Will MotoGP officials listen to the Dutchman’s suggestions? Let’s hope they at least discuss them. And if it’s not possible to restrict teams to one or two gearbox set-ups – because of the difference between the KTM RC250GP and Honda NSF250RW engines – then simply put a limit on the fourth-to-fifth and fifth-to-sixth gaps.

There are other ideas in the Moto3 paddock to improve safety in the class, at least in qualifying. To discourage riders from waiting for a tow the grid could be decided by, say, the aggregate of a rider’s fastest five laps during the 15-minute Q1 and Q2 sessions.

This is another easy, zero-cost change to make.

Something needs to be done to Moto3 and it’s time to start experimenting with intelligent ideas, before there’s another Dupasquier-type accident.