Yamaha and Suzuki made a little bit of history at Misano. For the first time in more than 70 grands prix, inline-four MotoGP bikes totally dominated a race, taking five of the top-six places.

That is a mightily strong result from a configuration that’s only won two MotoGP titles since 2011, especially considering there are only six inline-four machines on the MotoGP grid: four Yamahas and two Suzukis, against 16 V4s.

There are various reasons why inline-fours reigned supreme at Misano – here are three of the main reasons.

Firstly, Misano’s super-grippy new asphalt allowed the Yamahas and Suzukis to exploit the natural corner-speed advantage of the inline-four configuration.

Secondly, Michelin’s grippier 2020 rear slick – with slightly softer carcass – prefers the smoother cornering arc of an inline-four against the more aggressive in-out of a V4 and further helps the inline-four on the edge of the tyre.

Finally, the resurfaced Italian track is incredibly bumpy, “similar to a motocross track”, said Fabio Quartararo at the weekend. 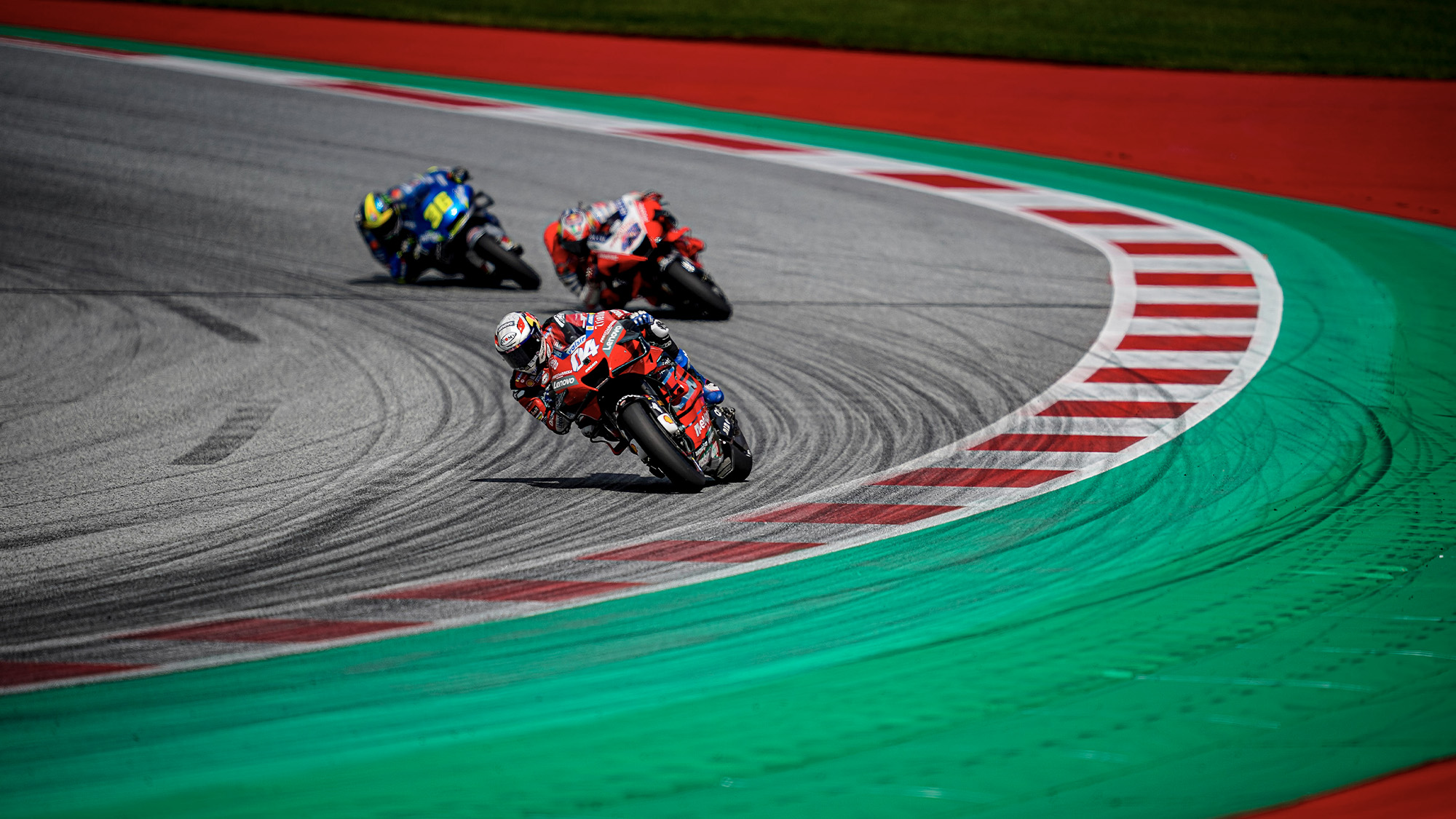 The physics of rotational force make an inline-four more stable than a V4 over the bumps so that Yamaha and Suzuki riders can attack corners faster and do so without fighting their bikes so much and exhausting themselves over race distance.

Honda RC213V rider Cal Crutchlow immediately noticed the difference when he watched Saturday morning practice from trackside after he had been declared unfit to ride, due to post-surgery complications

“The Yamaha and Suzuki seem to go over the bumps more smoothly than the other bikes,” he said.

This blog has already explained why inline-four MotoGP bikes are friendlier through the corners than V4s, but here’s a quick recap, specifically related to the bumps at Misano.

The secret goes to the absolute heart of every MotoGP bike – its crankshaft, which has a significant effect of the behaviour of the motorcycle. MotoGP crankshafts weigh around nine or ten kilos and they rotate at around 18,000rpm, so that’s a huge amount of kinetic energy!

When a bike rides over bumps it can become unstable. However, the wider crankshaft of an inline-four engine has a higher moment of inertia, which makes it more resistant to external forces – like bumps or slides – that want to upset the bike.

On the other hand, a V4 engine’s shorter crankshaft has a lower moment of inertia, so that bumps and slides make the bike twitchier and more unstable.

Thus when a Yamaha or Suzuki encounters a series of bumps it rides over them much better than a V4, which gets twitchy at best, terrifying at worst.

“It’s pretty damn simple,” one V4 engineer told me recently. “We say that if the rider’s arse is open, his hand is closed!”

Rossi, who came within three-tenths of a second of scoring his 200th MotoGP podium on Sunday, really enjoyed the friendliness of his inline-four.

“This is a very tricky track – very narrow and very bumpy – but our bike is very stable, so we can enter corners fast, especially the fast corners,” he said, referring to Misano’s super-quick Turns 11 and 12, which can make a huge difference to lap times.

Michelin’s 2020 rear slick continues to help the inline-fours and hinder the V4s, thus shifting the balance of power in MotoGP, because the company’s older, harder-construction rear sick mostly favoured the V4s. 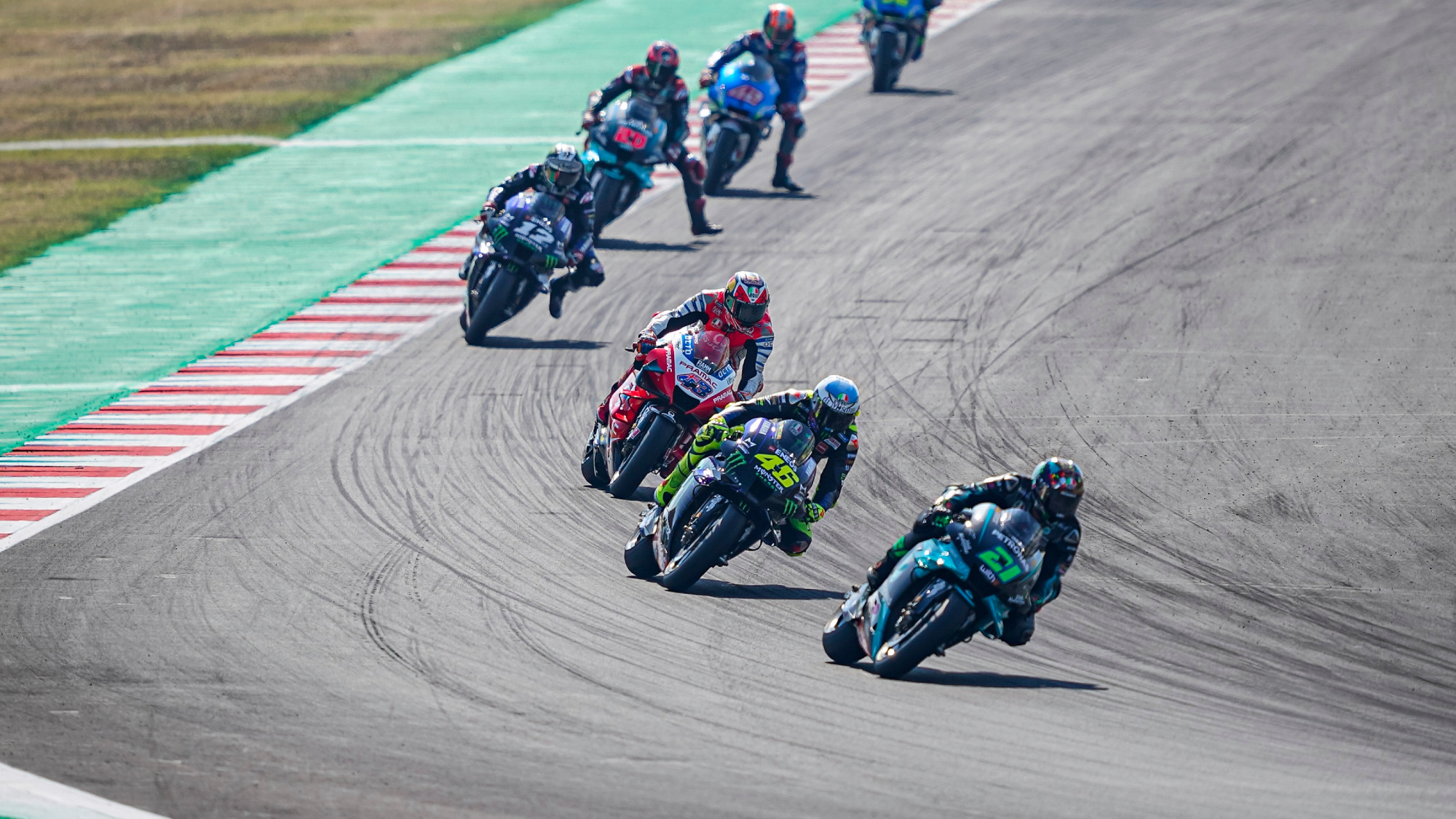 Inline-fours to the fore at Misano: four Yamahas, two Suzukis, one Ducati

“The new tyre is no problem at all for us – it’s just better everywhere,” smiled Petronas Yamaha team manager Wilco Zeelenberg at Misano. “It’s easier and it gives us the edge grip we need.

The same goes for Suzuki.

“I’ve heard comments from some [V4] manufacturers, but the only difference for us with the new rear tyre is that we have a bit more grip and consistency,” said Suzuki technical manager Ken Kawauchi at Misano.

The situation is very different at Ducati, which despite everything leads the riders championship with Andrea Dovizioso.

“At the moment it’s very difficult for Andrea to ride the bike like he did in the last few years, when he slid the rear in the entry of the corner to turn the bike,” said factory Ducati team manager Davide Tardozzi. “The grip of the new tyre is incredible and more grip is always welcome, but sometimes it can create problems, so Andrea cannot slide the bike to make the turn. But everyone has the same tyres, so it is our job to find the solution.”

The tyre’s softer carcass seems to work better with inline-four bikes because their crankshaft dynamics allow them to use smoother cornering lines, so they load the tyre more consistently through the corners. On the other hand, the dynamics of a V4’s shorter crankshaft demands the V4 rider uses more acute lines, which load the tyre more aggressively in some parts of the corner, causing the tyre to deflect (squish) too much.

Pramac Ducati rider Jack Miller – currently third in the points chase behind Dovizioso and Quartararo – also has his difficulties with the tyre. At Misano he had issues, in practice and in the race, when he ignored his gut instinct and raced the soft rear instead of the medium, following advice from his technicians. 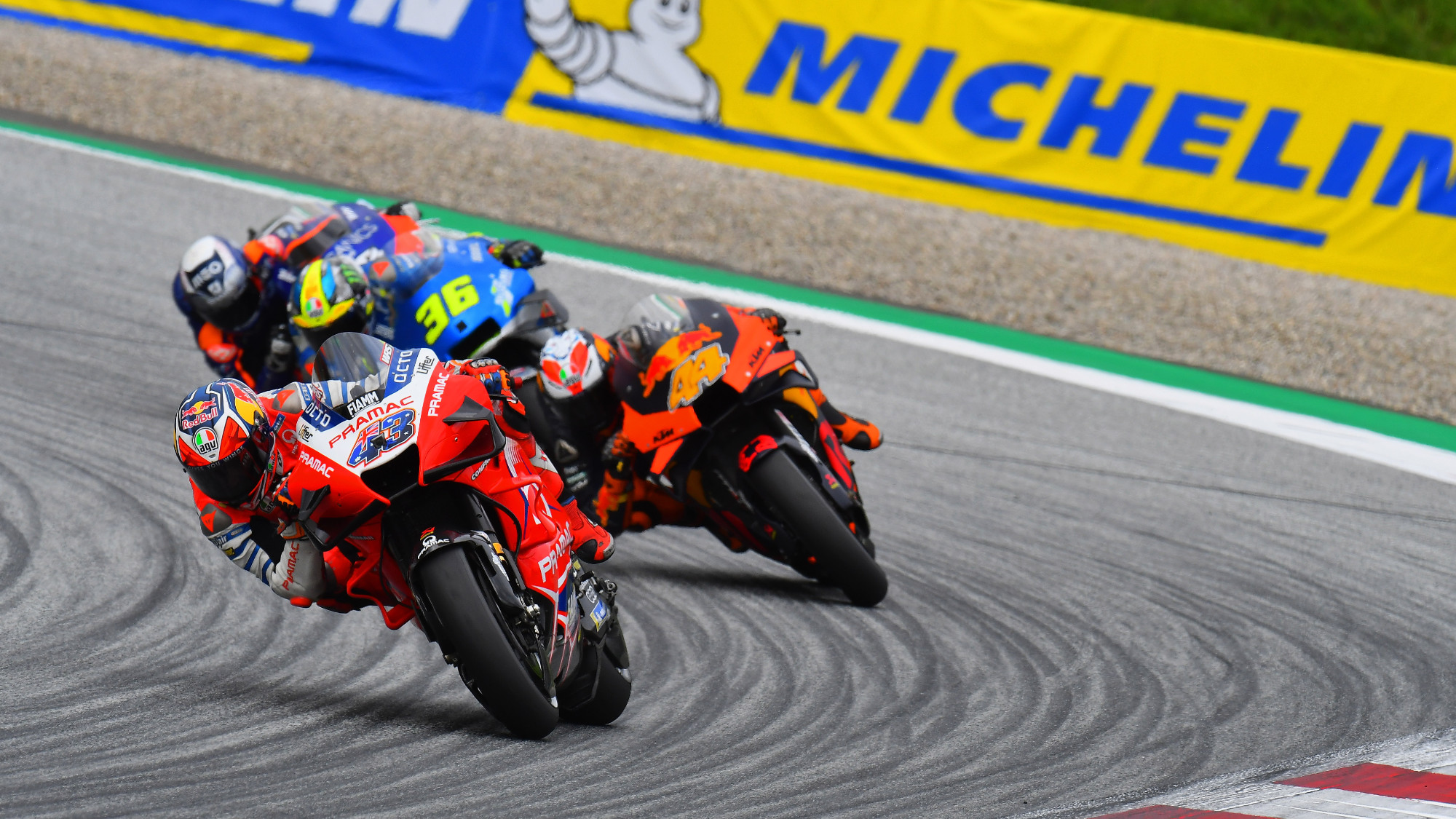 Why MotoGP records don’t get smashed any more

Michelin is in its fifth season as MotoGP’s sole tyre supplier and yet only holds just over half the comparable race records. The rest belong to Bridgestone, which supplied the…

“Between Turns One and Two and Two and Three I was being a bit too aggressive with the throttle,” said the Australian on Saturday. “So I tried to adapt and carry more corner speed the whole way through the corner, but even at full lean angle it tried to highside me – off gas, off brakes, just rolling. It feels like the edge of the tyre is too soft, so it’s changing shape, like it’s rolling off the edge.”

Of course, Bagnaia didn’t seem to have any of these problems, perhaps because he rides his Desmosedici more on the front than do Miller and Dovizioso. Also, the former Moto2 champ spends a lot of time at Misano – aboard a Panigale V4R – riding alongside other members of the VR46 Academy.

“We know everything about this track,” said the 23-year-old Italian after scoring his first MotoGP podium after a month off with a broken leg. “This helps us a lot to know where the bumps are – and with the Desmosedici the bumps feel less than with the Panigale.”

Most riders complained loudest about the bumps on Friday, because after FP1 and FP2 their crews went to work to radically change set-up. Standard practice up and down pit lane was to lower ride height, to reduce pitching over the bumps, and open up suspension damping.

The less stable V4s needed the biggest changes, to improve stability, but this had a negative effect on steering and manoeuvrability because whenever you improve one area of performance you nearly always spoil another area

“Going lower with the bike was the biggest step we made,” said Miller. “We dropped the bike near on nine millimetres, which is quite a big step. The bike was doing a bit too much pitching, especially through the changes of direction, so we had to slow that down, and lowering the centre of gravity helped with that. At the same time we tried to keep the wheelbase similar to usual to try and help the turning. Also we opened up the front and rear damping a lot to get the bike to float a bit more over the bumps.”

No doubt Miller and Dovizioso will be having a long and hard look at Bagnaia’s data as you are reading this.