I have no words after watching an old man win in the riskiest of conditions, but that wouldn’t make much of a blog… 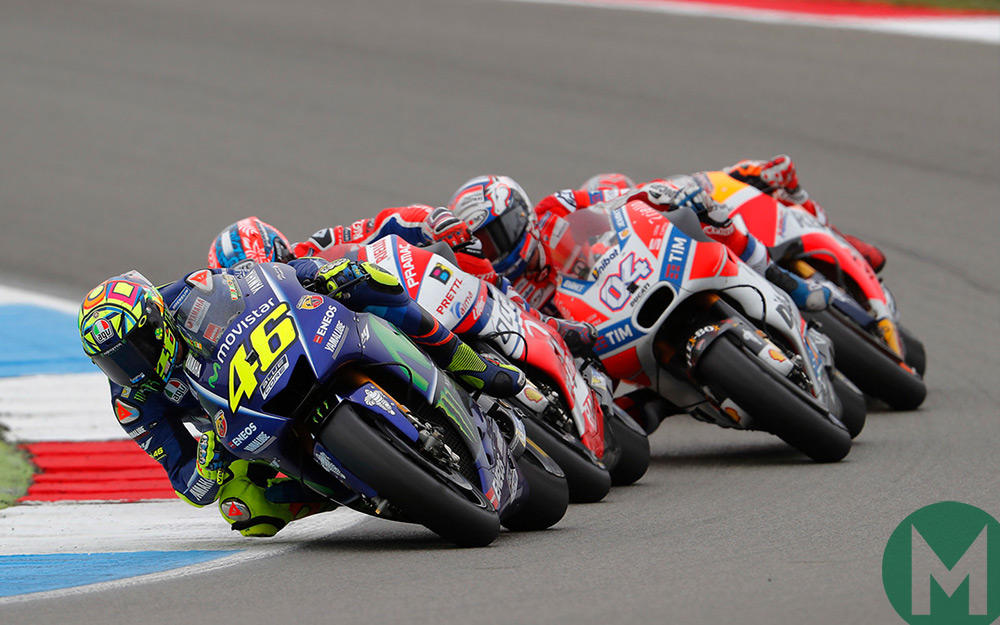 In October 2011 a photographer and I flew to Bergamo, Italy, for an audience with 15-time world champion Giacomo Agostini. Ago and his wife Maria welcomed us into their home and ushered us straight to the dining table: it was lunchtime. Lunch was served by the family butler – dressed all in white – and the world’s most successful motorcycle racer was his usual charming self.

The reason for the visit was simple. For many years the racing world had been wondering if Valentino Rossi would one day eclipse Ago’s record of 122 Grand Prix victories. By the end of his first miserable season at Ducati, there was a lot less wondering.

I’ll raise my hand and admit that I thought Rossi was already done, that his time as a winner was over. I presumed that a second dismal season on the Desmosedici – by then it was already obvious there was little chance of a miracle in Bologna in 2012 – would have him drifting into luxurious retirement. The headline to my Agostini interview was ‘The only guy Rossi won’t beat’.

Rossi’s Dutch TT win was his 115th Grand Prix win, so Ago’s record is still a long way off and may forever be out of reach. But let’s not worry about that right now.

Assen wasn’t an ordinary win, which would’ve been remarkable enough. It was victory in the scariest, most treacherous conditions: slick tyres in the drizzle, riding around one of MotoGP’s fastest tracks, which only the previous day had proved ice-like in the rain, claiming no less than 32 Moto3 victims in just two sessions.

These are the kind of risky, dangerous conditions that should suit keen, young riders, those who haven’t yet become accustomed to the taste of hospital food, rather than wizened, creaky veterans.

Racing on a damp track on slicks is fine, for a while. If you keep riding at full speed the tyres stay hot enough to keep gripping, with a little luck. But as soon as you back off even a fraction, tyre temperature drops and grip decreases. Then comes that horrible moment when the tyres reach critical temperature, when all of a sudden they cease to grip at all. One second you’re riding around on damp asphalt, the next you’re on ice. And the moment the front goes, with no warning, it’s not coming back; which would be especially unpleasant heading into 140mph Meeuwenmeer or 130mph Ramshoek.

Rossi, Danilo Petrucci, Marc Márquez and the rest didn’t know when that moment might come. Most of them backed off, like anyone sensible would. Even Márquez backed off. Others decided the track was too perilous to continue riding a 250-horsepower motorcycle on slicks, so they switched to their second bikes equipped with full-rain tyres. Even Johann Zarco, not unknown for his bravery, admitted he was scared. Only two riders resolved to keep going as close to full speed as they dared, shifting the risk and the fear into some dark recess of their minds.

One of them had never won a Grand Prix in his life, so he pretty much had nothing lose, apart from the obvious. The other had won 114 Grands Prix and would have ended his hopes of a 10 world title if he had crashed out, so he had everything to lose.

Once again Rossi summoned his inner 19-year-old; the same fearless teenager that appears whenever he has the scent of a kill in his nostrils, the same 19-year-old he summoned at Assen in 1999, when he fought Loris Capirossi for the 250 win. (Okay, so he had celebrated his 20th birthday a few months earlier).

“That sometimes happens,” he told me years back. “You stop with the right lines and just fight, like remove one chip from your brain and put in another. At Assen it was me against Capirossi, and f**k, I lost!” By 0.180secs.

Again, Sunday’s win was madder than Assen 1999. When you’re riding slicks on a dry track, you know the limit. When you’re riding rain tyres on a wet track, you know the limit. But when drizzle is falling here and there, you’ve not got a clue. Is it raining harder at the next corner than the last lap, so should I slow down? Or is the track drier than last time, so should I go faster? The rider simply doesn’t know until he gets there, so Sunday’s race was roulette, even Russian roulette.

Rossi makes the media sound like a stuck record: every time he has won a race since his 2013 renaissance we go through this perfectly reasonable process of adulation and we wonder how long this remarkable career can continue.

Of course, it’s pointless trying to divine his future because no mere mortal can even hazard a guess as to what’s going on inside Rossi’s brain. And you cannot use other sportsmen for comparison because he is unique, especially among bike racers, because this is a cruel, vicious sport that destroys minds and bodies.

On Sunday it was 20 years and 313 days since Rossi’s first GP win at Brno on August 18th 1996. On that day Bill Clinton was President of the USA, John Major was Prime Minister of the UK and Boris Yeltsin was President of Russia.

And now, the next question: the championship. Rossi’s first win since Barcelona last June puts him in the thick of the title fight: seven points behind leader Andrea Dovizioso, three behind Assen crasher Maverick Viñales and four ahead of Márquez. Since Grand Prix racing began in 1949 there has never been a more tightly packed top four at half-distance of a premier-class season.

His Assen victory was his first time on the podium since COTA in April, so he’s not been as successful or as consistent as he was in the first half of 2014, 2015 and 2016, which is why his title chances were fading until Sunday. His saviour has been other riders’ mistakes: both Márquez and Viñales have crashed out of two races, while Rossi crashed out at Le Mans. Dovizioso has also crashed out once, in Argentina, but not through his own fault; he was taken out by Aleix Espargaró. So far Dovizioso is the most consistent of all the top riders, which is why he leads the points chase.

How to judge the next 10 races? It’s pretty much impossible, because tyre performance is too unpredictable: they suit one bike and rider one weekend and another bike and rider the next.

What we do know is that Rossi’s new/old chassis, which he raced for the first time at Assen, does solve some of the problems that had hampered him at earlier races. The latest spec loads the tyres more effectively into and out of corners, so Rossi’s crew can give him a better combination of tyre performance and endurance.

In reality, anything could happen…