I don’t know about you but I get pre-race butterflies whenever a MotoGP season draws towards its climax. I know it’s ridiculous, because I’m sat comfortably where no harm can come to me, but I’m nervous for what might happen, for what might go wrong.

Perhaps it’s some kind of nervy leftover from racing all those decades ago. For those that haven’t raced it’s probably difficult to imagine what racers feel like on Sunday mornings. There’s so much adrenaline pumping around your body that you sometimes feel sick and faint, so you’re just dying for the race to start, so you can stop feeling so rank.

Different riders have different ways of dealing with those feelings, but I can’t even begin to imagine how MotoGP riders cope with the stress and pressure of battling for the championship. That’s another level altogether.

On the other hand, I’m reminded of the wise words of Australian cricketer and wartime pilot Keith Miller, who was asked by famed broadcaster Michael Parkinson how he dealt with the stresses and pressures of playing for his country.

“Listen, mate, a Messerschmitt up your arse is stress, this is just a f***ing game,” replied Miller, who had flown Mosquito fighter-bombers during the Second World War.

Of course, motorcycle racing is much more dangerous than cricket. The stresses and fears are very real, so it’s like going into battle when you engage first gear and charge towards the first corner.

In recent weeks many people have commented on the chilled demeanour of MotoGP title leader Joan Mir. The 23-year-old seems entirely untroubled by carrying the weight of the world championship on his shoulders. After scoring his first MotoGP victory at Valencia he was very eloquent and humble in explaining how he sees the situation. 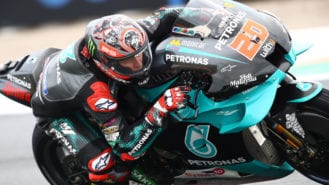 “For sure we have pressure here – we are playing with our lives, so we have to be really, really focused on what we do, but in the end it’s our job,” he said. “I think this is real pressure but for me it’s good pressure. If I win the title this year it will be super-good, but if I don’t it will also be good. Because of the coronavirus there are people that can’t pay the rent and put food on the table. This is real pressure and not good pressure. When I hear questions about pressure and all of this I say, ‘I don’t have pressure’. This is my job, so I’m privileged.”

Mir’s Valencia success – three months after his first MotoGP podium – made him the fifth first-time MotoGP winner of 2020. This is a first – there have never been five new winners before in a season (except of course in 1949).

The Grand Prix of Europe was Mir’s first time on top of a podium since he won the 2017 Moto3 world championship when he won ten races. The only other riders that have got close to that total since the Moto3 class was created in 2012 are Brad Binder and Jorge Martin, who each won seven races, in 2016 and 2018. That gives you some idea of Mir’s talent and strategic nous.

Mir was masterful on Sunday, taking advantage of team-mate Álex Rins’ only error, when the Aragon GP winner made the mistake of taking fourth gear through the high-speed Turn Ten, which ran him wide and lost him speed, so he had to go all the way down to first for Turn 11.

From there Mir pushed like hell, skating on the brink to find a few more tenths per lap to break his team-mate. Which must’ve felt good because they’re certainly not matey team-mates.

He had his GSX-RR skittering around, smearing rubber on the asphalt. Perhaps it looked like he was taking unnecessary risks – because a second-place finish would also have been an excellent point haul – but he wasn’t. The Suzuki was in its sweet spot and he was in that golden zone where you correct a slide before you even have it, because you know what the bike’s going to do before it does it. And anyway, in this era of weird tyres and weird races it can be a big mistake to ease off and lose temperature in your tyres.

Mir’s secret this year has been consistency, during a season in which consistency has been impossible for everyone else, mostly due to the Covid-disrupted championship and Michelin’s 2020 rear slick, which still has many engineers scratching their heads.

It’s important to understand that Mir’s ability to deal with pressure – thus far, anyway – is as crucial as his skills when he’s on the bike. One ability isn’t much use without the other. Look at Maverick Viñales – perhaps as talented as Mir but without the mental capacity to keep it all together when it matters most.

Who knows how Mir does it? He’s very bright, he doesn’t seem to get worked up about anything and he knows how to turn pressure into a positive. And perhaps he’s naturally good at relaxing, at not letting all the static cloud his thought processes. Top racers have so much going on during race weekends that they need to compartmentalise, so they can retain the maximum mental bandwidth for riding the bike.

Not all MotoGP greats prepare for battle by chilling out. Three-times 500cc world champion Wayne Rainey sometimes used a frenzied pre-race ritual, which shines a light on the scary levels of aggression that burn deep inside these people.

“As my career went on I was just waiting for Sunday,” recalls the American who won the title in 1990, 1991 and 1992. “Friday and Saturday were a waste of time; I was always building to Sunday.

“I had a little ritual before the race, if you want to call it that, or a routine, that would get me into the right state of mind. I’d get myself into this once a weekend. I’d be dancing around my motorhome, kicking my leathers. Or I’d sit there, focusing on the feeling of being excited and wanting to spit nails and rip the handlebars off the bike. It was like going out to fight. 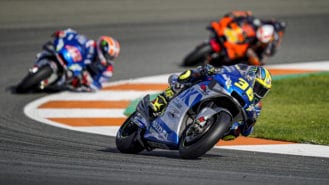 “The music depended on the mood I was in, maybe a bit of country, or it could’ve been pop or rock ’n’ roll. It was never the same, but when I left the motorhome I was always ready.

“If people had come into the motorhome at that moment they’d have thought I was nuts. They’d have said, ‘man, you better take a break!’. I always looked forward to the preparation, it was one reason I raced. Basically I’d think about the race completely, so when I got on the bike I was pretty relaxed. It was much more intense getting ready. I enjoyed that part of my career – those one or two hours before the race by myself. It was very intense and very exciting. But it was also a lot of work, a lot of commitment, a lot of dedication and desire. You give up a whole lot for that.”

Rainey, Mir, all top riders use the psychological process of visualisation to help them rehearse the upcoming race. Rainey’s mentor ‘King’ Kenny Roberts was one of the first to use this cognitive process.

The American legend’s team doctor Dean Miller recalls Roberts’ racing comeback, at the Suzuka Eight Hours in 1985, almost two years after he had retired at the end of the 1983 grand prix season. That weekend was the genesis of Yamaha’s first serious four-stroke road-racing programme, which is why the factory’s FZR750 was dubbed Genesis. That bike was the great-great-great-grandfather of Yamaha’s current YZR-M1.

“We were struggling about a second and a half off pole,” recounts Miller. “So Saturday lunchtime Kenny says, ‘let’s go back to the hotel’. He told me not to let anyone knock on the door, he didn’t want anyone bothering him. So he’s lying flat on the bed, doing lap after lap after lap in his head for about 50 minutes. Then he gets up and says, ‘I’ve found it, I’ve found half a second here and a second there’. We go back over to the track and he qualifies on pole, just like that. Kenny could visualise better than anyone.”

Mir only needs a podium from Sunday’s second Valencia race to wrap up the 2020 MotoGP title. Will he push hard to get it over and done with or will he be happy to wait for the season finale at Portimao on November 22?