Ten years ago I interviewed revered Formula 1 engineer John Barnard about what he would do to MotoGP design, given a big, fat, F1-style budget. The man who introduced the carbon-fibre composite chassis and semi-automatic gearbox to F1 had recently completed several years working on ‘King’ Kenny Roberts’ MotoGP project, where he never had the resources to explore the areas of performance he wanted to explore.

MotoGP aerodynamics was an area that particularly fascinated him because the science was so advanced in F1 but at that time had hardly been touched upon in bikes.

F1 cars get much of their staggering corner speed from aerodynamic downforce, sometimes called ground effect, which uses low pressure between car and racetrack to suck the car into the asphalt, generating massive amounts of grip.

Barnard was already wondering if he could use ground effect to create more grip in MotoGP.

“A racing motorcycle is more like a jetfighter than a car”

“When you’re talking about 60 degrees of lean you’ve got a lot of fairing close to the ground, so what’s that doing and what could it do is a big question,” he said.

I thought this was somewhat fanciful, because a section of bodywork on a two-wheel vehicle could hardly be more different than the underside of a four-wheel vehicle. Then I remembered chatting with Team Roberts engineers Mike Sinclair and Warren Willing in the 1990s. I asked the pair – two of the brightest minds in motorcycle racing at the time – if motorcycle traction control would one day be as clever as F1 traction control.

No, they said: motorcycles are much more complicated than cars because they lean, pitch and yaw, plus the size and shape of the tyre contact patch constantly changes, sometimes the front wheel is in the air, sometimes the rear wheel in the air and so on. Willing told me, “A racing motorcycle is more like a jetfighter than a car”.

In the end science proved Sinclair and Willing to be wrong. So perhaps ground effect can be made to work on MotoGP bikes, creating more grip for faster corner speeds and faster lap times.

The new aero Ducati unveiled in Qatar at the weekend suggests that Ducati is now exploring other areas of aerodynamics. The big question is this: is Ducati chasing ground effect to increase cornering grip? 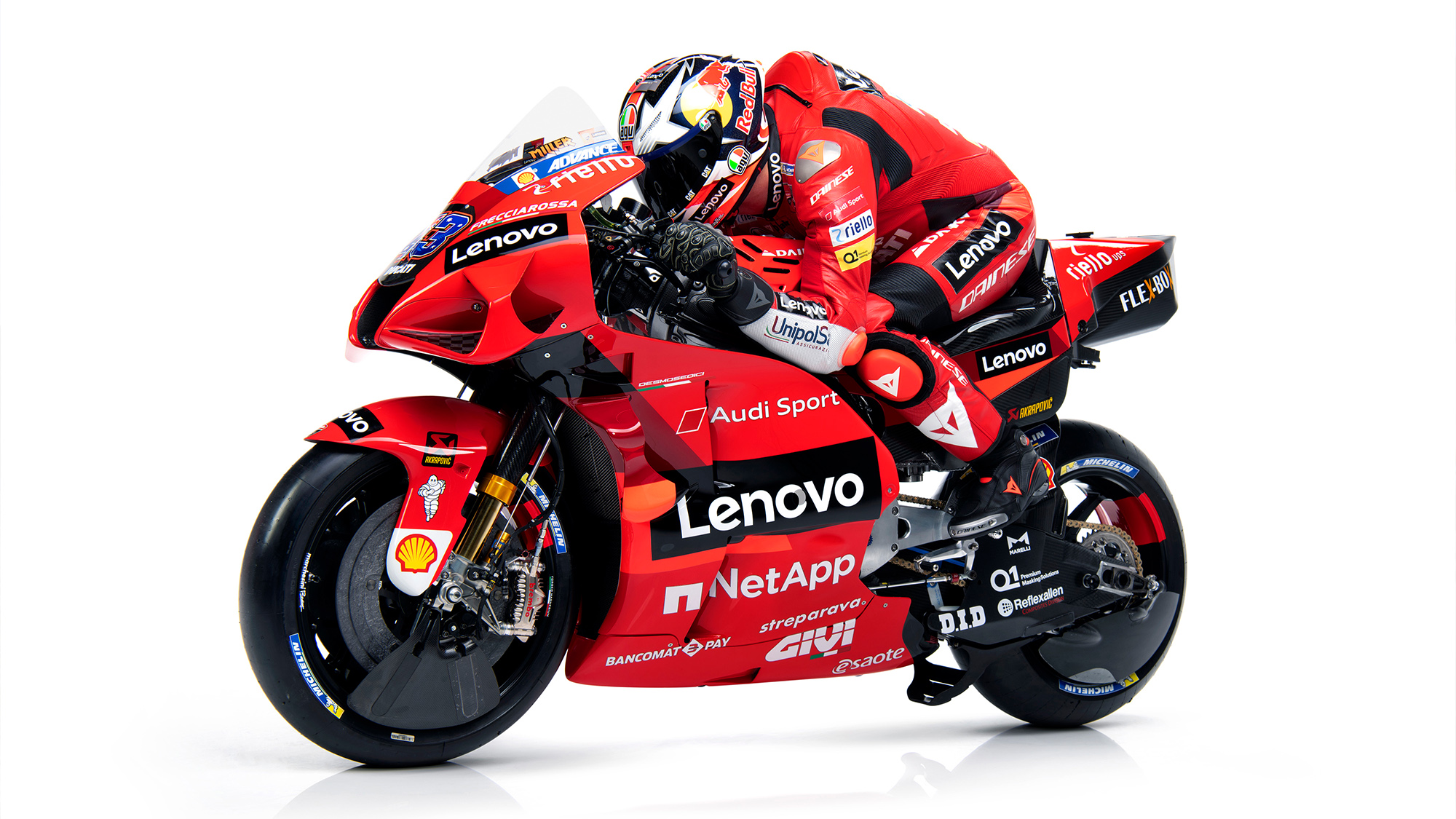 In fact, motorcycle racer and Formula 1 aerodynamicist Ali Rowland-Rouse believes Ducati has been using ground effect since 2019, when it first attached wheel covers to the lower area of the Desmosedici’s wheels.

“The wheel covers do two things,” says Rowland-Rouse. “First, they clean up the airflow around the wheel in a straight line. Second, they are downforce-at-lean-angle devices, because when you’ve got a flat surface near the ground at speed, with air passing between the two, you lower the pressure between them and you end up with downforce.”

“Most MotoGP aero is designed to produce downforce when the bike is upright. Once you go over 45 degrees of lean you have more side-force than downforce, which increases the lateral acceleration through the corner, which is what the tyres are fighting against, so these wheel covers are downforce devices that create suction when the bike is leaned over.

Ducati didn’t use its wheel covers during the Qatar tests, but neither did they during last year’s preseason tests at the track and neither did they use them at Phillip Island in 2019, another windy MotoGP venue. Instead test rider Michele Pirro and 2021 factory riders Jack Miller and Pecco Bagnaia tested a new aero feature in the Desmosedici’s lower fairing, something never seen before in MotoGP.

Miller revealed on Sunday night that the new aero does indeed make the bike seem more stable, which suggests that Ducati is indeed working in this area.

However, Rowland-Rouse thinks the downwash ducts may have a greater effect on several other performance factors.

“The next thing is that the airflow beneath a motorcycle fairing at high speed is a mess. The front wheel creates a lot of wake, which creates turbulent, low-pressure air beneath the bike and a wash at the back of the bike, like a truck. All this creates a lot of drag. So this downwash duct fires air beneath the bike to increase air pressure in that area, which reduces drag.

“This has two effects. Not only does it reduce drag to increase straight-line speed it also cleans up the airflow at the back of the bike, which makes it more difficult for riders to get a free tow from the Ducati.

“It looks to me like the overall design of the bike’s bodywork is sleeker than it’s been for a while, so instead of focusing on downforce like in recent seasons they’re cleaning things up, to reduce drag and increase top speed.” 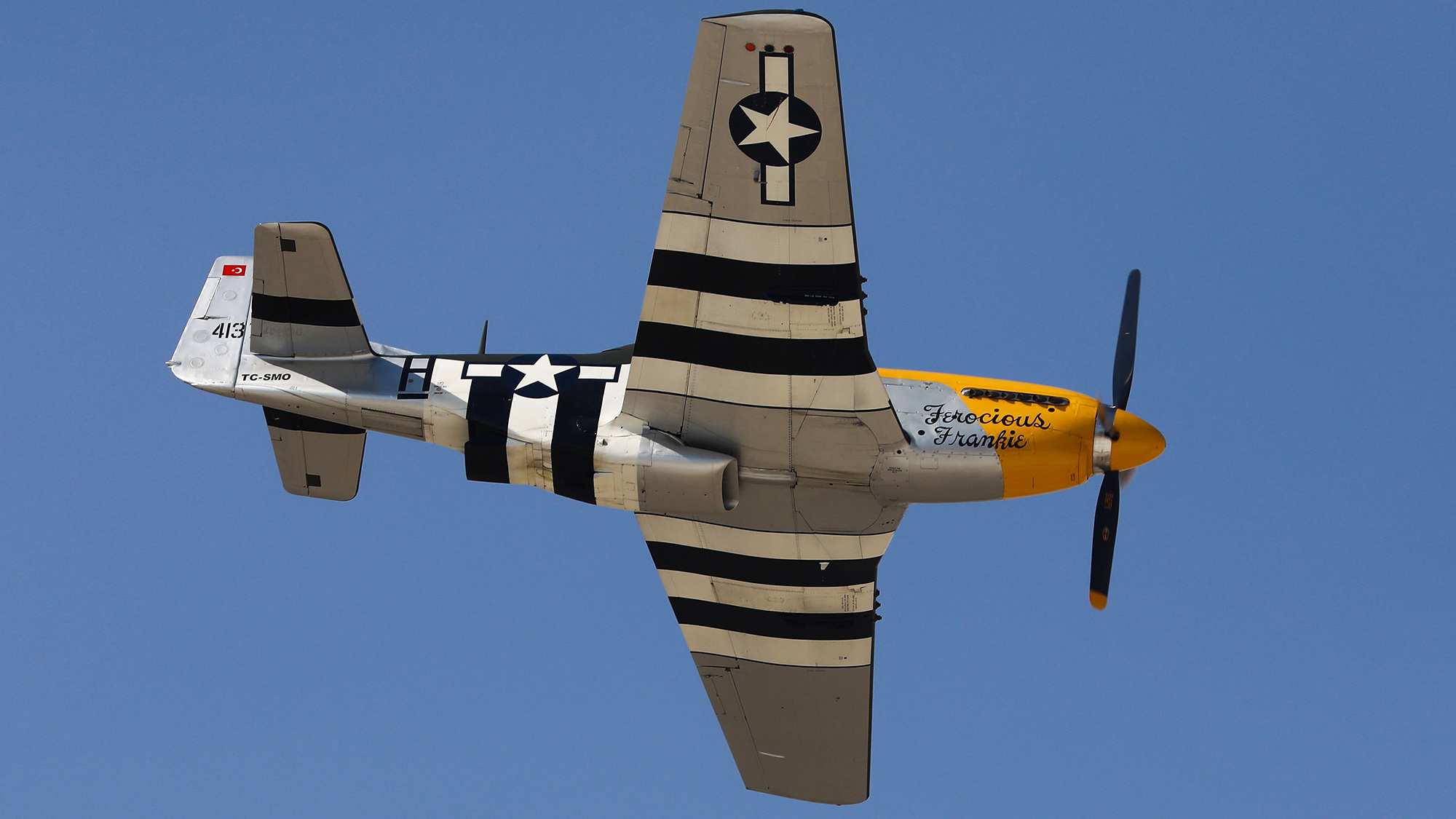 Could the P-51 Mustang’s under-fuselage radiator design be recreated in a MotoGP bike?

Will Ducati’s latest aero designs encourage more protests from rival manufacturers? We don’t know yet, because the factory has yet to homologate the kit. Engineers will either homologate the downwash ducts for the first race or further refine the design back in Bologna.

What we do know is that Ducati is the only MotoGP manufacturer that wants to continue aero development at the current rate. Two years ago – after the controversy over Ducati’s so-called rear-tyre cooler – I interviewed engineers from all six factories. Dall’Igna was keen to increase aero knowledge, while Aprilia, Honda, Suzuki and Yamaha all agreed they didn’t want aero development to continue at such a pace, while KTM wanted all aero devices banned.

“Our opinion is that we want to develop technology that can be transferred to streetbikes, which is why extreme aerodynamics is not the right way to go,” HRC technical manager Takeo Yokoyama told me. 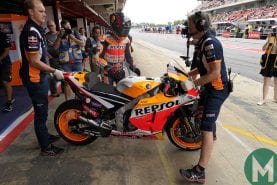 What’s the story behind the fuel-tank wings appearing on MotoGP bikes? It’s all about the extra grip offered by the latest aerodynamics Photo: Mat Oxley MotoGP riders pull 1.7g on…

“As a technician I like aero, but I would keep things as they are now, with clearer rules,” he said at the time. “The perfect thing would be to have some aero development without an explosion of costs, but this would require an expert in aerodynamics to manage the rules, so maybe MotoGP needs an aero adviser, perhaps from Formula 1.”

Of course this doesn’t stop Albesiano from dreaming. The former Cagiva 500 chassis designer is keen to introduce the Meredith effect to MotoGP. This phenomenon – discovered by British engineer Frederick Meredith in the 1930s – uses careful design of the cooling system to use heat produced by the radiator to create thrust, because heat adds energy to the airflow.

Most famously this effect was used in the Second World War P-51 Mustang fighter, with heated air exiting the radiator generating a slight amount of thrust. More recently the phenomenon has been used in Formula 1 cars, with radiators mounted in sidepod tunnels.

Providing adequate cooling for racing engines is a huge issue, because the larger the radiator the greater the drag. So if you can use kinetic energy from the radiator’s heat to offset that drag it’s an important gain. But whereas a car has room for radiator tunnels a MotoGP bike doesn’t; certainly not in a conventional configuration.