At the moment the stupidest question you can ask any knowledgeable paddock person is this: “Is Pedro Acosta the next Marc Márquez?”.

The only answer you will get is a roll of the eyes or an “Oh, come on, man…”.

Or in Fabio Quartararo’s case, “Guys, Pedro is only 16! He just needs to enjoy what he’s doing and not worry about his future. It’s too early to think about anything else”.

Of all people, Quartararo should know. When the 15-year-old French kid arrived in the paddock back in 2015 he had already been hailed as the next Márquez. His career bombed and he very nearly disappeared from the paddock until he turned things around in 2018 with his first grand prix win.

Acosta has had a slightly different start to his GP career: three wins and a second place from his first four world championship races. No one else – not even Valentino Rossi, Mike Hailwood or ‘King’ Kenny Roberts – has managed such a feat since the start of world championship racing four years after the end of the Second World War.

“Pedro has something different – we’ve never seen someone like this,” said Petronas Yamaha rider Franco Morbidelli at Jerez. “What we see from him is something else, this is clear. He is 16 but he doesn’t look 16. He looks like a really focused guy who’s not here to play too much.”

“How Pedro really controls the bike in this entry moment is incredible, this is the difference”

The reason that people who know how racing works don’t want to acclaim Acosta as the next Márquez is because that’s not how racing works. Acosta is still a kid, maturing mentally and physically, so no one knows where he is on his development curve.

He certainly has an aura of genius around him, because merely surviving the chaos of four Moto3 races takes a lot of talent, nous and luck, but to finish a close second in the first and win the other three is mind-boggling.

Acosta’s current boss is wily old Red Bull KTM Ajo team owner Aki Ajo, who has seen it all. Márquez, Jack Miller, Brad Binder, Miguel Oliveira, Johann Zarco and many others have passed through Ajo’s Moto2 and Moto3 garages over the past two decades. This year he has Jaume Masia alongside Acosta in Moto3 and Remy Gardner and Raul Fernandez in Moto2. And of course, he still manages Miller, winner of Sunday’s MotoGP race at Jerez a few hours after Acosta had secured his Moto3 hat-trick. 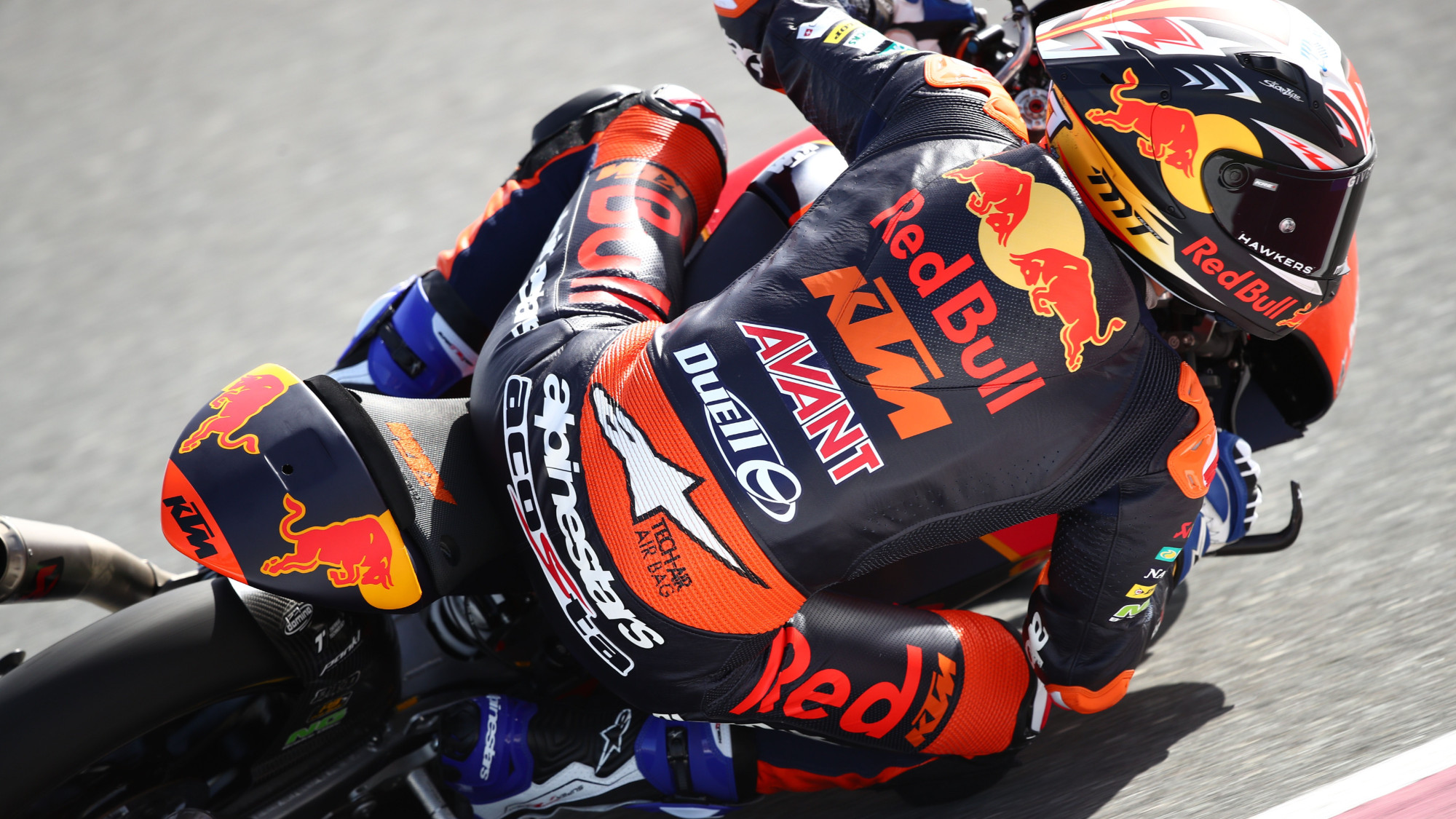 “It’s always difficult to compare because everyone has a different character,” said Ajo at Jerez. “Of course Pedro is a really great talent. What I really like is his attitude – he has a really open and relaxed attitude. He respects everyone but he thinks we are all human. He doesn’t think any of these guys winning races are gods. And he trusts that if he does his job and he has enough talent that he can do the same.

“How he handles and controls the bike, especially the front end, is incredible. He’s got a new-generation riding style. Now in GP racing you make the difference in corner entry, not in the exit or in the middle of the corner. For me, this new style is a bit similar across all the categories.

“Of course you still need to be very strong in braking, but the braking and turning into the corner is the key to everything – to keeping your corner speed, to having a good exit, everything. How Pedro really controls the bike in this entry moment is incredible, this is the difference. 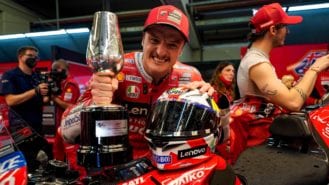 “I think it comes naturally to him. You can see that he plays with the bike a lot. If he goes wide or onto the kerb he pushes the bike with his body to get extra turning and banking.”

But it’s not only his riding style – it’s more his character and his attitude and the combination of the three.

Acosta’s father is a fisherman, working off Spain’s Murcia coast. The family isn’t rich. Indeed the only way they could afford their son’s first set of leathers was by getting family and friends to chip in some money.

“Pedro comes from a hardworking family and he has a good attitude to work,” added Ajo. “When he joined my team he said, ‘Aki, I really understand how lucky I am to be here, so if I have this opportunity I never want to lose this opportunity, so I will sacrifice everything for it’. This is a great attitude for a young guy.

“Let’s say that a lot of kids think about many different things that we didn’t think about when we were young, like social media and so on, which gives unnecessary pressure to young people. If you aren’t interested in these things then your head is much freer. Jack, Remy and Pedro are good examples of this.”

Acosta’s early 2021 results are historic, just like his early 2020 results were historic when he became the first rider to win the opening six races of a Red Bull Rookies season. A few months later he secured the title, his first major success. 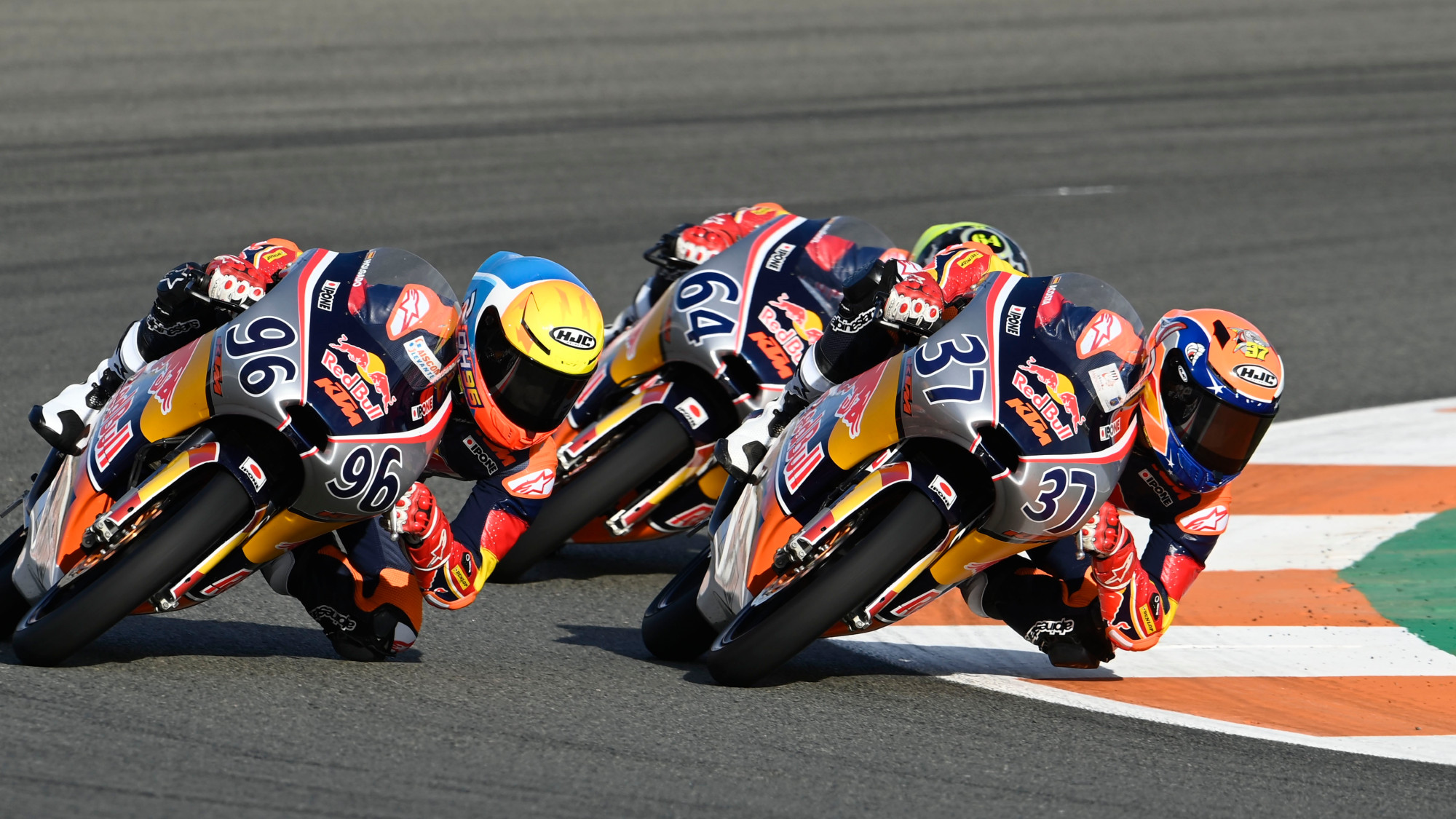 “What we’ve learned with the Rookies Cup is that different riders mature at different times,” says former racer and journalist Peter Clifford, who helps run the series. “Pedro matured a lot in his two years with us, but we’ve had riders who did the same, but didn’t continue that trajectory, or flattened out and then got going again. Pedro is obviously continuing his trajectory.

“One of the salient points about Pedro is that when he came to the Rookies Cup in 2019 he had nothing else. Some guys also race in the CEV championship or whatever, but his family didn’t have the money, sponsors or a team, so the Rookies was it. There was an advantage to that in that he knew he absolutely had to make it in the Rookies.

“Pedro is certainly a thinker, but there are plenty of riders who are thinkers who think themselves to a standstill by over-thinking. Maybe they think so much about the bike that when something isn’t quite right they can’t ride around it.

“In the Rookies Cup Pedro developed a system in which he didn’t chase the motorcycle all through practice, trying to make it perfect because he knew that at some point in the race the bike wouldn’t be perfect – when the tyres are cold, when the tyres go off or whatever. So he realised there was no point spending all his time super-fine-tuning the bike because he knew there’d be times when it wasn’t right. He really made that work for him.”

Acosta was born in May 2004 and his favourite rider is 1993 500cc world champion Kevin Schwantz, who retired in 1995. His dad is a huge Schwantz fan, so the youngster spent his early years watching videos of the American doing battle in 500 GPs, rather than Valentino Rossi and the rest in MotoGP.

When will Acosta make it into MotoGP? He celebrates his 17th birthday later this month and because MotoGP’s minimum age limit is 18 the first season he could ride in the premier class is 2023.

Current MotoGP points leader Pecco Bagnaia thinks even that is too early because despite Acosta’s speed he has very little experience.

“The best way is to do two years in each category – Moto3, then Moto2,” said Bagnaia at Jerez. “You need to get experience to learn and to grow. For me it’s better to wait a bit and not put too much pressure on him, because we often see that when riders have too much pressure they can lose their way.”

In other words, enjoy Acosta’s brilliance but turn down the hype. The kid still has a long, long way to go, most likely into Ajo’s Moto2 team next and then KTM’s MotoGP team, if he continues doing what he’s doing.