Smell is the most evocative of all the senses, which is why I’m immediately dragged back to my schooldays – in a wibbly-wobbly movie memory kind of a way – upon entering the cavernous Red Bull Rookies awning within the MotoGP paddock. The atmosphere is thick with that bitter, nose-puckering stench I remember permeating the locker room after each mean and downright vicious game of rugby I played in my teens. Except that in Red Bull Rookies world the reek of teenage sweat and testosterone is turbocharged with a malodorous soup of fetid leathers, smouldering rubber and acrid two-stroke smoke. Excuse me while I go outside, I think I’m going to barf…

The Rookies awning is populated by 23 of the world’s fastest 13- to 16-year olds, chosen from a nerve-jangling tearjerker of a global selection process that aims to fast-track these youngsters – via a series of races at MotoGP events aboard identical KTM 125cc race bikes – to MotoGP fame and fortune. And perhaps that’s what really makes your nasal hairs stand on end: it’s the heady stench of youthful ambition intermingled with the odour of fear of failure.

There are futures at stake here, big futures for the riders (and for the parents) who only have to let their eyes wander a few yards up the paddock to see what ostentatious thrills might one day be theirs: the palatial motorhomes of MotoGP’s gilded elite, gleaming Ferraris and a coterie of silver-tongued managers, grinning hangers-on and girlfriends with ten-thousand dollar smiles and plastic tits. What wide-eyed pubescent wouldn’t risk it all for a stab at that?

The Red Bull recruits have already made it this far, from a list of more than 1100 applicants from 60 countries, and from here on in every gear change is going to be the most important gear change of their lives. These kids’ minds are set on their futures like most kids’ never are when they’re just 13 or 14. I was getting severely beaten for smoking Number Tens down fag alley and dreaming of riding an RD400 when I was their age, not focusing on becoming champion of the whole wide world.

You can see it their faces, hear it in their voices as they describe each and every moment of their latest race with a glorious intensity that only someone relatively new to this life can feel. It almost makes me want to be an adolescent again. Their eyes aren’t quite rolling around in the backs of their heads from all the adrenaline, but it’s not far off. Ironically, the last people on this earth who actually need a can of Red Bull are these 22 boys and one girl. They’re already flying, they don’t need wings. 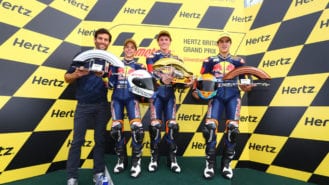 Red Bull Rookies: ‘They’re all kids and they’re all changing’

When Joan Mir was crowned MotoGP champion last November he was the first Red Bull Rookie to conquer bike racing’s highest peak. And when the 2021 grand prix season gets…

Not so the affable Red Bull marketing reps, dashing around making this dazzling enterprise happen while enthusiastically quaffing can after can of their speedy brew and hoping that somehow this show will add to the three billion cans they already sell each year.

The Rookies races are usually hugely entertaining, if only for the wild displays of reckless teenage braggadocio and out-of-their minds optimism that characterise so many of the overtaking manoeuvres. And the sense of fraternity among the 23 riders is refreshingly warm, none of the dead eyes and dead legs I remember from my days in schoolboy sport.

But I can’t help but feel a nagging sense of moral unease about the whole thing – allowing a bunch of school children to tear-arse around a racetrack at 120mph, flogging energy drink and entertaining a hundred thousand trackside fans and a few hundred million TV viewers.

Isn’t 13 a bit young to be sucked deep into the drive train of the corporate motorsport machine? Shouldn’t the youngest of these stars of the future be back home swapping ringtones, bullying teacher, doing some heavy petting, some studying, maybe even a bit of schoolboy motocross or minimoto? Or maybe it’s time to allow 13-year olds to do all the other supposedly adult things we currently don’t allow them to do – like driving on the road, drinking in pubs, working in factories, going down the mines, owning guns, voting, smoking and joining the army. Just a thought.