As I wrote last week, stuff happens at Assen. 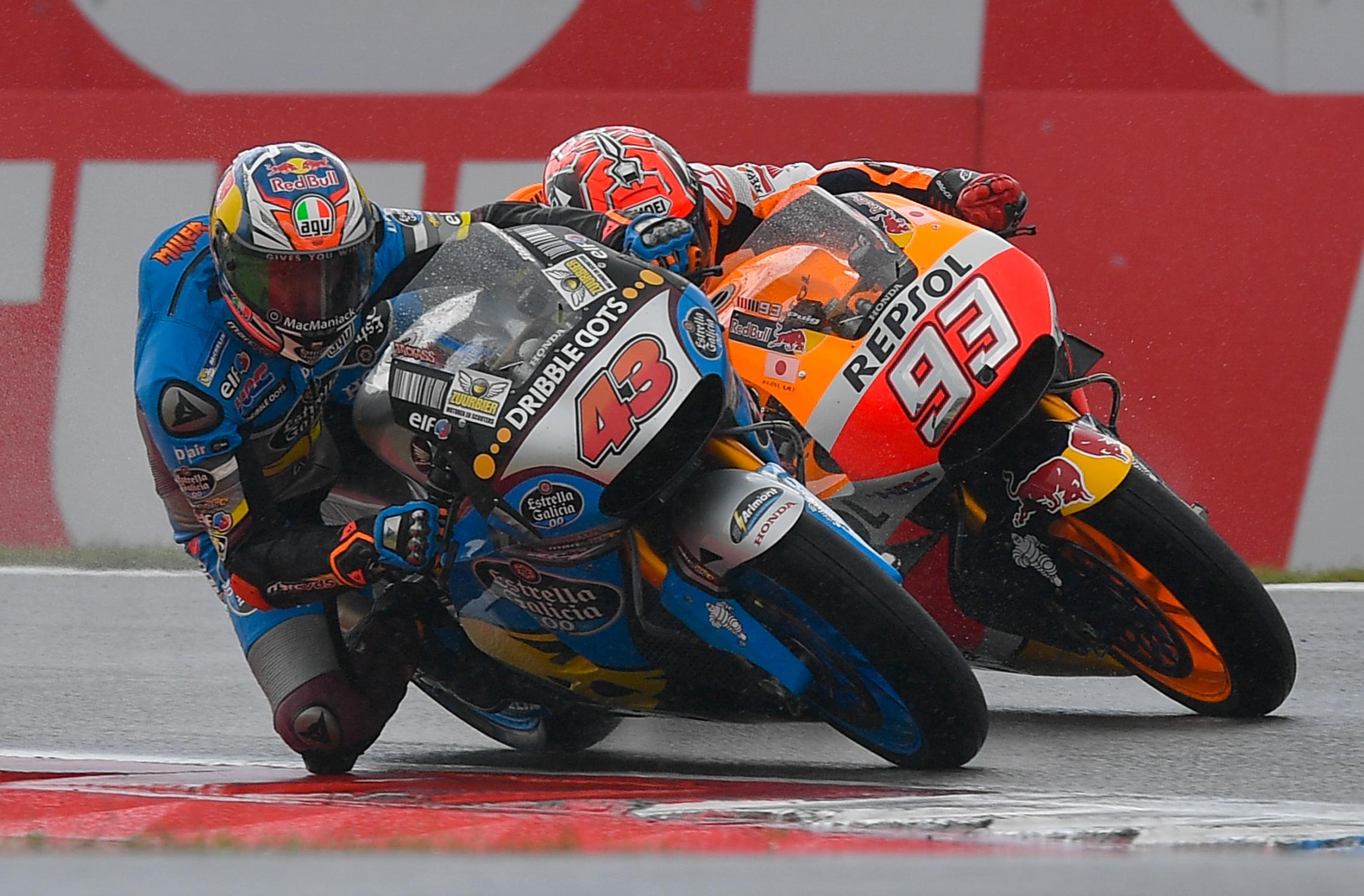 Jack Miller’s win was a fairy-tale: a young man who rides it like he stole it and made the next-to-impossible happen at a tricky track in tricky conditions. Since last year the 21-year-old Aussie has often been criticised for riding over his head – “I do get a little too excited sometimes” – but his ride on Sunday was inch-perfect at a slippery track with conditions changing on every lap and at every corner.

It was so refreshing to see young, humble, Jackass (his own words) shed a tear on the podium, sup his victory champagne (cava, in fact) from one of his boots, then get the entire post-podium press conference rolling around with laughter. It was just like the good ol’ days of Kevin Schwantz, Wayne Rainey and the rest, when jokes, friendly abuse and not-so-friendly abuse were what happened.

When nine-time world champion Valentino Rossi crashed out of first place he handed the lead to twice MotoGP champ Marc Marquez, who immediately got a pit-board telling him that Miller was closing in on him, like something from the Jaws movie. Marquez grinned, “my first picture was Jack and Cal at Silverstone last year!” (When an over-excited Miller took out team-mate Crutchlow in the rain-lashed British GP.) To which Miller replied, quick as a flash, “You were lucky!”

Miller also suggested that if he’d been able to watch himself leave Marquez trailing, he would’ve thought “that dickhead’s going to crash in two minutes”, before more generously conceding to himself that “this makes it clear that we know how to ride a motorbike – I’m not an idiot!”

Miller’s unexpected success triggered joyous celebrations in the Marc VDS hospitality unit, where there’s been nothing to celebrate all year. I figured it might be a fun night, so I finished my work in a hurry and headed down there. 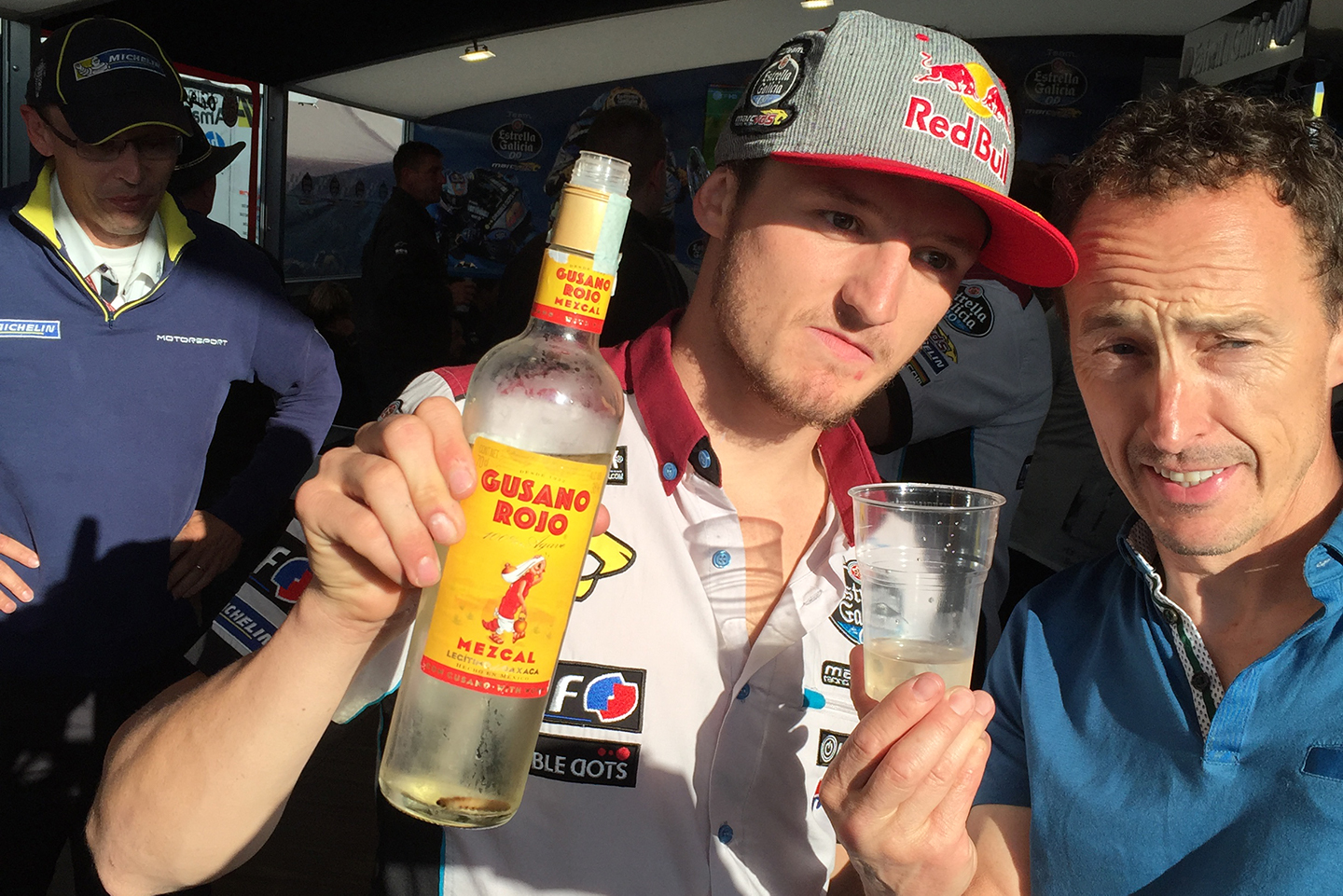 A few facts first. MotoGP teams don’t party in the paddock any more. That stopped decades ago. Most riders no longer cut loose in the paddock on Sunday nights to celebrate their survival; most of them cut and run for their private jets and tax havens.

It was sweet mayhem at Marc VDS when I arrived. Jack was in the thick of it, pulling pints at the bar (definitely not 0,0 Estrella Galicia) for everyone from team mechanics to Jeremy McWilliams (250cc winner at a damp Assen in 2001) who had just finished second in a KTM support race. Then Jackass upped the pace and cracked open a bottle of mescal (tequila, if you prefer) which emptied at an unfeasible rate, leaving the mescal worm sitting alone at the bottom. Jack is as unpretentious as they come, a sweet bloke, unless you share a hire car with him, so he freed the worm from its glassy grave and gobbled it down. Protein is an important ingredient of a racer’s diet.

Paddock people came to congratulate the youngster, from pissed-up fans to Michelin race boss Nicolas Goubert. Jack received them all with the same sense of bonhomie. This was an inclusive show, not a VIP party.

It felt like a time machine had flown me back to the late 1980s and early 1990s, when every hospitality unit (tents in those days) hosted a Sunday evening knees-up, to celebrate the conclusion of another high-stress, high-pressure, high-risk weekend. Particularly memorable was Le Mans 1991, when Marlboro Yamaha team owner ‘King’ Kenny Roberts ended up in one hell of a mess while celebrating Rainey’s second 500cc title. 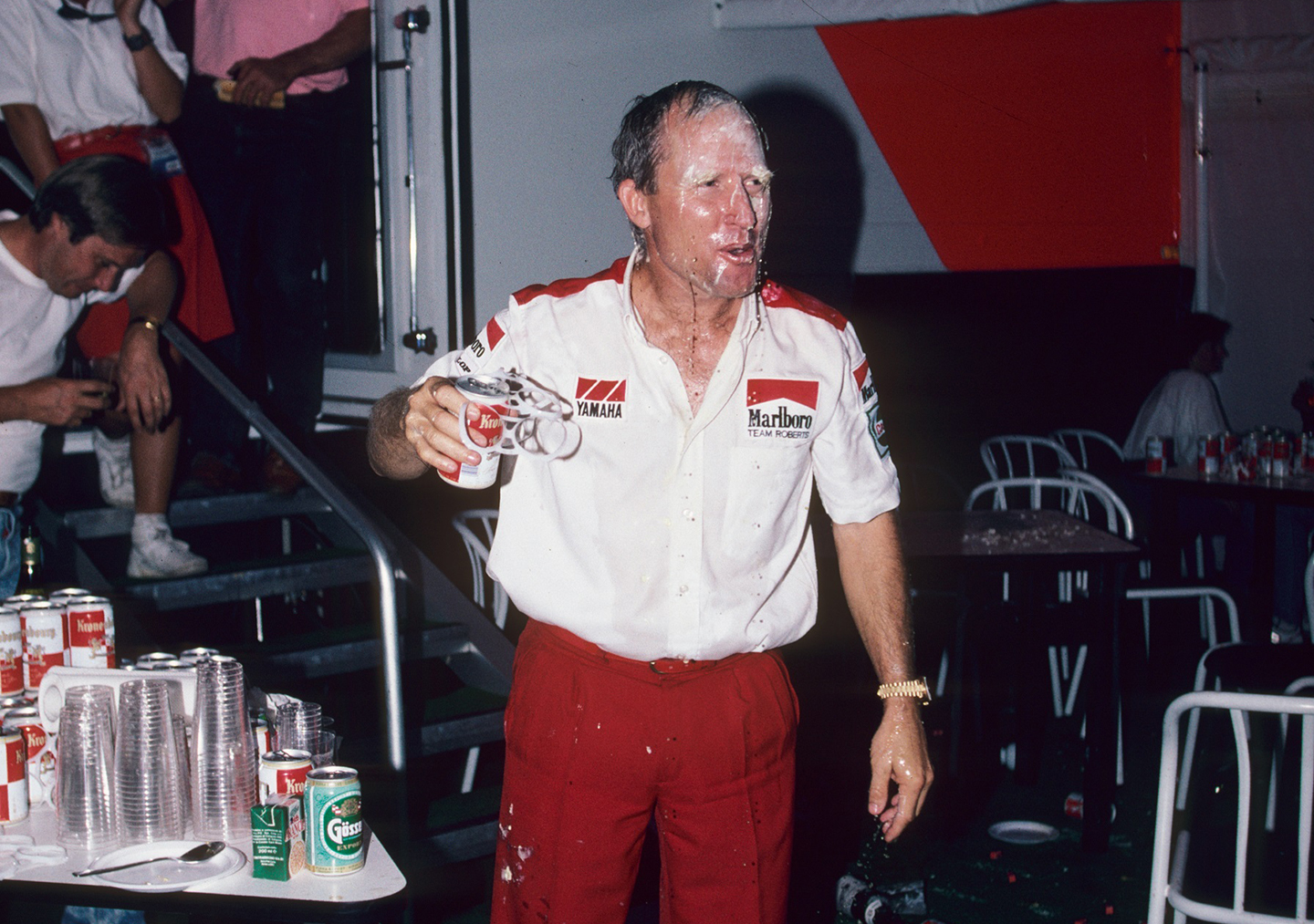 This concept of closure made perfect sense: mechanics had worked their fingers to the bone, riders had risked more in three days than most people do in a lifetime; so some kind of a safety valve needed to be opened before these people could be released back into normal society on Monday morning.

This was always the way it was in the days of Rainey, Schwantz, Mick Doohan and Wayne Gardner. Sometimes the promoters gave riders cans of beer during the post-race press conference – some way to rehydrate!

There was a rarely a Monday when we didn’t wake up late, heads throbbing from the previous night’s stupidities, before making a mad, sickly dash to the nearest airport to fly home.

I think I may visit Dorna CEO Carmelo Ezpeleta at the Sachsenring to suggest he instigates Sunday night paddock lock-ins, with no one allowed out until Monday morning, so riders can drink, make merry and lie to each other about how brave they were.

So, I salute Miller for his victory and I salute all his people who worked so hard to achieve this great act of giant-killing. Whatever else happens in his career – and I hope much more good stuff happens, because he’s a joy to have around – nothing can take away what he did on Sunday. He is now in the motorcycle racing pantheon, joining fellow Aussie premier-class winners Doohan, Casey Stoner, Gardner, Daryl Beattie, Jack Findlay, Garry McCoy, ‘Happy’ Jack Ahearn, Troy Bayliss, Ken Kavanagh, Kevin Magee and Chris Vermeulen.

In no way do I seek to diminish Miller’s wonderful achievement, but if MotoGP’s interrupted race regulations weren’t such a joke, he would not have won the race.

Consider what happened. Riders started the 26-lap race on rain tyres. A dry line began to appear, then the rain came back with a vengeance, with riders fighting 180mph aquaplaning and barely able to see the rev counter, let alone the racetrack. During those few laps they probably took more risks than they’d taken during the year’s previous seven races. As Scott Redding, said “I feared for my life.”

Finally, after 14 laps the red flags came out. It was the right decision because aquaplaning off a track at 180mph is unlikely to end well. But the race wasn’t restarted.

According to the rule book, the first race was annulled, like it had never even happened, so the riders had simply ridden through a bad dream, all the risks they’d taken during 14 arse-puckering laps had been nothing more than a hallucination. Luckily no one lay in hospital with an injury sustained in a race that had never happened. As Rainey said after a similar situation transpired at Spa-Francorchamps in 1989, “I can’t believe I just risked my life for absolutely nothing.”

According to the rules a new race was started once the torrential rain had subsided, with riders starting from the positions in which they had finished the first race, or qualifying session, if you prefer.

Conditions were still treacherous. Miller, Marquez, Redding and the rest once again took huge risks. So too did Rossi, Dovizioso, Cal Crutchlow, Bradley Smith, Dani Pedrosa, Yonny Hernandez and many others, except theirs didn’t work out.

The race lasted 12 laps, to bring the total laps to the originally planned 26 laps. Miller was the deserved winner, Marquez second, Redding third. So a 12-lap race took precedence over a 14-lap race.

In the old days, interrupted races were restarted and the result decided by adding times from both starts, so every risk and every genius move was rewarded.

The problem was the fans, or at least that’s what right-holders Dorna believed. The theory went that fans would find the concept of combined times too complicated, perhaps encouraging them to change channels and watch football, which would hurt Dorna profits.

I kind of understood that argument. But nowadays on-board transponders deliver lap times and rider positions several times a lap, which can keep fans fully up to date, second by second. 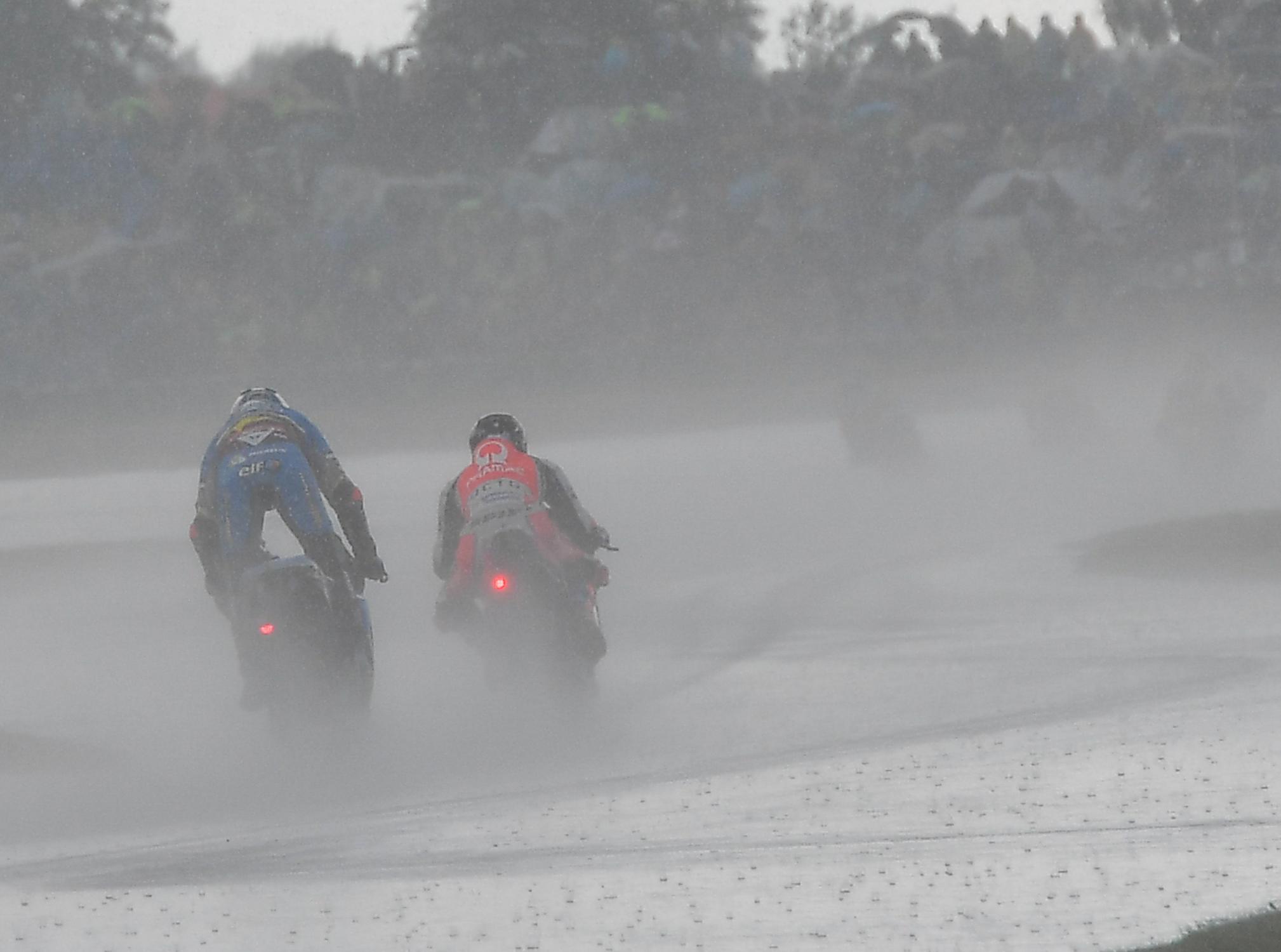 What kind of a fan would find a race of combined times that hard to follow? Any half-decent commentator would be able to communicate the situation and in fact make the race even more exciting. How much do we need to dumb down the sport to please the few fools lying on their sofas struggling to understand what’s going on?

It is just not right to ask the world’s best riders to risk their lives in the foulest conditions and then tell them they need never have bothered, that the 26 minutes of horror they’ve just lived through was entirely for nothing.

There is another solution to this perverse situation. Current rules require a Grand Prix race to go two-thirds distance before the result counts. If a race runs for one lap less than two-thirds distance, it can be replaced with a five-lap sprint that counts for full-championship points. Five laps – that’s a club race!

Why not reduce the minimum distance to half-distance? If 52 per cent is enough to decide a nation-changing referendum, surely it’s enough to decide the outcome of a bike race. Then, if the weather hadn’t allowed a restart for the final 12 laps, the Assen result would’ve been Andrea Dovizioso first, Danilo Petrucci second and Valentino Rossi third. Full points would have been awarded everyone would’ve gone home without further ado.

One way or another, the rules need changing.