“I want to go the disco!” cried Joan Mir on Sunday after becoming the 27th rider to be crowned MotoGP world champion.

But there was no painting the town blue in a sweaty Valencia nightclub into the early hours of this morning, because this season has been like no other.

The 23-year-old’s biggest worry during the last month or so wasn’t crashing out of a race or breaking an engine, it was contracting the virus that has transformed the world.

This was a totally new kind of pressure for MotoGP riders and it was no trivial concern, because the battles for the Moto2 and Moto3 championships have both been hit by Covid-19.

Sunday’s Moto2 and Moto3 race winners Jorge Martin and Tony Arbolino had their title challenges badly dented by the virus – Martin tested positive in September, forcing him to miss two races, and Arbolino had to miss last month’s Aragon GP, due to Italian quarantine rules.

Unlike many young racers Mir’s not all hair-gel and sunglasses, so he’s fully focused on being fast.

Mir knew he was in just as much in danger of the virus destroying his dreams, which forced him to live like a hermit whenever he went home between races.

“Normally you have pressure at the track, not at home,” said Mir on Sunday afternoon. “But even at home I wasn’t able to disconnect, because I had the pressure of trying not to get the virus and this made the situation much more difficult.”

The 2020 MotoGP championship has been the most topsy-turvy in history, with nine different winners from 13 races and title challenges ebbing and flowing according to crashes, tyre woes and chilly conditions, the result of the Covid-delayed calendar. Mir’s secret has been consistency – stacking up the points aboard his Suzuki GSX-R while his rivals were up one weekend and down the next.

The Suzuki isn’t the fastest motorcycle on the MotoGP grid but it works the tyres better than any other, which is the secret to spec-tyre racing.

Mir is one of the quickest MotoGP title winners in history. He commenced his full-time grand prix career in the spring of 2016, so this is his only his fifth season at world level and only his second in the premier class.

Mir is bright, friendly and just about as normal as it’s possible to get for a MotoGP rider. Unlike many young racers in today’s image-obsessed world he’s not all hair-gel and sunglasses, so he’s fully focused on being fast. 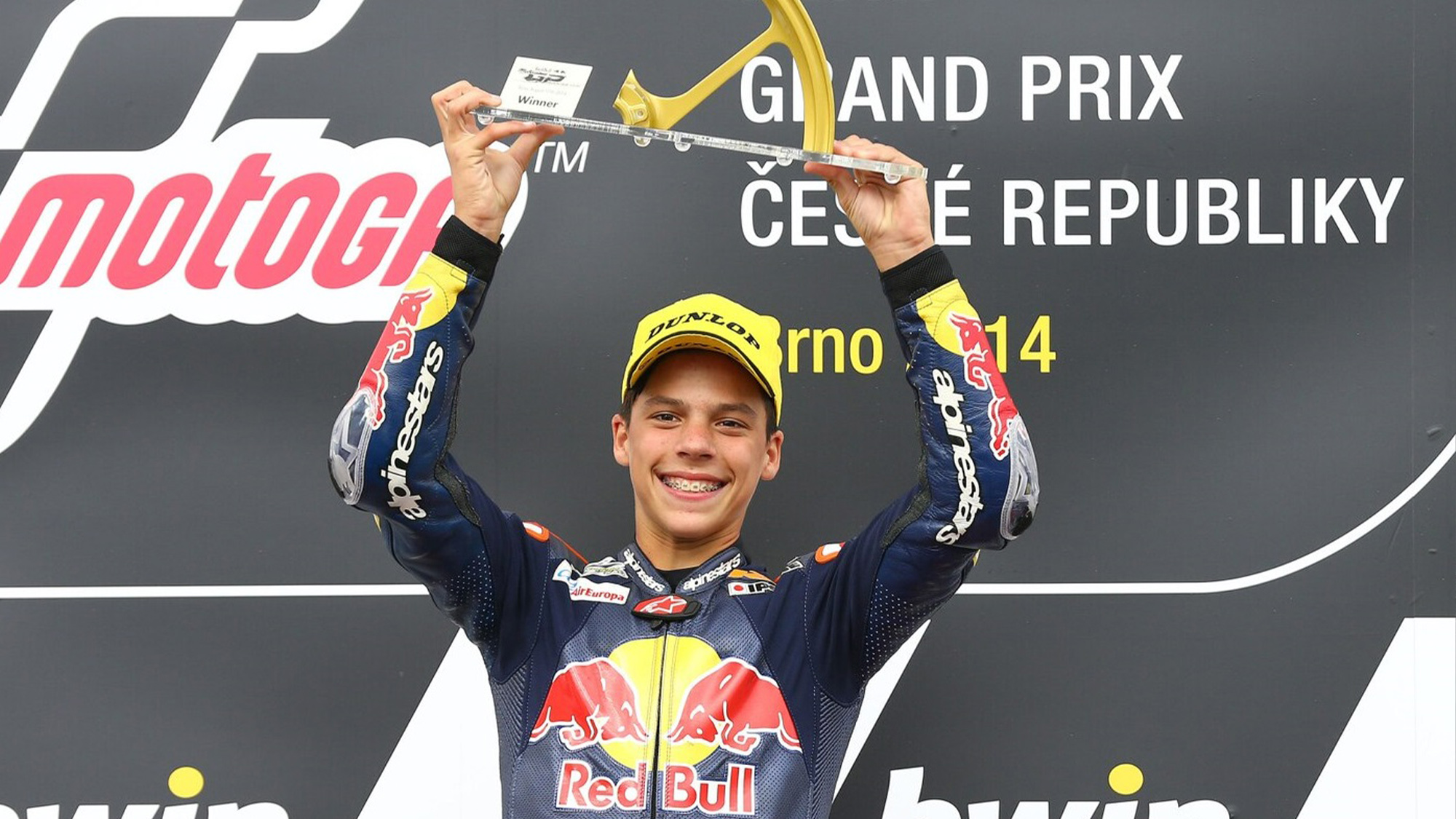 Mir, celebrating Rookies victory at Brno in 2014, is the first Red Bull Rookie to wear the MotoGP crown

He hails from the island of Mallorca, birthplace of three-times MotoGP champion Jorge Lorenzo, whose father Chicho Lorenzo taught his son and now teaches other youngsters how to ride. Mir took his first steps to being a racer at Chicho Competición.

Chicho’s teaching doesn’t involve kids tearing around dirt tracks faster and faster until they fall off; it demands endless repetition of low-speed riding exercises around cones and go-kart tracks until perfection becomes the rider’s subconscious self.

No surprise that Mir’s riding style is very Lorenzo – glass smooth, totally at one with the motorcycle and utterly committed.

He climbed rapidly: from the Balearic championship to victory in Spain’s 125cc PreGP series and second place in the Red Bull Rookies. In 2015 he contested the CEV Moto3 series, dazzling with his speed and making his GP debut at Phillip Island, replacing an injured rider.

He won his first world title in only his second season of grand prix racing, when he utterly dominated the 2017 Moto3 championship, before graduating to Moto2 in 2018. He was immediately on the pace, just missing out on a podium in his third race on a big bike, at COTA in April 2018.

That result was an important sign to any MotoGP teams watching his progress, because many riders struggle to adapt from a skinny-tyre 100 kilo Moto3 bike to a fat-tyre 150 kilo Moto2 bike. Two weeks after COTA, Suzuki team manager Davide Brivio approached Mir at Jerez and they quickly came to an agreement.

Brivio must’ve wondered if he had got the right man, because after three podiums in the first half of the 2018 Moto2 season Mir went to pieces. He crashed out of three races on the first lap and only redeemed himself with a close-fought second place at Phillip Island, behind Brad Binder.

His MotoGP rookie season was up and down, but Suzuki didn’t put pressure on him. The factory had him on a two-year contract and believed he would come good within that time.

“At the moment they say to me, ‘Don’t worry about the result, just get used to the races, the bike and the rivals’,” Mir told me at Assen last year.

Five weeks later a terrifying 180mph/290kmh crash during post-Czech GP testing at Brno put Mir in hospital with internal injuries. Even worse, Suzuki engineers knew that the accident had been caused by a technical fault, but they weren’t sure what. There are few things more worrying for a rider, because he can’t be sure how to avoid another smash when he next gets on the bike. 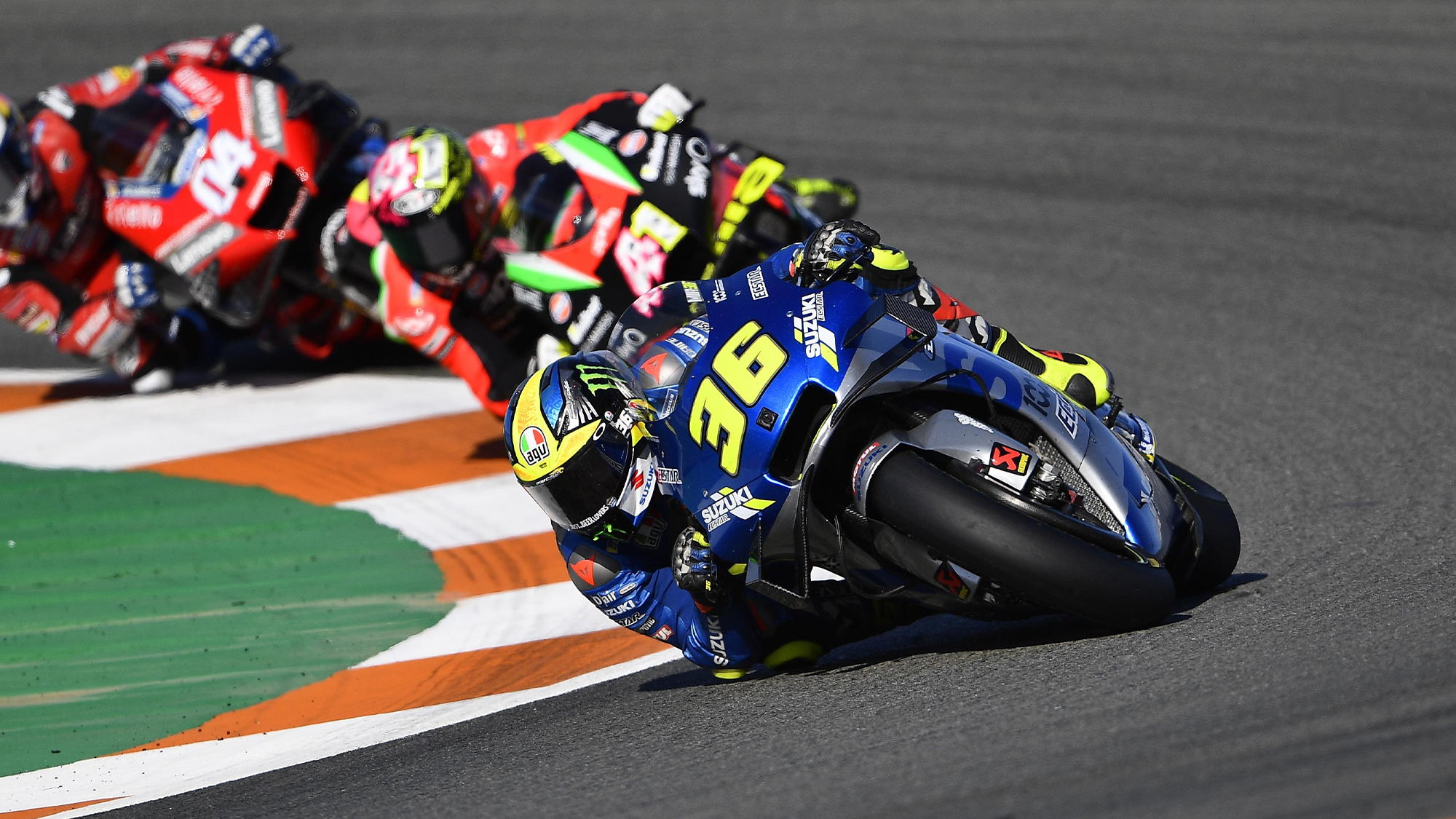 Mir missed two races recovering from his injuries and returned to action at Misano, where he qualified tenth and finished eighth.

This was another hugely important weekend, because the ability to bounce back from even the scariest crash is a prerequisite to greatness in MotoGP.

At the end of that weekend I asked Mir what it’s like riding a 220mph/355kmh motorcycle without knowing why the bike had spat him off at close to top speed at Brno.

“I’m young, that’s it; this is the secret,” he grinned. “I’m conscious of the fact that ten years from now this will be more difficult for me, but now it’s not a problem.”

Mir’s youth and intelligence continue to serve him well. This year he’s been entirely unruffled by his transformation from a rookie who finished outside the top ten of the championship to MotoGP title contender.

He’s taken 2020 in his stride after making his only real mistake at the season-opening Spanish GP, where he crashed out on the second lap while hurrying to come back from a fourth-row start. Qualifying is the GSX-RR’s only weak point but the bike’s stunning corner-entry performance usually allows Mir to quickly carve his way through the pack.

Mir has had his share of bad luck too. He was taken out by Iker Lecuona at Brno, where he had spent morning warm-up riding around with race-winner Brad Binder, proving he had the speed to run at the front. Next time out at Red Bull Ring he launched his championship bid with his first MotoGP podium. And the week after that at the Styrian GP he was on his way to a first victory, until the race was red-flagged following the Maverick Viñales shunt.

After that breakthrough second place in the Austrian GP his podium hit rate was superb: third and second at Misano, second at Catalunya, third and third at Aragon and finally victory in the first race at Valencia.

Last weekend the pressure did rattle him somewhat. In cool, tricky conditions he crashed in FP2 and then struggled in qualifying, putting him back on the fourth row again. His nerves were obvious in the race-day warm-up session, when his crew experimented with different front-tyre pressures. They were concerned he would end up deep in the pack, where heat from other bikes would raise the pressure of his front tyre, reducing grip and feel.

In fact the race turned out just right. Mir was never higher than seventh but he had a clear track ahead of him for much of the race, so there were no tyre-pressure worries.

But it wasn’t an enjoyable 27 laps. “I don’t want to talk about the race, because this was the race where I struggled the most all year,” he laughed afterwards. “And I risked more too. It was really, really difficult. But we have the title so I don’t care about the race!”

Hopefully MotoGP 2021 won’t be run under the same Covid cloud and hopefully the world will get to see Mir defend his title against six-times MotoGP king Marc Márquez.