KTM won its fourth and greatest MotoGP victory outside Barcelona on Sunday. Factory Red Bull rider Miguel Oliveira dealt with all-comers to back up his surprise runner-up result at Mugello the previous weekend.

KTM won three races last year and for a while the RC16 looked like it was the best bike on the grid, but then Michelin changed its tyre allocation over the winter, introducing some tricky asymmetric fronts, and at the first few races of 2021 the bike was nowhere.

“We are screwed,” one KTM engineer told me in Qatar. And they were. It looked like the Austrian factory would have to struggle through 2021, hoping that either an all-new RC16 or a redesigned Michelin front tyre would put them back at the front in 2022.

Instead it took just a few weeks, with a revised frame with different stiffness balance that reduces the stress on the front tyre by replacing storming corner-entry speed with better mid-corner speed. It’s been a remarkable turnaround – tested at the post-Jerez tests, raced to second at Mugello and to victory at Barcelona.

“The tyre allocation is the given part in MotoGP, so our job is to find an engineering solution to fit it,” said KTM MotoGP project manager Sebastian Risse on Sunday afternoon.

“One small weak point and you are out of the game”

Of course, KTM engineers don’t believe they’re out of the danger zone yet, because modern MotoGP is all about the tiniest of details.

For example, they think the RC16 might not have performed so well on Sunday if the weather had been cooler, which would’ve prevented its fastest riders from using the hard-compound asymmetric front tyre, which they need to fully extract the bike’s performance and was a crucial part of Sunday’s success.

Oliveira, eighth-placed team-mate Brad Binder and faller Danilo Petrucci were three of the four riders who ran the hard front in the race. Petrucci’s Tech 3 KTM team-mate Iker Lecuona didn’t because he had two big crashes with the tyre in practice, so he didn’t want to risk racing with the tyre. Instead he chose the kinder, softer medium option, but he crashed anyway. 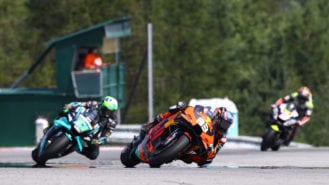 Risse and team-manager Mike Leitner were very impressed with how Oliveira extracted the maximum from the hard asymmetric, without falling victim to the tyre.

The tricky point of Michelin’s asymmetric front tyres is the transition between the two compounds. If the rider doesn’t understand that and learn how to deal with that he will be slow or he will crash.

“It’s all about in which load phase you go over the transition, whether you’re already on the brakes or if you start to brake or if you’re in the middle of a quick change of direction,” explained Risse.

“It’s not easy for the riders to understand the asymmetric and treat it correctly,” added Leitner. “The rider must treat the tyre in a good way to keep its performance throughout the race. These tyres are very sensitive to overloading, to temperature, to the load the rider gives to the tyre and the way he loads the tyre. One thing is the bike set-up and the other is the rider who has to be very smart to manage the tyre. What Miguel showed today is that he’s a very good and a very smart MotoGP rider.” 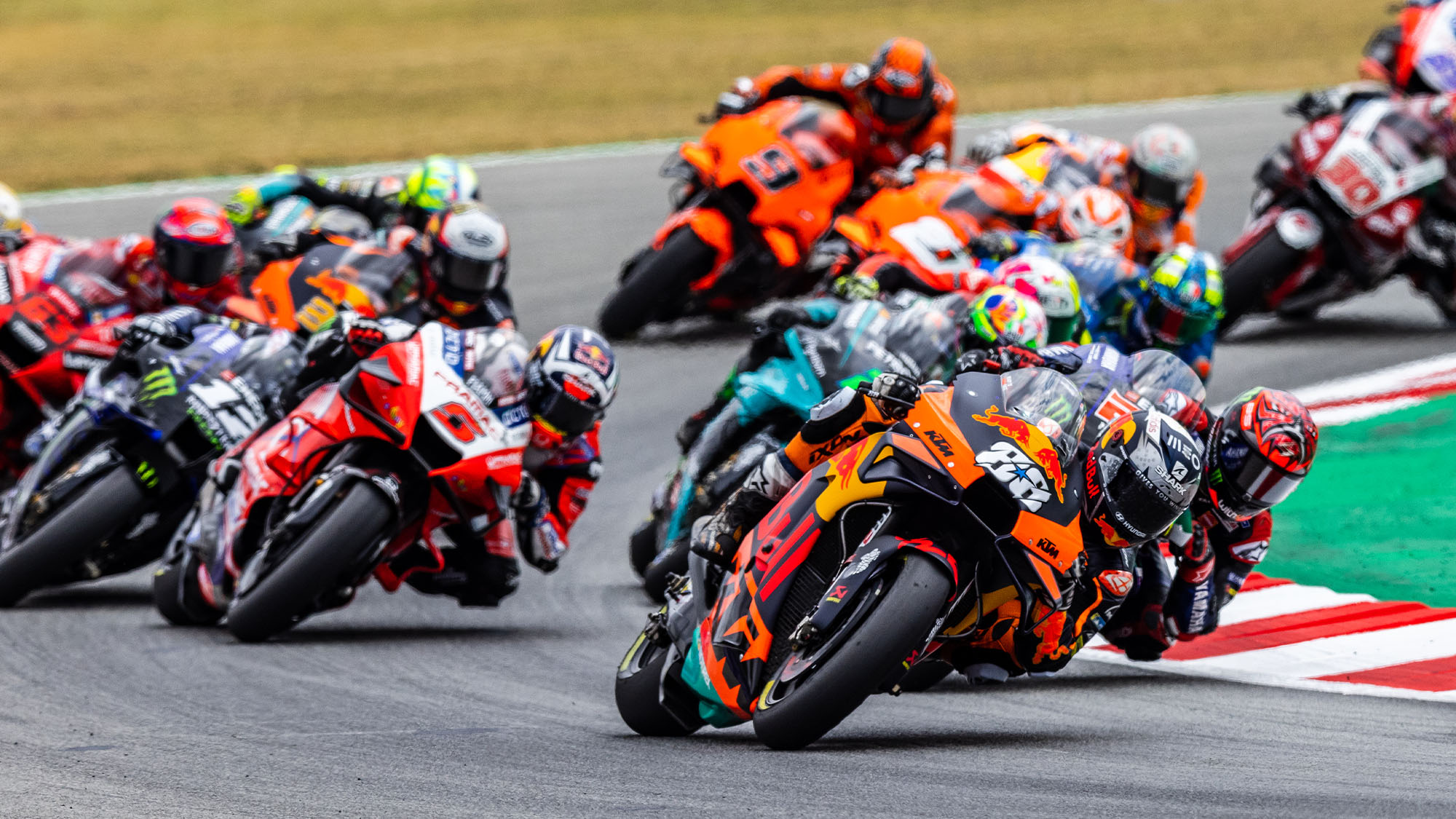 Oliveira leads Quartararo, Zarco and the rest at Catalunya

“But MotoGP is so competitive and so complicated at the moment – one small weak point and you are out of the game, so we have to see how our bike and the tyres fit the next tracks.”

On Sunday the KTM was the best bike in the race: good on the brakes, enough corner speed to stay with the Yamaha and, crucially, enough top speed to make the winning overtake on the start/finish.

“Both Mugello and Catalunya were very difficult tracks for us in past, also Brno, which last year was a great success for us,” added Risse. “We have great riders and they can make a lot out of the bike and if we get the bike right I think we can be competitive anywhere. However, we have to be very careful about any expectation for the coming tracks. Here we made the asymmetric work, but only the future will prove if we have found a general way to make tyre work or if the last two races were specific cases.”

The results of the last two races certainly suggest that KTM has developed a V4 that has all the advantages of a V4 – straight-line speed and excellent braking performance – without losing out to the inline-fours in cornering speed. 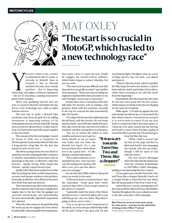 You don’t need to be a genius to understand why it’s easier to overtake in MotoGP than in Formula 1. But as MotoGP machines become more closely matched – due…

Which brings us to Honda’s RC213V, languishing outside the top ten in the last two races. Honda’s MotoGP project is currently in its biggest crisis in decades, without a race win since November 2019, its longest victory drought since the early 1980s, when the company raced the oval-piston NR500 four-stroke against the faster Suzuki and Yamaha two-strokes.

The irony is that KTM based its original RC16 on the RC213V. The Austrian company may have used a steel trellis frame – as used in its road and off-road bikes, plus WP suspension – but the architecture and configuration of the bike was obviously inspired by the, RC213V, which was then flying high with a young Marc Márquez on board.

“Honda was our idol because it had the strongest V4 on the grid at the time when we started our project,” explained Risse. “In MotoGP you need horsepower, which is why we chose a V4 engine. Maybe it’s a bigger challenge to get the right package with a V4 engine but if you do get it right we believe you can make a better compromise over a full season.”

Risse doesn’t think the RC16 and RC213V are that similar any longer, due to rider input.

“Since we first ran the bike we took our own direction and we are guided by our riders. Corner speed is what our riders have wanted for a long time, so they lead us in this direction and step by step the bike gets better.”

So where have Honda gone wrong? Most obviously it lost its fastest two riders: Marc Márquez and Cal Crutchlow. Márquez is back but he’s still not maximum Márquez. 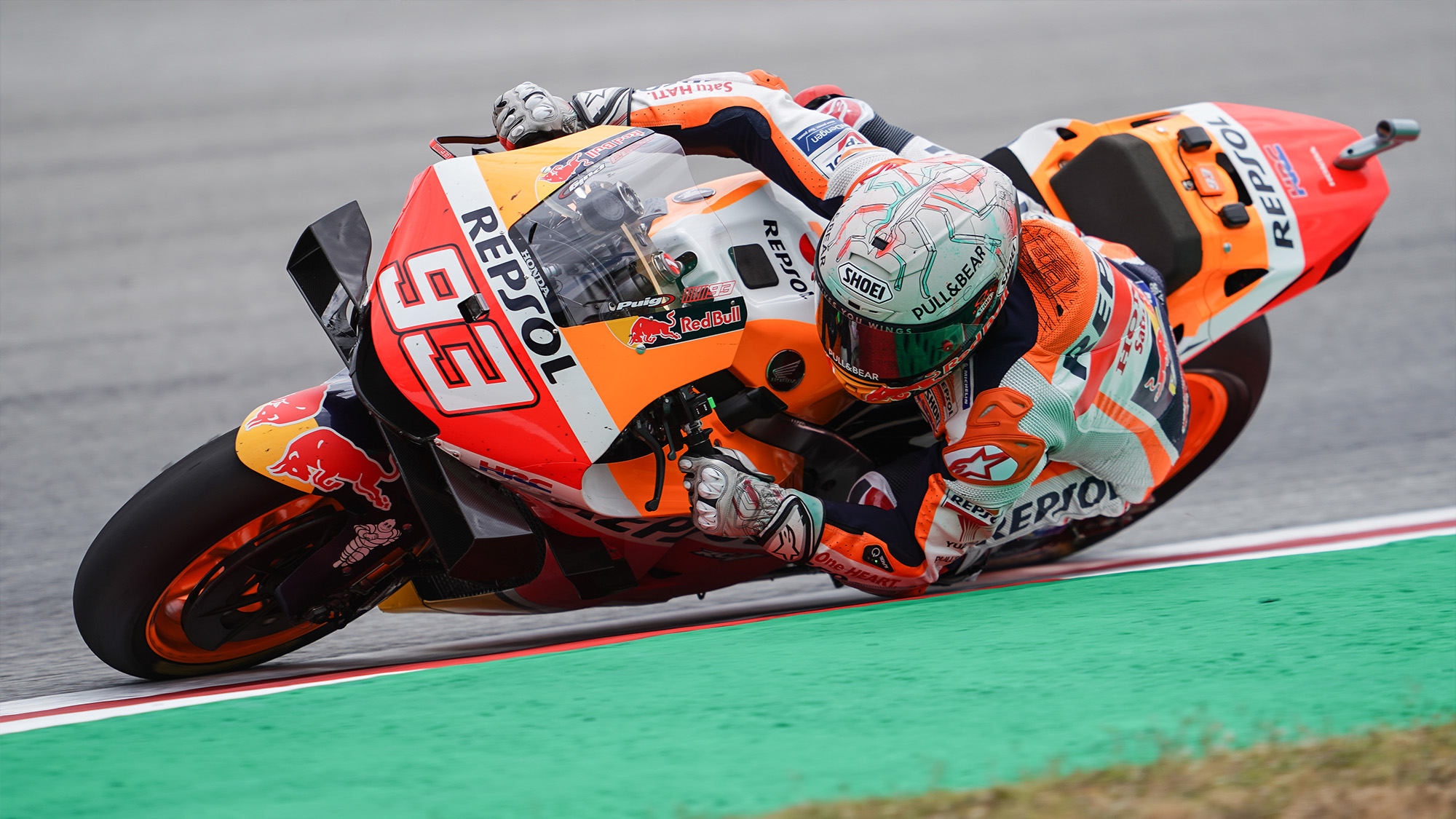 Marquez before his crash – still looking for answers

Inevitably while he was maximum Márquez, Honda developed the bike to make him even faster, because all that matters in MotoGP is winning. So long as a factory is winning races and world titles it won’t be too worried about making the bike work for riders finishing further down the order.

In this way Márquez’s otherworldly talent does have a price. A rider that can ride anything and ride around any problem is a huge asset to a factory but his talent can mask problems and therefore hurt development for lesser talents.

Ducati was in the same position when it had Casey Stoner. The Aussie could ride around the Desmosedici’s many problems, so after he left it took the company five whole years to start winning again.

Crucially Márquez was out from the first race of 2020 and Crutchlow was injured for much of the year. This was a bad time for Honda to lose the riders leading its development programme, because Michelin’s softer, grippier rear slick changed everything for some factories, most of all for the factories using V4s, which use the rear tyre in a different way to the inline-fours. Notice how Suzuki’s and Yamaha’s corner-speed bikes dominated 2020…

Honda had a terrible time with the new rear during the early stages of last season. By Aragon – where Alex Márquez finished second and Takaaki Nakagami started from pole – it seemed like Honda had fixed the problem. But in fact Aragon was a one-off – the RC213V has always gone very well there.

After Sunday’s race at Catalunya, Márquez’s comments exactly echoed those of riders who struggled with the new rear last season. 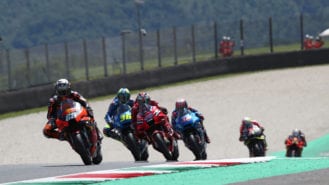 No one was surprised that Fabio Quartararo won Sunday’s Italian GP, even though he had the third slowest bike in the race. Mugello top speeds always make the headlines, but…

On Sunday both Márquez and team-mate Pol Espargaró crashed out for the same reason, they lost the front braking into corners. But this front issue came from the rear.

“We cannot stop the bike so we are braking into the corner with a lot of banking and that’s when things happen like they did to me and Pol today,” Márquez added.

Last year Honda tried everything to adapt the RC213V to the new rear: electronics, exhaust, intake, chassis set-up, chassis geometry and frame stiffness. There was only one thing they couldn’t change – engine internals, because mid-season engine upgrades aren’t allowed and due to Covid-related technical rules engine upgrades were allowed into 2021 either.

Excessive crankshaft inertia is probably one of the roots of Honda’s problems, because it makes the bike difficult to control on corner entry. But Honda won’t be able to fix that problem – if it is the problem – until next year.

Honda has tried numerous different chassis over the past two years trying to get frame and swingarm flex right. Chassis flex is currently the biggest deal in chassis design – more so than geometry, balance and so on – because it’s such a black art. KTM attributes its breakthrough at Mugello and Catalunya to a frame with different stiffness that allows riders to use more corner speed to turn the bike better and therefore pick it up faster to allow them to use the fatter part of the rear tyre, so they can open the throttle earlier for better acceleration.

This is what Honda needs to do. Find some more corner speed to follow the same road KTM has taken. Will it be able to do that this year, or will it have to wait until next year, with a new engine and a fully fit Marquez?