Jorge Lorenzo and Ducati left everyone trailing after three days at Sepang, but the most important news happened off the track 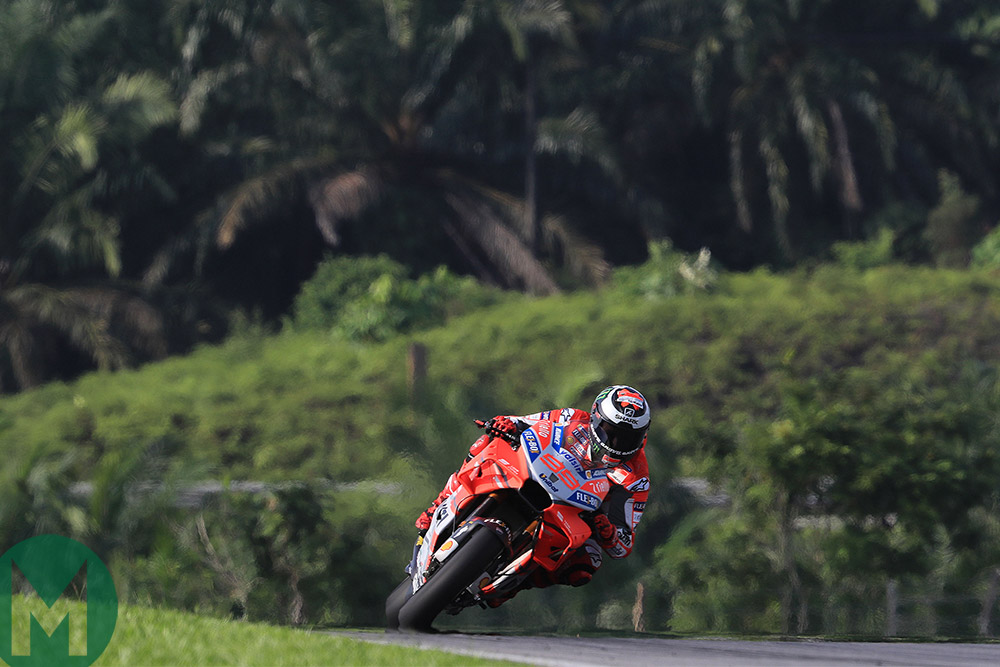 Jorge Lorenzo and his Ducati GP18 were clearly the fastest bike and rider at sweltering hot Sepang today, the Spaniard bettering Repsol Honda’s Dani Pedrosa by almost two tenths of a second.

Lorenzo’s best lap was the fastest-ever at Sepang, which isn’t necessarily as important as it sounds. The Spaniard rode his lap earlier in the day, before track temperature exceeded 50deg C, to give him better grip and more horsepower. Some riders didn’t bother going for a feel-good best lap at the same time, preferring to wait until the afternoon, when the track was at its hottest, just as it will be when they return here for November’s Malaysian Grand Prix.

Nonetheless, Lorenzo’s best was a storming lap time, which should have his rivals at least a little bit worried. As the three-time MotoGP world champion said, “a fast lap time is a consequence of a good bike.”

Last season Lorenzo adapted his riding technique 80 per cent to suit the Ducati, now he seems to be working with the Desmosedici as he worked with the Yamaha YZR-M1, which took him to the 2010, ‘12 and ‘15 world titles.

The main weapon in Lorenzo’s armoury has always been corner speed, a strength he couldn’t exploit last year because the Ducati didn’t do what he wanted it to do in the middle of the corner. Now it does.

“The bike turns better and I can get on the throttle earlier,” he added.

Honda categorised this three-day test as an engine evaluation process more than anything else. It had three different RC213V engines here: the 2017 engine, the November 2018 engine and another specification of engine.

“But we still need to work on the engine to make it kinder to tyres towards the end of a race,” said Pedrosa, who was two tenths better than third-fastest Crutchlow, who started the test with three different RC213Vs in his garage.

Márquez ended the day seventh and entirely unruffled. “The most important thing for me was to do a long run in the afternoon, to see how the engines worked with worn tyres and how the electronics dealt with the worn tyres,” said the reigning world champion. “The engine is better in top and bottom power, but we need to work on smoothness. The worry is that an engine is always smoother in the heat, because you lose some power, and the next test is in Thailand, where it will also be hot, so we need to be very careful how we choose before the engines are sealed at the first race.”

Lorenzo’s team-mate Andrea Dovizioso was fourth, just ahead of Pramac Ducati’s Jack Miller, once again the surprise of the day in fifth. “I feel good on the bike,” he said. “The Honda got its lap times by charging up to the corners at the limit, this bike had more of a margin, which I need to get used to.” 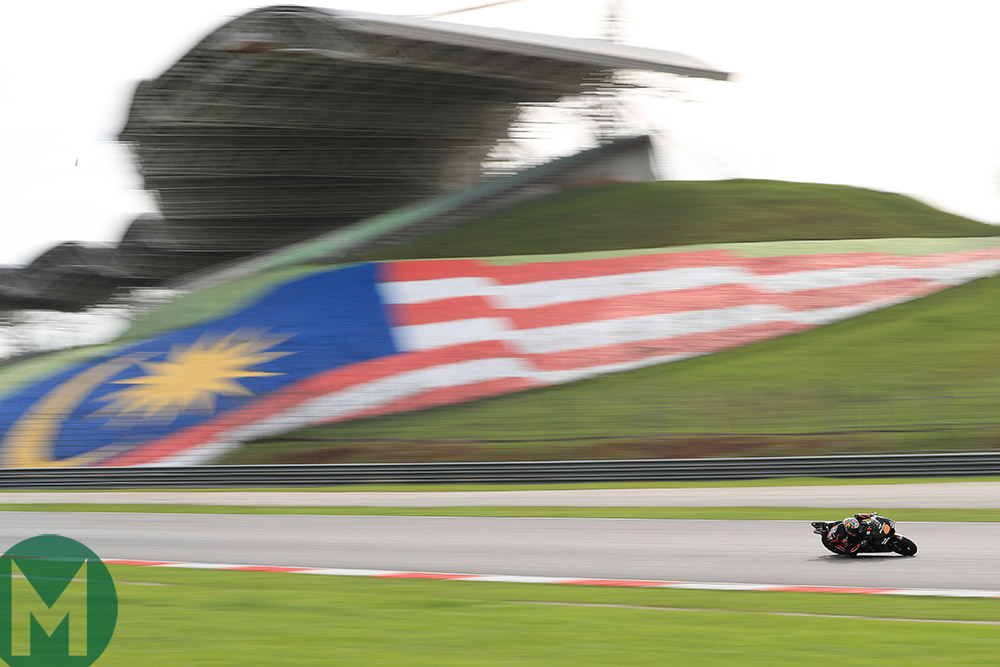 Alex Rins (Suzuki) was next in sixth, impressed by a new GSX-RR engine that gave him better power from the first touch of the throttle. Valentino Rossi (Movistar Yamaha) was down the order for much of the day before putting in his best lap in cooler conditions as the sun went down. Team-mate Maverick Viñales ended the day looking confused, after having to abort a race run. He was 18th.

Of course, you shouldn’t believe everything you see in preseason lap times. 1980s legend Freddie Spencer used to camouflage his preseason pace by riding the first half of a lap flat-out, then easing off for the second half of the lap and the first half of the subsequent lap, before returning to full speed for the second half of that lap. Honda calculated his lap time by adding the two hottest halves together, while his rivals didn’t have a clue what was going on. But it’s impossible to pull off that kind of trick now, with official sector timing.

Therefore, perhaps the most important news from today was a new tyre regulation that should improve life for everyone. This year, for the first time in history, premier-class riders are guaranteed to ride the entire championship without a change of tyre construction or profile.

The control-tyre supplier – currently Michelin – will not be allowed to change its tyres, apart from a few compound tweaks to suit different layouts and asphalts. Front and rear tyres will be the same as 2017, so no need for people to adapt.

This is a big deal. It’s a huge blessing for riders, crew chiefs and manufacturers, who will no longer be required to redesign chassis, redefine set-ups and make crucial adjustments to riding technique when the tyres suddenly change. It’s not overstating the case that a new tyre can demand a whole new chassis, especially regarding stiffness in certain areas of the mainframe and swingarm.

Half of the last four MotoGP championships have been turned upside down by a midseason change in tyre construction. Last year Viñales’ title charge was derailed by a switch to a stiffer construction front slick. And, in 2012, the same thing happened to Casey Stoner, whose title hopes were destroyed by a midseason change to a softer front Bridgestone slick, which couldn’t handle the super-aggressive corner entry encouraged by Honda’s RC213V.

Last year it wasn’t only Viñales thrown into confusion by the change; many other riders and teams spent much of the rest of the season trying to adapt their chassis that had been originally designed to work with the harder front.

It’s easy to understand the point of view of the factories: it’s not fair to introduce a new tyre which doesn’t suit their tailormade chassis. And it’s not fair for the riders who have spent months adapting to a tyre, only to find they’ve been wasting their time. Ask Stoner and Viñales about that one.

This latest regulation follows a growing trend – no engine development, no electronics development and so on – designed to reduce costs and maintain close, competitive racing. However, this new direction isn’t great news for tech-heads, who like to see open hostilities in all areas of technology.

Also, the randomness of a tyre change can be great for the fans. Imagine if Viñales had continue to win two out of three races for the remainder of 2017, the season wouldn’t have been so entertaining. Instead, a dramatic story unfolded, with each factory battling to get on top of the new tyre. In other words, midseason changes can have a thrilling effect on the ebb and flow of a season. It’s the same with the engine-freeze rules: no longer can a hard-working factory ambush the series leader, halfway through the season, and create a whole new story that no one had seen coming.

Magneti Marelli is in the same position, as the Italian company starts its third season as MotoGP’s unified-software. Its 2018 electronics kits will be at least 95 per cent the same as last year’s, because all the teams know where they are with the current software; so any big changes will only make some riders faster and some slower.

The decision to effectively freeze tyre, engine and electronics development has more to do with keeping riders, teams and manufacturers happy. Also, Dorna couldn’t be happier with the current state of MotoGP racing – fast, exciting, safe and usually unpredictable – so it doesn’t want to risk spoiling the show fans by upsetting the status quo.