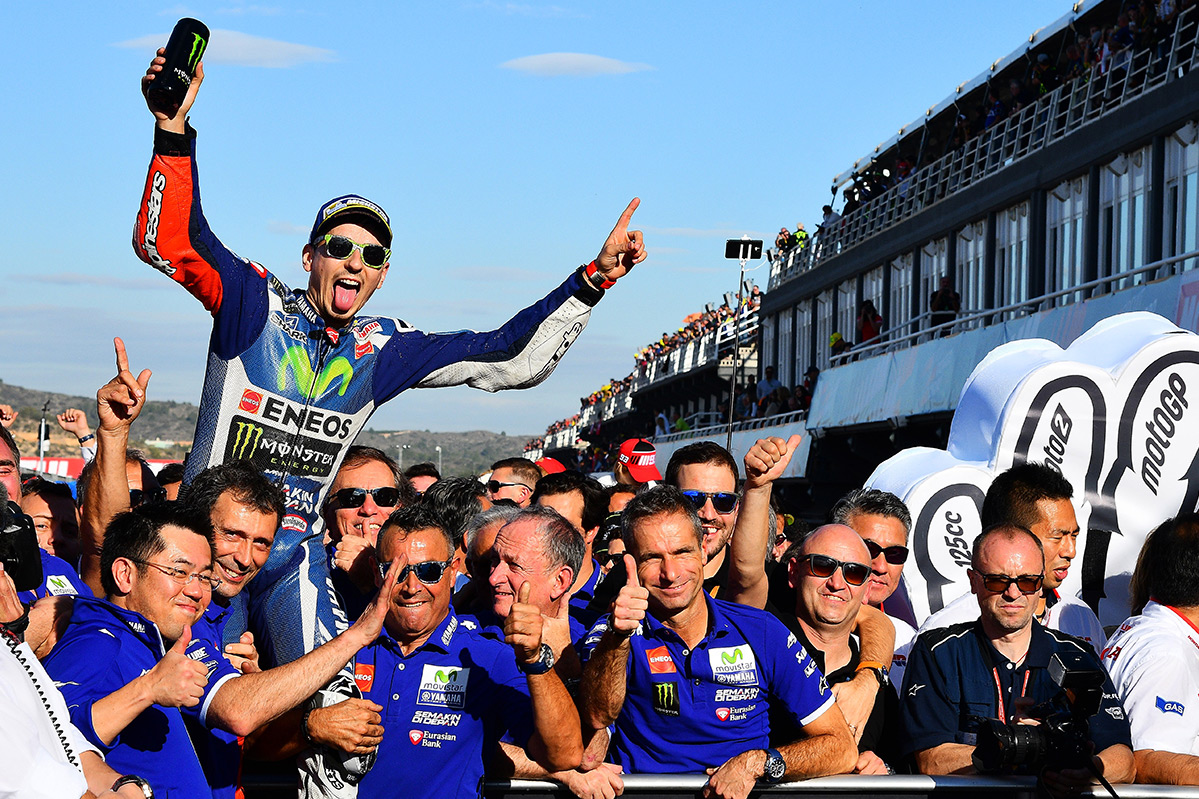 A few months ago, many people believed that Jorge Lorenzo had given up on the 2016 season because his title defence had collapsed like a game of Jenga played by a bunch of two-year-olds.

You can perhaps understand his critics’ way of thinking. After winning three of the first six races, Lorenzo apparently fell to pieces. He was beaten at Assen, Sachsenring, Red Bull Ring, Brno, Silverstone, Misano, Aragon, Motegi, Phillip Island and Sepang. That’s 10 consecutive races, with just three visits to the podium; his worst-ever performance in MotoGP, even worse than his bone-crunching rookie season in 2008.

Some people suggested that his brain was already elsewhere – thinking about his new job in Bologna and his big, fat Phillip Morris pay cheque. Others suggested he had obviously given up caring about winning more races for Yamaha. Others believed he was giving himself a bit of a holiday, cruising through the last few weeks of his old job, no longer caring if he doesn’t win the employee of the month award.

No! We won’t be taking a holiday because we have a point to prove: to the team, to the factory bosses, to the sponsors, to all the people who think we’ve become an idiot crash-test dummy who’s forgotten how to ride a motorcycle and therefore no longer wants to take risks, because why would we want to do that when we can’t wait to get home to our millionaire’s villa and take the Ferrari out for a drive? But most of all we have a point to prove to ourselves, because if our brain even momentarily shuts the door to our F**K YOU department, then the game is over and we will have to go looking for a proper job. That usually does the trick.

Lorenzo could have been forgiven for shutting that door behind him and throwing away the key at the end of July’s German GP, where he crashed as many times during three days as he had during the entire eight-month 2015 MotoGP season. 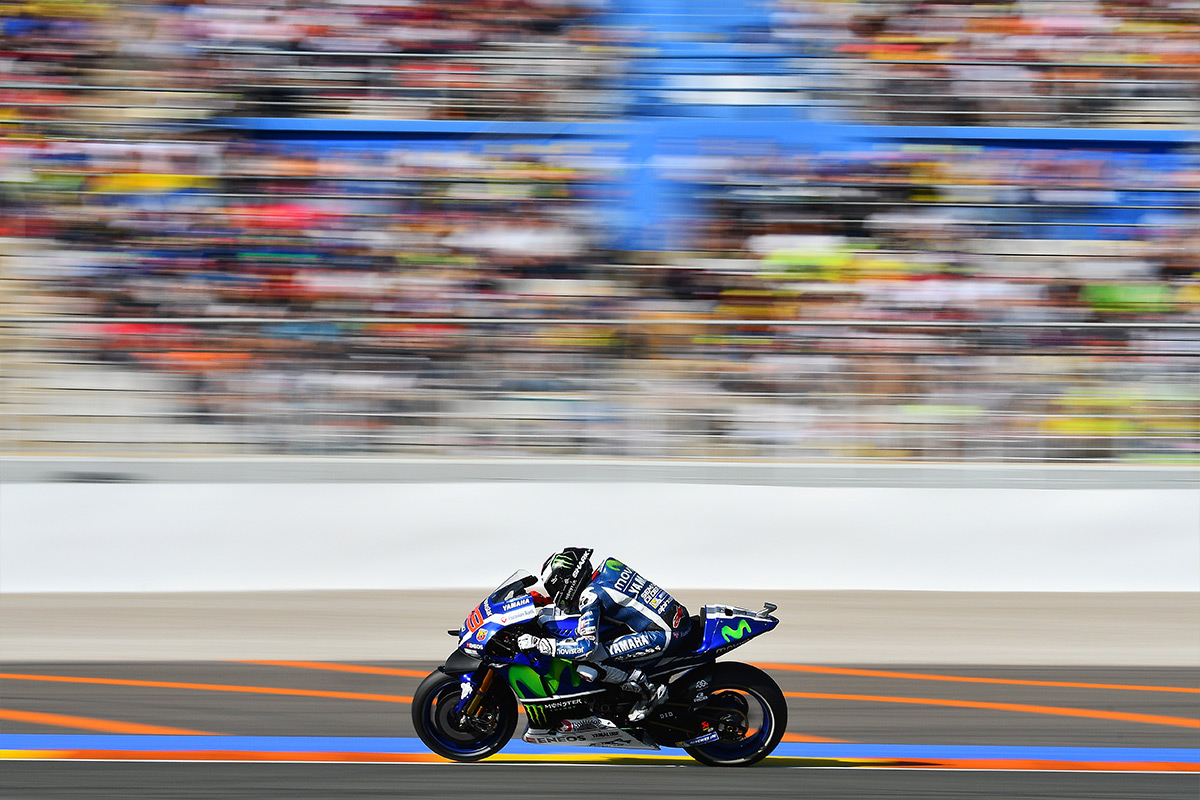 Michelin’s front tyre – especially when temperatures were low and even more so when the track was wet – didn’t give him the confidence he needs to storm into a corner, using the front to create his race-winning mid-corner speed. His crew tried to fix that problem by loading the front tyre to generate more heat and therefore grip. But adding load to the front tyre also subtracts load from the rear, which reduces rear grip and causes wheelspin on corner exits.

In the old days Yamaha’s high-tech traction-control system would’ve fixed that problem, but the Dorna TCS is much lower tech, so Lorenzo couldn’t get rid of the wheelspin. Thus he was caught in the middle, juggling diminished corner-entry grip with corner-exit wheelspin.

This must have come as a nasty shock to the 2010, 2012 and 2015 champion, because before the start of this season he told us that smoother, neater riders like himself would be the masters of the new Michelins and the lower-tech rider aids. He was, of course, completely wrong.

But through all those and dim and dark days, from Mugello in May to Sepang last month, his F**K YOU department was still open for business, still putting things in order for the moment that the technology and the weather swung back in his favour.

That’s what happened last weekend. And it couldn’t have happened at a better moment.

There is no better way to end your relationship with a manufacturer than by dominating the final race, because by doing so you remind them exactly what they are losing. At the same time you loudly announce to your new employers that your talent burns as brightly as its ever done, so they are fully aware of what you can do, when you get a bike that works for you.

On Saturday and Sunday Lorenzo made most of his rivals look a bit second-rate for the first time since Qatar, Le Mans and Mugello. Lorenzo likes Valencia because it’s a narrow, one-line circuit that perfectly suits his inch-perfect, wheels-in-line technique. He is pretty much impossible to beat there – he’s won three of the past four Valencia GPs, leading 88 of those 90 laps.

Anti-clockwise Valencia is demanding on the left side of the tyres but Michelin had tested there and decided they could use probably their softest-construction slicks since they created their super-stiff ‘safety’ construction tyres following Scott Redding’s blowout during April’s Argentine GP. 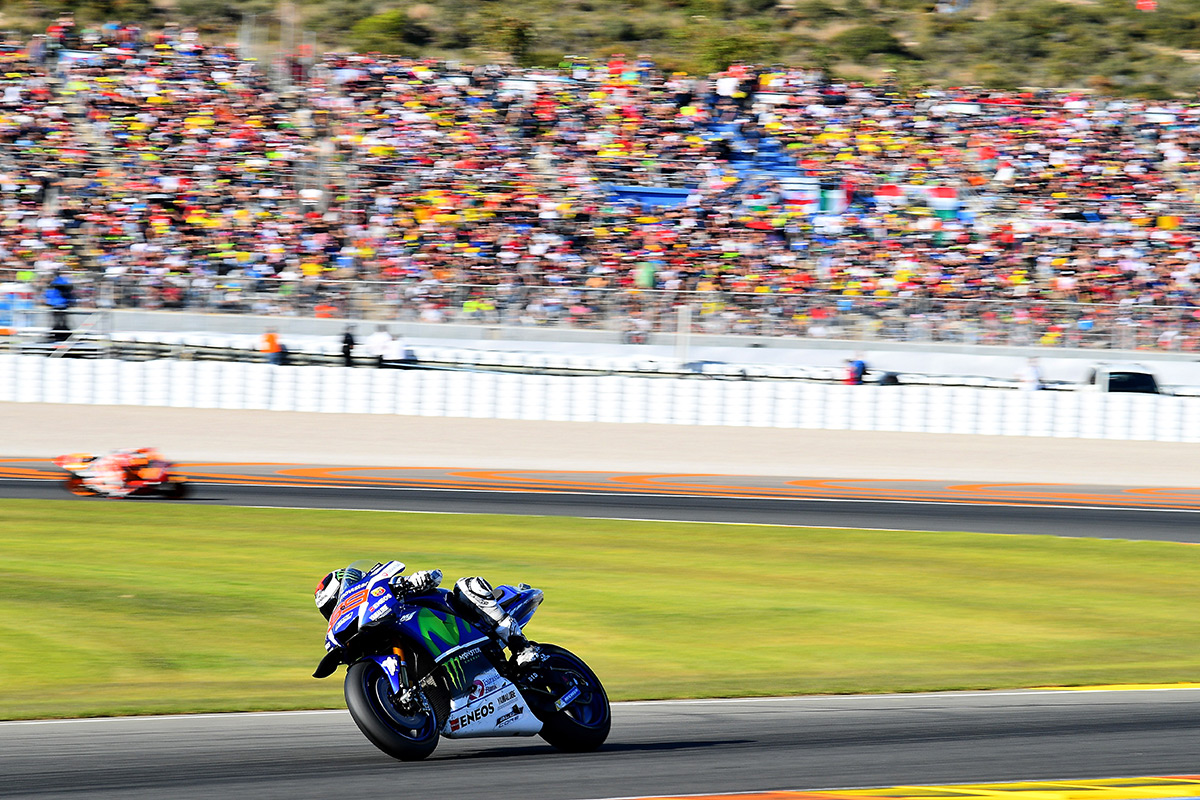 Throughout much of 2016 Lorenzo has struggled to get on with the stronger ‘safety’ tyres introduced after Argentina. He needs a nice, malleable sidewall, so he can get plenty of feel and lots of turning when he’s riding around on the very edge of the tyre. And when he gets what he wants, no one sees which way he’s gone.

The weekend’s weather conditions were also perfect: track temperature was 27 degrees on Friday, 26 on Saturday and 25 on Sunday; plenty warm enough to generate temperature into the tyres without overheating them.

That’s why Lorenzo was so glorious to watch. I spent some time watching him at turn four, the circuit’s first right-hander and the first time the right side of the tyres has touched the asphalt for about 45 seconds. That’s why you get a lot of crashes there, because riders charge through all the left-handers but when they throw the bike onto its right side the right shoulder of the front tyre just isn’t gooey enough to grip the track.

Most riders dive into turn four with a fair degree of circumspection. You can see they are neither confident or comfortable and their lines vary by a good foot or more every time they go through there. Sometimes they get it about right, other times the get it very wrong.

Lorenzo was entirely different: every lap his Movistar Yamaha was totally on its side, his right elbow on the ground, his right knee squeezed between fairing and racetrack, his apex perfect every time, never varying by more than a couple of inches.

How does he do that without crashing? By being astonishingly smooth, by having immense feel for the tyres and the bike, by balancing grip between the front and rear tyres with handlebar and footpeg load, throttle opening, brake pressure, body position and so on. And by staying totally committed to keeping the right side of the tyres hot.

On Sunday Marc Marquez had a good go at bettering Lorenzo’s precision with his frankly much more entertaining technique – manhandling his Repsol Honda, twisting and bending it to his will. The new world champion spent the last few laps teetering on the brink of disaster, chasing Lorenzo like a dog after bone, no doubt having completely forgotten the group of visiting Honda dignitaries in pit lane, nervously biting their nails, fully aware that if he had crashed he would’ve cost Honda the constructors’ world title.

But when Marquez is in that mode there’s no holding him back, no hoping that he will just give up, ease off the gas and cruise home in second place. Anyway, Lorenzo had the race under control. He was confident he could let Marquez shrink the gap without ever letting him get close enough to catch him.

Lorenzo’s 65th pole position and 65th victory for Yamaha were extraordinarily important, most of all for his F**K YOU department. If he doesn’t dazzle everyone when he tests Ducati’s Desmosedici at Valencia this Tuesday and Wednesday, he can point to his weekend lap-time sheets and quietly remind Gigi Dall’Igna about the 1m 29.401s pole position he established on Saturday and the 1m 31.171s lap record he recorded on Sunday.

In other words: his F**K YOU department will announce that no one is faster than him, so Ducati better get to work and build a motorcycle that will do exactly what he wants it to do. 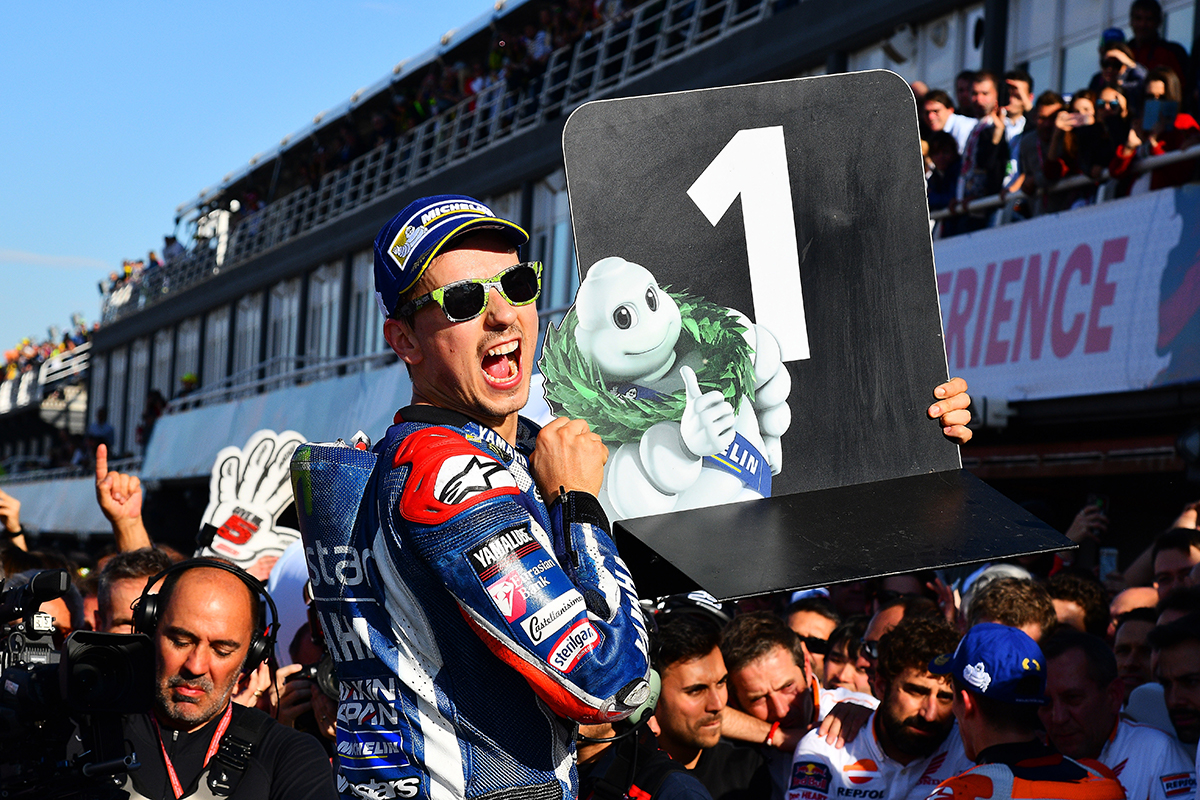