There’s been so much written about bump and grind in MotoGP that I hardly dare add to it. But here goes anyway.

During Thursday afternoon’s pre-event media conference at Sepang, Jorge Lorenzo let loose with a sarcastic appraisal of the one point penalty imposed on wild-man Marc Márquez for his Aragon indiscretion – when his RCV no more than kissed Dani Pedrosa’s, leading to the latter’s downfall. 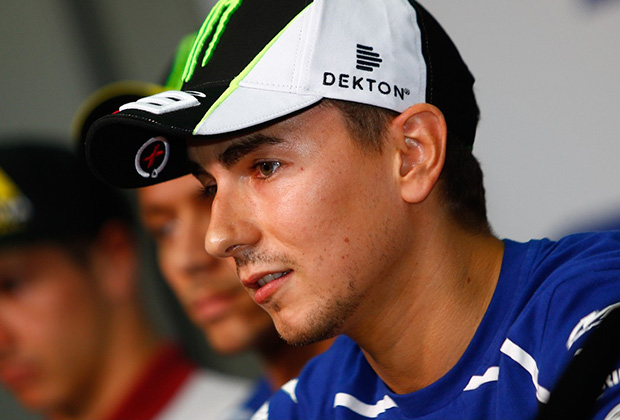 In fact the reigning world champ was quite funny, but his sarcasm was lost on most of the attendant media, possibly because sarcasm is a bit of an English thing and there aren’t many Poms in the MotoGP media.

“Race Direction should have given Marc an extra point for the World Championship,” Lorenzo deadpanned. “This way Moto2 and Moto3 riders would get an example from his riding style and they could do the same, so we could have a better show because rider safety doesn’t matter so much. The important thing is the spectators and that they enjoy the show. Marc’s Jerez action [barging into Lorenzo] was a great show, watching the marshals running like chickens at Silverstone [where Márquez crashed under yellow flags and nearly ran over several marshals] was a great show and when he overtook Valentino [Rossi] outside the track at Laguna it was a great show, so they should incentivise this type of action to make an example to the young riders.”

Lorenzo has been the chief drum thumper whenever the matter of aggressive riding has arisen in recent seasons. He had heated public arguments with Marco Simoncelli on the subject and now he has public discussions with Márquez, who keeps grinning all the way through. Lorenzo’s attitude is usually holier than thou; which is fair enough, because although he used to be a nutter, his riding is generally correct these days and also blindingly fast.

In Sunday’s race, however, Lorenzo finally decided enough was enough – he was going to give Márquez as good as he got, and quite right too. For once, instead of getting mad, he was going to get even.

Rossi and Stoner at Laguna Seca, 2008

His race-day tactics made a lot of sense. He knew his bike wasn’t fast enough to beat the Hondas, so all he could do was try to hassle Márquez into a mistake. In fact, he employed the exact same tactics that Rossi used on Casey Stoner at Laguna Seca in 2008: attack and keep attacking, hoping that he might destabilise the 20-year-old and force him into an error. It certainly worked for Rossi all those years ago – it ended Stoner’s series of runaway victories and changed the course of the championship.

The Lorenzo/Márquez duel that raged during three laps of the Sepang race – while Pedrosa took off out front – was the highlight of an otherwise lacklustre race.

On lap five, Márquez out-braked Lorenzo into Turn One, ran a fraction wide and Lorenzo somehow found the room to come right back past him on the inside, just as he’d done last month to take victory at Silverstone. Superb. Then Márquez returned the favour a few moments later.

At Turn Four Lorenzo once again found the inside line to squeeze past his compatriot, but then he ran wide at Turn 11 and Márquez got his nose back in front, but only for an instant before Lorenzo dived back inside, bumping into his younger rival as they drifted out of the turn. It was a reasonably hefty bump, giving Márquez a minor wobble. Nothing wrong with that, of course: certainly not in my book, nor in Race Direction’s, nor in Márquez’s. 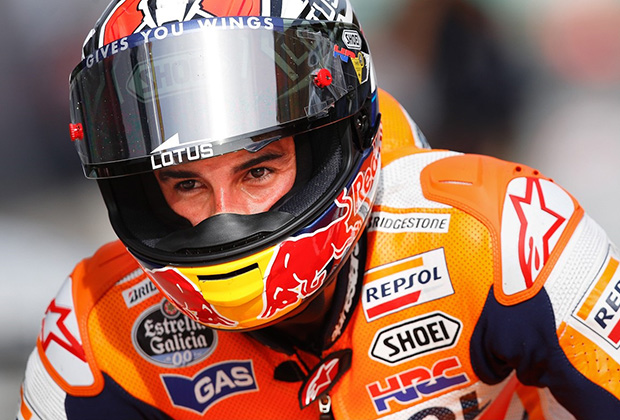 Three laps later Márquez passed Lorenzo for the final time, going under the Yamaha at Turn 14. This is a vital corner, because it leads onto the back straight, and it’s also notoriously tricky because riders are already well banked over on the approach, so they have to brake on the very edge of the tyres. Márquez somehow managed to dive inside on the entry and the pair were side by side on the exit, Lorenzo on the outside. Inevitably Márquez ran out to the kerb, his rear wheel barely on the red and white strip, while Lorenzo was fully on the strip, but still with a good foot of kerb to his left. As they accelerated onto the straight, Lorenzo angrily shook his head.

At first I thought he must’ve been angry at himself for letting Márquez through. Surely he couldn’t be angry at the man whom he had just thumped only minutes earlier?

I was wrong. In the post-race conference Lorenzo did indeed complain about the move. “It was fun until the last overtake from Marc. The fight was really keen but there was no touching [oh, really?]. At that corner he didn’t leave me so much space like in his other overtakes, so I had to close the throttle so I didn’t go onto the grass. It wasn’t so dangerous, but I had to close the throttle.”

In my estimation, what Márquez did at Turn 14 was a completely normal hard pass – nothing to complain about. He was on the inside, his front wheel two feet ahead of Lorenzo’s as they powered out of the corner, so he had every right to use all the track and also the kerb if he wanted to. But this time he used less kerb than usual, which left Lorenzo enough room. Thus the world champ’s complaint was risible. 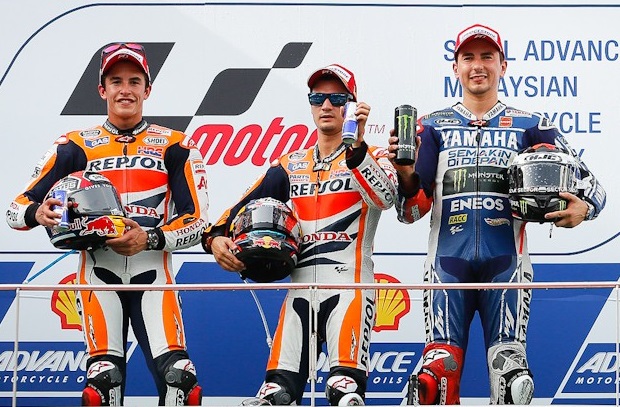 If you want to see how not to conduct this kind of manoeuvre, I refer to you to the infamous Suzuka 2001 incident when Max Biaggi literally elbowed Rossi onto the grass as they swept through the fast right-hander onto the start-finish. That certainly deserved censure, so FIM president Francesco Zerbi wrote an open letter to both of them, because Rossi shouldn’t have been so naïve as to believe that Biaggi would give him the space to pass on the outside. In other words, this is motorcycle racing – you should know you’re not the only maniac on the racetrack.

Zerbi wrote to “reproach you both, in order to invite you to more attentively and correctly control your actions and reactions, without taking anything away from your fighting instinct, your desire for victory, your skill, your courage and the sporting qualities that a true champion shows to all the world.”

Surprise, surprise, Zerbi’s words had zero effect. Ten weeks later Rossi and Biaggi were boxing each other’s lights out at the Catalan GP.

Frankly, Lorenzo’s Sepang complaint was farcical considering his earlier treatment of Márquez. When we asked Lorenzo during the post-race media conference if he had indeed touched Márquez – even though we knew damn well that he had – Lorenzo said, “I don’t know… I don’t remember, but I don’t think we touched.” Then he added, “but if we did it was just a little bit because I didn’t feel a big touch”. 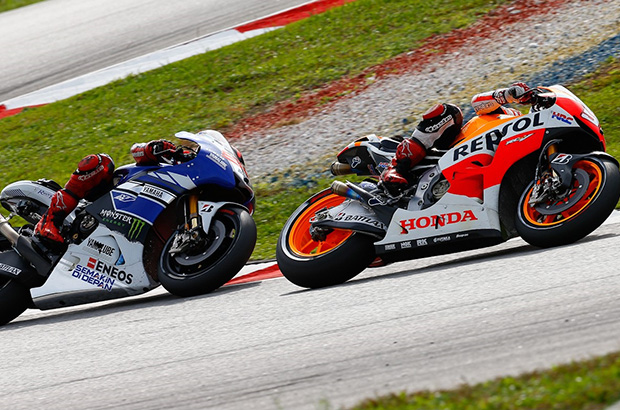 Many riders are in a trance after a race, so it’s possible he had forgotten what had happened in the heat of the battle, but considering the dialogue of recent weeks, that seems unlikely.

Next, someone asked Márquez if he had felt the contact. The kid laughed. “I felt some contact but it was okay, this is racing! He came inside when I didn’t expect and we had some contact, but at that moment it was so exciting.”

In other words, the contact was no big deal, nothing like some of Márquez’s moments of recent years. But it’s bizarre that Lorenzo didn’t just admit what had happened, and laugh about it, just as Márquez did. His problem is that he’s talked himself into a corner, criticising Márquez at every turn, so he can hardly condemn a rival and then admit that he has just committed a similar crime.

True, Lorenzo is an unhappy man at the moment – he’s riding better than ever and yet he’s losing the title while Yamaha have lost their technical advantage to Honda – but that’s no excuse to speak such nonsense. 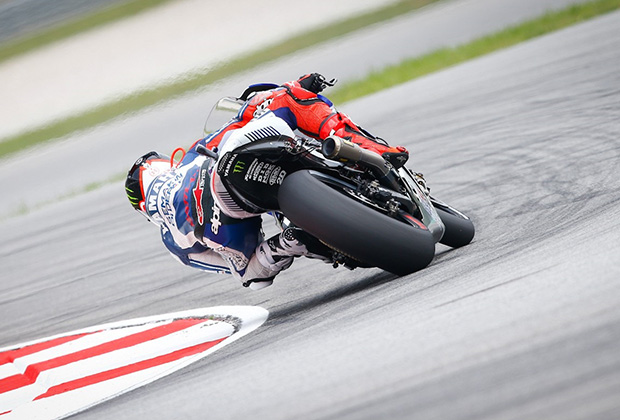 As Jesus says in the Bible: “Thou hypocrite, first cast out the beam out of thine own eye; and then shalt thou see clearly to cast out the mote out of thy brother’s eye.”

That’s enough of Jesus. I shall leave the final word to a rider.

“Marc rides very hot,” said Cal Crutchlow at Sepang. “But some riders make a controversy of it for no other reason than they’re annoyed they’re getting beaten; simple as that.”

Click here to read more from Mat Oxley on MotoGP