The Spaniard has won all three titles in MotoGP’s new era of make-it-up-as-you-go-along riding technique. Next comes MotoGP’s Senna/Prost moment 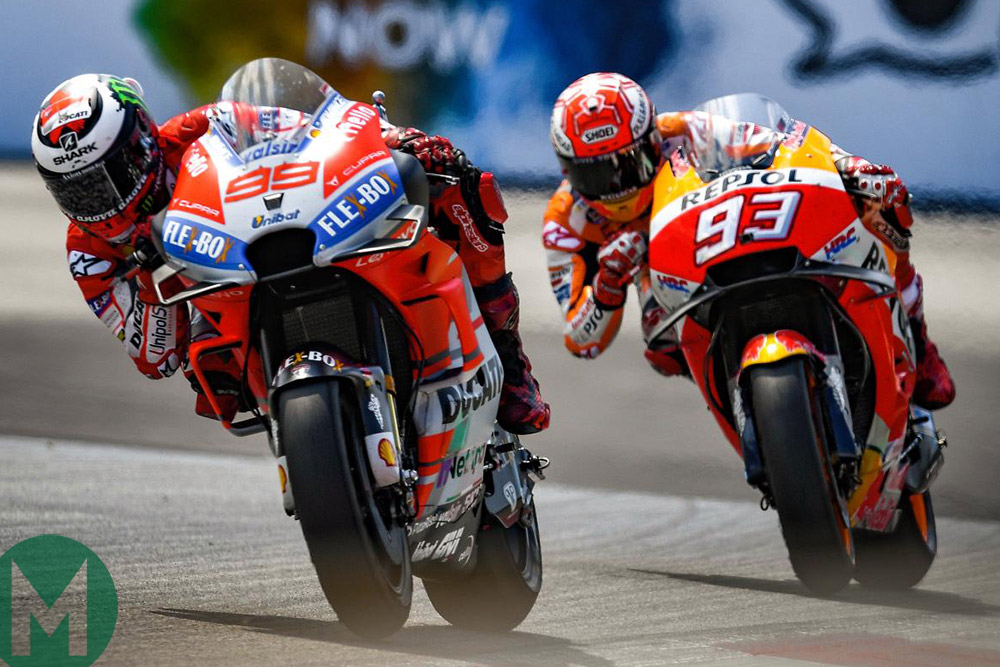 No motorcycle racer is unbeatable. Mick Doohan ruled the 1990s with an iron fist, dominating five consecutive 500cc world championships and leaving everyone waking up on Sunday mornings wondering who would finish second. Then, in a millisecond, his reign was over when he momentarily strayed onto a damp white line at Jerez in May 1999.

Marc Márquez isn’t unbeatable. Jorge Lorenzo, Dani Pedrosa, Valentino Rossi and others have already proved that. But, right now, he is about as invincible as it gets.

His psyche is like a fortress and his talent is like a troop of ridiculously brave elite cavalry that sallies forth, laying waste to anyone who comes close. If you’ll excuse the analogy, he is a 21st century El Cid, the famous 11th century Spanish warrior who conquered Valencia in the 1090s and was mostly loved by his subjects.

Márquez didn’t conquer Valencia last weekend. His trophy cabinet may have ended 2018 full of silverware but he ended the season with a face full of gravel, the victim of the biblical downpour that turned the last race of GP racing’s 70th season into a demolition derby.

The whole weekend was miserable – a gloomy end to a dazzling season – and Márquez could have been forgiven for taking things easy. He had already won the riders’ world title, helped Honda win the constructors’ world title and needed only to cruise around to claim a few points to give Repsol Honda the teams crown. Especially considering his super-weak left shoulder, which he had already dislocated on numerous occasions, most recently when it popped out while celebrating with Scott Redding at Motegi.

But Márquez has no off switch – no cruise control – like all the true greats. As soon as they contemplate easing off a bit, shifting down a gear, maybe looking at the view, they are finished.

This is why I think the truly momentous moments of Márquez’s sixth season in MotoGP weren’t his race wins at COTA, Jerez, Le Mans, Assen, Sachsenring, Aragón, Buriram, Motegi and Sepang, but his qualifying crashes at Misano and Valencia.

You may remember his Q2 tumble at Misano (below). He was pushing on when he lost the front into the 90mph penultimate corner. It was a big crash. And yet as his RC213V self-destructed in the gravel he segued from rolling to running without missing a beat, grabbed a scooter ride back to the paddock, ran through his garage and jumped onto his second bike, all in just two minutes and 17 seconds. 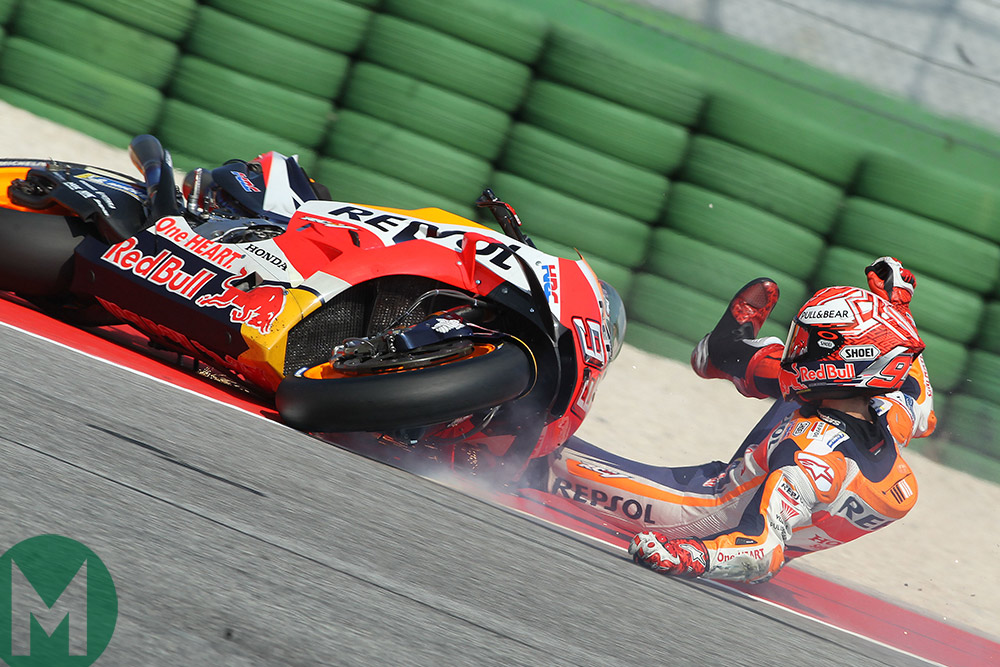 Once again, he pushed for pole position, but his tumble had filled his eyes with dust, so he landed a spot on the second row.

Although Márquez appeared uninjured from that tumble, the fall must’ve aggravated the left shoulder he first dislocated at Silverstone in 2013, because from the next race at Aragón he had the shoulder heavily taped, in an effort to reduce the chances of the arm popping out of the socket again.

On Friday at Valencia it was cold and already pouring down – woolly hats, winter coats and waterproofs up and down the pitlane. With rain forecast throughout the weekend, perhaps Márquez might have given himself a break and slowly got up to speed on the slimy track, but he was immediately risking it all and ended FP1 on top. In FP2 he was second fastest, in FP3 a very close third fastest. In the damp FP4 outing he was fastest by more than half a second over the next man.

In qualifying he went for it again, running slicks on a mostly dry but still-cool track. At the start of his first flying lap he was already tucking the front at turn one (Aspar) and then he reached turn four (Nico Terol), the anti-clockwise track’s first right-hander, with a downhill entry, where the right side of the tyres haven’t touched the asphalt in almost half a minute.

Márquez was in that catch-22 situation that affects every bike racer when the track temperature is low: push too hard to warm the tyres and crash, or crash because you haven’t pushed hard enough to warm the tyres. Obviously, Márquez goes about his business via option one.

Just like Misano, the front folded as he tipped into turn four. And once again he went cartwheeling through the gravel trap, but this time he was already holding the shoulder, which had dislocated once again, before he had stopped rolling. He got up, bent double in agony and staggered to the tyre wall, where he stood grimacing with pain.

Turn four (Rio) is a popular place with trackside spotters, so mentor and manager Emilio Alzamora was there with a scooter to chauffeur his rider back to the paddock, where his crew helped him into his team truck, where the humerus bone was relocated in its socket. Six minutes and 18 seconds after the crash he was back on track aboard his second bike, which he took to within 0.130sec of pole.

Make no mistake, this is MotoGP’s Senna versus Prost moment…

Of course, Márquez isn’t the only MotoGP rider with almost superhuman capabilities, but he’s certainly the most successful.

It’s not only his riding ability when he’s on his bike and his pain-resistant power when he jumps off it that makes him so hard to beat. It’s his whole attitude. Remember when Jorge Lorenzo inflicted that stunning last-lap defeat on him at the Red Bull Ring in August?

Lorenzo pulled some heavy moves on his great rival that day, most memorably a Márquez-like block path as they went into the final lap, which left Márquez slithering and sliding on the brink of oblivion.

Did Márquez complain? Not at all. In the ante-room that takes riders onto the podium at the Red Bull Ring the winner and runner-up relived their battle as racers do: jabbering away at each other at 900mph. Both of them were laughing and joking. Which you might think odd. You would expect Lorenzo to revel in the moment. But not the vanquished. Surely, Márquez should’ve been muttering dark curses of revenge out of camera shot, not giggling as he mimed that moment when he teetered on the brink alongside Lorenzo?

When you win a race you want to see the loser holding his sweaty head in his hands, tortured by defeat, angry with himself, angry with the rest of the world. So what do you do when he thinks it’s all just a laugh?

Márquez may have won five of the last six MotoGP titles, but more interestingly he has won every championship since the introduction of Michelin tyres and same-for-all electronics.

The 25-year-old is the undisputed king of this new age of make-it-up-as-you-go-along riding technique. He won the 2016, ’17 and ’18 titles by using his otherworldly riding skills, his cat-like reactions and his ability to work things out with crew chief Santi Hernández and HRC technical director Takeo Yokoyama.

Without the loving embrace of tailormade factory software and the frankly ridiculous amount of corner-entry grip provided by Bridgestone’s front slick, riders have been left naked and afraid since the start of the 2016 season. During those three seasons they have had to adapt race by race, track by track, to the ever-changing tyres and the below-par electronics, using their own talent to do what technology once did for them.

What about the immediate future? Márquez now has Lorenzo for his new team-mate. And there is no tougher team-mate in MotoGP. Over the past decade and a half, Rossi broke all his rivals – Max Biaggi, Sete Gibernau, even Casey Stoner – but there have been two riders whose cages he couldn’t rattle, either on the track or off it.

The fortresses of Márquez and Lorenzo still stand undefeated by Rossi. And they didn’t just survive Rossi’s mind games and track moves, they went out and conquered his fortress.

So now those two rock-solid psyches find themselves together in the same garage; plotting each other’s downfall. Make no mistake, this is MotoGP’s Senna versus Prost moment. In fact, it’s more than that because Ayrton Senna and Alain Prost had not won the previous seven world titles between them.

Senna was the new kid when he joined Prost at McLaren-Honda in 1988, but he beat Prost to that year’s Formula 1 title. The theory goes that Márquez will have the upper hand over Lorenzo in 2019, because he’s already had six years to understand the RC213V, while Lorenzo may have to divine an entirely new riding technique, just like he did with the Ducati.

Márquez should be strongest on the 2019 RC213V, but I don’t go with those who suggest Lorenzo will never win a race with Honda. The 2018 season told us that the three-time MotoGP champion has reserves of mental fortitude and versatility we never knew existed. Who knows what he can dig up in 2019 and 2020?

I don’t know who’s going to win and I don’t want to know. All I do know it that it’s going to be epic watching: on the track, in the garage and everywhere else…

Can Aprilia fight for its first MotoGP victory in 2022?