Motegi guzzles more fuel than just about any other MotoGP circuit, which is why race-winner Marc Márquez only just made it to the finish: Grand Prix of Japan race insight 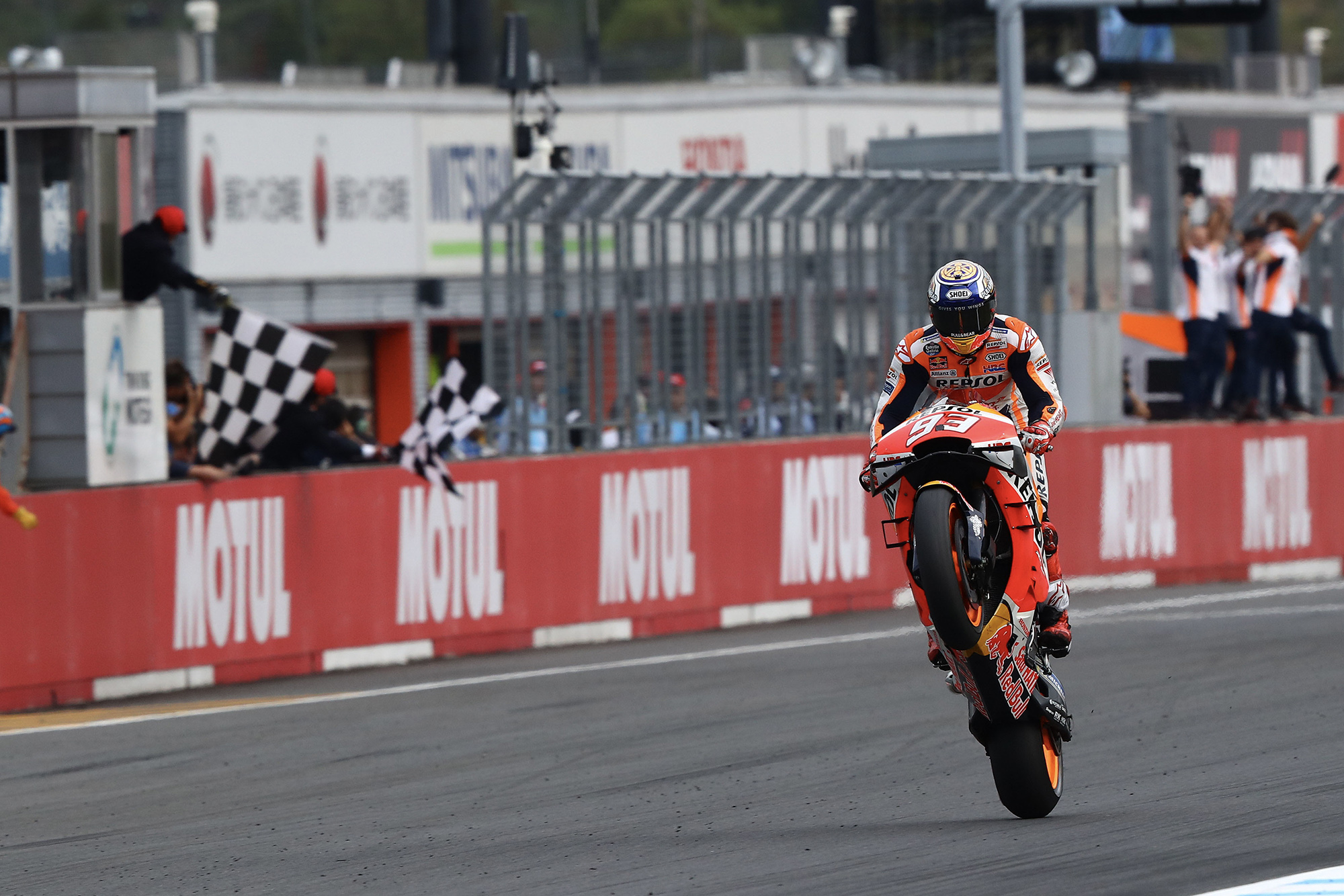 Marc Márquez entered Mick Doohan territory on Sunday, in more ways than one. At Motegi he won his 54th MotoGP race, equalling the Australian’s 54 500cc victories, won between September 1990 and October 1998. No one else has achieved more victories on a Honda.

The Spaniard’s tenth win of 2019 was also his fourth on the trot; in other words he’s starting to make his rivals wake up on Sunday mornings wondering who’s going to get second. Which is exactly what Doohan liked to do.

Doohan famously said that motorcycle racing is 90 per cent psychological – that you can defeat your rivals even before you climb aboard your motorcycle. I don’t think Fabio Quartararo was beaten before he rode his Petronas YZR-M1 out of pit lane on Sunday afternoon, but whatever he tried in an effort to overcome the world champion didn’t quite work.

Racing is not all about opening the throttle as far as it’ll go. It’s more complicated than that.

The remarkable rookie chose the soft-option rear tyre in the hope that he would be able to get the jump on Márquez in the tricky first few laps, when tyres aren’t yet up to optimum temperature, so he could run the Yamaha’s fast, flowing cornering lines and make his escape.

But Márquez was stronger right away, using a medium rear, even though that tyre had given him a few scares in Friday afternoon’s cooler FP2 session. And because Saturday was mostly wet, there was no real data to tell anyone which would be the best choice for Sunday.

And because the race didn’t start until 3pm, with track temperature already dropping with the sun, Márquez’s fellow front-row starters Quartararo and Franco Morbidelli made last-minute changes from medium to soft rears.

And yet the only problem that nearly did for Márquez was running out of fuel, which would’ve been a bit embarrassing at Honda’s own racetrack, built by the company in 1998 as a 50th birthday present to itself. 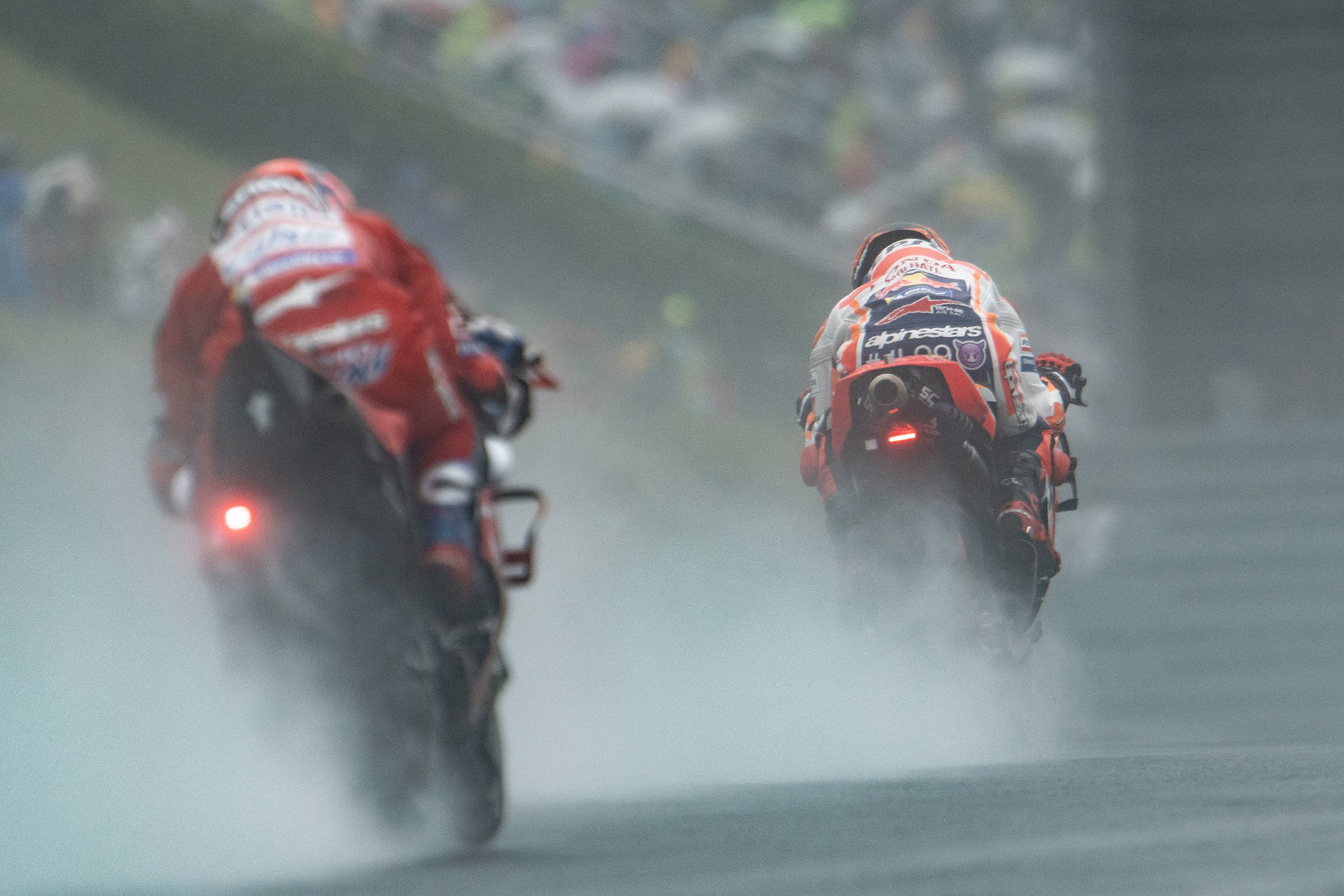 The Motegi layout burns more fuel than just about any other MotoGP venue, with bikes burning gas accelerating out of low-gear corners five times each lap. The other tracks that also come close to emptying a MotoGP bike’s 22-litre fuel tank are Red Bull Ring, which is basically three drag races each lap, and Losail, where the oxygen-dense night-time temperature demands a rich, fuel-thirsty setting from the bike’s engine-management system.

When you’re running low on gas and rubber and you’ve got a talent like Quartararo behind you, it can’t be the most comfortable feeling in the world

Márquez always knew fuel would be tight on Sunday. Indeed, he had seriously considered doing what he had done at two of the three previous races: slipstreaming a rival throughout the race, to save fuel, then pounce at the finish.

But he felt so good on the bike in morning warm-up that he decided to have a go at destroying everyone in the first few laps, then focus on managing fuel consumption by riding smoothly, especially by minimising wheelspin. Nothing wastes fuel more than wheelspin – because you’re burning fuel spinning the tyre instead of driving forward.

And yet halfway through Sunday’s penultimate lap, with 4.5 miles still to go, his Repsol RC213V’s low-fuel alarm activated. At this point Márquez had a 2.3-second lead, but in the next half lap he lost half a second to Quartararo and in the last lap he lost another full second. It’s easy to say now that he had it all under control, but when you’re running low on gas and rubber and you’ve got a talent like Quartararo behind you, it can’t be the most comfortable feeling in the world.

However, if Márquez was worried he never let it show after the race. Once again, psychology is (almost) everything.

Perhaps things would have been different if Quartararo had chosen Michelin’s longer-lasting medium rear instead of the soft, which he overused in his pursuit of the leader. That’s why Andrea Dovizioso, who also chose the medium rear was able to drop Maverick Viñales (who also used a soft rear) and nearly stole second place from Quartararo in the final laps.

None of this would’ve happened a few years ago. Until 2016, when Dorna introduced its low-tech, let-the-rider-do-the-work software, the bike’s little black box looked after tiresome matters like fuel consumption.

The rider didn’t need to distract himself from his real job – which is to ride his motorcycle as fast as he dares – by thinking about rolling the throttle to save fuel, because the engine management system did all of that for him. If the bike’s computer calculated that he was using too much fuel to make it to the finish line then it simply reduced torque delivery and therefore fuel consumption.

Riders really, really hated that. Imagine being in a frantic battle for the final podium position, trying to work out where you’re going to nail your rival on the last lap, when your engine mysteriously loses a few horsepower and there’s nothing you can do about it except get beaten and sulk back to pit lane with no invite to the podium party.

MotoGP’s current and (thank the gods) less intelligent engine-management software returns this job to the rider’s brain and his right wrist, so he once again has to think about more than simply stretching the bike’s throttle cable (okay, its ride-by-wire system).

And before you complain that this is a nonsense, because MotoGP is a motorcycle race, not a fuel-conservation run, racing has always been thus. Over the decades many, many riders have lost races because they burned all their fuel before they reached the chequered flag. Racing is not all about opening the throttle as far as it’ll go. It’s more complicated than that.

MotoGP’s shift away from self-calculating motorcycles makes life more difficult for everyone, not only the riders. During practice each team’s data engineers spend hours and hours examining fuel-consumption figures. They know exactly what happened on each and every lap of practice. Was the rider on his own? Was he hiding in someone’s slipstream? Was he using a lot of wheelspin to make the lap time. Or was he riding more smoothly, with the wheels in line? And what was the fuel consumption during each of those laps?

The engineers extrapolate all that data to create the torque maps that the rider uses in the race, as well as the engine-braking, traction-control and anti-wheelie maps. All this is done in unison with the rider, so he knows exactly what to expect from his engine. This is vital because the rider needs to adjust his riding technique accordingly, perhaps focusing more on corner speed if he won’t have as much torque as he would like.

All the riders know they must think about fuel consumption all weekend at Motegi, even before they start racing. The race is 24 laps – 71.6 miles – but before it starts riders have to ride the sighting lap and the warm-up lap, which brings the total mileage to 77.6 miles. That means they must eke 16 miles per gallon (18 litres per 100km) from their 280-horsepower engines if they want to see the chequered flag. 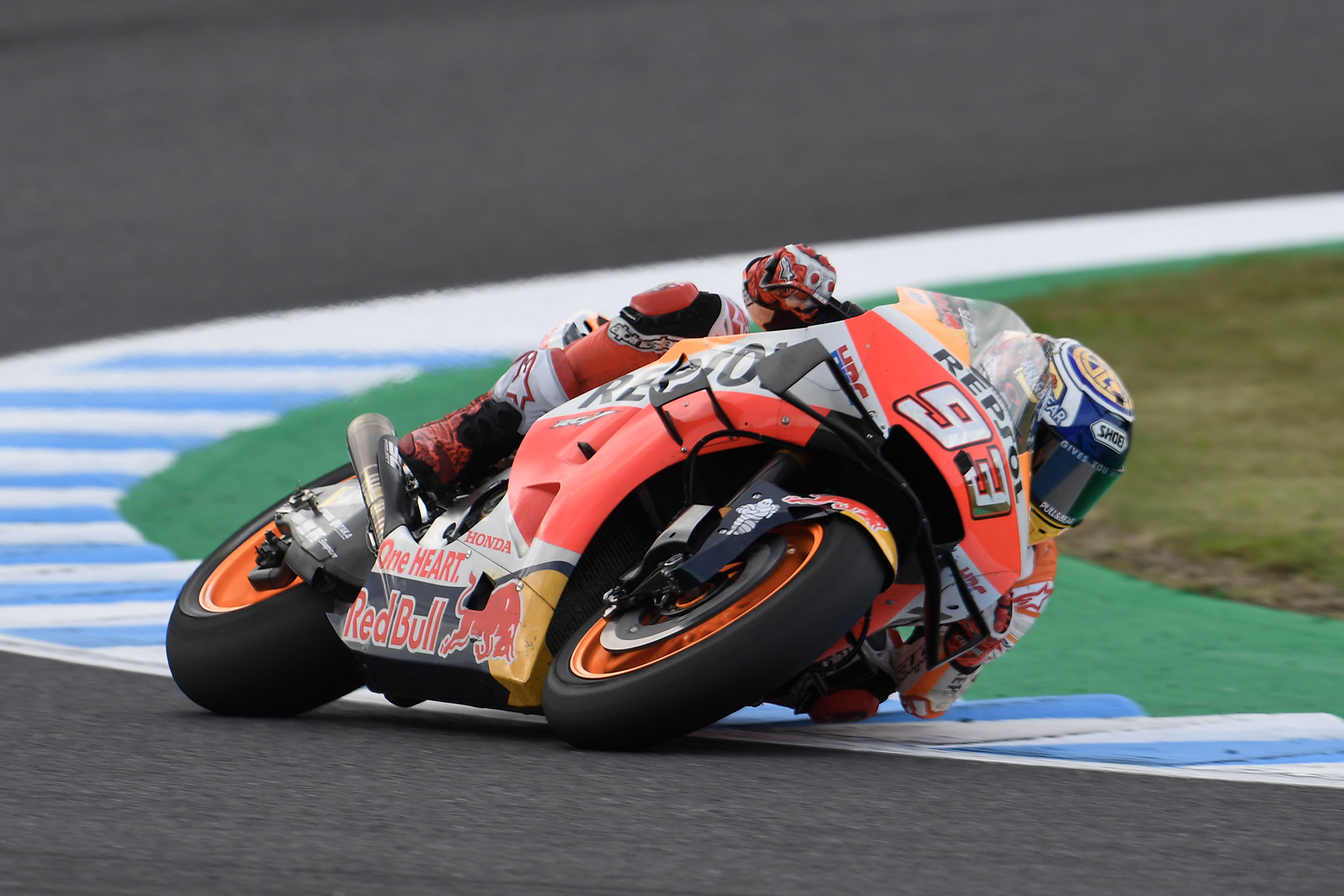 Márquez can do this — and change torque settings Photo: Motorsport Images

Márquez rode the sighting lap in full cruise mode – using gentle throttle openings on the straights and tucking in behind the screen to reduce drag – because every drop counts.

However, the warm-up lap is trickier. Do you gas it up to warm the tyres so you don’t crash at the first corner, or do you take it easier so you don’t run out of fuel at the last corner? Decisions, decisions.

Once the lights go out the rider is on his own, but he does have buttons on the handlebar, so he can choose between three different torque-delivery maps. Sometimes riders will change the map only three or four times a race. Other times they will change maps much more frequently, perhaps switching to a softer, less thirsty map through the twistier parts of the circuit, then reverting to a stronger, more powerful map as they reach a faster sector, where they need maximum acceleration and top speed.

Márquez played with his torque-map buttons throughout the race, according to deep advice from his HRC technicians.

Consider the reality of doing this while you’re riding on the absolute edge, braking till the front tyre locks into corners, exceeding 60 degrees of lean through corners and accelerating out of corners with the rear tyre squirming sideways

So when a rider tells a TV camera that he’s going to “give gas” from start to finish, you know he’s not necessarily telling the truth.

On Sunday Márquez gave gas as much as he dared and ran out of gas halfway through the slowdown lap, which means he crossed the finish line with perhaps half a litre of fuel in his fuel tank; that’s a mug of coffee’s worth of gas. Hafizh Syahrin was kind enough to give him a push back to pit lane.

Firstly, Márquez’s close-run finish showed how close he had come to a red-faced defeat. Secondly, it showed that HRC’s number crunchers had done their job perfectly.

There’s an old racing adage (which no longer holds in this era of compulsory engine durability) that the perfect engine will blow itself to smithereens at the exact moment it crosses the finish line.

And that’s what racing has always been about: riding the knife edge all the way from the factory race shop, to the pit-lane garage to the track.