Marc Márquez has said that he will be back on track sooner rather than later, as he continues to recover from the broken arm that has taken him out of contention for this year’s MotoGP title.

Last month, Honda said that he would be out for a further two to three months, and the reigning champion still hopes that he will be competing at least by the final round of the season at Portimao in November.

“I will come back to the top,” said Márquez, in an interview released by his Honda team. The 27-year-old said that he now has normal movement in his arm and is back in training after being forced to rest “on the sofa” for a month, following the mid-July crash at the season-opening race in Jerez.

A taped scar from the two operations on his fractured right humerus was visible in the footage from his home in Cervera, Spain, where he’s working with a live-in physio in a bid to get back on his bike as soon as possible.

“Now I’m in a good moment but its still far from my normal level,” he said. “The most important is that all the movements are ok.

“I started to do some running and cycling; the legs and the left arm, my condition is quite good. But about the right arm, still I need to make some big steps.

“My physio Carlos, he is living in my house, we will start to work hard to improve, following the correct steps in the correct time.

“I start to feel the big steps with my body. So now every day, every week, I feel something different… I start to feel some improvements.  I know that I am closer to being on a bike, that is the most important. I know that we are in a good way, but I don’t know if I will be on the bike in one month, in two weeks or in two months. I don’t know this; this is something that my body will answer.

“I hope to come back as soon as possible. I feel that it is more soon than late. No worries that I will come back to the top.”

And if you want to hear EVERYTHING the World Champion had to say… pic.twitter.com/A8oVfRzjEA

Márquez fractured his arm in this season’s opening race at Jerez. He had made a thrilling recovery from 18th to third after an early slide, when he was flung from his Honda in a high side crash. The front tyre of the bike hit his right arm, fracturing his humerus.

Incredibly, he was back at the circuit the following weekend, and was declared fit to qualify for the Andalusian Grand Prix. But he abandoned qualifying and has not raced since. 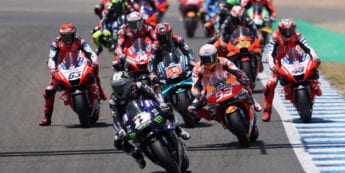 Márquez revealed that the aftermath had been difficult to deal with, as he was forced to stop training and rest completely. “It was four to five weeks completely on the sofa watching TV,” he said. “It was hard at the beginning. Nothing to do at home. The hours were very long.”

The tight championship battle hasn’t helped either, as the eight-time champion contemplated the missed opportunity to add to his string of titles.

“It’s the most difficult, to watch races at home,” he said. “You are there watching the practice, watching the races, you would like to be there. Then when you see that it’s so equal, many different winners during a season and you see that they have only 84 points after so many races you become even more motivated to come back.

“It looks strange that after seven races I am only 84 points behind the leader, and I have zero!”

Asked to pick his favourites for the title, the Honda rider sat on the fence, questioning what had happened to Fabio Quartararo’s early season form.

“In Austria I said Quartararo or Dovizioso but, honestly speaking, I expected more from them. Especially from Quartararo, I expect much more because he won the first two races with an incredible level and now, I don’t know what is going on. He struggles a lot, even in one of his strongest points: Qualifying practice.

“Dovizioso is consistent, he is there but he needs more speed if he wants to win the title and we see that Viñales is there, Mir is there, I mean we have eight, nine riders within 25 points so it will be interesting to see the end of the season. And yeah, we will try to experience the show from the inside!”

He thanked fans for the many messages of support and said that he was in touch with brother and team-mate Alex during each race weekend of his tough MotoGP debut season.

In Marc’s absence, Honda’s riders have struggled to come close to his performances on the RC213V, but Alex recorded his best result of the season last weekend, climbing from 17th to seventh on the grid.

“Alex is in a difficult situation,” he said. “When you have a rookie rider on the other part of the garage [and] one driver out from the first race.

“It now looks like it’s normal. I try help Alex. I try on the Thursday when they have the tyre allocation, he send me the photo and I try to give some advice.”

Even so, last weekend was a tough one for a team riddled with right arm injuries, however, with Marc’s replacement, Stefan Bradl and Cal Cruthlow sidelined with their own right arm issues.