Marc Márquez and his Honda team have announced that the eight-time world champion will miss the opening two rounds of the 2021 MotoGP season in Qatar, delaying his comeback from injury.

“After the last review with the medical team, the doctors have advised me that the most prudent thing was not to take part in the Qatar Grand Prix and to continue with the recovery plan that we have followed in recent weeks,” Márquez said in statement.

“I would have loved to be able to participate in the opening race of the World Championship, but we will have to continue working to be able to recover the optimal conditions that allow us to return to competition.”

Márquez broke his right humerus during last season’s Spanish GP, and an aborted return at the Jerez the following week, just days after surgery, was the last time the six-time top class champion has ridden a MotoGP bike since then. 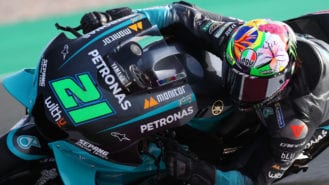 A second operation resulted in an infection which necessitated surgery for a third time, preventing the Spaniard from riding a bike for eight months.

Recently, Márquez and his team posted videos of himself riding practice bikes and reported positively on his recovery, making a comeback at Qatar seem like a possibility.

Although his return has been delayed further, a statement from HRC said the doctor’s prognosis remains positive.

“In the review carried out on the Spanish rider by the medical team led by Doctors Samuel Antuña and Ignacio Roger de Oña, and made up of Doctors De Miguel, Ibarzabal and García Villanueva, 15 weeks after surgery for an infected pseudoarthrosis of the right humerus, a good clinical response has been found after the intensification of his training,” HRC said in its statement.

“However, considering the time period and the current state of the bone consolidation process, doctors consider it prudent and necessary not to accelerate Marquez’s return to the track after such an inactive time, and to avoid putting the humerus at risk in intense competition. Marquez will undergo another medical check on Monday, April 12.”

In spite of his enforced absence, Márquez still has a good chance of winning the 2021 title: in 2019 he won the championship with 420 points compared to Andrea Dovizioso’s 269.