MotoGP hadn’t seen anyone like Marco Simoncelli for quite a while. He was a rough diamond washed up on a beach of smooth pebbles.

The tall, ambling Italian was very different to many of the riders with whom he shared the grid. He wasn’t a cold-blooded analyst who played the percentages. He was a red-blooded heavyweight fighter who came bouncing into the ring, wearing a maniacal grin, ready to punch everyone’s lights out.

He was what gonzo author Hunter S Thompson called “a hell-for-leather pilot”, a “kick the tyre, light the fire and away we go” hero. Even his father, Paolo, called him a warrior.

There was no holding back in Simoncelli’s world, no thinking (or at least only very occasionally) that fourth place would do when he could spy a podium finish a few seconds ahead. He loved a fight, usually went looking for trouble and believed that was the correct way to go racing. He raced by chasing whoever was in front of him, not by checking his pit-board to make sure he was running the correct pace as calculated by his engineers.

“For me the right way to go racing is like the old-style racer. I don’t like the new style.”

“At this moment in MotoGP there are two styles of rider,” he said during an interview at Silverstone in June, 2011. “There is the old-style rider – me, Rossi, Spies, Edwards, Capirossi, de Puniet and maybe some others – and then there are the others – Lorenzo, Stoner, Dovizioso and Pedrosa. For me the right way to go racing is like the old-style racer. I don’t like the new style.”

Simoncelli’s aggression and his impatience ensured that he made mistakes but, more importantly, he was learning from them. During the latter stages of 2011 he had moved beyond the looping, body-crunching highsides to less injurious low-sides. Certainly, the crash that killed him should not have done. He simply ran out of luck on that day at Sepang, almost exactly three years after he had wrapped up the 250 World Championship at the same track.

Like his great friend Valentino Rossi, Simoncelli seemed larger than life. He was one of those riders about whom it was easy to get excited – you’d watch him on telly and you’d be willing him on, delighting in his audacity. He threw everything he had at going absolutely as fast as he could and when he got off the bike he would bubble over with the thrill of it all. Looking in from the outside, you can’t ask for more than that from a rider.

MotoGP riders inhabit a hellishly stressful world. It’s a scorching, dangerous place where only very special people flourish. These men are under massive pressure to perform on the racetrack, then they return to the pits where they are endlessly interrogated by their engineers and then again by the media.

It is no surprise that many riders have their minds elsewhere when journalists finally get to them and start poking cameras and microphones in their faces. They are consumed with finding a hundredth of a second through that corner or they are considering suspension clicks, engine maps and tyre compounds. The only thing they are sure of is that these journalists aren’t going to help them go one teeny-weeny bit faster. In other words, it’s all a waste of their time.

Simoncelli wasn’t like that. The first few times I spoke with him were during post-practice media scrums in the back of the Gresini pit, where a hubbub of Italian journalists and cameramen literally fought for his attention while he stood there, sweltering in his leathers, adrenaline still pumping through his veins, sweat streaming down his face. 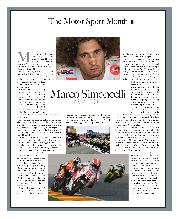 Marco Simoncelli wasn’t your average 21st century MotoGP rider. He was a throwback to the old days: scruffy and wild, always determined to barge his way to the front, never…

Most people would want to shrink into a foetal ball in such a situation, but he found the chaos hilarious, grinned throughout and answered everyone’s questions. He knew that this was part of the deal of making it to the top. On one of those occasions his (always) gyrating hands made contact with my voice recorder and sent it flying through the air. As it landed on the far side of the pit he was already laughing and saying sorry.

He was one of those riders who seemed genuinely happy to make a connection with you, he didn’t treat you with suspicion or derision. During interviews he was open and honest, not afraid to say good things or bad things about other riders, nor indeed about himself. He admitted that his mistake at Assen in June 2011, when he crashed at the first left-hander and took out Jorge Lorenzo, “was a very stupid mistake… I will try not to repeat it”.

He took criticism on the chin and knew he would put such mistakes behind him and get better.

His English, spoken in that unmistakable baritone voice, was good. Languages (and mathematics) were his strong points at school where he was a good, though mischievous pupil. “I never stay at my desk, I always go around the class and speak with the other children. I was always… agitated.”

As an adult he was the same: always up for a laugh, always trying to find humour from every situation. He was scruffy and he was goofy, but he didn’t care and that made him lovable. Fans adored him because he was a madman on the racetrack and yet warm and open in normal life. He was the polar opposite of a MotoGP robot. He seemed to have no pretensions or affectations – he was just a nice guy with a serious speed addiction. Even when he was away from racing he enjoyed life at full throttle: “motocross, kart, disco, ski…”.

And then there was the hair, which grew according to his reputation. When he first arrived in 125 GPs it was short and neatly cut. By the time he started winning 250 GPs in 2008 it had mushroomed into a wild mane that became his trademark. Eventually he had to keep it under control with an alice band, just as Rossi had done with his teenage mop.

“If I have a problem with somebody I try to speak to them. I don’t go to the teacher to cry.”

Beyond his desire to be a sportsman, Simoncelli didn’t have great ambitions. He believed that if he hadn’t become a racer, he would’ve ended up working in his father’s ice-cream shop in the Adriatic beach resort of Cattolica.

His friends in the paddock were Valentino Rossi, Mattia Pasini, Raffaele De Rosa and Alex Baldolini. Simoncelli was only nine years old when Rossi started in GPs, so he was one of the first Valenteeniboppers.

“I like him from the beginning because he was crazy and he make some overtakes that the other riders don’t like so much,” said Simoncelli, whose other great racing hero was Kevin Schwantz, whom he had watched on TV as a young boy. He had posters of both of them on his bedroom wall. It was from these tough, fighting men that he learned his gung-ho attitude.

Simoncelli met Rossi for the first time at Assen in 2002 – “an emotional moment” – when he was contesting the European championship that ran the same weekend as the Dutch TT. Their relationship changed – from superstar and fan to a grown-up friendship – when Rossi started taking an interest during Simoncelli’s rookie 250 season in 2006. The MotoGP champ offered advice and did so again when Simoncelli arrived in MotoGP in 2010. But Rossi knew when to stop helping – when Simoncelli started beating him.

By the time of his death they were no longer master and pupil, but great friends and rivals who were learning from each other. “Valentino and I still meet sometimes in the evening and talk about the track,” said Simoncelli. “Sometimes I ask him questions and sometimes he asks me questions.” Rossi said that his fallen friend had become “like a little brother”.

Simoncelli’s eagerness to get to the front made sure that he also had enemies in the paddock. His critics claimed he was mad, bad and dangerous. Rossi’s experienced mechanic Alex Briggs disagreed. “The only reason they don’t like Marco is because he’s new and he’s fast, simple as that,” said Briggs. Simoncelli was battering on the door of the alien’s hideout and some of the aliens were scared. 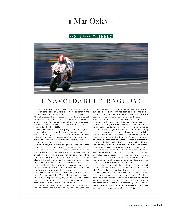 The hypocrisy of his biggest critics was jaw-dropping – they had all committed crimes similar to those committed by Simoncelli. The reality is that most riders are prepared to win by any means necessary while they are on their way to the top, but once they get there they want everyone to follow in an orderly fashion. Simoncelli had no intention of doing anything in an orderly fashion.

What irked him most was that the knockers preferred to complain to Race Direction, rather than sort out their differences with him face to face. “If I have a problem with somebody I try to speak to them,” he said. “I don’t go to the teacher to cry.”

But it’s important to remember that by no means all his rivals considered his riding was over the top. Men like Colin Edwards, Ben Spies, Loris Capirossi and Cal Crutchlow all spoke in support. Edwards was typically robust in his defence. “You don’t bring gladiators to an opera – we are here to fight,” he said. “I don’t think Marco is overly aggressive – he just enjoys the fight.”

Simoncelli rode his last few laps at Sepang like he rode every lap, fighting back and forth with old 250 rival Alvaro Bautista, no quarter asked, none given, just the way it should be.

Who will excite us now?

You can donate to the Marco Simoncelli foundation – a humanitarian charity set up by his family by clicking below.