How does Marquez ride the way he does – apparently always over the limit – and get away with it? 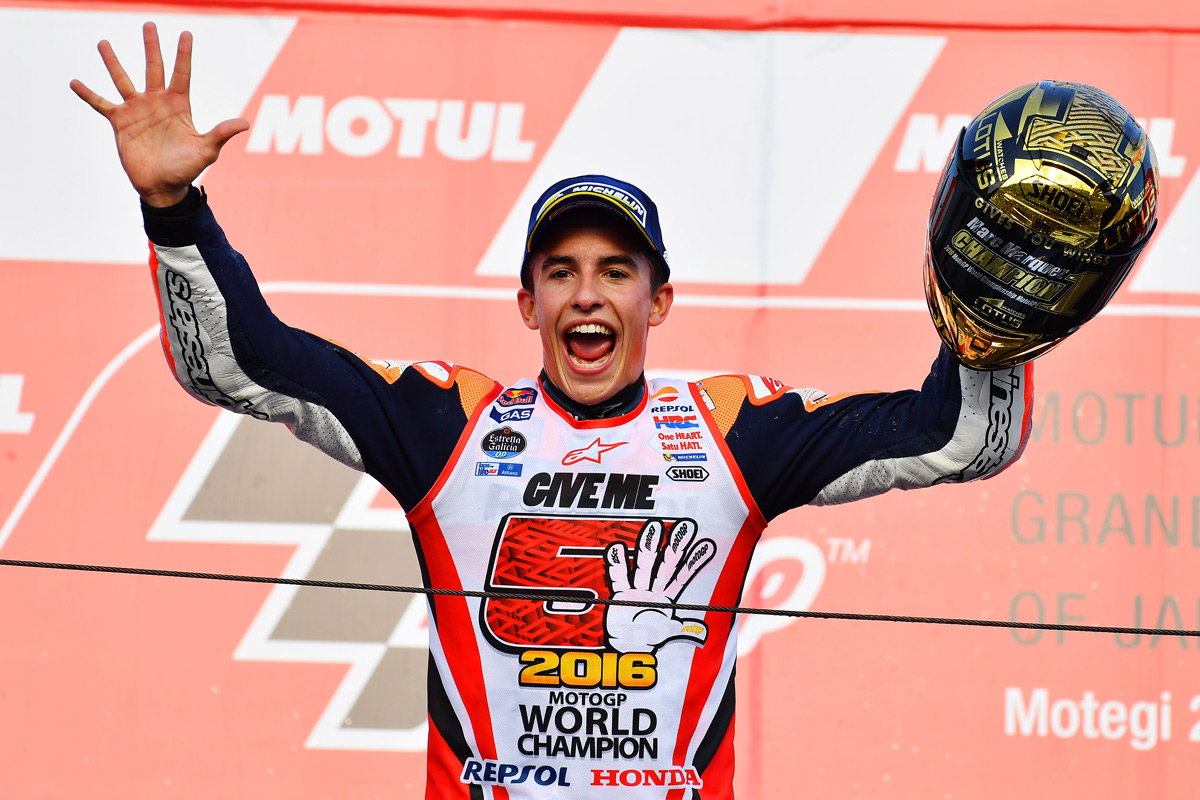 All of racing – if you are anywhere near the front – is a knife edge. And the closer you get to the front, the sharper that knife edge becomes. MotoGP is a razor edge, sharpened to the point where any normal person will bleed if they even dare touch the blade. MotoGP is not a forgiving environment, no matter how easy it looks through the lens of the television cameras. Despite all the smiles, the sponsor meet-and-greets, the armies of PR people marching this way and that, it is a mean, vicious and pitiless sport. Like cage fighting, but at 200 miles an hour.

I am not a great follower of Formula 1 car racing, but I was glad to find out a few weeks ago that Nigel Roebuck, doyen of F1 reporting over the past few decades, is a big fan of MotoGP. It reminds him of how F1 was many years ago: men putting themselves out there in a wild world of risk, walking the line, because that’s what excites them.

“I never miss watching a race,” he told me when we met at a Motor Sport magazine do a few weeks ago.

Inevitably, we soon got to talking about Marc Marquez, both of us shaking our head in wonderment at the stuff the youngster gets away with, especially this season when Honda’s RC213V has been slower than most of the other bikes.

“Marquez really reminds me of Gilles Villeneuve,” said Roebuck, alluding to the swashbuckling F1 hero who won six Grands Prix for Ferrari before losing his life in a practice accident at Zolder in 1982. 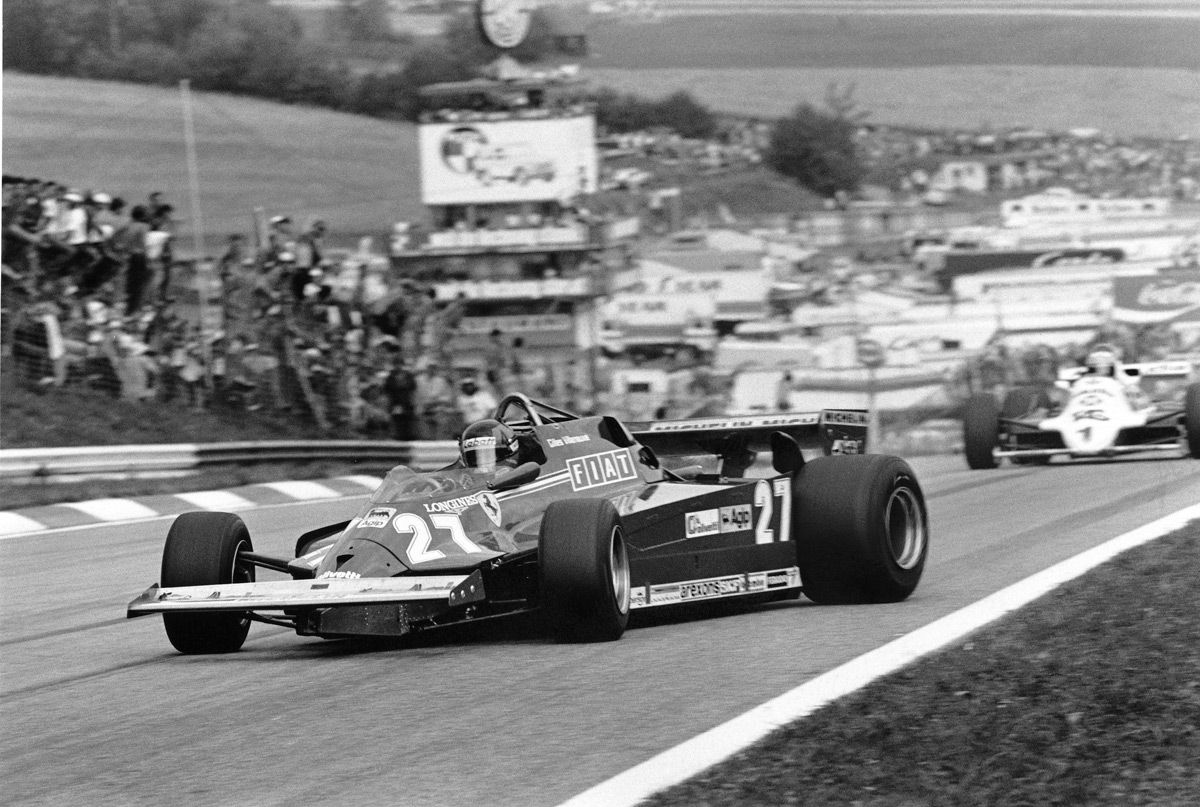 So why Villeneuve? “Because Gilles had that incredible ability to take a car way beyond its limit and still make it work,” added Roebuck. “Marquez looks like that on a bike – he seems to go way beyond the limit and does things no one else can do.”

I never tire of watching Marquez. I’ll even dare to venture that I’d find MotoGP a little boring without him around. I love watching Valentino Rossi, Jorge Lorenzo and Maverick Viñales do their stuff; but there’s nothing like standing at the entry to a slow corner and watching Marquez arrive, back tyre several inches in the air, the rear of the bike sashaying this way and that, the front slick squashed into the asphalt like a marshmallow.

Without some previous knowledge of what happens next, you would expect Marquez to run straight on into the gravel. But no, the rear tyre finally makes contact with the asphalt, kicking the bike out of shape just a few metres before the turn and then he just goes and drops the bike onto its side. Usually the front tyre protests at such treatment, as it takes most of the load of bike and rider in an instant. But no worries, Marquez digs in an elbow to take some weight off the front, wrenches the bike upright and rockets out of the corner.

Next lap, he arrives in exactly the same way. Well, in fact he doesn’t arrive in exactly the same way. Yes, the rear tyre is off the ground again, but this time the bike is pivoting around its steering head in the opposite direction, so the bike is turning left instead of right as the corner approaches. Once again the rear tyre makes contact with the racetrack at the very last moment, the bike trying to point away from the corner instead of towards it. Surely this time he won’t be able to control the situation because the machine attitude is completely different to the previous lap.

But no. Everything is different but the result is the same. He jiggles his body a bit more that way and a little less this way and he drops the bike into the corner and lifts it out of the corner in exactly the same way. Well, in nearly exactly the same way. And this continues lap after lap after lap: different every time, but every time the same. 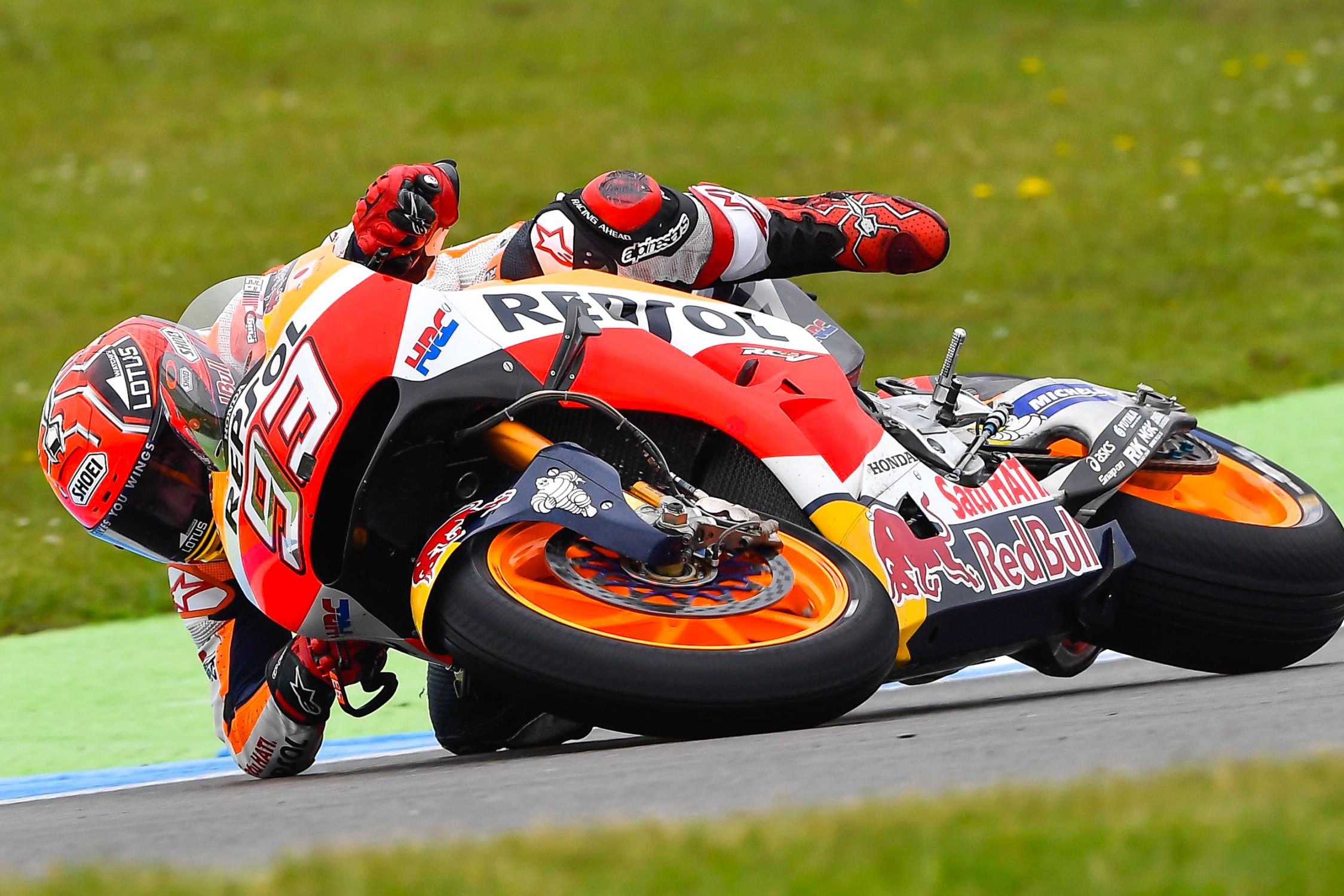 This is extraordinary, but more so than ever this year, when Dorna’s unified Magneti Marelli software has dramatically reduced the electronic controls that adjust engine-braking throughout the deceleration/corner-entry phase. Before 2016, data engineers could adjust all four throttle butterflies individually, programming their openings and closings through each gear change, from sixth down to second. Now they just have basic on/off control of two sets of butterflies covering the four cylinders. So most of the control is now back where it should be: in the hand of the rider.

HRC electronics or Dorna electronics, Marquez always looks out of control. But what does this tell you? That he isn’t out of control; that this is the way he rides, with the bike constantly wriggling beneath him, giving him vital feedback, telling him what it’s doing with each and every movement of the handlebars, the suspension, the tyres. And he has to react to each of these (not always) infinitesimal actions.

It should not be possible. Nobody else rides like this, not even Freddie Spencer or Kevin Schwantz or Casey Stoner; those other arch-exponents of the “make it up as you go along” school of riding, which means letting the bike do what it must do beneath you and then reacting to that. As Stoner once said, “you must subsume yourself to the bike”.

This year the knife edge is sharper than ever, due to Michelin’s front slick. Sunday proved that fact better than any other race this year: both Valentino Rossi and Jorge Lorenzo fell, the first time the Yamaha team-mates have both crashed out.

Both were caught entirely unaware: diving deep into a corner and the front simply washing away, with no warning to allow them to save a crash with their knee or elbow. 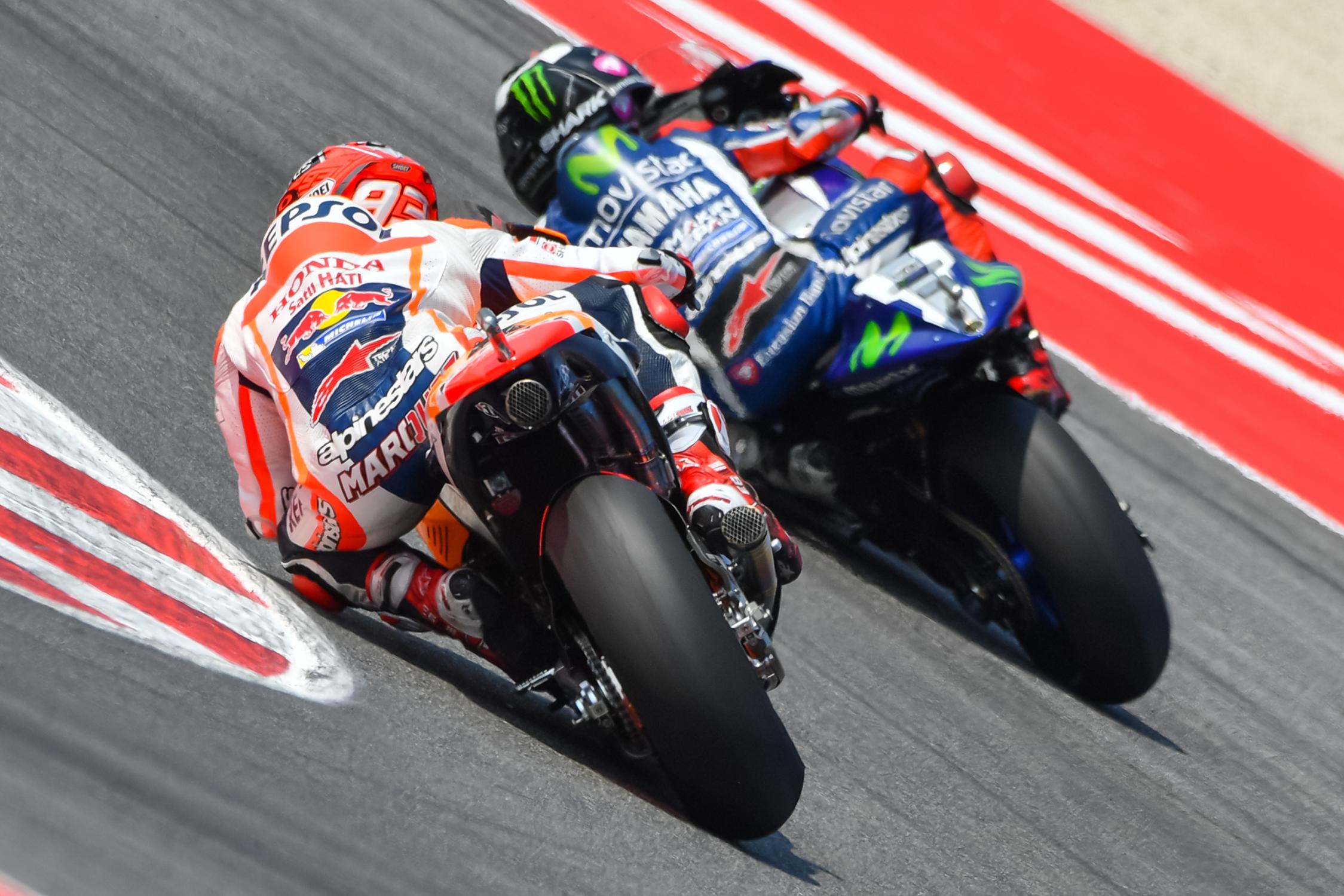 Then again, how many times have we seen Marc do just that this year: the front tyre folds, the bike tips over and somehow he averts disaster, not merely by digging an elbow and knee into the asphalt but also by subtly adjusting his balance on the bike, his load on the footrests and his pressure on the handlebars. At these moments his synapses are on fire, shooting messages across his brain, into his body and down into his limbs. The fact that he rides like this all the time, with the bike teetering on the brink, means that when it does teeter over the limit his brain and his body are entirely ready and able to deal with the consequences.

Of course, his motorcycle helps. The RC213V was conceived to make time into the corners, to find an advantage where no one else can. Nowadays there is little point in building a bike that tries to find its advantage on corner exits, with excellent mechanical grip and spot-on traction control, because all the riders can use that performance to the maximum. On the other hand, very few riders can take full advantage of corner-entry performance, because it requires a deftness of control that only Marquez can use, week in, week out.

Consider Motegi. The Yamaha makes its lap times with superior corner speed, which means the front tyre has to carry a lot of load all the way into the corner, from trail-braking to corner apex to the all-important moment when the rider first eases open the throttle, reducing front-tyre load, and therefore grip.

The Michelin front can do all this: you can use 100 per cent of its grip, but if you use 100.5 per cent you are on your backside, sliding into the gravel trap, wondering what happened, because apparently you did nothing different to what you did the previous lap. Sometimes Rossi and Lorenzo try a harder compound front, as preferred by Marquez, but the way they ride the Yamaha into corners can make the tyre chatter – a high-frequency vibration that reduces grip as surely as grabbing the front brake halfway through a corner.

Both Yamaha riders and Marquez raced exactly the same front tyre: the same medium-compound, the same construction and the same profile. None of them chose the harder tyre. Rossi and Lorenzo knew it caused too much chatter; Marquez felt it didn’t offer him enough warning of an impending crash.

Rossi and Lorenzo fell while fighting to match Marquez’s blazing pace and trying to keep alive their slim title hopes. Rossi went down when he lost grip entering a corner; Lorenzo slid off when he first touched the throttle and lost enough front-tyre contact to lose control. Meanwhile Marquez rode that knife edge and won his fifth race of the year and the world title. Not only that, his 15th points score from 15 races made him the only rider across all three categories to score points each and every time. No one else knows how to walk that line. 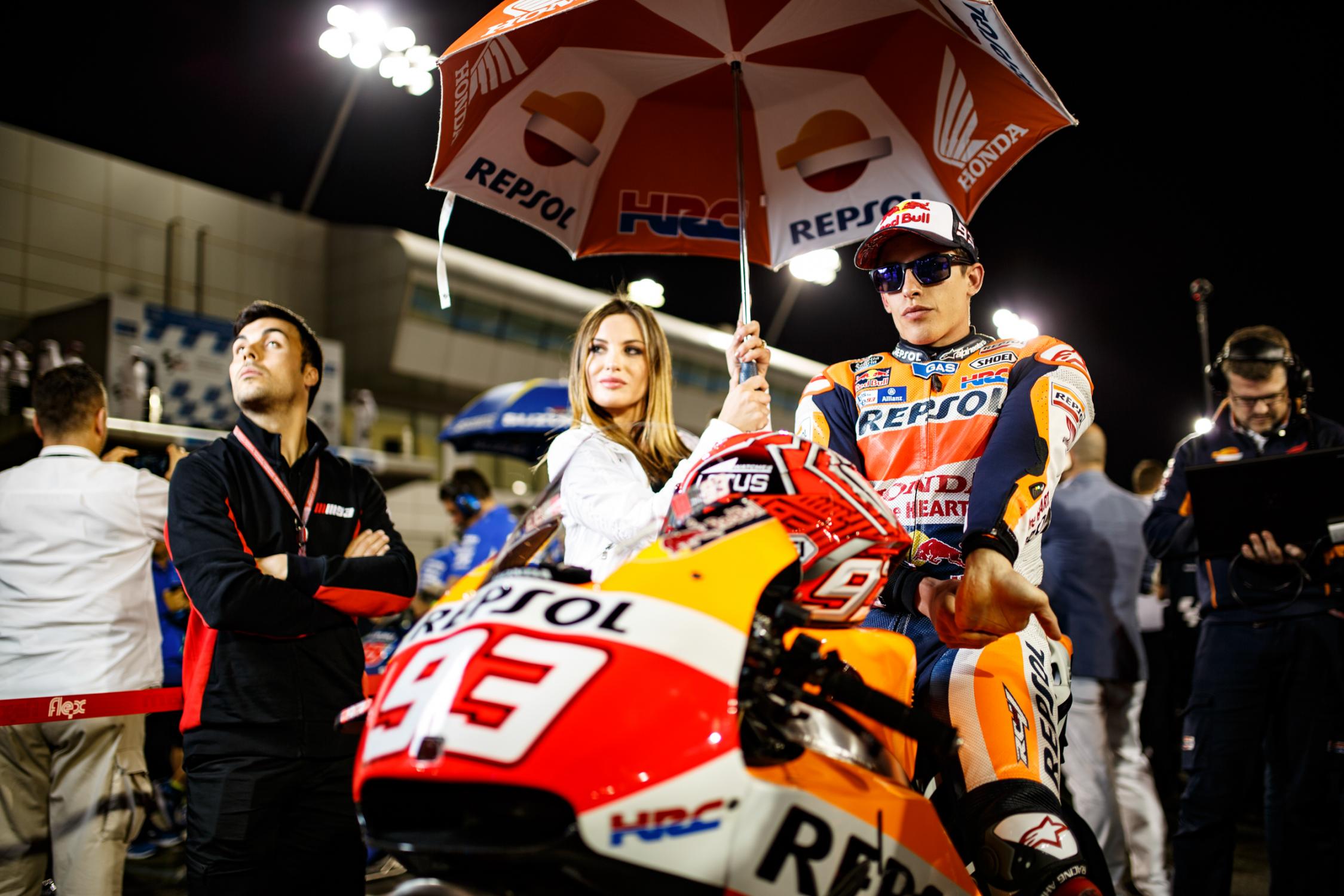