Miguel Oliveira is MotoGP’s star performer of the moment. At the last three races, the 26-year-old Portuguese rider has scored many more points than anyone else with a win at Barcelona and second places at Mugello and Sachsenring. Significantly these three tracks are all quite different, making different demands on rider and machine.

This suggests that the latest incarnation of the RC16 – with a revised frame introduced at Mugello – is a championship contender. And if Oliveira continues to outscore current points leader Fabio Quartararo at the same rate he will challenge the Frenchman for the 2021 MotoGP title.

In fact, Oliveira downplays the significance of KTM’s latest frame update, which features revised stiffness balance for better turning performance. It’s more a case of joining all the dots.

“I don’t know how much the frame is giving us,” he said at Sachsenring last weekend. “I don’t believe it’s giving us everything, but small details count for a lot in this category nowadays and I believe that the rider who understands better how to get the maximum out of each detail is the one who can be faster in the end. So I think I managed to do this a bit better than the rest.”

So what’s special about Oliveira, who is now KTM’s most experienced rider? He can ride a motorcycle, obviously, but so can everyone in MotoGP. What makes the difference at the very, very top is dogged determination, laser-like focus and intelligence.

A certain intelligence has always been required to make it to the top in bike racing, because winning isn’t all about taking risks, it’s about calculating risk and calculating a few dozen other things every single second.

The two most successful riders of the last two decades are Valentino Rossi and Marc Márquez. And it no coincidence that they are the two most intelligent riders I’ve known in four decades of covering this sport. When you talk to them – even in their second or third languages – it’s immediately obvious that their brains fire much faster than most. 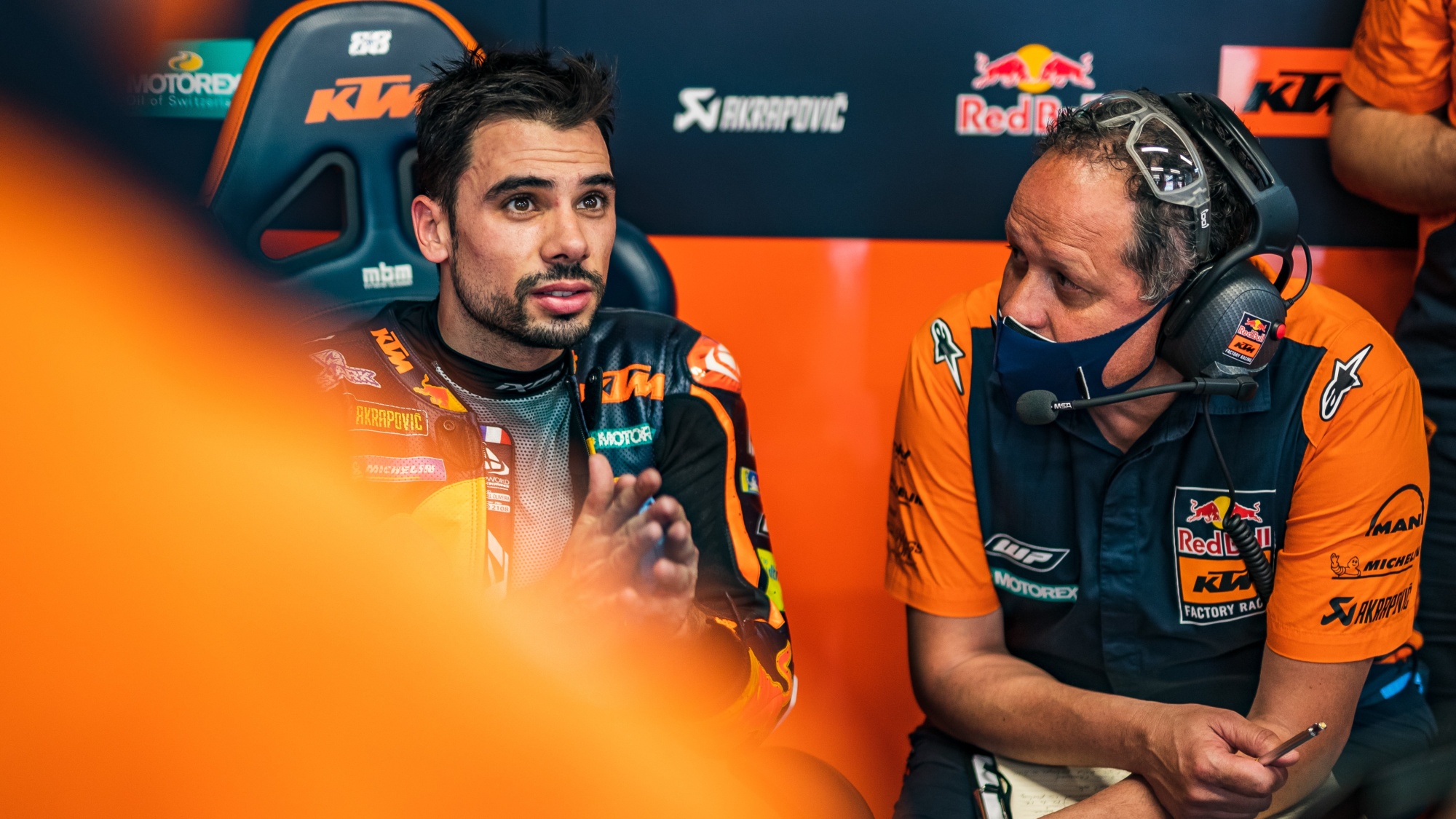 Many years ago I asked Rossi’s renowned crew chief Jeremy Burgess what made his rider so special. “Maybe his reflexes and motor neurons are quicker than the other guys,” he replied.

Oliveira is the same.

“You always hear about the great riders who seem to understand things faster than the others and that’s what I really believe Miguel has,” says his Red Bull KTM crew chief Paul Trevathan. “The thing with Miguel is that he rides the bike relatively easily and he has that leftover capacity to think about things like tyre management, about what should he do now, about where should he put himself. The extra capacity he has in this area is quite impressive and he can really use it.”

This helps Oliveira calculate the immediate future – what effect each motion of riding technique will have during the next few seconds. This is what racing is all about – being slightly ahead of the bike, so that each mental decision and each physical action is made to achieve something not right now but a few milliseconds down the road.

“So he has the ability to understand what’s going to happen if he puts this input into the bike. It’s like when you’re having sex with your wife – you know all the places to touch. This is what the guy has, he really understands the way everything is working, more than most guys.”

That’s why Oliveira looks so in control. When he was chasing down Márquez at Sachsenring on Sunday he barely put a wheel out of line, even though he was sucking every last atom of performance out of his RC16. 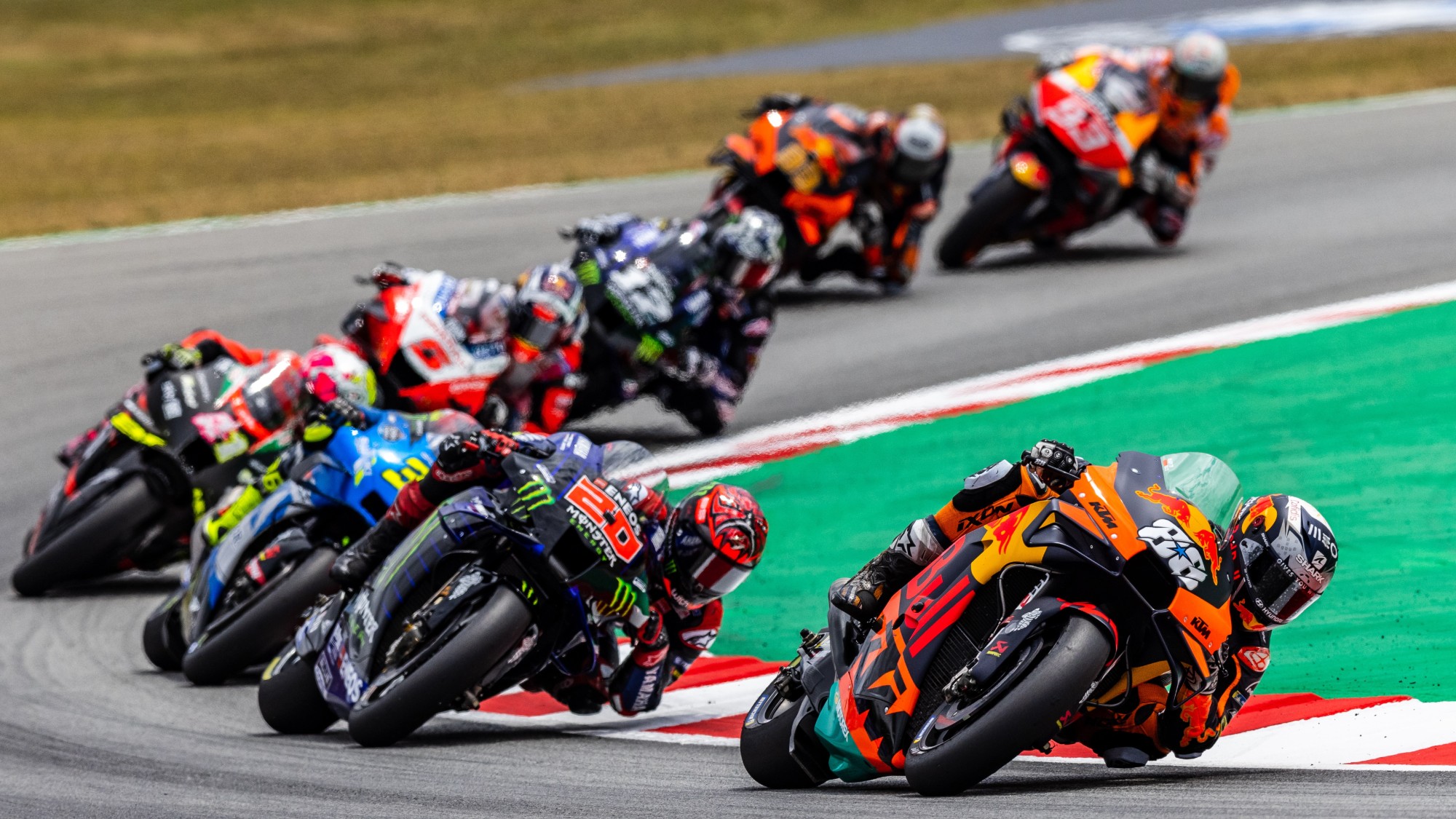 Oliveira leads the charge at Barcelona, on his way to his first victory of 2021

“Miguel is silky smooth – when he was chasing Marc he was chipping away and making no mistakes, then in the last laps he realised that enough was enough,” continues Trevathan. “We’ve never seen a KTM look that good on TV and he’s been on TV a lot at the last three races. He puts it where he wants and the bike looks so stable. That’s not because we’ve reinvented the wheel – it’s purely the rider and his talent.”

KTM had a disastrous start to 2021, caught out by a change in Michelin’s front-tyre design. Oliveira scored just nine points from the first five races, compared to the 65 he’s scored at the last three, since the revised frame (and new fuel) arrived.

“This is the thing about this sport – you have to face these curved balls and I guess it says a lot about a team that can turn things around,” explains Trevathan. “Nothing is easy in MotoGP and nothing is for free. What’s nice about Miguel is how he puts things together, how he asks questions, how he wants to understand what’s going on with the electronics as well as with the chassis. All this gives you that advantage of fine tuning.”

Even during Oliveira’s 2019 rookie MotoGP season his Tech 3 team boss Herve Poncharal was amazed by the clarity of his feedback and his ability to accelerate machine development.

“In the garage he’s so calm you won’t believe it – the guy’s got ice in his veins!” grins Trevathan, who previously worked with Pol Espargaró, after several years as an Öhlins suspension technician, mostly looking after Dani Pedrosa. “How you see him when he’s under pressure on the track is exactly how he is the box. 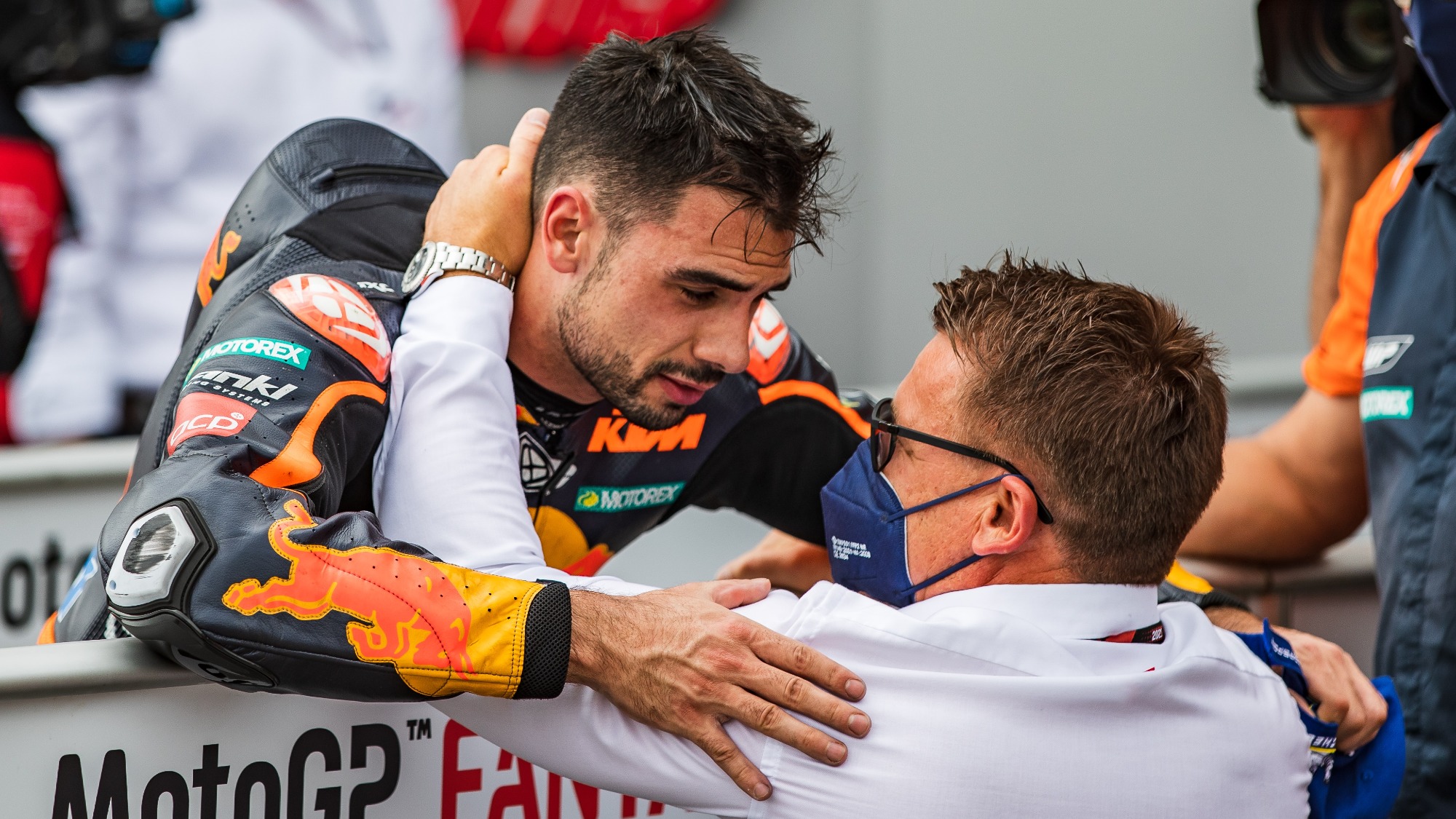 “He’s so focused and so calm and he wants us to really understand what he means. He only says what he wants to say, you can’t deviate and say, yeah, but you said this, so does that really mean this or… And he says, no, what I said is what I mean. He’s so direct and I really appreciate that. He tells me it if it’s good or bad, he tells me what he feels. I don’t need a story about it – at this corner it did this and at the next corner it did that – just tell me what you feel! Miguel is really, really good at this.”

And of course, Oliveira is just getting started. He scored his first two victories last year at Red Bull Ring and at Portimao, but didn’t score another podium all season, so when the bike worked he was fast and when it didn’t he wasn’t. Now he’s a step or three further up the ladder.

“The final step is the rider believing and I see this coming,” adds Trevathan. “He’s going to be a dangerous bugger when he has that. Of course every top athlete has that belief that they can do it, but until you start knocking on the door it doesn’t mean much. Now I see this in his eyes, in his demeanour, in the way he’s walking, in the way he’s talking about the bike and in the way he wants to put things together.

“I’m still waking up from the dream every Monday morning! I knew the guy had something but what he’s proved at three different types of racetrack is that he’s got something impressive and of course he’s helping to drag Brad up there too. I see Miguel getting super-comfortable, super-relaxed and he’s getting stronger and stronger.”

Assen next and then back-to-back races at Red Bull Ring, where the KTM excels and the Yamaha doesn’t…