It’s been strange not writing about Marc Márquez these last few months. Ever since the middle of 2012, when he signed his first MotoGP contract, he’s stolen most of the headlines, certainly most of my headlines, just like Mick Doohan and Valentino Rossi before him.

I have to admit that I was getting jaded with MotoGP before Márquez turned up. The hated 800s – which created follow-my-leader racing so boring that I nearly broke my jaw by yawning – were mostly to blame.

Also, the riders of the time didn’t particularly light my fire. Dani Pedrosa, Jorge Lorenzo and Casey Stoner were geniuses on bikes, but they rarely made my fingers want to dance around the keyboard, although Stoner was great when talking riding technique.

Márquez, on the other hand…

At the next corner he out-brakes four more rivals, which makes 17 overtakes in three corners

I was already dazzled by the kid when he was on his way to winning the 2012 Moto2 world title. Sure, he had his maniac moments but he was more magical than maniacal and, anyway, I enjoy watching maniacs ride motorcycles.

So far the 27-year-old has won 82 GPs, more than anyone apart from Angel Nieto, Valentino Rossi and Giacomo Agostini. But it’s his Houdini moments that stick inside your cranium. He’s got out of jail free so many times I’ve lost count; with one notable exception.

Even now, I occasionally click on YouTube to take another look at the onboard video of his first lap at Motegi 2012, when he failed to engage first gear on the grid.

When the lights go out it’s like he’s engaged reverse – he was so lucky not to get rammed – and by the time he gets to the first corner he’s been overtaken by 26 riders.

At Turn One he passes three on the way in. On the way out he grabs such a big handful of throttle that the rear tyre spins, the bike snaps sideways, the tyre hooks up and he catapults past nine more riders, all of them going as fast as they dare on cool tyres.

One of the nine is Andrea Iannone, who is frantically signalling to Alex De Angelis to “Follow me!”. Márquez passes them like they’re stood still.

He makes up a hundred metres on the next group into the second corner, where he nearly loses the rear again, but takes another victim anyway. At the next corner he out-brakes four more rivals, which makes 17 overtakes in three corners.

He goes on to win the race by four-tenths from Pol Espargaró, his 2021 Repsol Honda team-mate. Just mesmerising. 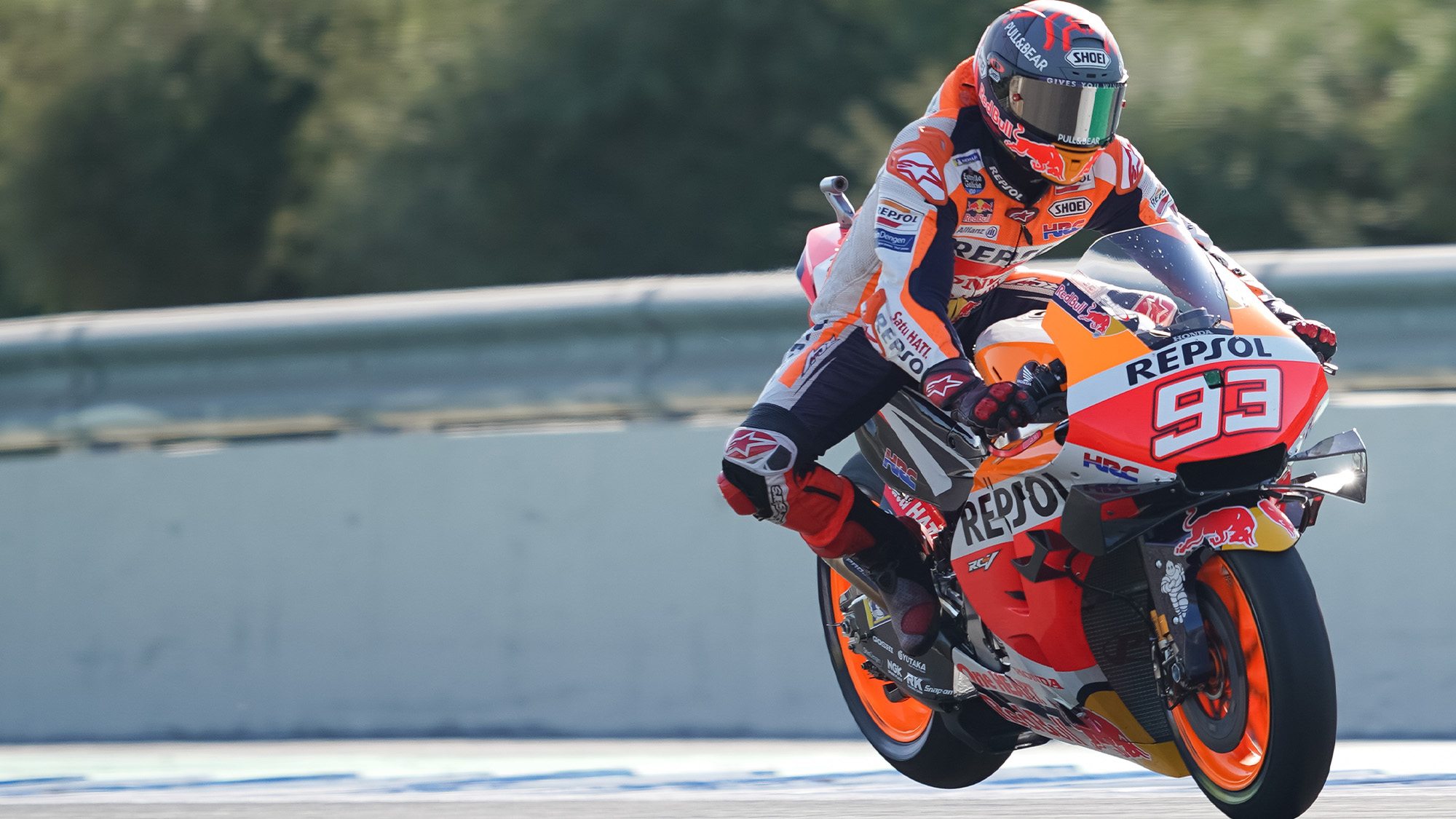 Márquez during his aborted Jerez comeback at the end of July

Márquez’s ability to skate around on the edge of oblivion is what makes him unique. When he came to MotoGP in 2013 he invented a whole new way of riding and the rest are still struggling to catch up. He slides and skids the front tyre like most riders slide and skid the rear.

He can do this because he’s a freak of nature, bursting with supernatural quantities of talent, reactions, strength and bravery.

We all know that sliding the front tyre without ending up picking gravel out of your backside isn’t an easy trick to pull off, especially when the tyre is cold.

There are few things nastier in motorcycle racing than a cold front tyre – just ask the 38 Moto2 and MotoGP riders that crashed at left-handers at chilly Barcelona last week, because the left side of their front tyres wasn’t hot enough. (The total of Moto2/MotoGP crashes all weekend was 42!)

When your front tyre is cold you will crash if you push too hard, but the only way to make the tyre hot enough to grip is by pushing hard. See the problem? 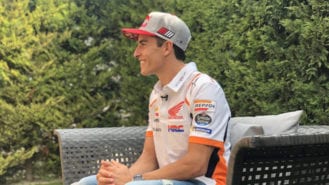 It’s the sharpest knife edge of them all, and Márquez is never better than when he’s riding that knife edge. That’s why he’s so good in iffy, damp conditions, when the line between glory and gravel trap is at its narrowest.

Even then he goes all-in, which is why when he’s on the track you never quite know what’s going to happen next. In this respect he reminds me of Kevin Schwantz.

There are so many Márquez moments. There’s the standard front-end tuck, when he uses that edge-of-the-cliff moment to help turn his Honda. There are the innumerable front-end saves, when we laugh at the television, like we laugh when a magician pulls off a particularly mind-boggling trick.

And then there are those solid-gold moments that leave us sat on the sofa wide-eyed and open-mouthed: how the hell did he get away with that?!

There was his COTA pole position in 2015, when his bike stopped on the start/finish with three minutes of qualifying remaining. He parked the bike against the pit wall, sprinted down pit lane and jumped on his spare RC213V. 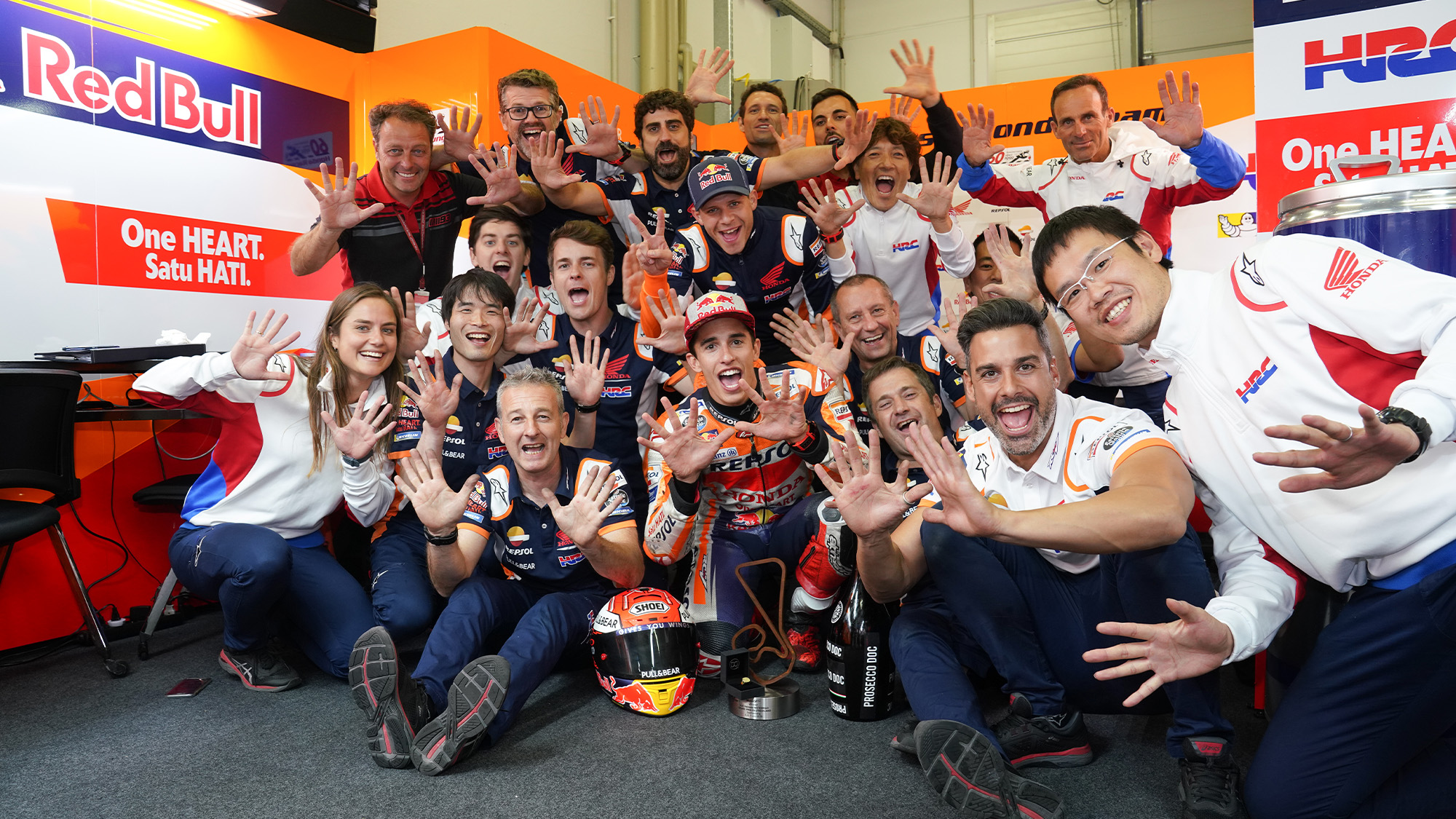 Márquez keeps a tight team around him

He completed his out-lap with seconds to spare, leaving him one lap only to elevate himself from the third row of the grid. He had the rear in the air into pretty much every corner and was out of the seat several times, but he took pole anyway.

Then there was last year’s Brno GP, when he took pole by 2.5 seconds in pouring rain, using slicks! Once again, his rivals were slack-jawed in disbelief.

“I don’t understand how the track was dry for Marc, but not for the rest of us,” deadpanned Danilo Petrucci, speaking for most of the grid.

My own favourite is Sachsenring 2016, because it highlights his ability to do things with a cold front tyre that no else can.

The race starts on a cold, soaking track, Márquez not fully at ease and struggling to stay with the leaders. At one-third distance he runs off the track at high speed, rear-wheel steering his way out of the gravel trap. He’s now down to ninth and not making much headway, so he rolls the dice.

When you crash at high speed you are in the lap of the gods. Sometimes you get hurt, other times you don’t

The track is still mostly cold and damp but he charges into the pits and swaps to his slick-equipped second bike.

Pol Espargaró follows him into the pits – no doubt trusting in his countryman’s ability to make the right call at the right time – and follows him out.

What Espargaró does next only serves to shine a light on Márquez’s magic. He crashes at the very first left-hander. The track is that treacherous.

Márquez continues to ride the same razor’s edge Espargaró had been riding, pushing the front tyre enough hard to generate heat but not so hard to have it skipping across the asphalt and into the gravel.

He is now 14th, 38 seconds behind race-leader Andrea Dovizioso, but within a lap or two he is the fastest man out there, laying fat black lines with his rear tyre, even though the dry line isn’t a metre wide in places.

You can’t help thinking that if anyone else had tried this they’d be on their arse.

He takes the lead from Jack Miller – still on rain tyres – and crosses the line ten seconds ahead of runner-up Cal Crutchlow.

To me, that victory sums up Márquez better than any of his other 55 MotoGP wins. (That’s an average of eight per season in bike racing’s most competitive era.) 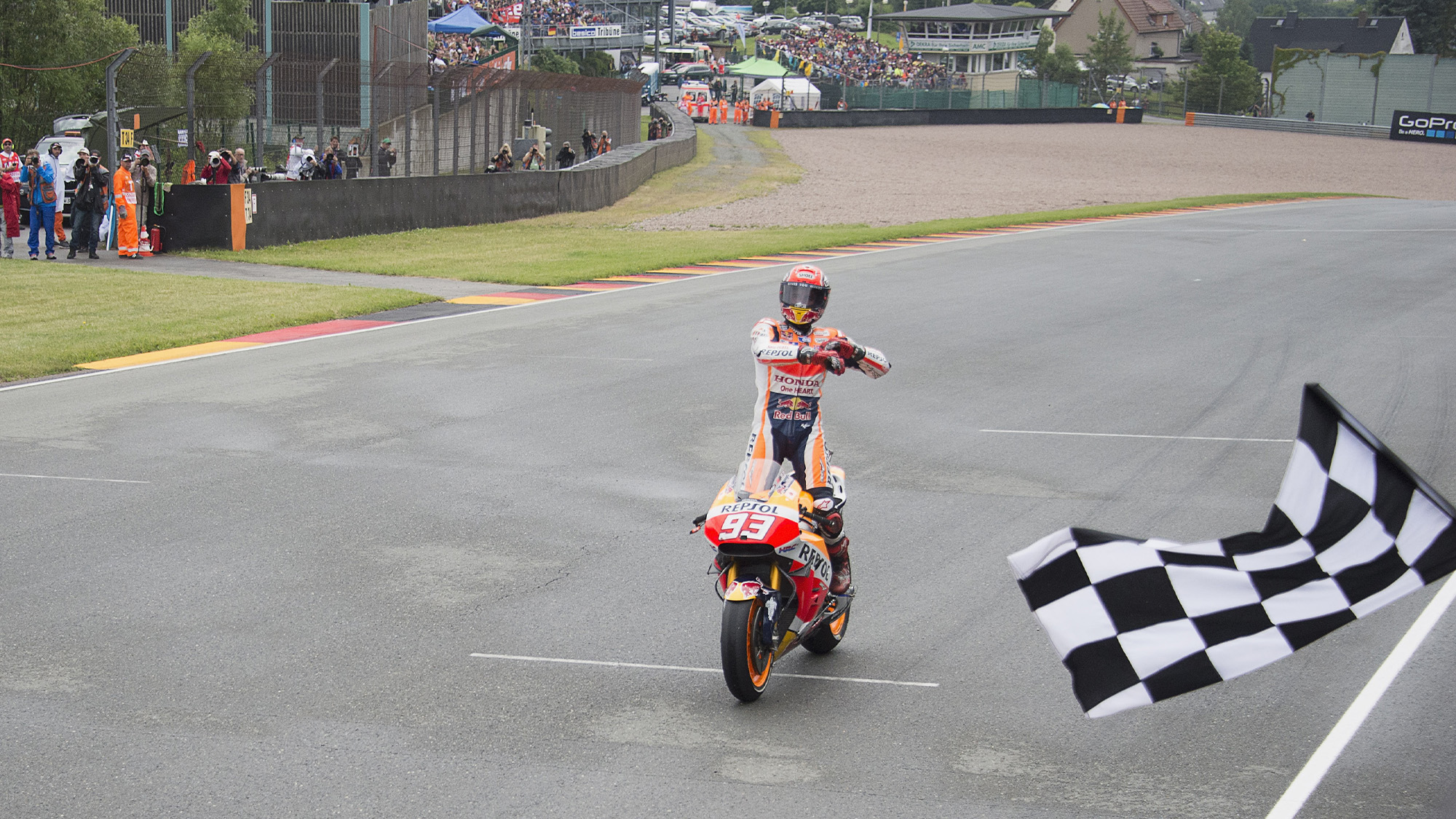 Slick riding at the Sachsenring: Márquez celebrates victory in ’16

Of course, at Jerez in July he overstepped the limit and paid the price. Was that arm injury inevitable because of his over-the-edge style of riding?

Only so far as crashing is inevitable if you race bikes at a high level. The fact is that Márquez doesn’t crash more than anyone else. Only once during his decade in GPs has he topped the crasher’s league in any class.

When you crash at high speed you are in the lap of the gods. Sometimes you get hurt, other times you don’t. Consider the case of Schwantz and Wayne Rainey – Schwantz hit the ground twice as often, but it was Rainey that ended up in a wheelchair.

When will Márquez return from injury? I’ve no more idea than any other journalist.

Did he try to come back too soon when he attempted to race the weekend after his accident? Yes, but this is what racers do.

Instead they saw a man prepared to go way beyond what they, you or I would be prepared to do to achieve a goal. Few world champions achieve what they achieve without pushing themselves to borderline insane extremes. Rightly or wrongly, it’s what racers do.