The stupidest journalist questions can sometimes elicit the best answers. I discovered this some time ago, on the eve of the 1991 French Grand Prix, when Wayne Rainey had qualified on pole position.

“Wayne, do you have any secret overtaking points planned that you can tell us about?” I asked.

On Saturday evening at Aragon I asked front-row starter Franco Morbidelli a similarly ill-thought question. I wondered whether Morbidelli and fellow front-row starter Álex Rins considered themselves out of the title fight and, if they did, would they help their team-mates, Fabio Quartararo and Joan Mir?

“Why are we not in the battle for the championship?” replied Morbidelli. “I’m asking you. You tell me.”

“Er, well,” I said. “I’m just looking at the numbers and you’re not fully out of it, but you’ve answered my question – you’re not going to help.”

“It really was a trip, I felt great. It wasn’t a journey it was a trip”

Rins next. “I think Franco said it clearly. We still have the opportunity to win the championship. I don’t know about Franco but I’m 36 points behind Mir and that’s all. For sure, if I need to help Joan I will finish first to take the 25 points. But I think as Franco said, the championship is still open.”

Morbidelli’s faultless ride the following day was the best answer to an ill-judged journalist’s question. He rode a perfect race to put himself into the title hunt, now fourth overall, ahead of the daunted Andrea Dovizioso and 25 points behind leader Joan Mir, with 75 points up for grabs. Meanwhile Rins is sixth, four points behind Dovizioso and 32 points down on his team-mate.

The title is a long shot for Morbidelli, but at the absolute heart of every serious motorcycle racer is a burning optimism that believes anything is possible, even to the point of self-delusion, because the alternative is basically to give up and go home.

Morbidelli (“A lot of people say I look like Jimi Hendrix”) described his victory like a hippy might describe a good night out. “It really was a trip,” he grinned. “Meaning, how can I say…”

“Yes, I felt great. It wasn’t a journey it was a trip,” he answered.

Morbidelli was out front from the moment pole-sitter Takaaki Nakagami threw it away five corners into the race. After that he was all alone with just the empty road for company, just the way Yamaha’s YZR-M1 likes it.

The clear road gave him the chance to go deep into that subconscious state that all racers strive to enter when they race.

Psychologists call this ‘flow’ or ‘being in the zone’. Some racers liken it to meditation or moving into a fourth dimension, where despite the world rushing past at 200mph, you feel a Zen-like inner peace. And when the bike slides it feels like you’ve saved the slide even before it started.

This is the zone riders try to enter when they’re sat on the grid, with shades and headphones on, visualising the first laps and trying to drift into their subconscious. Which is why they HATE being asked questions by TV people.

“Riding fast is a subconscious thing,” five-times 500cc world champion Mick Doohan told me years back. “You go quickest, you’re most in control and you’re least likely to make mistakes when you don’t have to think about anything.” 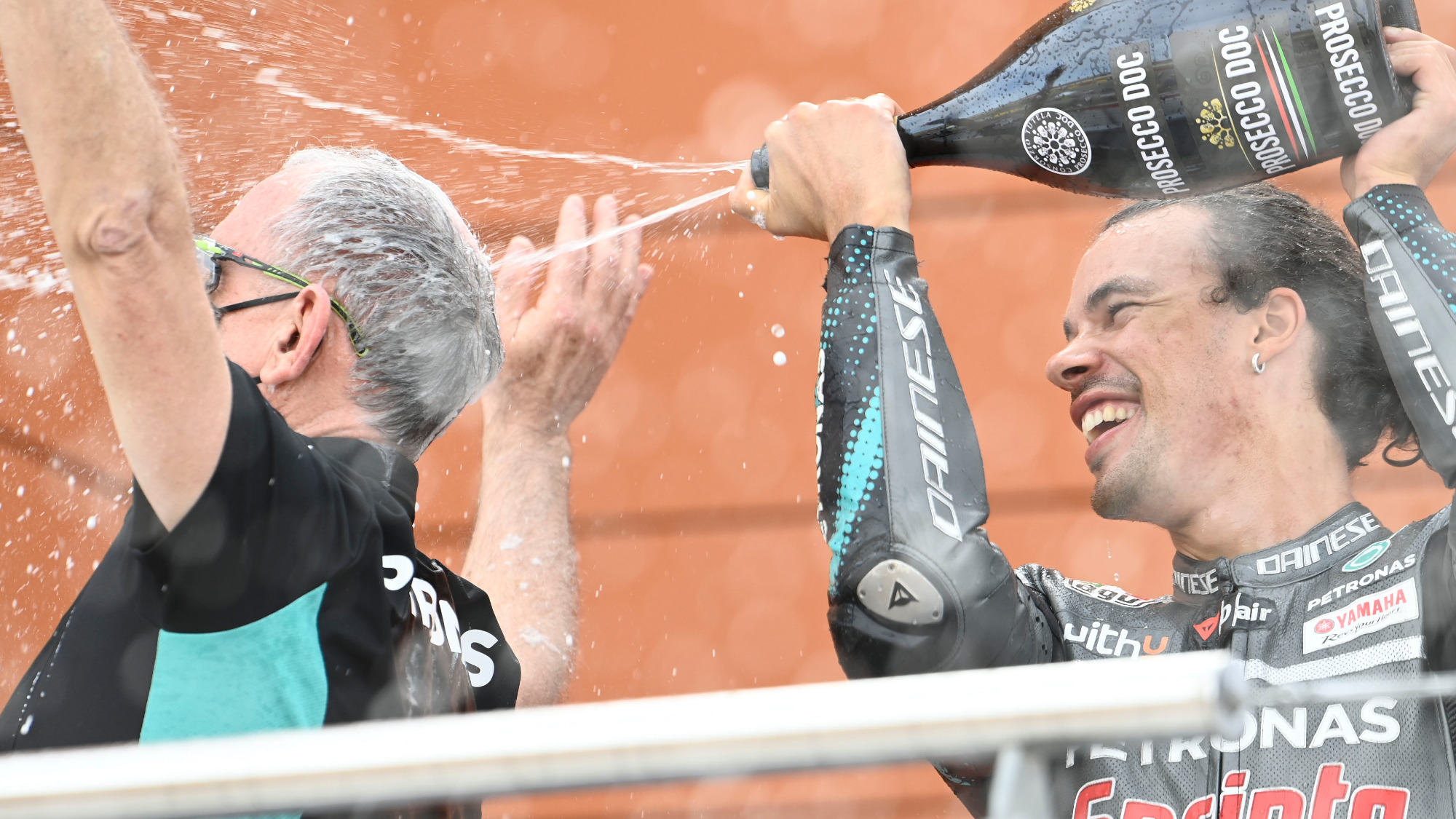 This was where Morbidelli found himself on Sunday.

“The concentration was very, very high – the riding feeling was amazing – 23 laps went like this,” he said, clicking his fingers. “I had so much fun. Now we’re on [for the title]!”

Another secret to Morbidelli’s second win was his decision to race Öhlins’ new BDB50 shock for the first time. For the second consecutive race, the BDB50 locked out the podium.

The increased calmness comes from the shock’s hi-tech valving system that reduces rearward weight transfer when the rider opens the throttle exiting corners.

This is a big deal, because in this year of mega Michelin rear grip and not-so-mega front grip we have all seen onboard footage of riders losing the front a millisecond after they open the throttle. This happens because the load shifts rearward when the rider puts the power into the rear tyre, which reduces front tyre contact patch and therefore front grip.

In this situation the bike runs wide exiting the turn, forcing the rider to get off the throttle, costing vital fractions of a second. At worst it puts the rider on his backside in the gravel.

Sunday’s race winner praised his crew for adjusting his bike to suit the shock so quickly. His crew chief is Ramon Forcada, who has been fettling M1s since 2008, first with Jorge Lorenzo, then with Maverick Viñales. Two years ago Forcada – some call him the Spanish Jeremy Burgess – was sacked by Viñales, who seemed to blame him for his inconsistency.

Morbidelli and Forcada didn’t set the world alight like Petronas team-mate Quartararo last year, but they have forged a very close and respectful relationship which is now bearing fruit.

“With Ramon we are able to make the right steps at the right times,” says Morbidelli.

Morbidelli’s Aragon win was his third visit to the podium in the last nine races, while the two riders immediately ahead of him in the championship – Quartararo and Viñales –have each managed just one podium finish during that time. 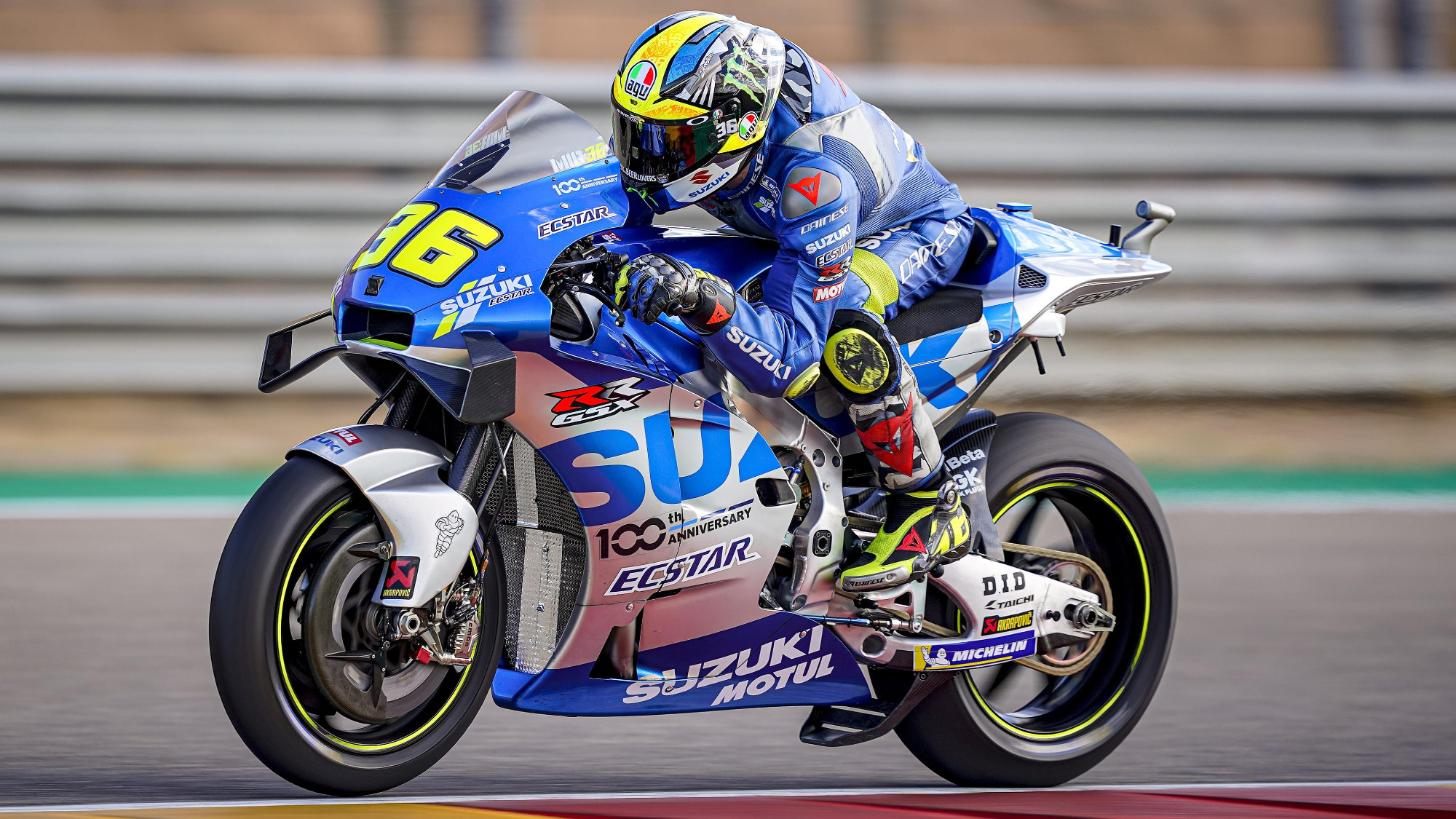 Mir’s consistency is much, much better than any of his rivals

Quartararo and Viñales have 2020 Yamahas, while Morbidelli has updated 2019 bikes. The latest M1 definitely seems fickler than its predecessor. Perhaps the bike’s ultimate performance level is higher, but getting it inside the Michelin window, with the company’s complex 2020 rear slick and the messed-up Covid-19 season, isn’t easy.

By the way – and it’s almost certainly only coincidence – each of the manufacturers that puts 2019 and 2020 bikes on the grid saw their second-hand bikes perform best: Morbidelli, fifth-placed Johann Zarco on his Ducati GP19 and pole-sitter Nakagami’s 2019 Honda RC213V.

Viñales and Quartararo took the chequered flag together on Sunday, in seventh and eighth, 14sec behind Morbidelli, both of them confused and frustrated.

“In the race after three laps I lost completely everything,” said Viñales. “I had no more grip in the bike and a lot of chatter. The problem was the tyres or the setting or whatever. The 2020 bike is what we have – we need to face it. For sure it’s not the best bike we can have, but we will see in Valencia: fresh mind, trying to push, then we will see. If it’s not good, then we have to change something big.”

Quartararo had similar problems. “In warm-up we found something positive but in the race I lost everything,” he said. “From the first lap I had no feeling, no grip, no traction. I’m happy to leave Aragon because for two weeks here we struggled every day. I’m sure Valencia will be better for us, because there’s less tyre consumption there, so I think we will be fast and consistent, not like here. And I think we can take that feeling to Portimao, because Portimao was my favourite track.”

Quartararo and Viñales know they also need to work on their riding technique, because they’re slightly more aggressive on the bike than Morbidelli. Smoothing out their brake and throttle use might help them get more out of the Michelins, which work best when treated gently.

But what can the three Yamaha riders in second, third and fourth in the championship do about the rider ahead of them?

It isn’t so much the speed of Mir’s Suzuki, but the fact that the GSX-RR is the only bike on the grid that can squeeze inside the Michelin window, week in, week out. Viñales again: “At the moment the Suzuki is on another level, we can’t do anything”.

Mir may not have won a race yet but he’s finished on the podium at six of the last eight races. In this weirdest of weird seasons no one else has scored more than three podiums.

Mir knows that his rivals are all over the shop, so he needs to focus on not making any mistakes at the Valencia double-header and at the season finale at Portimao.

“We all know we can make mistakes,” he said after Sunday’s race, which started with an aggressive, risky charge from 12th on the grid to fifth place by the end of the first lap. “We have to be fast and always when you try to be fast you take risks and you can make a mistake. The important thing is to find the balance, to risk at the right moment.”

Once Mir had taken third place from Zarco he thought he had the speed to beat Rins and Morbidelli, until he lost some rear grip.

In theory, Valencia and Portimao are both flowing circuits that should suit the Yamaha and the Suzuki. And Morbidelli achieved his first international victory at Portimao, when he won the 600 European Superstock race at the rollercoaster track in June 2013.