Motorcycle grand prix racing isn’t supposed to be deadly, even though by fate it sometimes must be.

Shortly before the start of yesterday’s MotoGP race – two hours after another terrifying Moto3 pile-up – I got a big chill down the spine, the sort of thing I only usually get before watching an Isle of Man TT, where the possibility of death is ever present. That suggests something is wrong in MotoGP, specifically the state of the Moto3 class.

So far this year the Moto3 world and junior world championships have claimed two lives. Yesterday the category came too close to claiming more.

The Grand Prix of the Americas Moto3 race was red-flagged after seven laps following Filip Salač’s crash exiting the Turn 11 hairpin. The race was restarted over five laps, a decision that nine-time world champion Valentino Rossi suggested was like asking the riders to play Russian roulette.

“I was very, very scared for everybody – they are very lucky nothing happened. The stewards have to do something serious for these young guys”

On lap three of the restart the pack was heading down COTA’s long back straight when the usual slipstreaming manoeuvres began. Slipstreaming is everything in Moto3 because it’s speed for free in a class which makes finding the difference anywhere else very difficult, so riders will do anything to chase the vacuum behind the bike immediately in front and to stop someone behind jumping into their vacuum.

Deniz Öncü drafted past Jeremy Alcoba at around 140mph, then pulled across in front of his rival. As he did so his rear wheel tagged Alcoba’s front, sending Alcoba flying.

Andrea Migno and Pedro Acosta, following close behind, hit the Spaniard’s fallen machine, sending them both into orbit. The trio’s survival – not even a single broken bone – was a huge testament to the latest motorcycle riding gear and perhaps also to the width of the straight.

“They’re lucky it happened here – you could land a Boeing 747 on the straight, it’s that wide,” commented Jack Miller later, while berating “the idiots” in Moto3.

Öncü was later given a two-race ban by the FIM stewards, for “swerving into the line of another rider”. 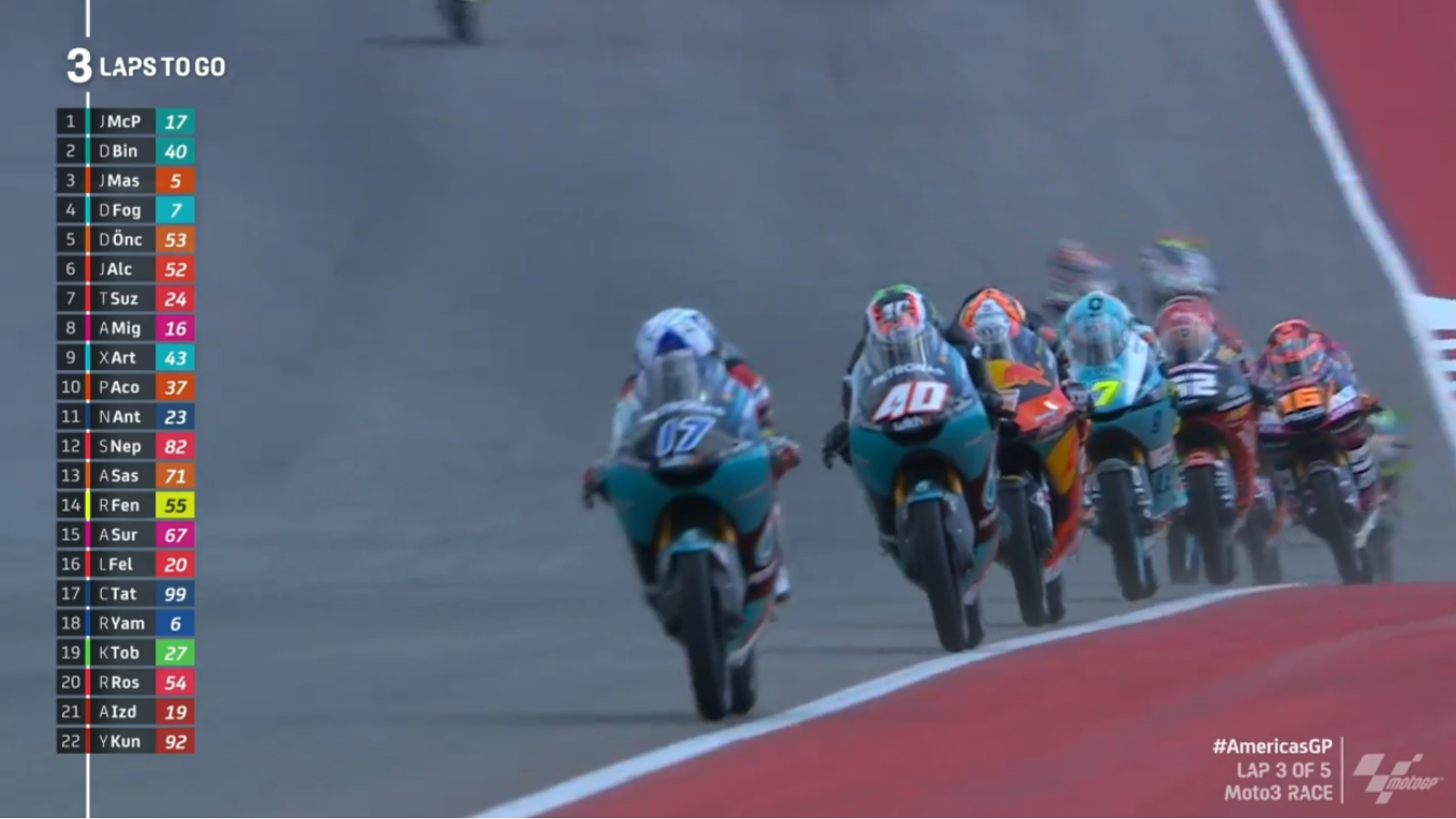 And yet Öncü’s move was nothing unusual in Moto3. It was nothing compared to the swerving that’s been taking place all season, especially at Losail and Catalunya, and for the last few years as Moto3 riding increases in intensity.

Öncü didn’t swerve aggressively, but he did perhaps pull across in front of Alcoba more swiftly than he needed to.

He certainly wasn’t unleashing what’s known in the trade as the “front-wheel chop”. This is an age-old manoeuvre during which the perpetrator tries to clout his rival’s front wheel with his rear wheel as he drafts past; not so much to make the other rider crash (although too bad if he does) but to cause him to roll the throttle for an instant as he controls the ensuing front-wheel wobble or just to scare him enough to think very carefully about counter-attacking. Intimidation has always been an important weapon in motorcycle racing.

So, if Öncü’s move wasn’t super-aggressive were the FIM stewards correct to give the 18-year-old Turkish rider a two-race ban, two weeks after he was allowed to race at Misano the day after being knocked out cold for at least ten minutes?

The sanction was harsh but necessary because the stewards and Dorna have lost control of Moto3 and need to reassert their authority swiftly and decisively.

Therefore Öncü was not so much punished for his deed but “pour encourager les autres”, to encourage the others to ride more safely.

(This French phrase comes from the 18th century, when British Admiral John Byng was executed for failing to break a French siege of the island of Menorca, then in British hands. Byng’s execution features in Voltaire’s play Candide. “In this country it is found good, from time to time, to kill one admiral to encourage the others,” a British officer tells Candide.)

Öncü’s two-race ban was much less unfair than Byng’s execution, but it signals a better-late-than-never change of attitude from the FIM stewards. Race bans will hopefully encourage Moto3 riders to think more carefully about what they’re doing. Grid penalties and long-lap penalties have proved entirely ineffective, because riders can still win races under these sanctions. 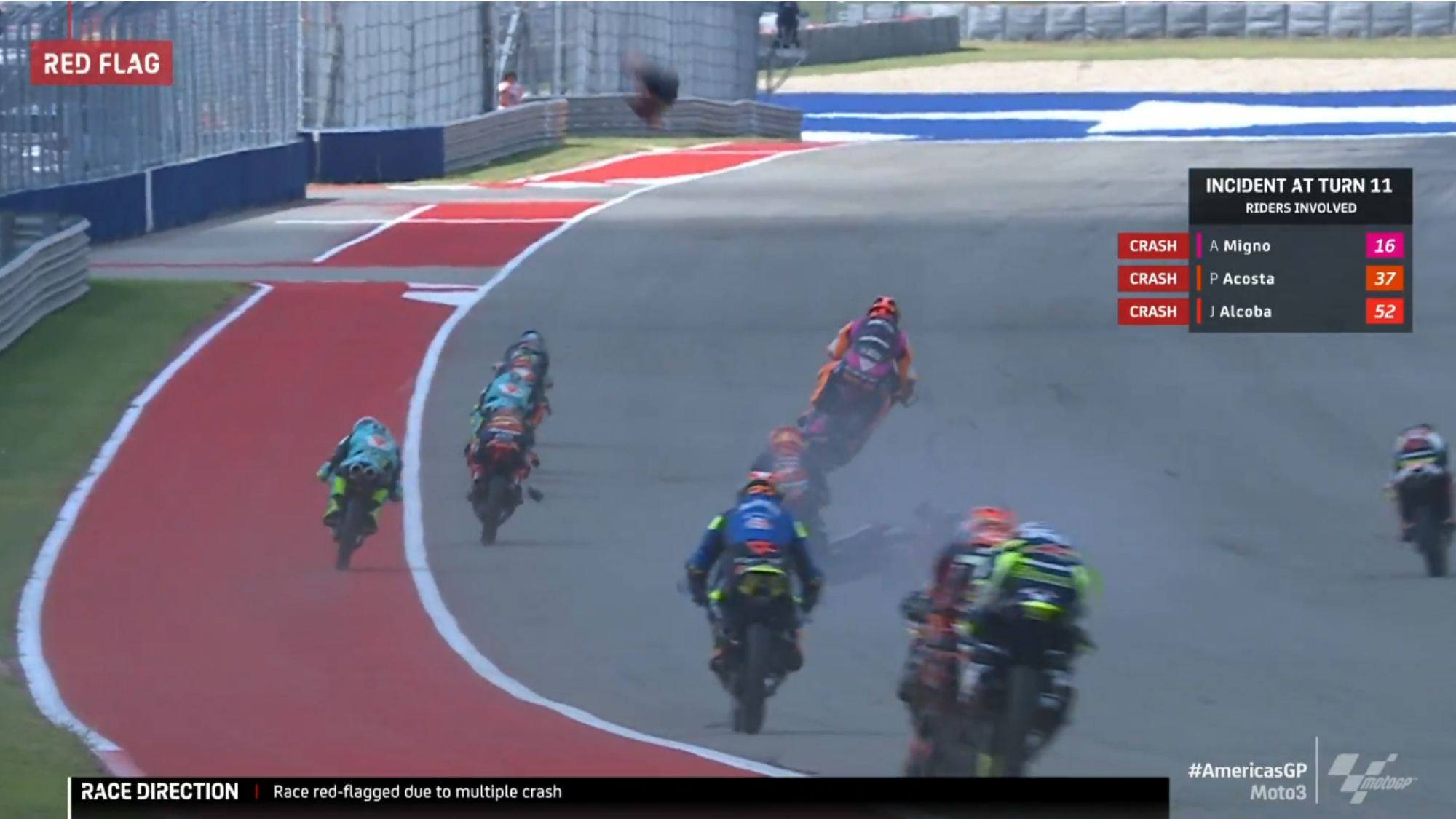 “For me the penalty is right because they [the FIM stewards] have to do something, because the situation is completely out of control,” said Rossi, who won the 125cc world championship, the forerunner of Moto3, in 1997. “Öncü moved on the straight when he knew he had another rider to his side and caused a crash that was potentially a mortal crash.

“I was very, very scared for everybody – they are very lucky nothing happened. The stewards have to do something serious for these young guys – they have to stay at home and not race.

“Motorcycle racing is too dangerous to have this behaviour on the track. You need to respect your safety and the safety of your rivals. This is the most important thing – more important than gaining one position – because you are playing with the lives of other young guys.”

“Deniz didn’t do that on purpose and he’s not the only one that does this manoeuvre,” said Mir. “I think the penalty is not only for his manoeuvre, it’s more to stop the others doing this. It’s a model punishment, so I agree with it.

“We cannot have these manoeuvres anymore. We’ve lost a lot of kids this year and today we almost lost another one. So we have to take some good decisions because in these small categories the bikes are so easy and the groups are so big that it’s becoming so, so, so dangerous.

“I wasn’t happy before my race – it’s not easy for the riders to see such a crash. I don’t know what the correct measures will be, but we need them soon because if not something bad will happen again.” 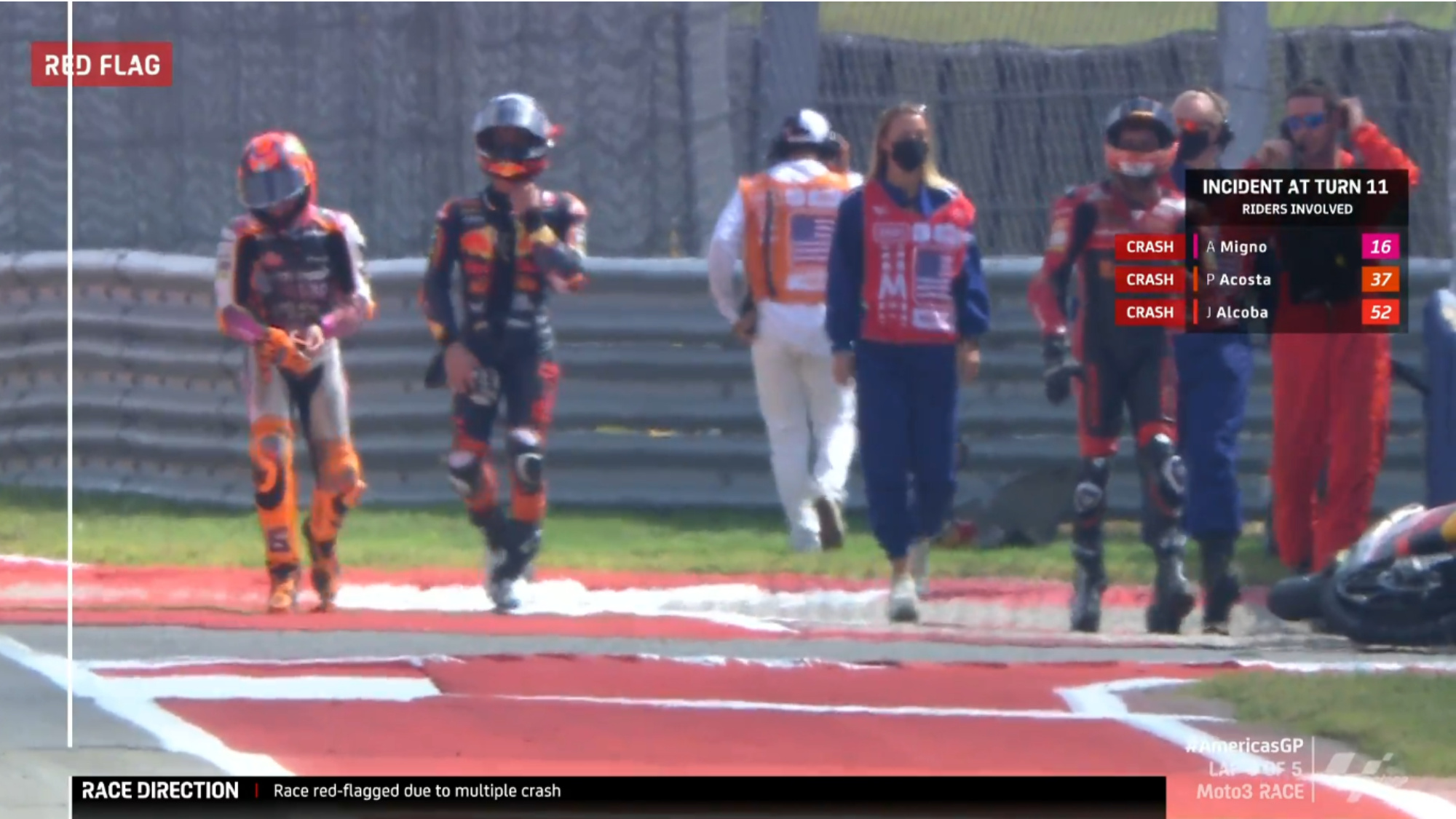 Migno, Acosta and Alcoba walk away from the crash, essentially unharmed

Although the FIM stewards have now made their attitude clear on straight-line behaviour it’s important to remember that this year’s two Moto3 fatalities didn’t happen on straights. They both happened when riders fell while cornering and were hit by riders following very close behind, an entirely normal situation in Moto3 that still needs to be addressed.

Even before practice began at COTA riders were talking about the dangers of racing, particularly in the smaller classes – Moto3 and World Supersport 300 – which claimed the life of 15-year-old Dean Berta Viñales the previous weekend at Jerez.

“At the end of the day this sport is hard, it’s brutal,” said Miller, discussing Viñales’ death. “One of the beauties of the sport is that it’s so raw, and it’s dangerous, so those things can happen.

“I personally haven’t been involved in anything like that. Thank God, I’ve been very lucky. But I’ve seen it plenty of times. I remember being 16 when we lost Marco [Simoncelli, during the 2011 Malaysian MotoGP race], and that was my fifth grand prix. It was tragic. Also the way things went down that day, it sits in your mind. I still have scenes of it in my mind, with the crowd going nuts, throwing bottles at the mechanics who were in pit lane trying to pack up the pit-wall shelters [after the race was cancelled].

“There has to be a big step taken in looking at the safety, at the way these races go. This year’s been especially bad. We can’t have three young kids in the space of not even nine months losing their lives. It’s atrocious. And I think I speak on behalf of everybody when I say I’m getting sick and tired of going to these minutes of silence for kids that were so, so young. It’s just so bad. That can’t continue. It can’t, no way. Something needs to be done.”

No wonder that some paddock people thought it inappropriate that Dorna broadcast a short documentary about its British Talent Cup series – which has children from 12-years-old riding 130mph Moto3 bikes at BSB rounds – in the run-up to yesterday’s Moto3 race.