Once again, MotoGP’s accident figures broke all records. But does that mean the racing is getting safer or more dangerous? 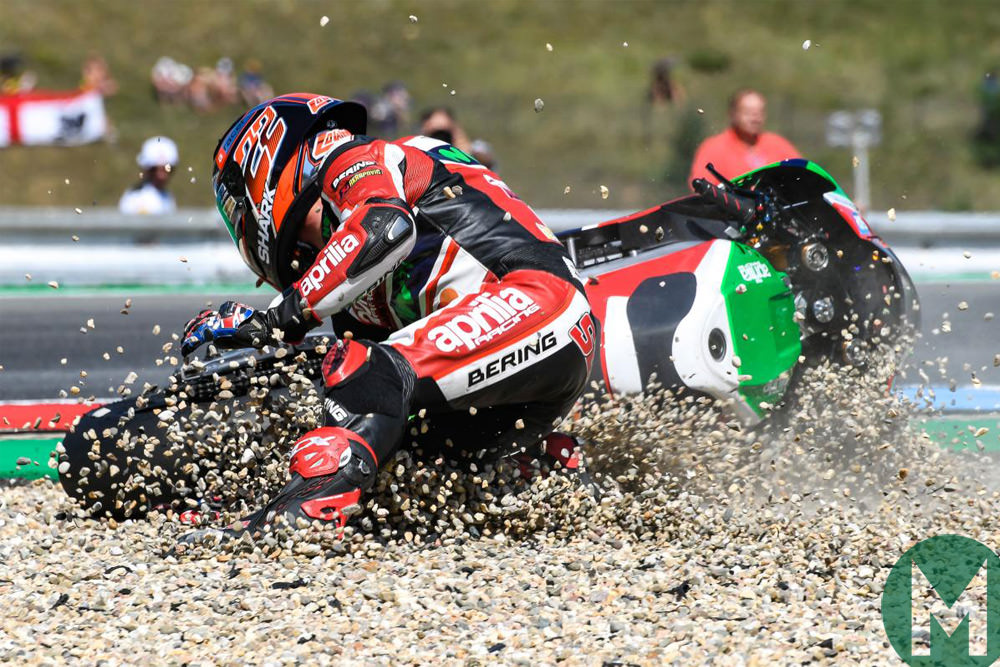 Late November is a guilt-ridden time of year to be a MotoGP journalist. While dozens of riders check themselves in for post-season surgery, like a reckless driver booking his car’s annual bodyshop makeover, we sit comfortably at our desks analysing MotoGP’s annual Falls Report.

This year’s report runs to 159 pages and contains almost as much pain and anguish as a war novel. Every single crash is recorded in detail: where, when and what were the injuries? And then Dorna’s Friné Velilla divides the accidents into numerous bar graphs, by class, by race track, by year and so on.

The Falls Report isn’t just a ghoul’s delight. There is science behind the data, which is used by MotoGP staff to improve safety. And sensible analysis of the crash statistics can tell us a lot about what’s going on in MotoGP, especially about how each rider gets along with his bike.

What do this year’s figures tell us? The usual, really: that the annual crash rate continues to increase. In 2016 for the first time there were more than one thousand crashes across all three classes. Last season the total increased to 1126, which makes an average of 62 crashes per weekend. That’s a lot of battered bodies, smashed carbon fibre and poorer teams pushed to the brink of bankruptcy.

Five riders crashed more than 20 times, with one reaching a new record of 31 accidents. If you are a rider this isn’t a number of which to be proud, but in some ways the total number of crashes is something that MotoGP can be proud about, because it’s not the accidents that matter (unless you’re paying the repair bills) but the serious injuries sustained.

You surely don’t need me to tell you that if you had crashed 31 times in MotoGP’s inaugural 1949 season that there’s no chance you would’ve lived to tell the tale. Riders raced around the Isle of Man, through the streets of Bern in Switzerland, between the hedges and ditches of the Ulster GP and around the original Spa-Francorchamps, where riders joked that there were so many memorials around the nine-mile street circuit that they could make a fence with them.

Sixty-nine years later, racing couldn’t be more different. Everything has changed, in all kinds of ways. For a start, bikes and riders are much more closely matched. During the 1949 season the average winning margin was 46 seconds; in 2017 the average gap was 2.11 seconds, with more than half the races won by less than 1.5 seconds. It doesn’t take a genius to work out what effect this has on the riders: the racing is so much closer that they must take big risks to make the difference.

So it’s just as well that the tracks are many, many times safer. During the 1950s there were 28 fatalities at Grand Prix events, which gives us the jaw-dropping average of a death every two or three race weekends. The 1960s and 1970s weren’t much better, with 25 and 24 deaths. Only once the riders ganged together to stop the slaughter by hiring Mike Trimby (now CEO of teams association IRTA) did the horror start to abate. During the 1980s 14 riders lost their lives. By the 1990s that number had reduced to two, with only one death in the 2000s. This last decade hasn’t been so good, with Shoya Tomizawa, Marco Simoncelli and Luis Salom all losing their lives.

Of course, the fact that modern race tracks do mostly present a get-out-of-jail-free-card to riders does encourage them to take further risks to find that extra tenth of hundredth of a second. That’s another reason for the increase in accidents; although Salom’s trust in the system was tragically confounded.

Ironically, while primary, second and tertiary safety have improved dramatically (bikes are safer, tracks are safer, riding gear is better and medical care is better), modern racing has increased danger in another way. The push for ever-closer racing to thrill sensation-hungry audiences has created technical regulations that minimise the differences between bikes, so that we get to see gangs of riders battling for every inch of race track. It’s no coincidence that both Tomizawa and Simoncelli were killed when they fell and were hit by bikes following closely behind.

The last Moto3 race of the year at Valencia produced another scary moment when Fabio Di Giannantonio crashed at top speed in the midst of a tightly packed group. He tagged the bike in front, with the bike immediately behind just inches away. Luckily his trajectory took him and his machine out of the way, but that could so easily have been a huge high-speed pile-up. And it’s very, very difficult to protect riders when fallen machines make contact with fallen riders at speed.

MotoGP’s king crasher of 2017 retained his crown from 2016. Sam Lowes crashed his Aprilia RS-GP 31 times (not always his own fault, it should be noted), which was once more than he fell from his Kalex Moto2 bike the previous year. Next was Gresini Moto2 rider Jorge Navarro, who crashed his Kalex 30 times during 2017’s 18 race weekends; then Marc Márquez on 27, Alvaro Bautista on 26, Cal Crutchlow on 24, Sandro Cortese on 22 and Axel Pons and John McPhee on 20 each.

Márquez’s total is without doubt the most remarkable, because only two of his 27 falls came in races and despite the other 25 he won the toughest title of them all. The Márquez style is to push beyond the limit to gain vital data for himself and for his engineers. No one else has ever done quite what he does; this is new territory for motorcycle racers.

“If you are always pushing at the limit you get a better feeling with the bike and give better information to the mechanics,” he says. “If I crashed 27 times, I was very close to crashing maybe 50 times! That gives me a feeling with the bike – you understand many things, what crashes you can save and so on.”

Those who crashed the least were Moto3 runner-up Romano Fenati and Miguel Oliveira, both on three tumbles. This tells you a lot about Oliveira’s talent: a 22-year-old in his second year in the class who had to develop a chassis from new and ended up winning the last three races of the year. Then came Valentino Rossi and Dominique Aegerter on four offs each, then Andrea Dovizioso and Moto3 champ Joan Mir on six apiece. These are all riders who know how to stay just this side of the edge.

MotoGP crashes increased to a record 313, an average of 17.4 per weekend, a dramatic contrast to the 98 crashes of 2006, an average of 5.8 per Grand Prix. That statistic, right there, should give you some idea of how much more competitive and demanding MotoGP has become over the past decade. Last season Moto2 crashes also increased to 434, an average of 24.1 per weekend; while Moto3 tumbles dropped slightly to 379, or 20 per weekend.

The race that claimed the highest number of fallers was (no surprise) September’s San Marino GP where race-day rain turned the circuit into an ice rink. By the end of the weekend no fewer than 140 riders had bitten the Misano asphalt.

The total sum of broken bones from those 1126 accidents were six collarbones, three ankles, two fingers, one pelvis, one wrist, one upper arm, one forearm, one fibula and a toe. There were several concussions, a couple of dislocations and numberless batterings and bruisings. Every one of those injuries hurt like hell, but the amount of suffering against the number of crashes is remarkable, and a testament to modern circuit safety and riding gear.

Next year the racing will no doubt be even closer, because that’s the way it goes, so there will most likely be even more crashes. MotoGP is safer than it’s ever been, but all too often riders are only inches away from real disaster. We all want super-close racing, but it can come at a price. We should never forget that.