Where will Joan Mir, Jorge Lorenzo and Andrea Iannone end up next year? MotoGP’s silly season is about to reach its climax 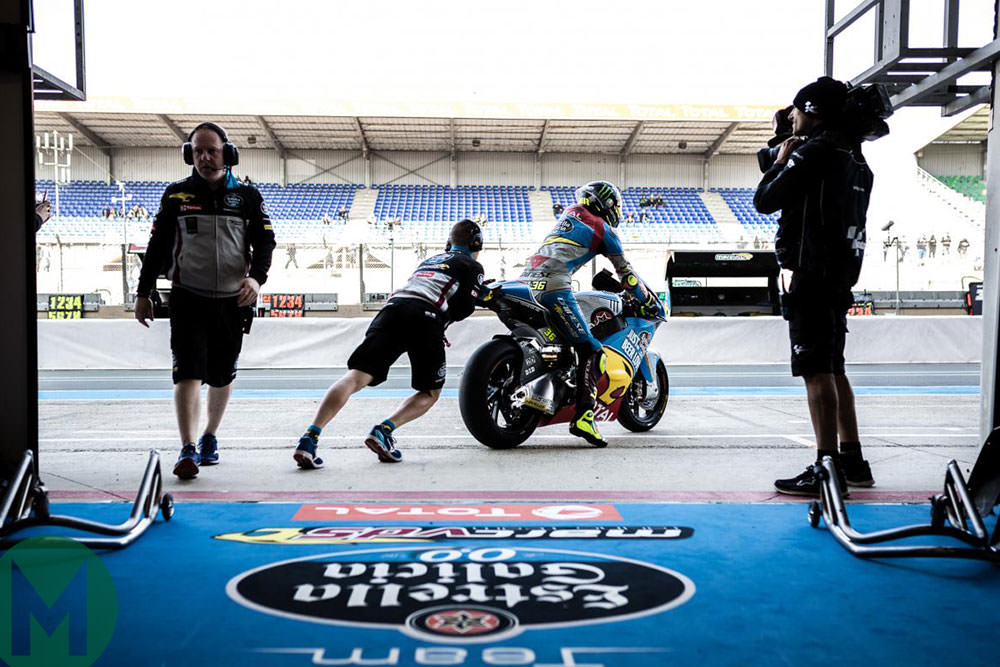 Many MotoGP journalists spend a lot of time chasing contract stories. I gave up years ago, even though I know that you lot love wheeler-dealing tales from the paddock.

I gave up partly, mostly because when journalists put contract questions to riders, personal managers, team managers and factory bigwigs, they are answered with forked tongues. And how could it be otherwise? There’s a lot at stake – the careers of riders, the reputations of manufacturers and many millions of euros – so why would anyone in their right minds tell a journalist the truth?

But sometimes it’s impossible to run away from writing about deals rather than wheels, so here goes…

The big deal in MotoGP deals right now is the 2019 whereabouts of Joan Mir, the reigning Moto3 world champion who scored his first Moto2 podium last time out at Le Mans. Depending on what you read and where you read it, the 20-year-old Spaniard from Mallorca has already signed for Suzuki Ecstar, is set to take his place alongside Marc Márquez at HRC (with whom he signed a pre-contract some time ago), is considering a move to Ducati, or all three.

This feeding frenzy is reminiscent of the race to sign Mick Doohan at the end of 1988, when the 23-year-old Aussie was making a name for himself riding a Yamaha FZR750 in Australian and Japanese superbike events. Doohan had Suzuki, Honda and Yamaha after him, but in fact was already committed to Suzuki, because the factory’s first 500cc world champion Barry Sheene had convinced him to sign a letter of intent with the brand.

Then fellow Aussie Wayne Gardner called up Doohan and told him Honda wanted him. Then Yamaha took him to its test track and let him have his first go on a 500 GP bike (which he crashed). On the same trip he met up with reigning 500 champ Eddie Lawson, who advised him to forget the others and go with Honda.

“That night we went out and got pretty drunk,” Doohan recalled. “We ended up breaking into a go-kart circuit and driving around holding torches.”

HRC clinched the deal by taking Doohan to its Asaka HQ, where he met his future crew-chief Jeremy Burgess. “The whole HRC thing was a wow,” he said.

But what about the pre-contract with Suzuki? “Barry came up with this idea: he told Suzuki I’d got a load of suspicions about riding Suzukis. They must’ve been shaking their heads, going, ‘this guy’s weird, best get rid of him’.”

This is why it’s so important to sign the right young gun at the right time.

Mir is in demand because he’s very fast, very clever and very young. Even though he’s only just graduated to Moto2 he’s already got the hang of riding a much heavier and more powerful bike on much fatter tyres by adjusting his technique to focus less on braking at the last moment and more on preparing the corner exit, so he can open the throttle sooner. In fact he’s been getting ready for this switch for the past couple of years, riding a Honda CBR600 around his local Circuito Mallorca.

Where Mir goes will of course impact other riders. If he races a Repsol RC213V next year then Dani Pedrosa will be looking for a new ride and if he races a GSX-RR then Andrea Iannone will be searching for a seat.

And then there’s Jorge Lorenzo, who’s yet to win a race with Ducati, after 23 attempts, at the rate of about £800,000 per race (if rumours of his salary are to be believed). If Mir does sign with Suzuki and Lorenzo fails to impress Ducati at the next few races, the fourth biggest race winner in premier-class history could end up without a ride next year.

Ducati has an option on Pramac rider Danilo Petrucci, which expires at the end of June, so the factory must tell the Italian its intentions by then or risk losing him. The future of Petrucci’s team-mate Jack Miller is already assured. The Aussie will stay at Pramac next year, riding a full-factory GP19, then move to the factory team at a later stage.

Petrucci had his best-ever ride at Le Mans, chasing winner Márquez all the way and beating Lorenzo by eight seconds, but he doesn’t think this is necessarily why Ducati might want him.

“The choice for Ducati is me or Jorge – and if they choose me it’s because my salary is less!” said Petrucci after the race.

Lorenzo is expensive, there’s no doubt about that. And despite his failure to win a race since 2016 he still thinks he’s worth it. “Everyone in the paddock knows the value of Jorge Lorenzo and what I can do on a bike when I feel good,” he said at Le Mans. “For eight or nine years [in fact six] I was always first or second in the championship.”

Even if the 31-year-old Spaniard redeems himself with great rides at Mugello and Barcelona, Ducati won’t want to re-sign him at anything like his current (rumoured) fee of £10.5 million per year. Not only because its management judges his value to be less than it was when he signed for Ducati in April 2016, but because it has already given Andrea Dovizioso a well-deserved and considerable pay rise for 2019 and 2020.

What about Suzuki? The smallest of Japan’s MotoGP manufacturers may not be able to afford Lorenzo, even if it gets a (rumoured) deal with Monster and even if its engineers know he would most likely be a perfect fit on its GSX-RR. Lorenzo wins races with his devastating corner speed, which is why he would go well on the Suzuki and is also why he hasn’t gone so well on the Ducati, because how can you use your devastating corner speed when you must hammer the rear brake mid-corner to get the bike turned? Lorenzo’s only hope if he does want to ride the GSX-RR is to drop his asking price by a considerable margin.

If both these deals fall through, there’s one other factory seat still going; at Aprilia, but the smaller of MotoGP’s Italian factories would surely baulk at Lorenzo’s salary and instead go for Iannone or Petrucci (if he’s available), who have the added attraction of being Italian.

And then there’s the latest rumour of Yamaha saving Lorenzo by giving him a ride on one of its independent-team YZR-M1s, probably to be run by Marc VDS. But there are problems here too. Money, again (unless Lorenzo takes a 90 percent pay cut to save his career), plus a likely chorus of disapproval from factory-team sponsor Movistar and star-rider Valentino Rossi.

In other words, it’s all ifs and buts, truth and lies, a bit of a mystery, with myriad other possibilities in the mix, if only I could be bothered. And yet the biggest mystery in this year’s silly season is surely Yamaha and Maverick Viñales agreeing terms for 2019 and 2020 way back in January. Why was Yamaha so keen to keep a rider who hadn’t won a race in eight months and why was Viñales so keen to stay on a bike he didn’t like and now likes even less? I still can’t fathom it out. Imagine what might have been if they hadn’t done a deal so early: Viñales returning to Suzuki and Lorenzo back to Yamaha?