Yesterday’s San Marino Grand Prix wasn’t just two riders fighting to win a race. It was two riders fighting for the world championship – four races to go, 48 points between them. It’s a significant difference, but far from insurmountable in these topsy-turvy times.

Both Pecco Bagnaia and Fabio Quartararo were both all-in, everything on the line: Bagnaia in pursuit of a perfect 50 points from the last two races, Quartararo willing to risk anything, including a safe 20-point haul for second, to take what might be a vital five points from his title rival. In the process, they both broke the race record by more than seven seconds.

And how times have changed. A decade ago it would’ve been Casey Stoner climbing all over the Ducati as the rear end pumped madly out of turns, while Jorge Lorenzo glided serenely through the corners on the Yamaha.

During yesterday’s final laps, Quartararo had Yamaha’s YZR-M1 all crossed up as he took big chunks out of what had seemed like Bagnaia’s unassailable lead, while Ducati’s latest Desmosedici looked like it was on rails.

MotoGP goes to COTA next, then back to Misano and finally to Portimao and Valencia. COTA has always been a bad track for Ducati, but that means nothing now, because everything is different – the 2021 Desmosedici seems to turn as well as anything, especially with the artful Bagnaia on board.

“The good thing about this bike is that it’s very stable, we can enter fast corners with a lot of speed. So I feel very great in fast corners at every circuit.”

There’s no reason Bagnaia shouldn’t win again at Misano 2, after all he’s just about carved his own groove around there, riding his Panigale V4 road bike and previously aboard VR46 Yamaha R6 track-day bikes.

Then on to the rollercoaster of Portimao, where surely April’s Portuguese winner Quartararo will have the advantage? But maybe not, because Bagnaia fought his way through from 13th on the first lap to finish a close second.

And finally Valencia, where Bagnaia’s team-mate Jack Miller led most of last year’s Valencia GP but was beaten on the last lap by less than a hundredth of a second by Quartararo’s team-mate Franco Morbidelli.

In other words, anything could happen over the next eight weeks.

Bagnaia is certainly on a roll – his confidence set alight by his first MotoGP victory at Aragon – and the Ducati is the most-improved motorcycle. The 24-year-old former Moto2 world champion was utterly immaculate at Aragon and Misano, barely putting a wheel wrong and he was impervious to massive pressure from Marc Márquez and Quartararo.

He almost makes MotoGP’s previous smoother operators – Lorenzo and Dani Pedrosa (of whom the late, great Angel Nieto once said, “he rides like an angel”) look like out-of-control maniacs. 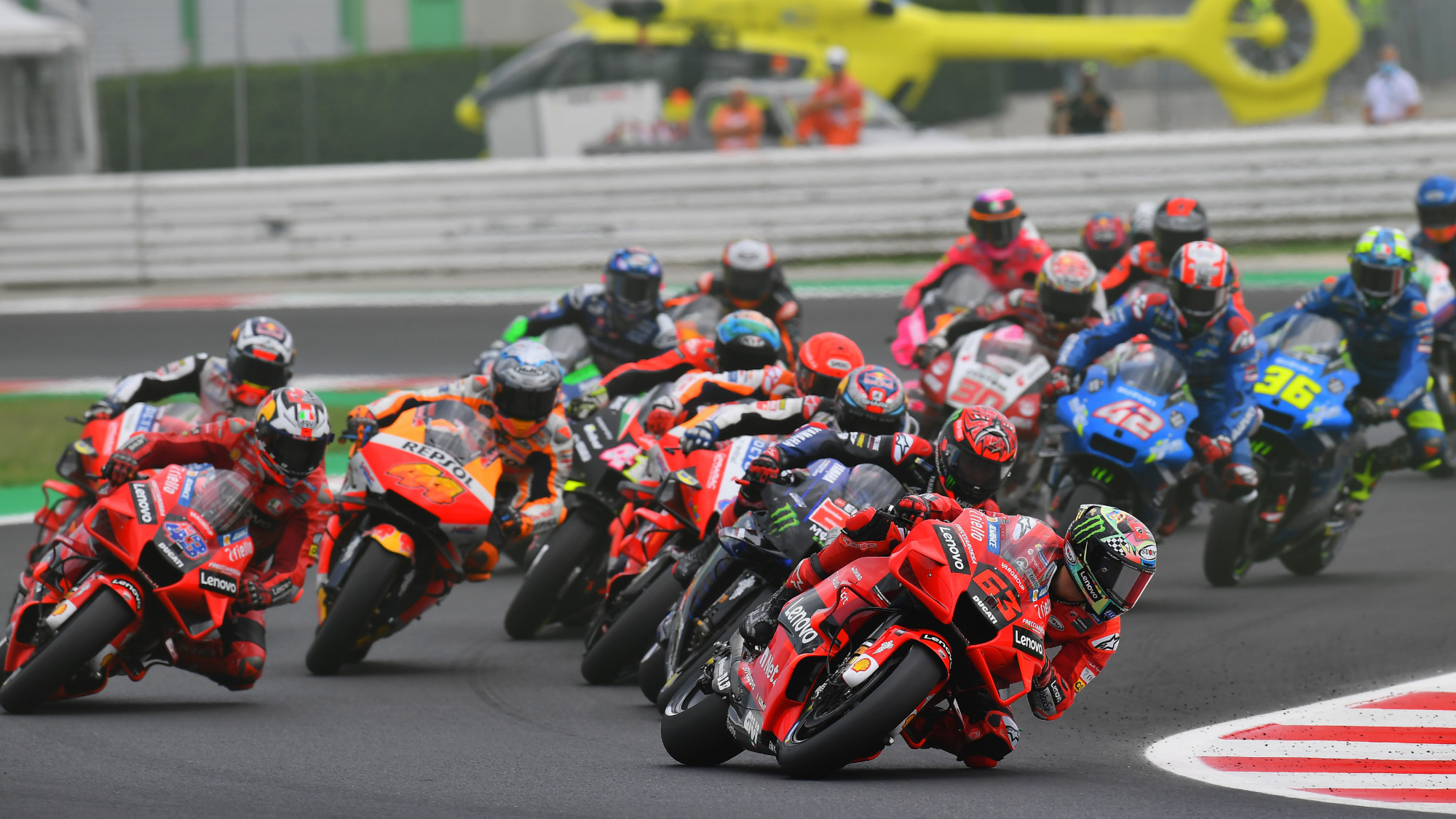 Bagnaia leads from pole, Quartararo is about to get mugged by Ducati pair Miller and Martin

He used Lorenzo’s Ducati data to help him ride so smoothly and Miller’s data to help him understand how to better heat the front tyre so he doesn’t lose grip going into corners. During his rookie MotoGP season he crashed 14 times, always losing the front. So far this year he’s slid off just three times.

Yesterday he was at his most breathtaking through Turn 11, Curvone, the frankly terrifying 170mph right-hander at the end of the back straight. And it is through fast corners that you can make the most time on your rivals.

And it is at places like Curvone that you must be at your most precise. When a MotoGP rider brakes he doesn’t just grab the brake lever as hard as he can and hold on for grim death until he lets go and flings the bike into the corner. He modulates lever pressure during the various stages of the braking zone, scrubbing off speed where it can be done most efficiently, then ensuring he has the bike in the right attitude to get the geometry and front grip just right to enter the corner fast and turn the bike with corner speed.

“It’s something that I’ve worked on a lot, because in my first year in MotoGP I struggled a lot with braking,” said Bagnaia, after bettering Quartararo by just three tenths of a second. “I started working a lot in that area in the last part of 2019. Last year I already made a step, but I’ve also worked a lot here with the Panigale street bike to manage the front tyre better.

“This year the feeling I have with the front tyre is incredible. The bike setting is very similar compared to last year, but the feeling has grown a lot, which helps me enter fast corners like Curvone.

“One good thing about our Panigale is that in terms of riding style and tyres – because the traction is very similar with the Michelin endurance tyres we use – the front behaves very similarly. So I worked a lot with this bike and tyres and also with the data of Jorge Lorenzo [from 2018]. Now I’m braking as hard and as strong and as late as I can, but I make the difference more in the entry.

“Also, the good thing about this bike is that it’s very stable, so we can enter fast corners with a lot of speed. Our bike doesn’t shake a lot. So I feel very great in fast corners at every circuit.”

Miller says that Bagnaia’s super-hang-off riding style also helps in super-fast corners. “He uses the body like a sail,” he said.

Bagnaia’s speed was so devastating during the first few laps – when riders really need confidence in the front tyre, before it’s up to its ideal temperature – that he was 1.4 seconds ahead after just three laps. 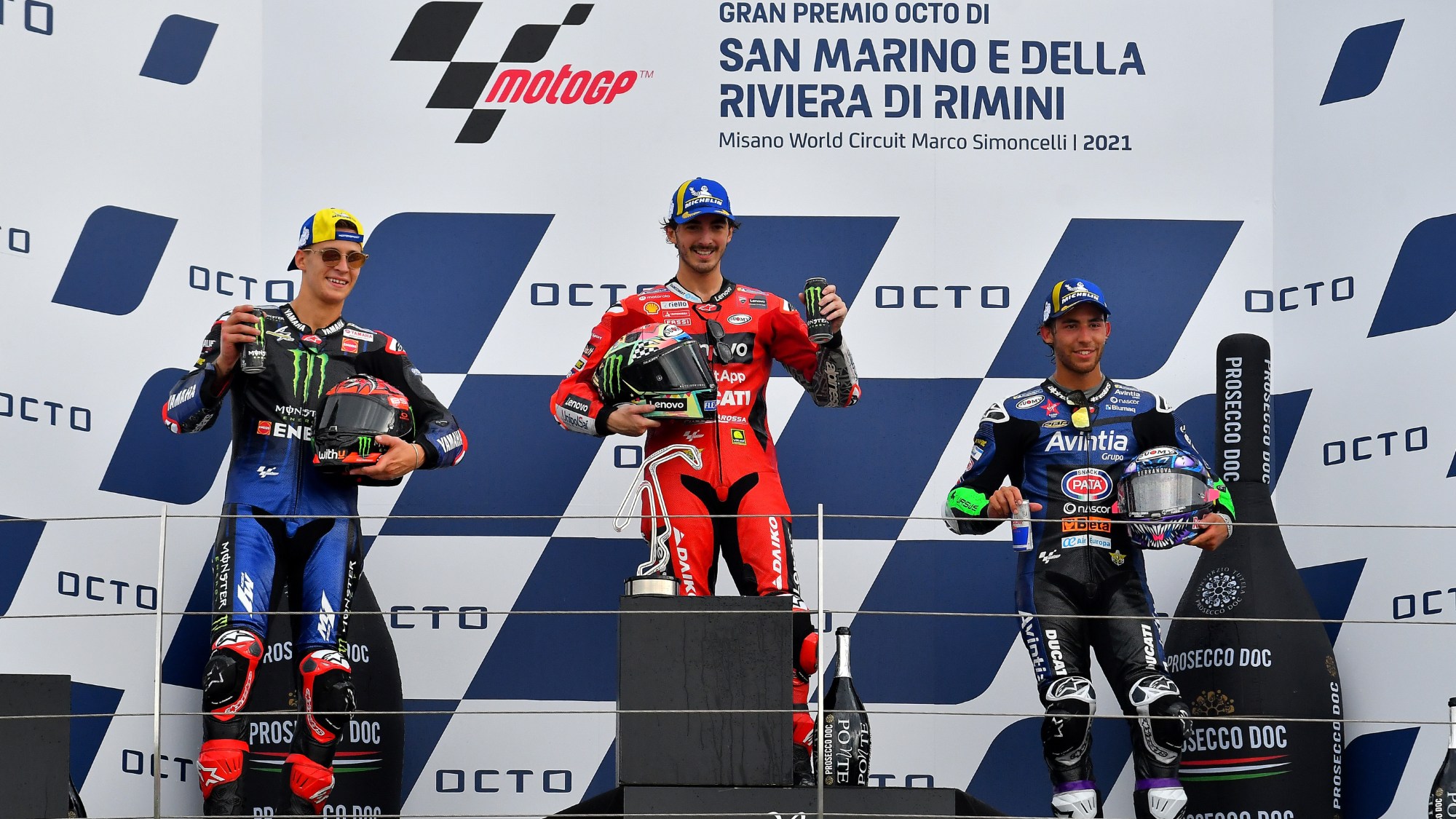 Surely this was going to be a procession. But then tyre choice and Quartararo’s willingness to flirt with the asphalt brought the race alive.

During the opening laps the Frenchman got mugged by the Ducatis of Miller and Jorge Martin, so by half-distance he was almost three seconds behind Bagnaia. From thereon in however, he started closing the gap – slowly at first, then much faster.

His medium rear tyre had so much more traction than Miller’s soft that he quickly swept past the Aussie and set off after the leader – 13 laps in which to close a 2.7sec gap. During the next few laps he took a tenth or two out of Bagnaia – good but not good enough.

Then on lap 19 he closed half a second, alarming Bagnaia who tried to up his pace on his weakening rear tyre and nearly crashed at the first corner after hitting a bump on the brakes.

“His victory in Aragon unblocked him mentally. I think it will be a very good fight with Quartararo. They are the two fastest riders and the championship isn’t over yet.”

With two laps remaining the gap was down to three tenths and a lap later it was just one tenth but Bagnaia regained his cool and didn’t put a wheel wrong. Of course his Desmosedici also did its bit – shapeshifter engaged, desmo valves pumping at 18,000rpm to accelerate like a rocketship in sectors two and three, where straight-line speed is everything.

“For sure I was worried,” he admitted. “But I was also sure that passing a Ducati at Misano is not easy.”

Quartararo was close enough to attack Bagnaia on the last lap but it didn’t quite work out.

“I wanted to overtake in Turn Six [the left-hander onto the first straight of Misano’s three straights], but I had quite a lot of spin and through sector three he was like a time attack. When I saw the lean angle he had at Turn 12, I said, okay, I think it’s the moment to keep calm.”

Bagnaia’s speed through Turns 11, 12 and 13 brought him to the Turn 14 hairpin – Misano’s favourite overtaking spot – too far ahead for Quartararo to launch a last-gasp lunge.

“I was fully on the limit,” grinned the Frenchman. “And honestly this is how I enjoy riding. I had three or four moments when I was close to being on the ground. Once I totally lost the front.

“And to catch Pecco was one thing, but to overtake was another story. I was catching him in sectors one and four, but he was pulling away in sectors two and three, and he’s really precise with his lines and I couldn’t do anything.” 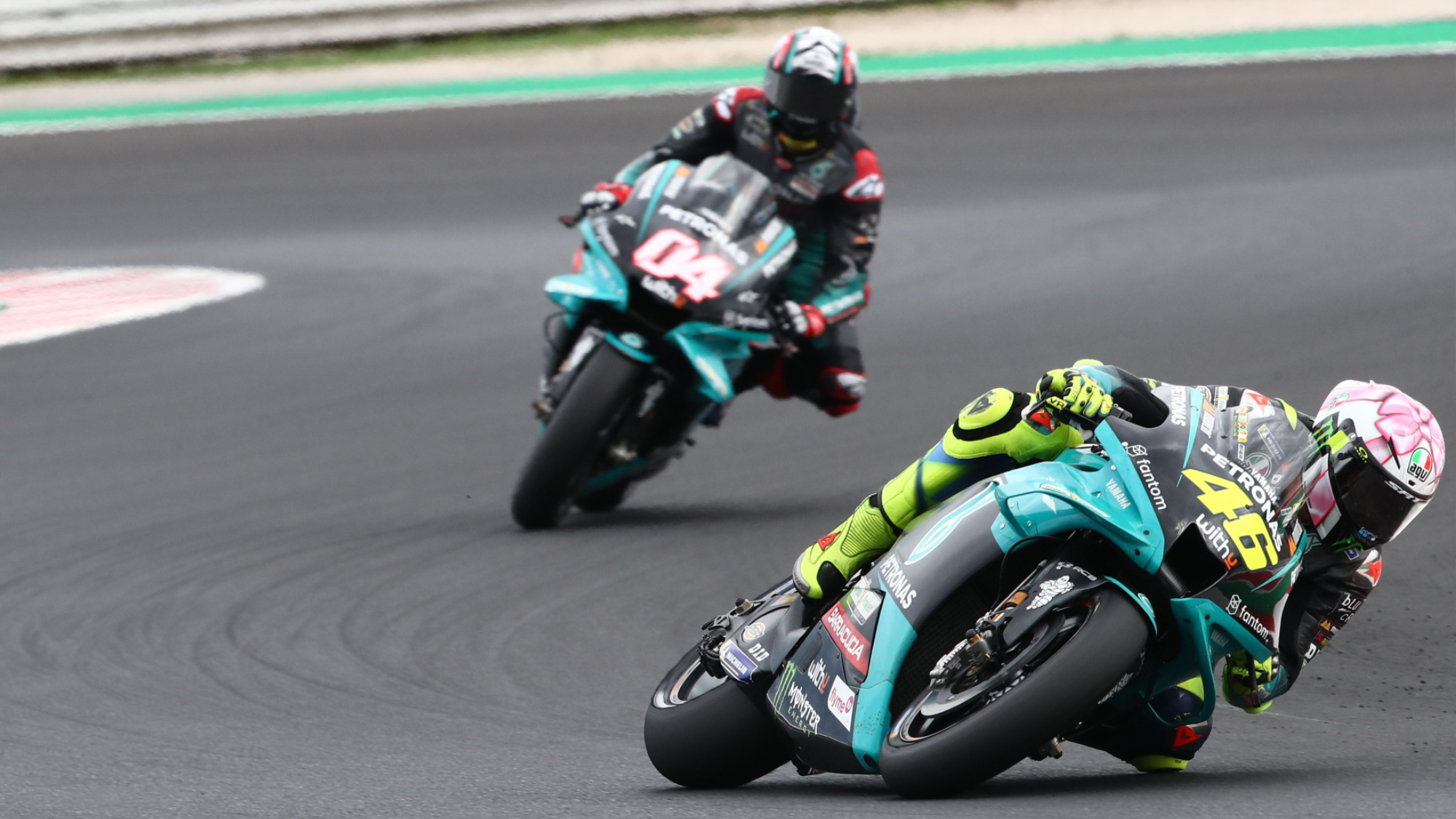 Bagnaia rode one of the slowest slowdown laps in history – stopping to celebrate with VR46 Academy riders and staff at every other corner: Misano Moto3 podium stars Niccolo Antonelli and Andrea Migno, Moto2 men Marco Bezzechi, Celestino Vietti and Stefanoi Manzi, VR46 CEO Albi Tebaldi, managing director Gianluca Falcioni, trainer Carlo Casabianca and of course a big hug from the man himself, Valentino Rossi, who can’t have been happy with 17th place in his penultimate MotoGP race on Italian asphalt but was definitely cheered by his protégé’s victory.

“It was trying to survive. I wanted to attack but I was defending – not a good feeling.”

“Ah, it’s great, something special, also with the double podium in Moto3,” beamed the 42-year-old. “Pecco is very fast this year, but I think his victory in Aragon unblocked him mentally. So I think it will be a very, very good fight with Quartararo. They are the two fastest riders and the championship isn’t over yet – I think we will see a very good fight to the end.”

On the other hand, Misano was the end of reigning champion Joan Mir’s hopes of holding onto his crown. He’s not mathematically out of the title fight, but he finished sixth, ten seconds down, struggling once again with his front tyre.

“I expected more and it’s difficult to accept the championship is over,” he said.

Mir found himself caught between a medium and a hard place – the medium front was too soft for him but the hard tyre he chose was too hard, giving him a few scares in left-handers.

“It was trying to survive,” he said. “I wanted to attack but I was defending – not a good feeling.”

Mir won the 2020 crown and began his title defence this year usually preferring the medium front, but as the pace has increased he’s moving towards the hard.

“I need something more, I cannot ride the bike with the medium,” added the world champion. “When we saw the temperature coming down [the track was almost ten degrees cooler than it had been on Saturday] the team recommended I use the medium. Álex [Rins] felt great with the medium all weekend, so it works for him but not for me. My style is different – I ask much more of the front.”

Of course, Rins crashed out with the medium, while trying to stay with surprise podium finisher Enea Bastianini.

MotoGP is moving on.