Empires come and go: the Greek, the Roman, the Portuguese, the British… It’s the same in sport, especially sports linked to industry and technology.

Britain’s racing empire lasted longer, from the birth of GP racing until Barry Sheene’s final victory: 358 GP wins in the 32 seasons from 1949 to 1981. In the 37 seasons since then, British riders have won just 24 GPs.

What might explain these strange patterns in racing history?

British riders and manufacturers ruled motorcycle racing from the 1920s, largely thanks to lessons learned at Brooklands and the Isle of Man TT. When the world championships commenced in 1949, British and Italian riders and bikes led the way. It wasn’t until 1953 that another country won a riders or constructors title. And even when the British industry collapsed, foreign brands continued to hire British riders, until other nations got up to speed.

Three-time 500cc world champion Rainey took it upon himself to keep US racing going. It’s been a tough road, but MotoAmerica is moving forward one step at a time

Since then Italy and Spain have become bike racing’s strongest nations. Both had important motorcycle industries, and even though Spain’s industry is no more, powered two-wheelers are still a big part of national culture in these sun-blessed Mediterranean lands.

But how come the American empire crumbled? This wasn’t an industry thing. US racers disappeared from grands prix because racing technology improved and riding techniques changed.

‘King’ Kenny Roberts, Freddie Spencer, Eddie Lawson, Wayne Rainey and Kevin Schwantz all made it big in GPs because they started on the dirt, so they could cope with vicious 500cc two-strokes overpowering their tyres. Once Honda introduced its rider-friendly big-bang engine and Michelin improved its tyres in the 1990s, the Europeans could ride 500s just as fast.

The Australians mostly disappeared from GP racing for the same reason, although occasionally Aussie dirt track still breeds a genius like Casey Stoner. But nowadays, Europeans like Marc Márquez also hone their talents by getting sideways on the dirt.

American racing didn’t only suffer abroad; it suffered at home. Badly. The AMA Superbike Championship fell into the hands of people who didn’t know what they were doing. By the time Rainey and MotoAmerica took over in 2015 the series was almost dead. 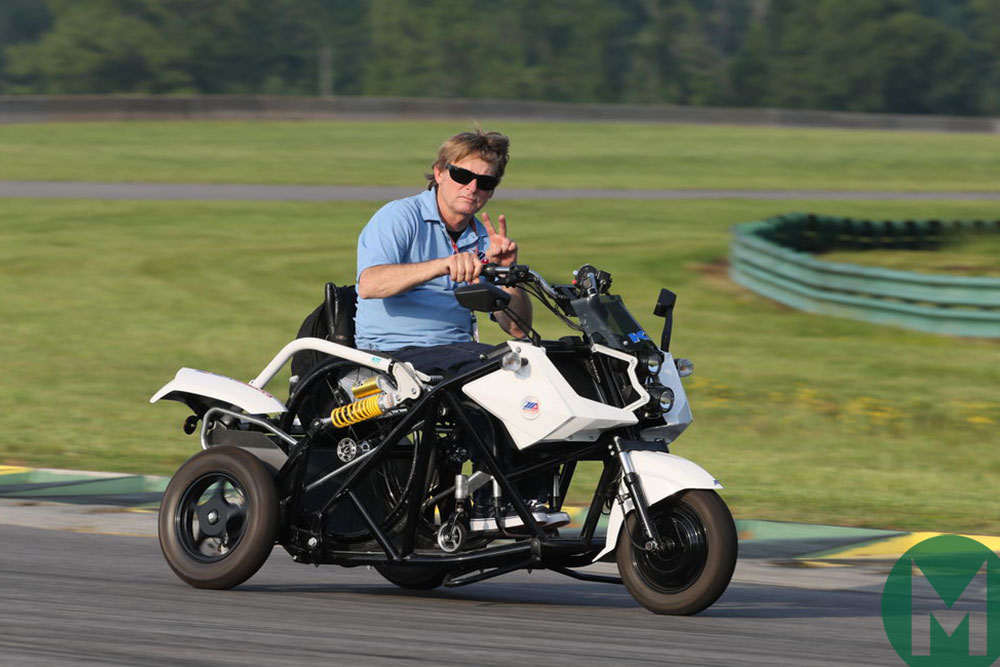 Three-time 500cc world champion Rainey, who was paralysed from the chest down when he crashed at Misano in 1993, took it upon himself to keep US racing going. It’s been a tough road, but MotoAmerica is moving forward one step at a time.

The 2019 MotoAmerica superbike series starts at Road Atlanta on April 7, with round two during the Americas MotoGP weekend. This year’s big news – apart from the fact that MotoAmerica is now motorcycling’s biggest-paying championship – is prime television coverage on Fox Sports 2 and NBC Sports.

“Superbikes will be shown live on Fox Sports 2, then we have a show called Inside MotoAmerica on NBC Sports,” says MotoAmerica president Rainey. “The NBC show will be a behind-the-scenes lifestyle show. Then we’ve got a live streaming video pass called MotoAmerica Live+ for all our fans outside the US. Having Fox and NBC is a big deal for us – the total reach of those two shows will be around 140 million households, so we’ll be getting to a lot of people who don’t usually watch bikes.

“When we took over the championship it wasn’t very healthy, so we had to work to stimulate it. Now we are running World Superbike rules and we have some pretty strong talent and teams in the top 10.”

The money is impressive too…

“We are putting in $4.5 million prize money this year, with $1.5 million going to superbikes, and there’s another $6 million contingency (bonus) money from the manufacturers. You can make a good living here: a guy finishing in the far end of the top 10 is going to make over $100,000, so the top guys are doing really well.

“We believe the series has a good shot commercially, but from a rider point of view we need to get Americans racing abroad again, showing their skills and getting noticed. They need to race in the Suzuka 8 Hours and we are working on a Match race with BSB.”

This will be music to the ears of fans who remember the US versus UK Transatlantic Match races that took place every Easter throughout the 1970s and 1980s. It was at these events – at Brands Hatch, Mallory Park and Oulton Park – that Roberts, Rainey, Schwantz and others first made their names on the other side of the Atlantic.

“Stuart [Higgs, BSB series director] and I have talked about it for a couple of years,” Rainey adds. “We spoke to Daytona, because that’d be a cool place to have the series, but it didn’t happen, so we are looking at other venues here. We want to make something happen sooner rather than later because it’s important for both series.”

Rainey’s other big job is to find some young talent, because the MotoAmerica superbike class is mostly ruled by older riders, including 35-year-old former Moto2 world champion Toni Elias and current champ, 26-year-old Cameron Beaubier, who contested the 2009 125cc world championship. In Europe kids start racing before they can read and write and are fighting for world titles when they are teenagers.

“We are now running a Supersport 300 class which is proving really popular. In the US you can’t roadrace under 14, but we’re trying to figure out how to get younger kids on the track.”

Minimoto and pocketbikes are the way to go and Rainey realises this.

More: Lawson, Rainey and Doohan: giants of their era

“There are quite a few minimoto clubs throughout the US. Recently a club came to us and they’re trying to combine the regulations and everything else into one major club, while getting MotoAmerica and the AMA behind it. We want to focus on that, so that kids can race minimoto from the age of five until they can go into a MotoAmerica class.”

None of this is easy. Cultures in developed countries have changed. The thrill of the internal combustion engine and the lure of the open road aren’t what they used to be. Decades ago, kids grew to be petrolheads, now they’re more likely to be iPad-heads.

“I started riding bikes when I was six and started dirt-track racing at nine,” Rainey explains. “I could race at seven different race tracks within a 50-mile radius, seven days a week. At that time there were 6000 pro-dirt-track riders in the US, now there’s less than 500. Roadracing and motocross have the same problem.

“So we have to adapt. I have a passion for it, so I’m doing my part to take it forward. Roadracing was going away in the States and I didn’t want to see that happen. Now we’ve got a good foundation with the MotoAmerica series and we will see what the future brings.”

Not many nations get a second chance at an empire, but MotoAmerica is doing everything it can to make the USA a global racing force once again.