Many people in the paddock and most fans around the world are asking when will the 2020 MotoGP world season really start. Will the team freight currently languishing in Qatar end up being unpacked and used in anger in the USA, in Argentina or back in Europe?

These are the wrong questions. The real question is this: how long will most of the paddock be able to survive while there’s no racing? Teams need regular income like everyone else. They earn money by going racing, from sponsors, from rights-holders Dorna and from teams association IRTA. No racing equals no money. No money eventually equals going bust. 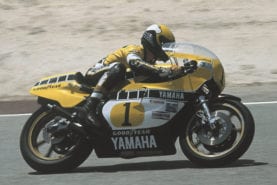 It is impossible to predict when the MotoGP season will properly start, following this weekend’s opening Moto2 and Moto3 rounds at Losail. No one knows, whatever they tell you, not even Dorna, IRTA or the FIM. People may say that the US round will go ahead or that the racing will start when the European season commences at Jerez in early May. But these decisions will be made by governments and health authorities, not by Dorna, IRTA or the FIM.

Dorna understands this. “Every day the situation around the world changes,” said Ezpeleta today. “All we can do is do everything we can to make the championship, with as many races as possible.”

Some other sporting events are due to go ahead behind closed doors, but how will that work in MotoGP? Circuits cover their costs and (hopefully) make their profits through paying spectators, so that’s not really a viable option.

Factory teams are not the main worry. They have manufacturers behind them, who will have (should have) cash reserves. The real concern is the backbone of the paddock – the majority of Moto2 and Moto3 teams who mostly live a hand-to-mouth existence, struggling to pay the bills in normal circumstances, let alone when a so-called biological Chernobyl stalks the Earth.

If coronavirus continues to spread – and it’s difficult to see how it won’t until a vaccine is found – the only people who can save the day are those at the very top, who will have (should have) money behind them. Just as the governments had to bail out the banks in 2008, so the buck will have to stop with Dorna and its private-equity owners Bridgepoint.

The next few weeks are going to be critical for all kinds of businesses, including the MotoGP business.