There may never have been a more thrilling Grand Prix race than Sunday’s spectacular at Assen, so why does Rossi say racing is more boring than it used to be? 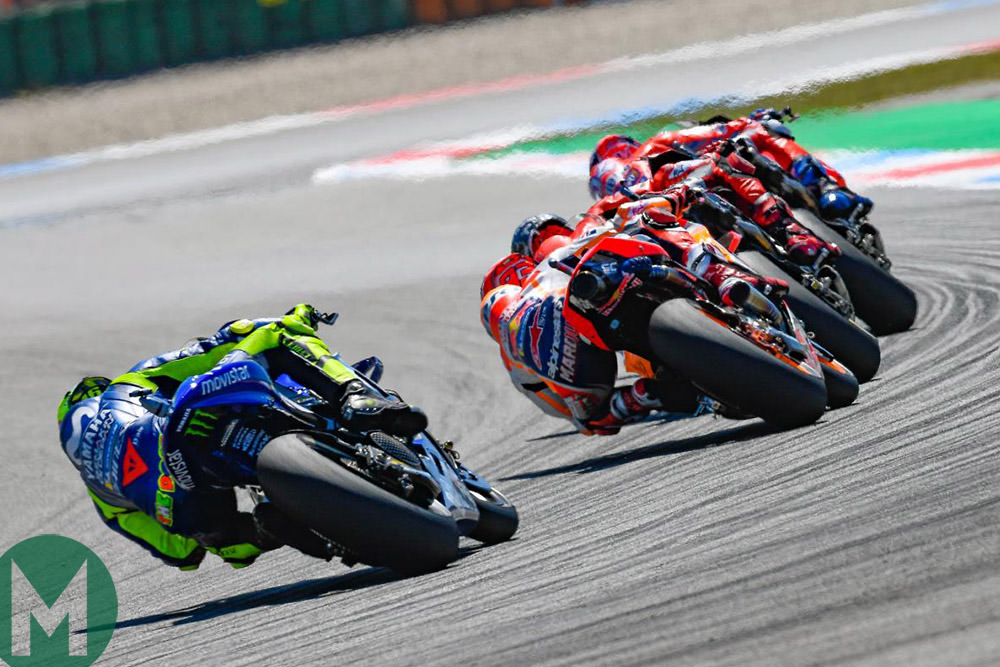 Wow. Epic MotoGP race. One of the best ever. More overtakes than in a decade of Formula 1. Closest top 15 in 70 years of Grand Prix racing. Hugely entertaining. And scary as hell.

Of course, motorcycle racing is supposed to be scary. It’s almost half the fun, whether you’re actually racing or just watching. I enjoyed every millisecond of Sunday’s race, but sometimes I could hardly hear what was going on for the ringing of alarm bells.

I hate to be the canary in the coalmine, but I know I’m not the only one. Those in charge of MotoGP left the paddock on Sunday night grinning from ear to ear, then breathing the biggest sigh of relief, happy to have witnessed such a breathtaking battle and delighted that everyone got away with it.

Assen is a unique racetrack. It’s very fast, very narrow and very ziggy-zaggy. And on Sunday it was very windy too. The circuit isn’t as quick as Phillip Island, that other MotoGP venue renowned for fierce battles, but many of the corners are faster, with little room to manoeuvre and with riders constantly changing direction and sometimes thrown onto each other’s lines, even when they don’t plan it like that. And there’s nothing in MotoGP like Hoge Heide, where riders flick from right to left at around 150mph, muscling a motorcycle that weighs almost 180kg in the early laps. If there’d been a multiple contact there, it would’ve been like a plane crash. That’s why I watched much of the race like I’d watch a horror movie – peeping through my fingers.


There was no quarter given at the #DutchGP!

We thought this clash between @marcmarquez93 and @maverickmack25 was the end of the duos challenge for the win…we were wrong! pic.twitter.com/wskdRpRQ6L

Valentino Rossi knows this better than most. When he clattered into Jorge Lorenzo at the preceding Meeuwenmeer right-hander he knew he was lucky not to go down. After the race the nine-time world champion seemed to thank a higher power for his survival, crossing himself in his garage, even though he’s not a religious man.

That lead bunch of eight riders – Rossi, Marc Márquez, Jorge Lorenzo, Maverick Viñales, Alex Rins, Andrea Dovizioso, Cal Crutchlow and Johann Zarco – were mesmerising to watch, like fighter pilots in a dogfight: diving, swerving, chasing their prey, avoiding their predators. As Márquez said afterwards: “attack and defend, attack and defend!”. Which isn’t an easy thing to do when you’re shifting along in fifth gear, one rival six inches from your left elbow, another six inches from your right elbow.

Crutchlow called it right on Saturday when he referred to his rivals as “a bunch of animals”. This rang particularly true on Sunday, because this wasn’t just racing rivalries, it was fear and loathing at Assen. There was a lot of bad blood coursing through the veins of that lead group: Rossi versus Márquez, Rossi versus Viñales, Márquez versus Viñales, Lorenzo versus Dovizioso, Lorenzo versus Rossi. So many scores to be settled.

But in the end, Márquez had it all worked out. He had been saving his tyres, waiting for the moment to pull the pin. He got past Rossi and Dovizioso on lap 22 of 26 and immediately upped his pace, laying down the fastest series of laps of the race to build a two-second lead going into the final lap. He knew that was the safest place to be, because he’s lost out at Assen’s final chicane before.

The race didn’t only look like one of the closest-ever premier-class Grands Prix, it was the closest-ever top 15 in almost 900 races; with just 16 seconds covering all the points scorers. You can thank Dorna, the manufacturers, Magneti Marelli and Michelin for that, for creating a technical landscape that allows no one to gain a serious performance advantage. But one thing is for sure – Dorna doesn’t need to change the rules any more to make the bikes any closer.

It’s worth comparing Sunday’s race with Assen’s very first premier-class world championship race. On Sunday the top five was covered by 2.9 secs. On July 9th, 1949 the top five was separated by four minutes and 37.9 seconds.

Rossi wasn’t around in 1949, but he’s been on GP grids longer than anyone else. On Saturday afternoon the nine-time world champion was asked how things have changed since his first premier-class Dutch TT in 2000, when the top 15 was covered by one minute and 54 seconds.

“This [the ever-narrowing time gap] is one of the biggest differences to then,” said Rossi after qualifying third in a top 10 covered by half a second. “In the last period we are always close, but this weekend we are even closer. Compared to 15 years ago the level of professionalism has increased a lot. Now the teams and especially the riders try to work on all the small details, so you try to learn and you try to understand, corner by corner, braking by braking. Fifteen years ago it was more romantic, you know: you rode your bike and you got your feeling. But it’s not like this now because you have to work more. Maybe it’s a bit more boring, but I think it’s good for the championship.”

When Rossi says his racing life is more boring than it used to be, he’s not being churlish, he’s merely stating a fact. In the modern era MotoGP riders spend more time poring over computer monitors than they do riding their bikes, so they are more at risk of screen burn than gravel rash. And when they’re not huddled in endless debriefs with their crew chiefs, data analysists, suspension engineers, tyre technicians and everyone else, they are pressing flesh with sponsors and doing meet ’n’ greets with fans. Motorcycle racing is no longer the rock and roll lifestyle it used to be, because there’s no time for high times and romancing the ladies. As the late, great Gary Nixon told me a decade ago, “these guys are going too fast to party!”.

I can’t be sure, but I suspect Sunday night might have been different for Assen’s great eight – a bit like the old days, when racers celebrated their survival on Sunday nights through an alcohol-fuelled haze. Phil Read, who won seven 125cc, 250cc and 500cc world titles in the 1960s and 1970s, remembers it well. “We were like Spitfire pilots,” he says. “It was like, fuck it, we’ve survived another mission, let’s live it up a bit… get pissed, go to nightclubs and redline the birds.”

Now is a good time to thank Rossi and the rest for working so hard and denying themselves all that fun to put on such a show.