Strange days in MotoGP. If Miguel Oliveira had had a front tyre that worked with his KTM RC16 perhaps he would’ve won his second consecutive Portuguese GP on Sunday. And if he’d had that tyre, perhaps he wouldn’t have lost the front during his final time attack in Saturday’s Q2 session.

And if Oliveira hadn’t crashed at that precise moment, bringing out the yellow flags, Pecco Bagnaia’s pole-position lap wouldn’t have been cancelled and the Ducati man wouldn’t have been way back in seventh at one-quarter distance.

And if Maverick Viñales’s fastest qualifying lap, also good enough for pole, hadn’t been cancelled because his rear tyre touched the green no-go zone on his fastest Q2 lap then he wouldn’t have been mired in the middle of the grid, from where either his brain or his rear tyre failed to perform as expected.

MotoGP’s green zones are now electronically policed by pressure sensors. Of course, we all know that sensors and computers are 100% infallible, don’t we? I now wonder if the green-zone sensors can pick up heavy loads from the very edge of the kerbs.

Once Oliveira, Bagnaia and Viñales had been taken out of the equation the race turned into a straightforward duel between Fabio Quartararo’s Yamaha YZR-M1 and Álex Rins Suzuki GSX-RR.

Both these motorcycles are essentially the same in concept and configuration, although for the last couple of seasons you would scarcely have known it. On Sunday the M1 finally seemed to work as well as the GSX-RR – cutting deep into corners, holding the line and not burning its tyres.

This maintained Yamaha’s unbeaten record into the third race, the first time they’d done that since 2010, when the M1 was undeniably the best bike on the grid.

Quartararo’s pace in FP4 made the race his to lose, so he did well to stay cool when he got badly beaten up on the first lap, going from pole to sixth. Presumably, he reminded himself that he had recovered from a worse start last time out at Losail and once again he had no problem scything through the pack. Last year either his head, his motorcycle or both wouldn’t have been able to do that.

During 2020 Quartararo mostly blamed his motorcycle for his woes but last weekend he admitted that he was the real problem, not the bike.

Right now it’s still too early to guess the secret to his 2021 form: either a revitalised bike, thanks to Yamaha’s engineers, or a reconfigured brain, thanks to his sports psychiatrist. Or perhaps he’s just wearing the same underpants he wore in 2019, when he was so fast and consistent.

“Now I’m mentally stronger and I’m complaining less,” he said during practice at Portimao. “This is helping, because I’m thinking more about my riding style than the bike.” 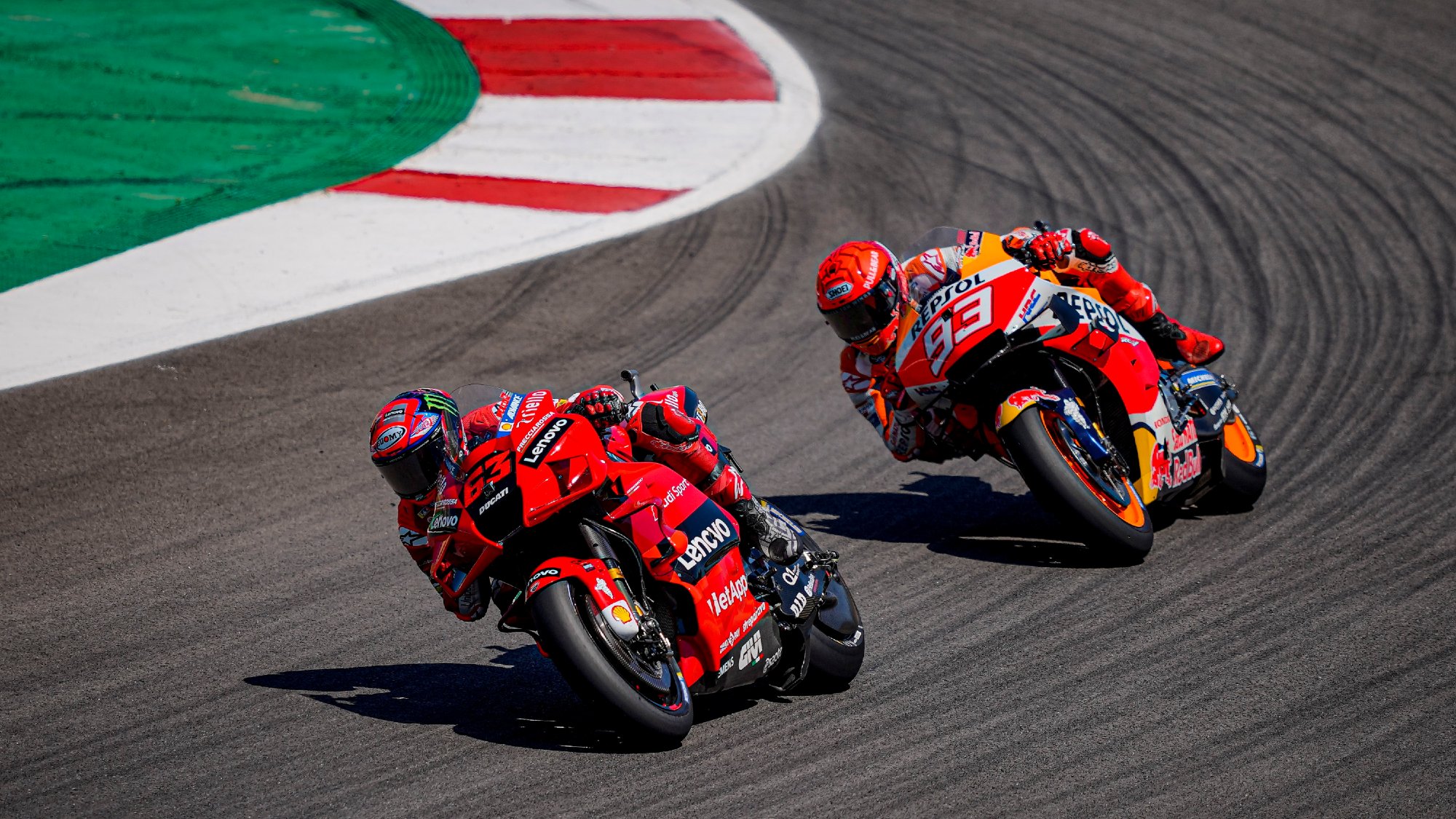 Bagnaia charging through from the fourth row

Sunday’s duel between the Frenchman and the Spaniard was a classic game of chess – each reacting to his rival’s moves, time and again. Quartararo would eke a few tenths on Rins, then Rins would close the gap, then Quartararo would open it again.

They were trying to break each other. Either that or their duel was going to turn into a last-lap barging match because at their pace it would’ve been pretty much impossible to pull off a clean pass through Portimao’s one-line serpentine layout.

Rins refused to give in because he believed he might crack Quartararo. Meanwhile, Quartararo thought he could stretch Rins into a mistake if he kept forcing him to push harder.

By lap 18 Rins was pushing deep into the unknown, establishing a new lap record. The very next lap he pushed too deep and lost the front into Turn Five, where it’s downhill, off-camber and a bit bumpy – very thin ice for a MotoGP bike. 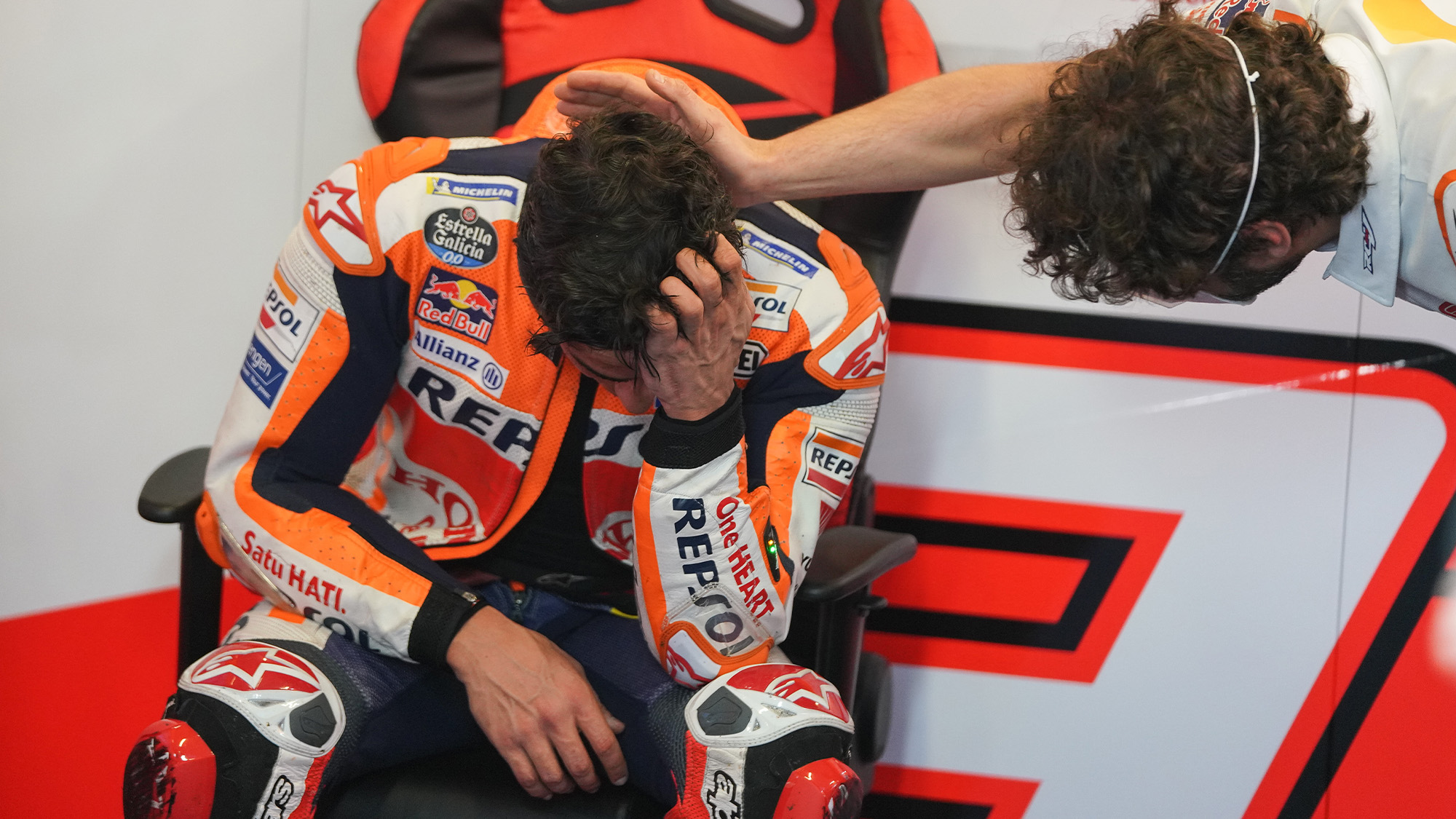 Many people said they weren’t surprised by Marc Márquez’s seventh-place finish at Portimao. But after the 25-lap race the six-times MotoGP champion certainly didn’t look like someone who thought he…

Quartararo had proved in practice that he was faster, but Rins had tried to negate that gap with a little derring-do.

“Yamaha have made a big step since last year,” said Quartararo, a comfortable championship leader after three races, just like last year. “Also, I have learned a lot. Last year when the bike wasn’t going so great I was always feeling negative. Now I’ve totally changed – always thinking positive. I arrived here knowing the bike is working well and even if a few things didn’t work well I only thought about what’s working well.

“To set the pace we set today wasn’t easy but I was focused and after practice we analysed the times pretty well and we knew we were a bit faster. In the middle of the race I was pushing so hard and I knew it was okay for us but I thought he might make a mistake. I don’t know how many laps he was right behind – 0.2, 0.3, 0.3 – but I wanted to escape and finally, although this wasn’t our goal, he made a mistake.”

Quartararo finished his post-race chat saying that 70% of success in bike racing is mentality. Mick Doohan said it was 90%, so maybe the youngster still has further to go.

The inline-fours had it all their own way around Portimao’s flowing curves, but it might’ve been different if Bagnaia hadn’t had to fight his way through from the luckless fourth row of the grid, which he shared with Oliveira and Viñales.

Bagnaia – who looks more like a diligent university student than a MotoGP star – is finally coming of age. He showed exceptional pace in the early stages of last season, thanks to his stunning corner speed – but then he started losing the front and crashing, so his confidence evaporated. Ducati knew what he was doing wrong and told him to work on it over the winter.

His problem was that he wasn’t working the front tyre hard enough from the moment he left pit lane in practice and in qualifying and from the moment the lights went out on Sunday. He was too wary of the tyre when it was cold, so he didn’t push hard enough, soon enough to get it hot, so he crashed because it wasn’t hot enough. 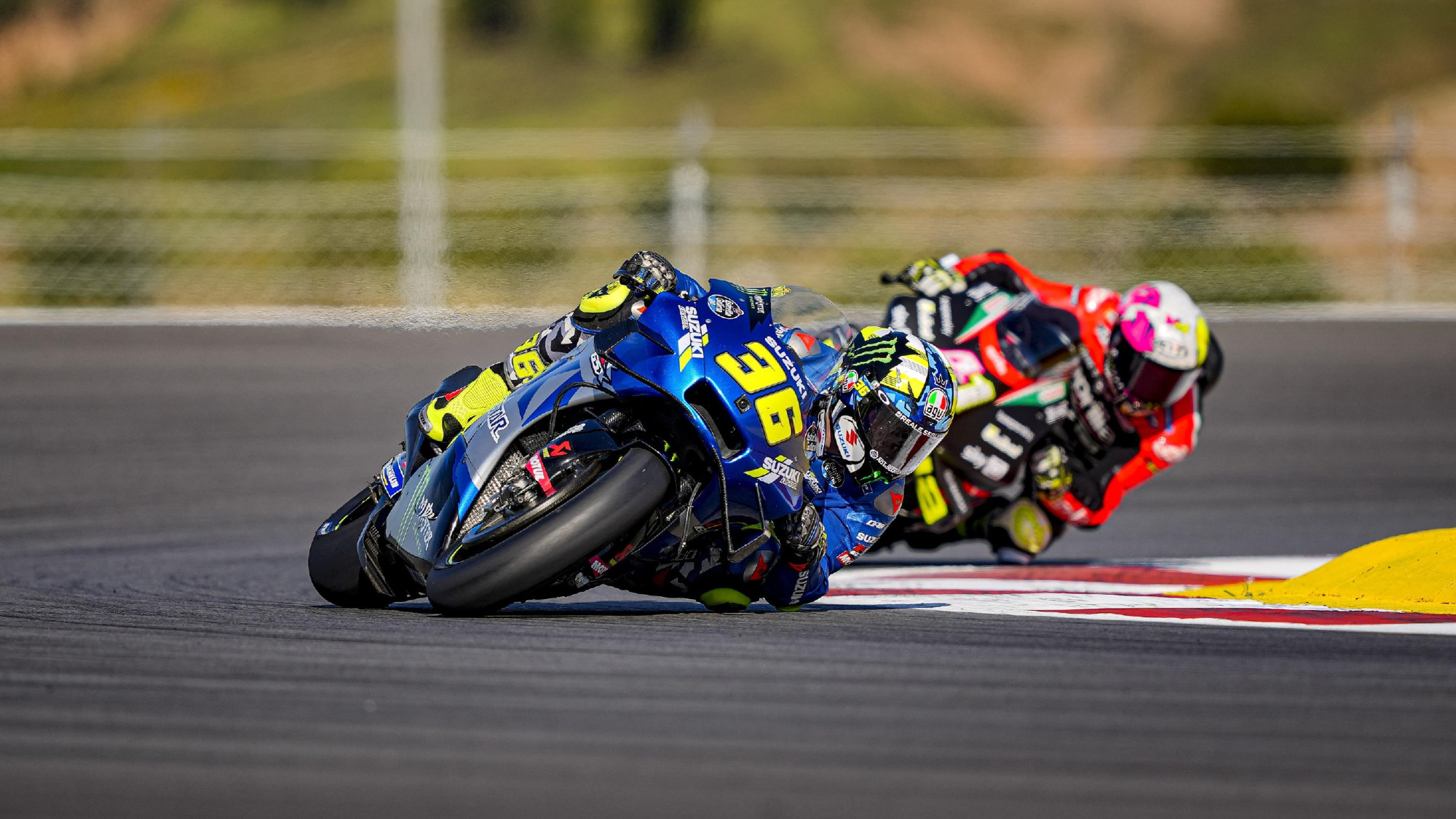 Mir heads Aleix Espargaro as he goes after the leaders

It was a huge leap of faith to change this mindset but he did it, working last winter with his VR46 academy colleagues aboard dirt trackers, minibikes and YZF-R6s. Now he nails the front tyre from the first corner – tricky but vital – and that’s made all the difference to his ability to fight during the all-important opening laps.

Bagnaia is also using a different swingarm this year. It’s a 2020 item but he never tried it last year because he was in too much of a mess to further confuse himself by trying new bits and pieces. Instead he needed to focus on himself, just like Quartararo. This swingarm gives him better feel, so he gets more information from the rear tyre, so he can feel the limit more easily and look after the rubber better.

Of course, 300 horsepower doesn’t hurt either. The Portimao straight is shorter than Losail but it’s still long enough for a Ducati to slingshot past any Suzuki or Yamaha that it might find in its way. This is one reason Ducati focuses so much on horsepower, because if the rider can pass rivals on the straight then he needs take fewer risks in the corners and can look after his tyres better.

And yet Bagnaia didn’t make all his passes with the throttle.

“I made a few overtakes in some corners where I thought it would be difficult,” said the 24-year-old Italian. “But we lost the possibility to fight for the win yesterday. The maximum for us was second and we achieved it, so we are happy.”

Jerez will be a big test for Ducati. The Desmosedici has always struggled there, so if it can do what it did at Losail and Portimao then the Bolognese brand may have found something with the GP21.

Joan Mir got to stand on the podium for the first time as world champion and exorcised the nightmare of Portimao 2020 when he qualified 20th and withdrew from the race while 19th. Those problems – an engine issue in practice and electronics settings issues throughout the weekend – are now well behind him.

Of course, if Johann Zarco hadn’t crashed out with six laps to go it would’ve been two Ducatis on the podium and no Suzuki. Zarco made a mistake exiting the high-speed uphill Turn Nine left-hander, which heads over a brow into the low-speed Turn Ten right. He shifted to first instead of second, which obviously increased engine-braking, which unsettled the rear, which overloaded the front. Zarco may have lost the championship lead but he once again proved his class.

The Portimao rollercoaster is certainly unforgiving – its up-and-down nature makes finding the correct machine balance incredibly complicated, so major set-up compromises have to be made, leaving the rider to make the difference. Over the three days the track claimed almost twice the victims of the previous race weekend at Losail, with more than double the number of crashes in the MotoGP race.