“Some people believe football is a matter of life and death,” said legendary Liverpool football manager Bill Shankly many years ago. “I am very disappointed with that attitude. I can assure you it is much, much more important than that.”

The same goes for motorcycle racing, especially if you’ve made your way to its summit and you’re fighting for the MotoGP title. You may have noticed things getting a bit ugly in the last few races at Brno and Red Bull Ring, but believe me, bike racing has always been vicious.

The starting point of this game is the joy of riding a motorcycle just as fast as it’ll go, and maybe a little bit faster. But if you want to win you’re going to have to fight for it and the higher you climb the harder you will have to fight.

Bike racing – especially MotoGP, where just a few seconds cover the top half dozen at the chequered flag – is about as close as you get to being in a war. There is so much going on, so much danger in the air, all of it happening so fast, that you’re just doing your best to pass a rival or avoid being passed, like a fighter is trying to kill or avoid being killed.

Many people don’t fully understand the levels of aggression involved; not only when riders are elbow to elbow on the racetrack but in their every thought and action from the moment they arrive at the circuit to the moment they leave.

When you watch football or rugby or boxing or cage-fighting you see the faces of players contorted in rage and hatred. You see them screaming insults, spitting venom and occasionally grinning in triumph. All of this goes on inside the helmets of bike racers; you just don’t get to see or hear it. 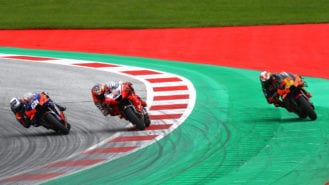 Motorcycle racing is a vicious and occasionally deadly sport, but it’s also beautiful, if you care to see the beauty.

It’s a fight and at the same time, it’s a ballet. There’s anger and ugliness in the fight, but there’s also courage, bravery and a little madness. Although I’d contend that the real world is much, much madder.

Fans of boxing say there’s beauty in two boxers dancing around the ring, using their skill and strength to beat the hell out of each other. I can’t see it myself, but I do see the beauty in bike racing.

There is joy in controlling a piece of machinery at ridiculous speeds and there is grace and magic in the way the rider’s body moves to make the motorcycle carve the desired line through corners, sometimes making the impossible possible.

And there is grandeur in the rider’s acceptance of the danger, of the risks that he or she happily faces as they do what they want with their lives. In my mind, this elevates bike racing to a higher plane, beyond most other sports.

Anyone who has raced at any level will know all about the aggression and malevolence that grips many racers. Some club racers that race for nothing more than a plastic gold trophy seem ready to die in its pursuit. So how can you even begin to imagine what’s going on in the heads of riders competing for untold riches and the biggest gong of them all?

“When you’ve been chasing a rider for several laps and he crashes right in front of you, you scream inside your helmet, “Serves him right – one less idiot to overtake!”

Riders spend each race weekend sharpening their weapons, ready for Sunday afternoon when you see them pumping themselves up for the battle, like Jack Miller punching himself in the chest as he awaits lights-out on the grid. He’s a fighter climbing into the ring.

Nicky Hayden used to talk about switching into “beast mode” on Sundays. Even in the pits it can get nasty – legendary crew chief Jeremy Burgess’s favourite race-day slogan was, “Crush the c**ts!”.

All riders have scores to settle with rivals, and they’re ready to serve up revenge, hot or cold, whenever they get the chance.

This is what Miller said after this year’s season-opening race at Jerez, where Marc Márquez overtook him while fighting back from his off-track excursion before he fell. “When Marc came past I tried to f*** with him a little bit and I think it worked.”

Maybe people fail to see the viciousness because it’s lacquered with too many layers of glitz and glamour. The riders look so neat and sweet in their multi-coloured lids and leathers, wearing the logos of respected global corporations, that surely there can’t be anything down and dirty about this sport. 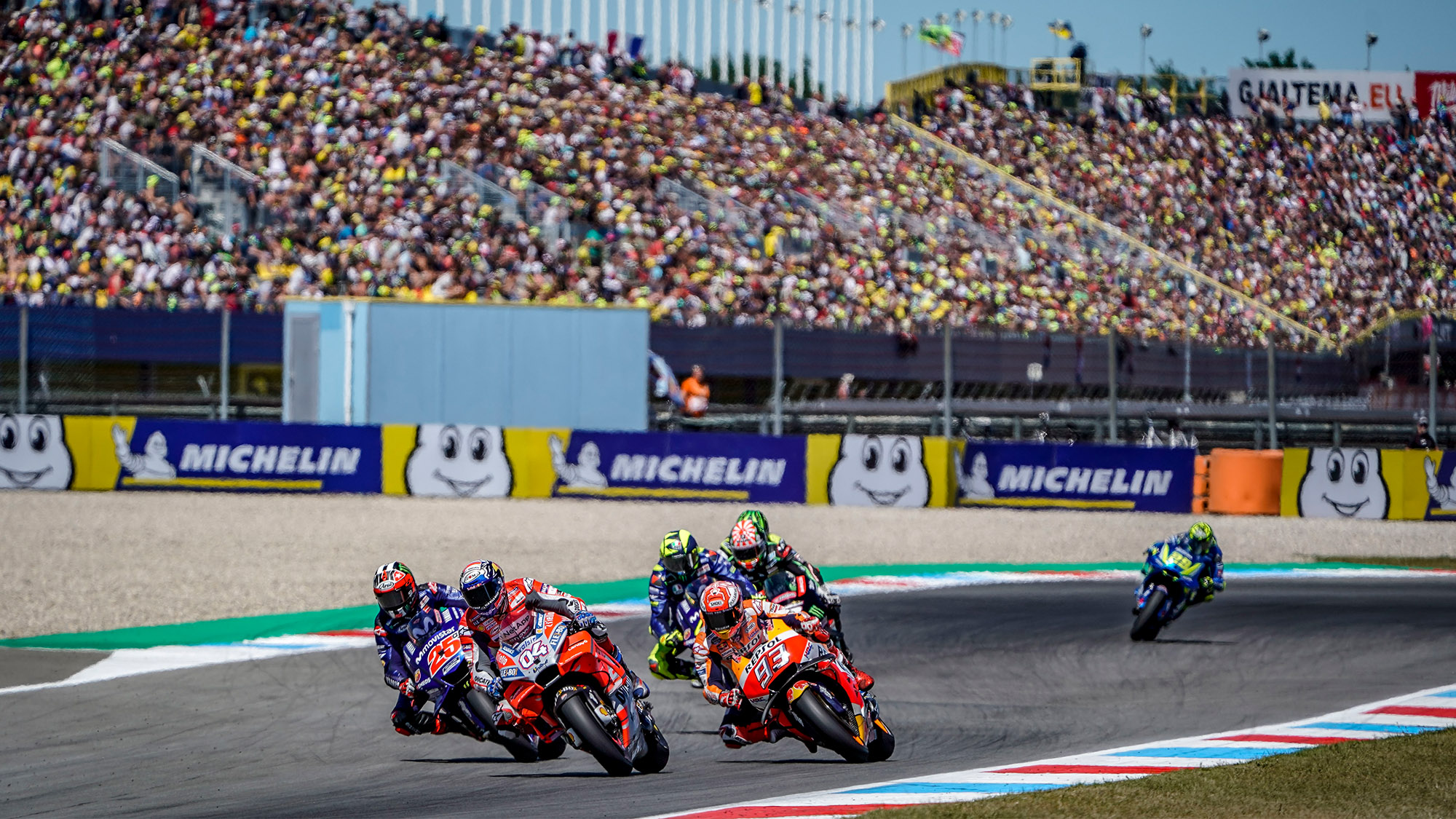 “During the race you want to kill the other riders,” said Marco Simoncelli in the summer of 2011. The Italian didn’t mean that literally; he was merely summoning up the strength of emotions that racers feel when the visor goes down and the lights go out: it’s a war out there.

No rider actually wishes death upon their rivals (well…) but perhaps just a flesh wound or two. Like those moments when you’ve been chasing a rider for several laps and he crashes right in front of you. “Yessss!” you scream inside your helmet. “Serves him right – one less idiot to overtake!”

That’s just the way it is. Of course you don’t (usually) want to crash into your rivals or hurt them. But when you pull a close move on another rider you are nearly always bullying them, showing them a wheel, hoping they’ll back off before you do. Each time you go out on track you risk your own life and the lives of others, which is why it’s important that you don’t allow your aggression to all-consume you; not only for their sake but also for your own.

“He started shouting that I’d knocked him down and I said, ‘Yeah, and next time you do that I’ll knock you down again’.”

All riders have an arsenal of dirty tricks they can deploy whenever they feel like it – either to make a pass that can’t be done the nice way or to dish out some revenge. Most you’ll never even notice because they’re committed in a way that makes them invisible to most eyes.

And be sure that all riders are basically the same – there’s not one top rider that hasn’t pulled a dodgy move or ten to make their way to the front.

There are the everyday tricks, like gently moving a rival off-line when braking into a corner or easing an opponent away from the grippy line mid-turn. Then there are the nastier manoeuvres, like shutting the throttle halfway through a corner to force someone into taking avoiding action, thus costing them time. And then there’s the really mean stuff, like running a rival onto the grass at high speed, or deliberately colliding with them, or hitting their kill switch, or shutting their throttle or punching or kicking them. It all goes on, but these days in MotoGP it isn’t easy to get away with the bigger crimes, because there are cameras everywhere.

Even legends like ‘King’ Kenny Roberts and Mick Doohan admit to getting nasty when the situation – as they saw it – demanded it. 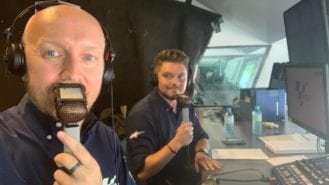 “One time going through a turn I felt this guy’s clutch lever on my right foot, so I just gassed it and flipped him off,” says Roberts, recalling a dirt-track clash. “He came over after and wanted to know why I’d knocked him down and I said, ‘Well, the reason I knocked you down is that you put your clutch lever on my foot’, so he started shouting that I’d knocked him down and I said, ‘Yeah, and next time you do that I’ll knock you down again’.”

Same with Doohan. “I wouldn’t say I’ve knocked people off the track but I’ve maybe ‘lifted’ them off the track,” says the five-time 500cc world champion. “Like when someone thinks they can go around the outside, you just pick up and modify your line. They’re already committed, so there’s only one place left to go, and that’s normally off the track. I guess it’s a good way to bring cocky people back to earth.

“Intimidation is what it’s all about. If you do that kind of stuff enough, it gets to the point where people know as soon as they see you, ‘I may as well shut down now because it’s not like he’s going to do me any favours’. Sure, there’s plenty of times I scared the hell out of people, and if they ran off the racetrack that was their problem.”

This blog started with Bill Shankly and it ends with this overused but nail-on-head quote from George Orwell’s 1945 essay The Sporting Spirit.

“Serious sport has nothing to do with fair play,” wrote the author of 1984 and Animal Farm. “It is bound up with hatred, jealousy, boastfulness, disregard of all rules and sadistic pleasure in witnessing violence: in other words it is war minus the shooting.”

And because Orwell wrote that, it must be true.