Today’s Assen may not be yesterday’s Assen but MotoGP’s oldest racetrack still affords us sights we never see anywhere else.

Best of all is the track’s unique hyper-fast final section – MotoGP’s fastest – unchanged since the circuit was halved in length back in 2006. This is Turns 12, 13, 14 and 15, or to give them their proper titles, Meeuwenmeer, Hoge Heide and Ramshoek; three names that strike fear into all but the bravest motorcycle racers.

Seven-times MotoGP king Valentino Rossi reckons Hoge Heide is the most difficult corner of them all. “You change direction with no throttle, so the bike is very heavy,” he says. “Then you fly over the camber and brake for the fast left.”

Yesterday Fabio Quartararo made his winning move on Pecco Bagnaia at the preceding Meeuwenmeer right-hander, a narrow 150mph sweeper, which is like trying to get a camel through the eye of a needle. Bagnaia got poor drive out of Turn 11, but Quartararo still required huge confidence and courage to dive under the Ducati into Meeuwenmeer.

“I tried many times coming out of Turn 12 – I hit the outside of his bike once,” said Quartararo. “Then I saw I had the potential to go inside of him at 12. I never expected to overtake there but it was the perfect spot.”

This despite a very scary moment at the same corner a few laps earlier, when he nearly tailgated the Ducati and got into a huge headshake, at around 170mph, which lasted all the way into Ramshoek.

Bagnaia struggled through Meeuwenmeer, Hoge Heide and Ramshoek every lap, revealing later that he was losing up to five tenths there. The Ducati always struggles through this section, because all that downforce aero makes the bike very heavy to change direction into and out of very fast corners.

In race bike engineering you always win some and lose some. Ducati’s chief engineer Gigi Dall’Igna knows this better than most. He understands that while the Desmosedici will lose several tenths through that corner sequence it will regain that time and more exiting the final chicane and turn five onto the back straight, when its shapeshifter is engaged to squat the rear end.

The desmodromic V4 makes more horsepower than any other bike on the grid, but it’s not brute power that makes the real difference accelerating out of slow corners. All MotoGP bikes have enough grunt to spin the rear tyre and lift the front wheel in the first three or four gears, so what makes the difference is traction and anti-wheelie.

Most of the factories now use shapeshifters to lower the rear end, which transforms a MotoGP machine into a drag bike, but Ducati’s is the most effective, allowing its riders to unleash all that desmo power to huge effect. Assen’s start/finish straight isn’t very long, so really it shouldn’t be possible to zap a rival there, but the Ducatis were doing it every lap. That’s a wonderful thing for any rider because it’s overtaking for free – no stress for the rider or the rear tyre.

And of course it’s a double whammy, because having that ability to overtake so easily forces rivals to stress themselves and their tyres in their efforts to get back in front. Third-placed Joan Mir got so frustrated with Jack Miller’s Ducati while he was fighting his way through from another lowly grid position that he barged past the Aussie at the turn five hairpin.

“Some of my overtakes were on the limit, so I must say sorry to those guys and I hope they understand,” said the world champion, who has yet to climb higher than the third step of the podium in his title defence. “Jack will be angry. I made a block pass on him and I don’t like to make overtakes like that, but he’s so fast on the straight and brakes so late.” 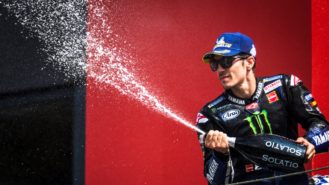 The battle for the 2021 MotoGP isn’t yet at half-distance – Assen was race nine of a planned 19 races – and in fact no one will know when the championship does reach half-distance because the global pandemic still looms over the calendar, especially October’s four flyaway races

Quartararo goes into the five-week mid-season break with a 34-point lead over Pramac Ducati’s Johann Zarco, with Bagnaia a further 13 points back. That’s a decent advantage, but Quartararo will spend much of his holidays looking nervously at the calendar and its next two races at Austria’s Red Bull Ring: heaven for Ducati, hell for Yamaha.

If Zarco, Bagnaia and Miller can twice beat him up in Austria he will head to the British GP at Silverstone with his points lead in tatters.

The 22-year-old Frenchman knows he needs more straight-line speed from his M1 if he’s to fend off the Ducatis, especially with plenty of fast tracks coming up: Red Bull Ring, Silverstone, Aragon, COTA, Buriram, Phillip Island and Sepang.

After yesterday’s race he told us he has some ideas to improve his M1’s speed but he wouldn’t tell us what.

“I have one thing clear in my mind – but I will not say what – that I’ve talked to Yamaha about,” he said mysteriously. “I think our bike can be faster but we are missing this one thing. If we can fix this thing we will improve our top speed a bit, so we are trying but it’s not easy because it’s quite a big thing.”