The latest MotoGP mutterings from the washed-out British round, at Silverstone 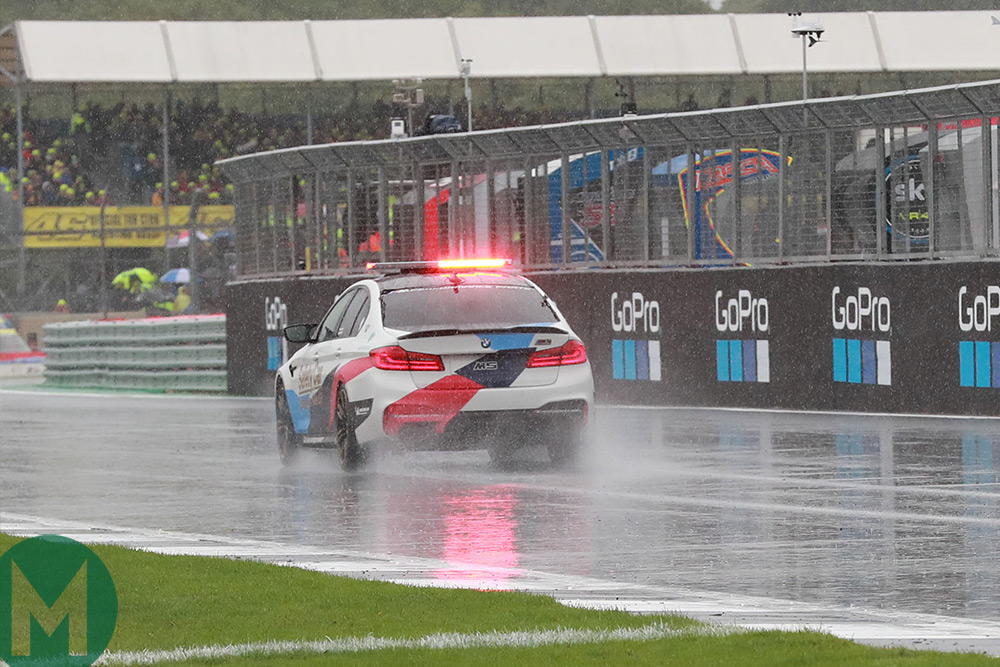 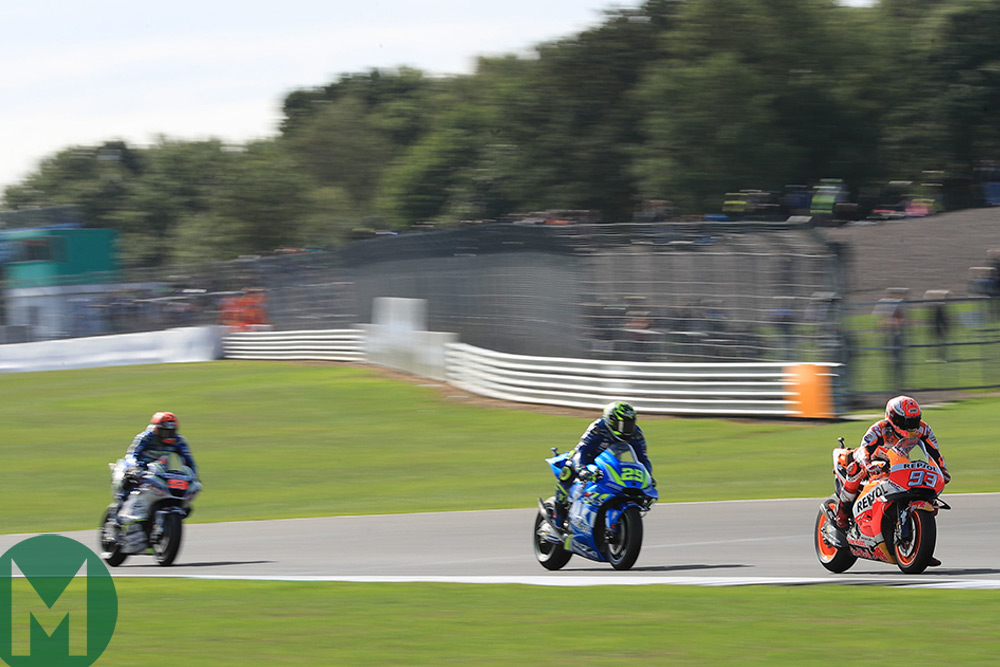 Are bumps such a bad thing?

Throughout Friday and on Saturday morning, the British Grand Prix ran perfectly smoothly. Well, apart from the bumps.

The first inklings that things weren’t quite right with the new surface came after FP1 and FP2. The combination of cold wind, bumps and high-speed corners had a few riders looking a whiter shade of pale.

“It’s a shame because Silverstone is a very nice track with some very fast corners,” said Aprilia’s Aleix Espargaro. “But now we are trying to avoid crashing on the bumps instead of focus on being fast. Our bike is super-unstable, plus we’re not putting enough temperature into the front tyre, so it’s a bit scary.

“This isn’t easy to fix because you want to make the bike longer to gain stability, but also we want to raise the bike to put more temperature in the tyres [by increasing load transfer during acceleration and braking]. We did this in FP2 and increased tyre temperature by a few degrees, but now the bike is worse on the bumps, so it’s a very difficult compromise.”

Diminutive Repsol Honda rider Dani Pedrosa had a more challenging time than most, because he’s not heavy enough to get heat into the tyres and not big enough to wrestle the bike over the bumps. And he can’t fix the problem with electronics.

Valentino Rossi, who ended FP1 a close second to Movistar Yamaha team-mate Maverick Viñales, had his own way of dealing with the bumps.

“From what I understand during my career the secret to riding a bumpy track is to not care,” said the 39-year-old who was hoping to end Yamaha’s 21-race victory drought. “If you start trying to ride in a different way or you don’t attack the bumps or you try to go around them, then everything gets worse. It’s a bit like motocross: if you are scared of the bumps it’s worse, so you have to go and hope that everything is OK. This is the best way!”

The bumps were bad. Most riders thought they were very bad, but this is partly a consequence of many top tracks getting smoother and smoother, so when riders and bikes come up against a bumpy surface, the negatives are magnified. I have to admit I enjoy watching riders deal with the bumps, muscling their bikes around as the suspension loads and unloads across the peaks and troughs. But that may just be me…

Rossi: “The road is long”

Viñales had the best race pace in the dry at Silverstone, for two reasons: Silverstone is a chassis track, not a horsepower/electronics track, because it’s dominated by fast corners, where maintaining momentum, especially across the bumps, is paramount.

Both Viñales and Rossi also benefitted from work done during a Misano test the previous weekend. “First, this track is friendlier to our M1,” said Rossi. “Also, in FP2 we tried something that Maverick tried at Misano, which was positive. We are working on the electronics in acceleration, and it looks like we’ve made a step forward because our engine is a bit smoother from the bottom, which is important.”

The Movistar team did not have new electronics expert Michele Gadda at Silverstone because Gadda is contracted to the Pata WSB team. Currently Gadda is in a middle of a tug of love between the two outfits.

“Unfortunately Michele isn’t here with us, because he is busy with the superbike team,” added Rossi. “But we have worked together in recent weeks and it looks like we’re starting to move in the right direction with the electronics. The road is long and there’s a lot of work to do, but in FP2 I felt something better, Maverick too, so it’s positive.”

Expect Yamaha to come out swinging at Misano next week: the factory team has tested there and the factory will be working harder than ever to ensure it doesn’t match its longest victory drought since the 1990s.

“A racer’s helmet is a diamond!”

Silverstone’s annual Day of Champions charity event raised a record £290,000, towards improving health in impoverished areas of Africa. The onstage memorabilia auction by Two Wheels For Life raised £103,000 alone. Inevitably, anything to do with Rossi earned the most money, topping out at £3000 for the opportunity to take a selfie with the nine-time world champion.

Johann Zarco was eloquent in his admiration for the event. “I’m impressed by the fans who came to the Day of Champions,” said the Frenchman. “It reminds me of the days when I wasn’t a racer – a top rider’s leathers or helmet look like a diamond to a race fan! These things are sold for a lot of money at the action, which fulfils the dreams of the fans, while at the same time helping an important charity. I think we should do the Day of Champions at other races as well.” 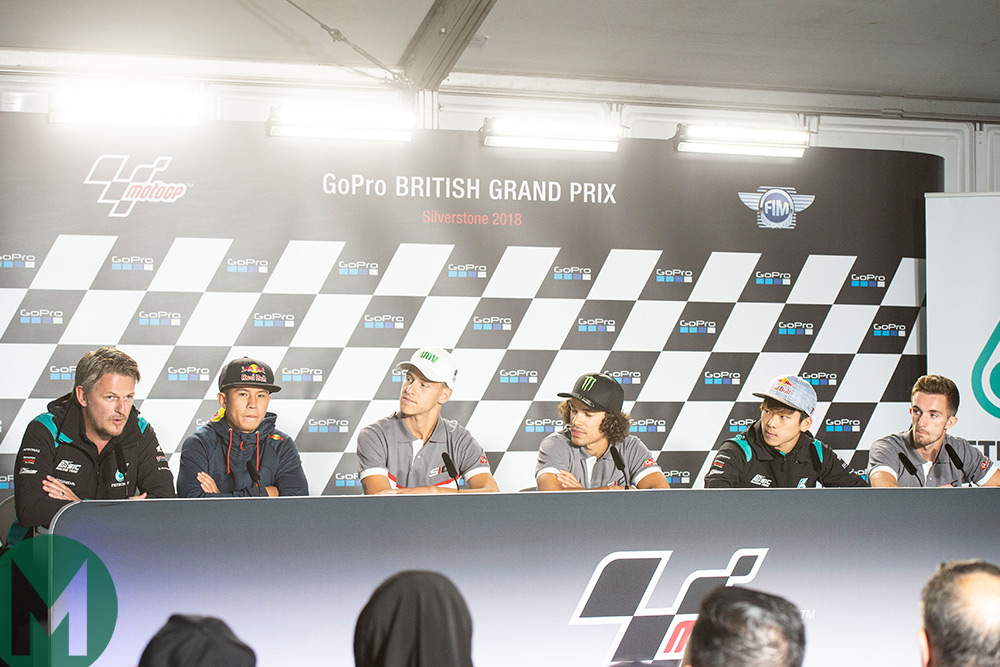 The worst-kept secret of 2018 was finally put to rest at Silverstone when the Petronas Yamaha Sepang Racing Team was officially announced on Friday evening. This is significant news because South East Asia is the only region of the world where motorcycling is really booming.

Morbidelli will get A-spec YZR-M1s, which means 2019 bikes, essentially identical to those to be ridden by Rossi and Viñales, while Quartararo will ride his rookie season on B-spec M1s, basically this year’s bikes. The plan is for the 23-year-old Italian and 19-year-old Frenchman to graduate to the factory team

“At the right time, when our factory team has the places and these riders have the potential, that’s definitely the intention,” said Yamaha racing director Lin Jarvis.

New-for-2019 MotoGP technical rules were confirmed at Silverstone. Electronics, as usual, was the big talking point, as MotoGP technical staff work to ensure that all the factories are using the exact-same equipment, with no chance of fiddling the zeroes and ones.

From next year all MotoGP bikes will be restricted to the same Magneti Marelli IMU (inertial platform), a small black box of gyroscopes and accelerometers that help manage the various rider controls by measuring yaw, pitch and lean to tell the ECU the position of the motorcycle in relation to the ground.

The plan for the spec IMU was revealed earlier this year to prevent teams and factories cheating via clever electronics tricks. On Thursday, MotoGP director of technology Corrado Cecchinelli announced another new regulation, also aimed at preventing cheating.

“As well as the unified IMU, which will stop people doing things that aren’t allowed, we will also restrict the layout of the CAN (Controller Area Network) connections on all bikes,” said the former Ducati MotoGP engineer who said he has no proof that any of the teams are actually cheating.

A CAN allows the various microcontrollers on a MotoGP bike to communicate with the ECU. MotoGP bikes are allowed four CAN lines: two are used by the IMU box (which is a doubled-up aero-type system with two IMUs, in case one fails), the third is used by the team for other lines and the third is shared with the Dorna onboard module, which sends all the bike info you see on television.

MotoGP technical director Danny Aldridge also confirmed next year’s revised aerodynamics regulations, which tighten up the current rules but won’t make much difference to the look of the bikes.

Teams will only be allowed two different bodywork designs all year. They are allowed two designs this year, but they can remove sections from these to create multiple different options. This won’t be allowed from 2019. All aero will be checked in an official jig, rather like the metal frames used by airlines to check the size of cabin baggage.

Expect most factories to homologate both their aero options early in the season, so they can switch back and forth as required.