… a double-pronged attack. Honda and Ducati are the current kings of MotoGP and there’s little doubt their battle for the 2019 MotoGP crown will be the toughest ever, because that’s how racing works. 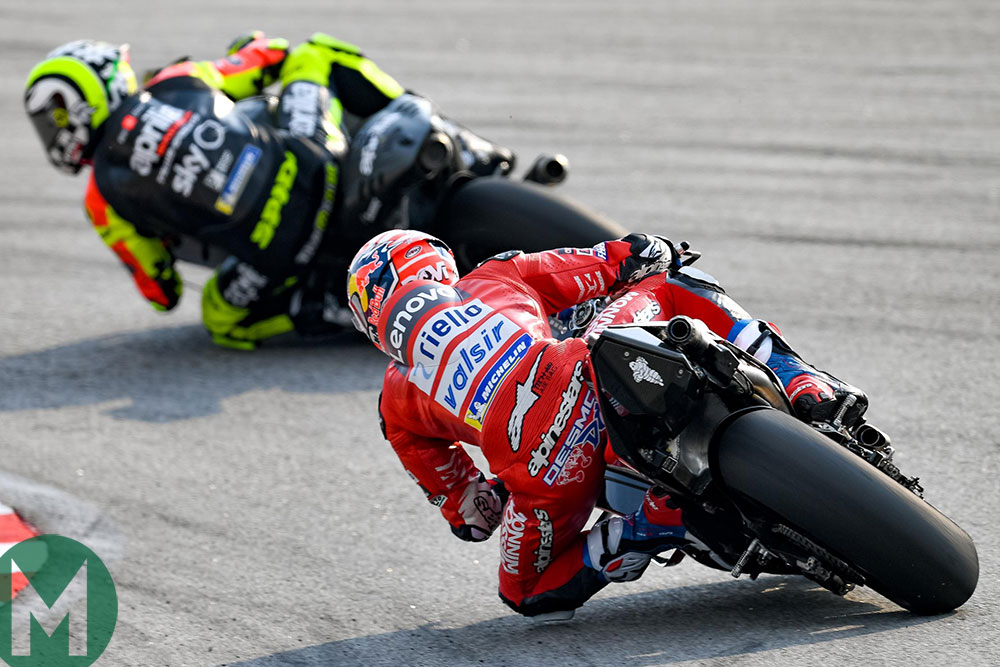 It’s a two-pronged attack: Honda attacking from one angle, Ducati from another.

We all know the Ducati’s big advantage: straight-line speed. At 14 of last year’s 18 MotoGP rounds a Desmosedici was fastest on top speed, while the RC213V was quickest at four races and Yamaha at one.

We can thank Ducati-turned-Honda rider Jorge Lorenzo for confirming the Desmosedici’s weak points. Last year he told me that he had he had to steer the GP18 “like a boat”, using the rear brake to get the bike pointing the right way through the corner.

And after his first outings on the RC213V last November Lorenzo told us that “the bike’s strongest qualities are agility and corner entry”.

So there you have it: Honda needs more top-speed for 2019; Ducati needs better turning and agility.

How are the men from Asaka and Bologna going to achieve these goals?

HRC is working harder than ever to squeeze more power and torque from its RC213V.

“I dream of seeing this happen,” grins hugely experienced HRC engineer Shinichi Kokubu as he mimes with his hands an RC213V drafting past a Ducati. “From Honda’s first TT, Soichiro Honda always said that his engineers must make more power to give our riders a better chance.”

It might seem a surprise that HRC thinks it can still find significantly more power from the RC213V engine, which is now in its seventh season. But in fact this makes perfect sense, because the 90-degree V4 underwent major redesigns in 2016 and 2017, when HRC reversed the direction of crankshaft direction and then switched to a big-bang firing configuration; to make the engine easier to use in the age of lower-tech electronic controls. 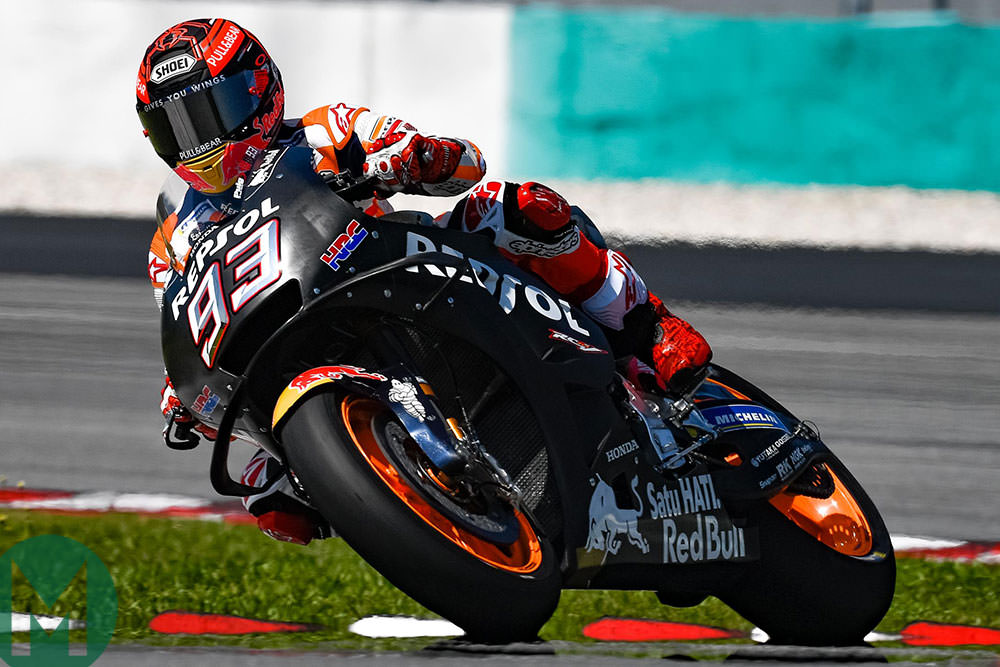 Therefore last year was the first that HRC was able to focus on increasing outright performance. HRC’s Tetsuhiro Kuwata said the 2018 improvement was “much bigger” than in many years. At Aragón in September, Marc Márquez’s top-speed deficit against the fastest Ducati was just 0.7mph/1.2kmh, significantly down from 4kmh/2.5mph in 2017.

At last year’s post-season tests and at Sepang this week it was obvious that HRC is working very hard on intake/exhaust: the more oxygen you can force into the engine, the better the burn. Engineers have enlarged the air intakes and airbox to the extent that they have had to redesign the motorcycle around that, moving the steering damper beneath the fuel tank cover to make room and shifting various electronics units from under to fuel tank cover into small carbon-fibre boxes attached to each side of the frame.

“The main difference this year is the engine,” says Márquez. “We are looking for more top power for more top speed. But of course as soon as you have more power it becomes more difficult to manage in the corners, so we trying to better manage the torque in the corners.”

HRC crew chief Jeremy Burgess – once chief engineer to Valentino Rossi, Mick Doohan and Wayne Gardner – used to joke that top speed is less important than people think because you only use it once a lap. Burgess is right, to an extent, but as MotoGP gets closer and overtaking becomes more difficult, a few miles an hour extra can make a critical difference in racing.

And there’s a further significance to HRC’s quest for Ducati-beating top speed. Chassis and suspension engineers have been working hard in recent months to somehow reduce stress on the front tyre. The RC213V and Márquez stress the front tyre more than anyone or anything, which forces them to use the hardest compound front slick, which can cause problems, and even crashes, in the early laps and especially when track temperatures are cool. The aim of the chassis work in this area is to reduce stress on the tyre, so that RC213V riders can sometimes race the medium tyre, which will give them an advantage at some tracks.

This is all well and good, but a faster motorcycle doesn’t only make you faster on the straights, it can also reduce stress on the front tyre because the rider doesn’t need to brake so insanely late or push to such extremes during corner entry to compensate for however metres he has lost to the Ducati in a straight line.

If HRC is successful in these areas, Márquez and other RC213V riders should be more competitive than ever.

And what about Ducati? How can Gigi Dall’Igna and his engineers reduce the Desmosedici’s disadvantages in the corner-entry and mid-corner phases? Perhaps a fully developed version of Ducati’s so-called FUBAR torque arm will help solve the first problem.

The FUBAR squats the rear end when the rider brakes to reduce forward pitch and therefore increase rear-tyre contact, which allows the rider to use more rear brake to help stop the bike; a vital advantage with the Michelins, which lack the front grip of the Bridgestones. All this should allow the rider to commence the cornering process with the bike in a better place.

The FUBAR was first tested by the factory’s full-time MotoGP riders at Jerez last November, when both Petrucci and Miller rode their fastest laps with the FUBAR fitted, even though the gizmo was in the earliest stages of its development. At Sepang on Friday Petrucci tried the FUBAR again, but he didn’t use it during his best lap, the fastest-ever lap of the Malaysian circuit.

“It gives some positives and some negatives, but it wasn’t as good for us here as it was at Jerez better, so we will have to try it again,” said Petrucci.

Ducati’s mid-corner turning problem will most likely be more difficult to fix; after all the factory has been working on this kind of thing for years, gradually reducing its disadvantage in this vital area. Dall’Igna believes that chassis flex and centre of mass are crucial in helping the bike to turn. At Sepang all three GP19 riders – Andrea Dovizioso, Danilo Petrucci and Jack Miller – had the latest frames which eschew the carbon-fibre inserts that were used by some riders last season. The frames hardly look different, but there will be important differences in stiffness in certain places to help the bike around the corner.

Dovizioso did try another new chassis at Sepang, designed to get him through the corners quicker – but without luck. “In the middle of the corners we still have to improve more,” he said.

Petrucci is trying to improve his mid-corner speed by following Dovizioso, a factory Ducati rider since 2013. “I followed Andrea and understood many, many things,” added Petrucci. “Of course, it’s easy to talk about riding, but Andrea simply said to me: to turn the bike you have to wait before you open the throttle, but that’s not easy when you are chasing tenths of a second, because when you try to go quicker you try to brake one metre later and open the throttle one metre earlier.”

More: The FUBAR Ducati and other Jerez stories 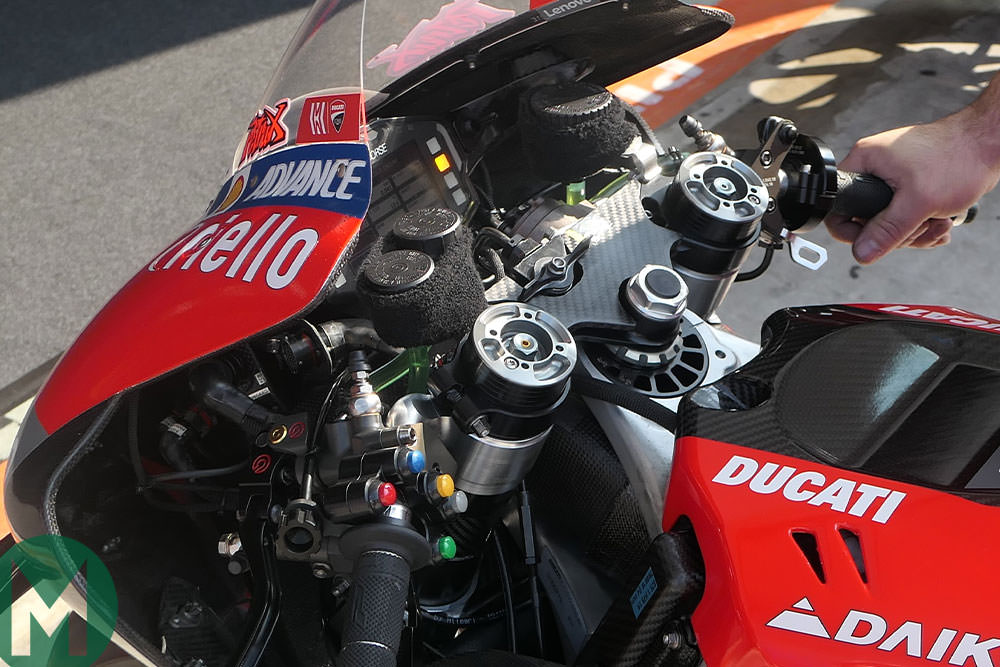 It wouldn’t be a proper preseason MotoGP test if Ducati’s Gigi Dall Igna didn’t fire one of his beloved “tech bombshell” into pit lane. First it was the wings, then the salad box, then last November the FUBAR torque arm.

At Sepang this week he did it again. Close inspection of Ducati’s latest Desmosedici showed a new addition to the front end of the bike – a large wingnut type-device atop the upper triple clamp, connected to something via a hydraulic cable.

The favourite theory among Sepang pitlane glitterati was that this gizmo is to control a holeshot hook-up device, already popular in motocross and also in drag racing. And who knows, perhaps this was the idea of Andrea ‘I’d rather be a professional motocross rider’ Dovizioso, who spends much of his downtime watching/attending motocross races.

The holeshot hook-up device locks or partially locks the rear shock, so when the rider opens the throttle at the start of the race all engine power is used to move the motorcycle forward, with none of the energy consumed in compressing the suspension, which has the knock-on effect of making the bike more likely to wheelie. And since MotoGP’s unified anti-wheelie software is very basic, the hook-up device is doubly efficient. The system should also make the bike more stable in the run to the first corner, because it won’t get so upset by each gearshift. The device disengages when the rider hits the brakes, but it’s unsure how. All suspension controls must be mechanical or fluid, because electronics are banned in suspension systems.

Ducati riders made plenty of practice starts at Sepang and they all looked mightily impressive. A fast start is more important than ever in MotoGP, because the bikes are now so equal that overtaking gets more and more difficult, so if you can get to the first corner in front of everyone, you’ve made a huge step forward. 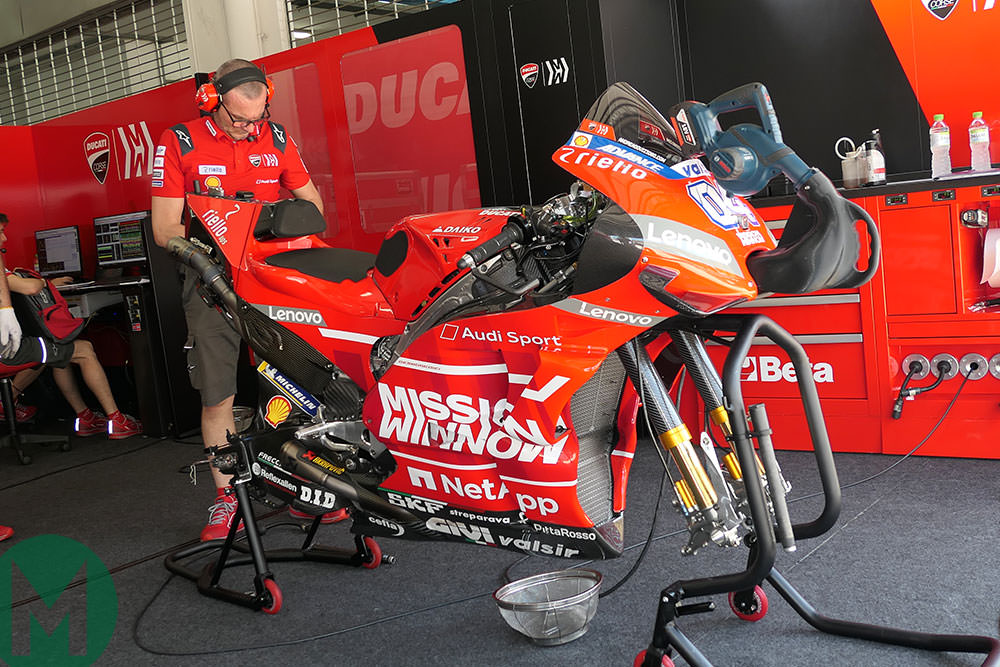 How long before Ducati’s latest tricks get copied?

Whenever Ducati rolled a GP19 onto pit lane at Sepang there was a migration of Honda, Suzuki and Yamaha engineers from their garages, anxious to check out Gigi Dall’Igna’s latest ‘tech bombshell’. This is nothing new – it also happened with the wings, the torque arm and so on.

What is significant about most of these devices are that they are effectively bolt-on fitments and therefore easily copied, just like the wings and aero sets.

If the FUBAR continues to get better and gives Ducati riders an advantage on the brakes, surely it is inevitable that the other factories will copy the design, which was borrowed from race bikes of the 1930s, 1960s and 1970s, which used similar torque arms and parallelograms for various reasons.

It’s the same deal with Ducati’s holeshot hook-up gizmo. If rival factories aren’t already working on their own designs they certainly will be if all the GP19s win the race to the first corner in Qatar on March 10.