What’s the story behind the fuel-tank wings appearing on MotoGP bikes? It’s all about the extra grip offered by the latest aerodynamics 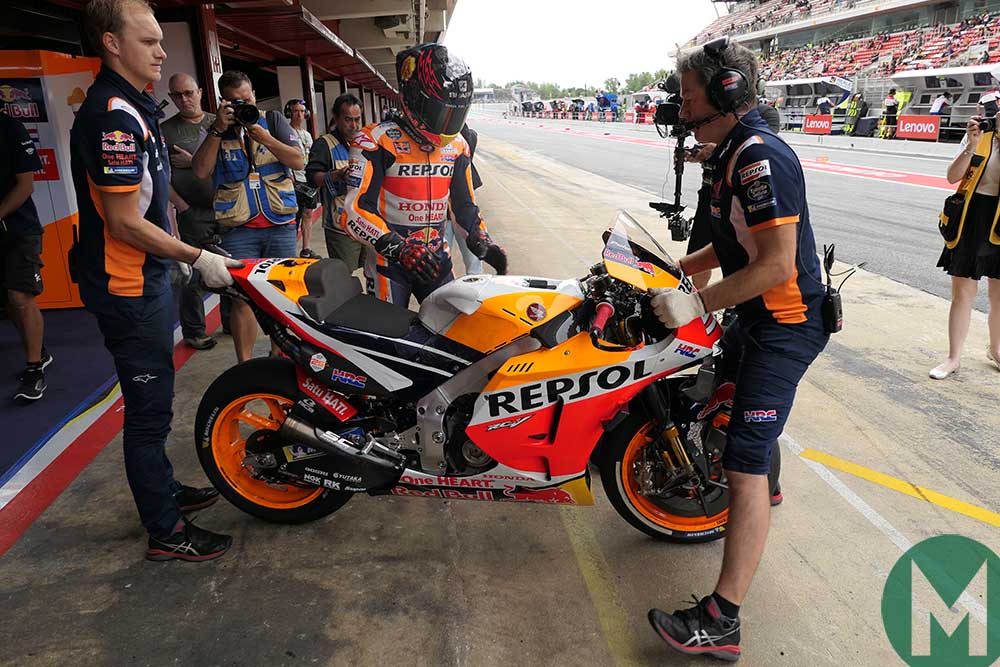 MotoGP riders pull 1.7g on the brakes, which sounds like nothing when Formula 1 cars pull 5g. But an F1 driver is strapped into his car with a seven-point harness, similar to those used in fighter jets. A MotoGP rider holds on by curling his hands and fingers around the handlebar grips.

In fact, this isn’t enough, so riders use their thighs, feet and backsides to help grip the bike, by gripping the tank like a vice with their knees, digging their feet into the footpegs, (at least until they dangle a leg) and jamming their backside against the seat hump; basically trying to wedge themselves into the bike.

It’s a precarious grip, however, because the rider’s only proper grip is with his (or her) hands, which can work like a pivot, so if he’s not careful he will get catapulted over the handlebars when he hits the brakes.

I vaguely remember clattering down on the top of the screen, looking at Doohan’s number-one plate upside down

I know this because I’ve been that idiot, launching myself over the screen when I tested Mick Doohan’s Honda NSR500 at Catalunya, after the 1995 Grand Prix of Europe. Usually teams equipped their bikes with steel discs for journalists unaccustomed to the brick-wall-effect of carbon brakes. But sometimes they left the carbons in place.

That day Doohan’s crew chief Jeremy Burgess and his mechanics fitted carbons. I’m sure I could hear their sniggers as Alex Briggs pushed me off down pit lane.

Riding 500s was always a brain-frazzling experience – your brain literally struggling to keep up as you arrived at the next corner seemingly before you’d left the last.

After a few laps – tyres warmish, brakes warmish – I arrived at Turn Nine, the corner before the site of Sunday’s Catalan GP disaster. I braked hard, the front forks compressed, the rear shock extended and my backside came off the seat like I’d hit the ejector button. Then my feet came off the footpegs. To my horror I was being hurled forward, over the handlebars, pivoting over my wrists. I was totally out of control, doing maybe 120mph.

These situations are always a mixture of high-speed chaos and slow-motion terror. I vaguely remember clattering down on the top of the screen, looking at Doohan’s number-one plate upside down; imagining the years of abuse I’d have to endure from JB, the crew and the rest of the paddock: the moron that ejected himself from Doohan’s world championship-winning NSR.

I had no control of the brakes, because I was pretty much upside down on the bike. I have no idea how I didn’t crash, but I didn’t.

The reason I tell this story is to give everyday motorcycle riders some idea of the violent forces involved when MotoGP riders hit the brakes hard, which during Sunday’s race was about 170 times in 40 minutes.

When I nearly crashed Doohan’s bike braking g-force was 1.5g. Now the figure is 1.7g and rising. A fast and talented road rider making a very spirited stop on a sports bike pulls around 0.9g, so MotoGP is close to double that force.

This is one reason why small wings (or lips, or flares, or whatever you want to call them) are sprouting out of fuel-tank covers up and down MotoGP pit lane. The idea is to deepen the tank’s knee cut-outs, so the rider can better grip the bike when he brakes. 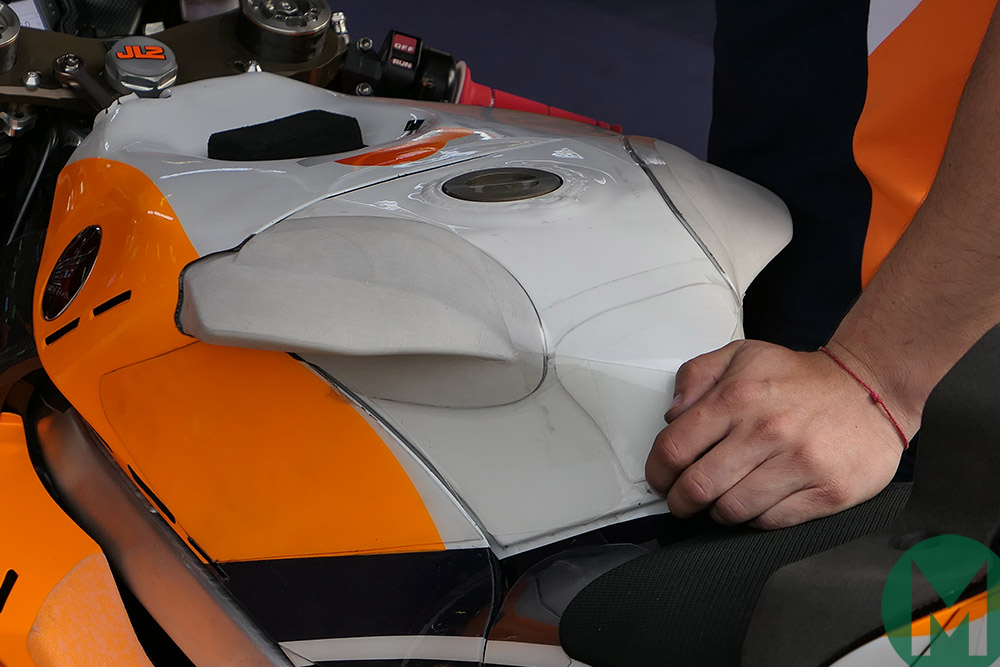 Jorge Lorenzo has the biggest tank flares – 3D printed at HRC when he visited Japan after Mugello – which isn’t a surprise, because Lorenzo who started the fashion when he was at Ducati. He wanted a tank that he could grip more tightly and protuberances above his thighs that prevented him being thrown forward.

“The limit for g-force on the brakes is tyre grip,” explains Brembo brake technician Andrea Pellegrini. “The new aerodynamics increase downforce on the front tyre during braking, which gives the tyre more grip, which means the riders can brake later and harder.”

Braking is now the most physically demanding aspect of riding a MotoGP bike. Let’s take Cal Crutchlow as an example. The Briton weighs 66 kilos and his riding gear weighs another 11 kilos or so. That’s 77 kilos. Let’s assume he takes 60 percent of that load through his wrists each time he brakes, with the rest taken by his thighs, feet and backside. That means his wrists take an 80 kilo load on the brakes. At Catalunya there are at least seven major braking points, so during Sunday’s race Crutchlow bench-pressed 80 kilos about 170 times; as well as having to cope with the cornering and acceleration g-forces.

“That’s why our heart rates go up so much, because we hold our breath in the braking zone, like we’re doing a bench press,” says Crutchlow. “You are as tense as you can possibly be and holding your breath for three, four or five seconds, then you exhale as you make the transition into the corner, but the next corner might be only three or four seconds away, so you have to do the same thing all over again, then again and again.

“You tense your whole body when you’re on the brakes and I have no idea when I start to breathe again but I know I must. Here at Catalunya you brake into Turn One and I don’t think you start breathing again until the exit of Turn Two, because when you change direction between one and two you’re as tense as you are when you’re braking.”

Both Crutchlow and LCR team-mate Takaaki Nakagami have cut-outs in their fuel-tank covers, but the most exaggerated (after Lorenzo’s) are those used by Jack Miller and some other Ducati riders. 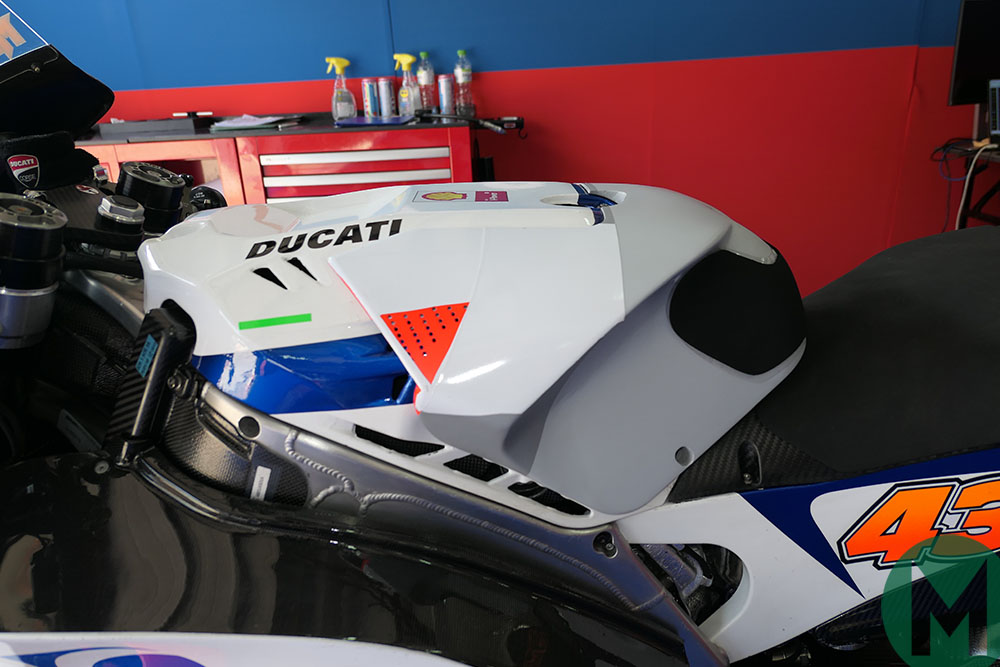 “When you’re braking you use your feet and knees, which is why we’ve got the lips on our fuel tanks now, just to hook your knees in and under,” says the Australian. “When you brake you push into the footpegs with your feet and you push your knees into the fuel tank and use that as a locking position for your lower back. Then your arms take the weight of your upper body, rather than the weight of your whole body. Here at Catalunya you especially do that at Turn Ten, where you jam your knees under the lips to take as much weight off your hands as possible.”

Lorenzo’s new tank flares certainly gave him wings on Sunday, at least until he locked the front at Turn Ten on the second lap. “I felt very good on the bike – I was recovering a lot in braking,” he said, which is something he hadn’t said at any of the first six races of 2019.

The big question is this: will the three-time MotoGP king’s new parts turn him into a winner on the RC213V? He may have yet more upgrades at Assen – possibly including a new fairing designed to allow his knees to take more of the braking forces – but riders use brakes less at the sinuous Dutch track than at any other MotoGP circuit. Brno and Red Bull Ring – both very demanding on brakes – could be where Lorenzo makes his breakthrough.