The 2020 MotoGP world championship is so tight – four points covering the top five riders at the halfway point – that come November’s Portimao season finale, Fabio Quartararo may lament the three points he lost at Misano on Sunday.

Quartararo spent the last few laps in a dogfight with Joan Mir and Pol Espargaró for second place, during which he exceeded track limits too many times, which got him a long-lap penalty just before the last lap. He didn’t do the long lap, so at the finish he was demoted one position, from third to fourth. That knocked him off the podium and he was far from happy.

Quartararo says he never saw the warnings. Teams association IRTA has confirmed that the warnings were sent, so either his dash didn’t display them or he didn’t see them. This is easily done in the heat of battle and is one reason why most riders are keen to have audio messages as well as dash messages.

There is always more hassle with track limits at Misano than anywhere else. There are two big reasons for this.

The track runs the wrong way around and most of the corners are too tight and too angular, which forces riders to flirt with track limits if they want to be fast.

The circuit direction was changed before MotoGP returned to the track in 2007 after a 13-year absence following Wayne Rainey’s career-ending accident at Turn One (now Turn 16) during the 1993 Italian GP. MotoGP rights-holder Dorna vowed never to return to the circuit, but a return became commercially irresistible as Valentino Rossi mania gripped Italy, so Dorna’s promise was craftily swerved by reversing circuit direction.

Misano was never a great racetrack, but it was better when it ran anti-clockwise. Ironically, Rainey’s favourite sequence of corners in grand prix racing were the three left-handers, taken at ever-increasing speed, that led onto the back straight.

There were few better places to watch a 500 GP bike than right there, where you’d witness Rainey, Kevin Schwantz, Mick Doohan and the rest hooking gears and spinning the rear tyre, head under the bubble as they sped through the final left at around 150mph.

That sequence is now the three right-handers, taken at ever-decreasing speed, that lead into the Turn 14 hairpin.

Misano’s current layout keeps Race Direction busier than ever, with many more track-limits offences than at other venues. Nowadays officials are helped at all MotoGP circuits by electronic spies – high-definition cameras placed wherever needed that automatically register each and every infringement, so Race Direction doesn’t only rely on the TV footage we see.

But why is this all necessary? MotoGP didn’t need all this fuss when race tracks were bordered by gravel and grass. In those days when a rider made a mistake he paid a different kind of price – he either crashed or he lost 20 seconds finding his way back onto the track. No further penalty required.

But race tracks are no longer surrounded by gravel and grass. More than a decade ago Formula 1 demanded gravel traps be replaced by asphalt runoff at many corners because it was safer. When an F1 car left the track at 150mph and bounced through the gravel it would barely slow down by the time it hit the barrier. Asphalt runoff gives the cars grip, so they can use the brakes to scrub off speed.

Asphalt runoff was greeted with horror by many bike racers because a strip of asphalt is a lot more solid than a bed of gravel! In fact, in most situations asphalt is safer because gravel traps cause riders to cartwheel, which is when bones get broken. 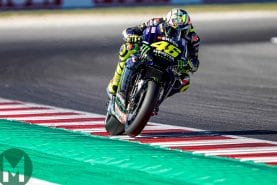 Some people hate MotoGP’s rules over track-limits, but to understand why they are there we need to look at racing safety over the years Rossi at Misano, an example of how…

Thus – like it or not – asphalt runoff is now the default, effectively widening the racetrack beyond the kerbs (which have long been considered part of the track). Inevitably, riders started using the asphalt to widen their line, when they made a mistake, when they wanted to attack another rider or simply to find a faster line.

Hence the introduction of the no-go green zone and penalties for riders who habitually use the green and the asphalt runoff, whether by metres or millimetres.

But why bother penalising a rider who’s just snatching a few extra millimetres here and there every other lap? Because racing in all classes is much, much closer than it’s ever been, so every hundredth of a second counts. It, therefore, makes sense that someone illegally gaining a few hundredths should be punished.

In fact, there is a much better way to solve this problem: design better circuits. How much track-limits fuss is there at Phillip Island? Or Mugello? Or Termas de Rio Hondo? Or Assen? Or Silverstone? Very little, sometimes none.

“One of the main reasons we have so many issues with track limits at some circuits is modern race track design,” says Jarno Zaffelli, designer of Termas de Rio Hondo. “When MotoGP goes to places like Mugello, Phillip Island and Termas there’s no problem with track limits, because those tracks aren’t designed like Misano, which has the kind of corners that riders try to make straight, so it’s easy to go too wide. When MotoGP goes to fast and flowing tracks it doesn’t have track-limits issues because you don’t gain time by cutting the green or going wide.

“So if you design a circuit properly you won’t need all these rules and regulations to control the problems of bad circuit layout. The situation now is that they try to solve one problem, which causes more problems and so on. It’s like a dog chasing its tail.”

Some people who mourn the passing of grass and gravel from racetrack verges have suggested that asphalt runoff should be coated with low-grip paint, so riders who run wide are automatically punished, just like the old days.

“Technically speaking it might be possible to reduce grip in the runoff,” adds Zaffelli. “But first we would have to discuss and agree what is a safe level of low grip and what isn’t.

“Let’s say we find a paint that reduces grip to a good level, then you need consistency in the runoff grip from one track to another, all around the world, which just isn’t possible. The paint isn’t the problem, the problem is maintaining it and checking and controlling that maintenance. It’s simply not possible.

“Maybe some kind of special material would do the job, but that would be degraded by the sun and the rain, so that’s another problem. And what about a paint or a material that works with slicks, will it be OK in the rain, or when riders are doing track days with street tyres? And that’s just bikes – what about cars? So it’s not easy!”

Car and motorcycle racing have changed immeasurably over the decades and they will never stop changing. It’s simply not possible to go back to the ‘good old days’.

Consider how those in charge used to look after rider safety and problems of riders going too fast. Some decades ago, riders complained that the Gerrards right-hander at Britain’s Mallory Park circuit was getting too fast – as bike and tyres go better – so they requested the barriers be moved back. Officials had a better (cheaper) idea: place a six-foot-high wall of straw bales on the inside of the corner to make Gerrards blind – that would slow them down.