Who will Michelin’s new rear slick help and who will it hinder in the battle for the 2020 MotoGP championship? Because nothing has a bigger effect on a racing motorcycle than a change of tyres.

This stands to reason – whatever a motorcycle can do is for nothing if the tyres can’t transfer it to the asphalt. For example, there’s no point having more horsepower than everyone else if your rear tyre won’t hook up on the gas.

Michelin’s 2020 rear has a different construction that deflects to increase the size of the contact patch, putting more rubber on the road for more grip.

But it’s not quite as simple as that. Increasing rear grip changes the front/rear traction balance, which can screw up turning and other performance factors.

If you increase rear grip, riders will use that extra grip, which puts more load through the rear tyre. Logically, this reduces load on the front tyre, which reduces front grip, so the tyre will squirm across the asphalt, rather than hold the road. See the problem?

“The casing of the new rear works more, so the tyre goes flatter, which increases the contact patch, so the bike doesn’t want to turn,” an engineer from one of MotoGP’s V4 factories told me. “The rider has to physically force the bike to turn. That’s why Ducati were complaining about the tyre, because they couldn’t get the bike turned, so they couldn’t drive out of the corners.”

And this is what an engineer from an inline-four outfit told me, “The new rear gives us more mid-corner grip so the rider can hook the bike through the turn better and it also improves corner-exit stability and traction, so the rider can use more exit speed and get to full gas sooner”.

In other words, it seems like the extra force required to turn a V4 through corners causes the new rear to squish too much, moving too much load to the rear and therefore spoiling the bike’s turning ability.

Even comments from Michelin MotoGP chief Piero Taramasso would seem to suggest that the tyre may work better for riders of inline-four MotoGP bikes, which require less physical effort to get through corners.

“In general with this tyre it seems the riders can’t be as aggressive as before,” says Taramasso.

Sounds like Suzuki and Yamaha are in luck, while Ducati and Honda are out of luck. 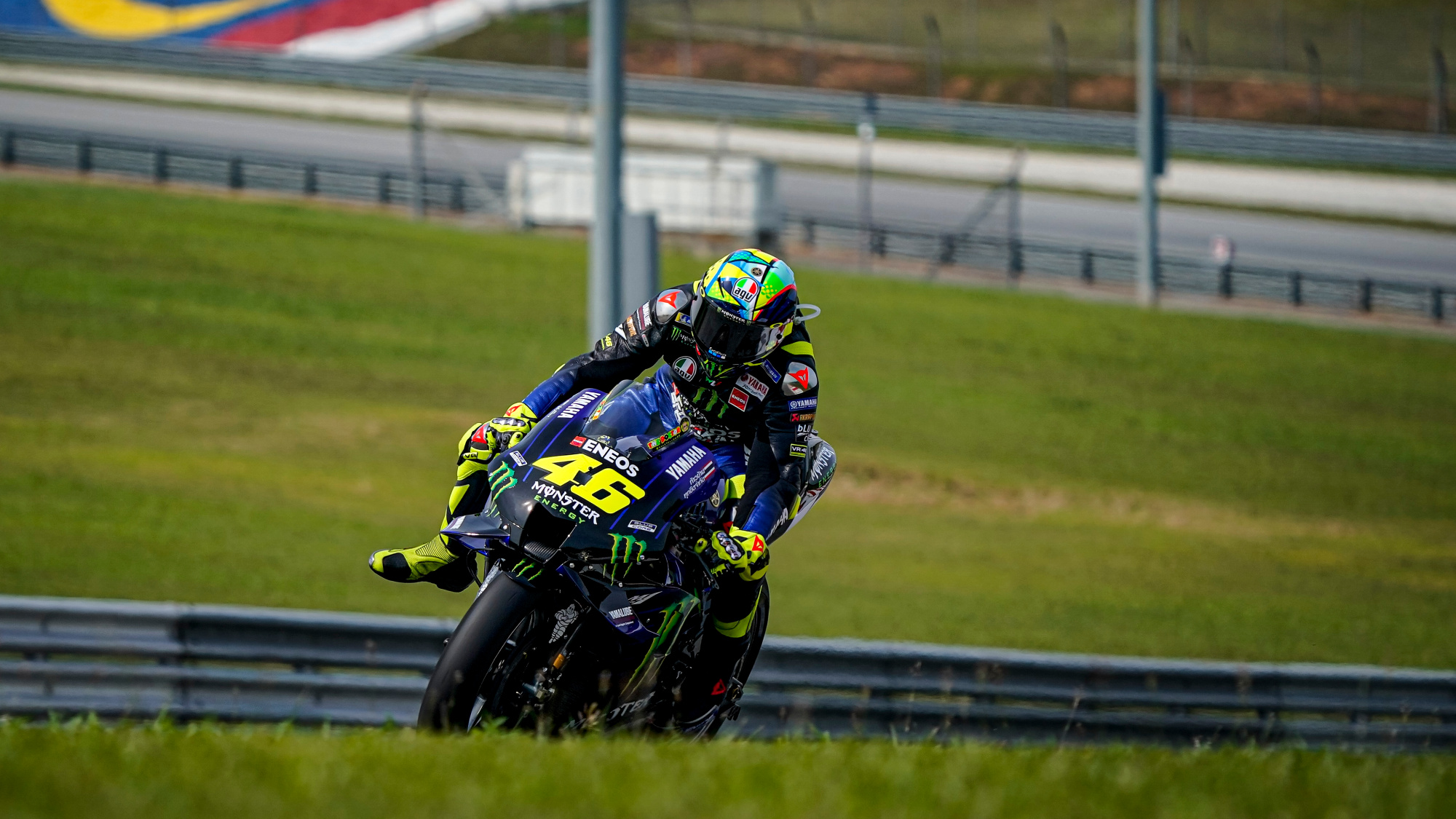 Maybe, maybe not, because this is all baseline stuff. The first time riders and engineers got to concentrate 100 per cent on the new rear was at the Sepang and Losail tests in February, so they’ve only had six full days with the tyre.

The crucial factor in the fight for this year’s MotoGP championship will be which factories rebalance their bikes quickest to the new tyre. This is something they will try to achieve during a frantic schedule of 13 races over 18 weekends, with no testing.

The aim of engineers up and down the pit lane will be to adjust traction balance via geometry and suspension set-up to shift weight bias forwards, to increase front load and therefore regain front grip and turning performance. Each factory will need to find its own sweet spot; then it will be down to which rider adapts his riding technique soonest to make the most of the tyre’s advantages and to ride around any negatives.

“The tyre is more stable in the corner and has a good advantage in the acceleration area,” adds Taramasso. “Also, it helps stop the bike when the rider is using the rear tyre in braking. So the riders will need to brake differently and accelerate differently.”

Changes of tyre spec have always had a major effect on who wins the championship. Here’s half a dozen examples from the last two decades, both during open tyre competition and the spec-tyre era.

2000: During the penultimate 500cc season Michelin’s new 16.5-inch rear slick took over from the company’s usual 17in slick. The 16.5 gave more corner-exit traction so it helped Honda’s more powerful NSR500 to the detriment of Suzuki’s RGV500. By midseason Honda riders like Valentino Rossi had adapted their bikes to the 16.5, which is why Suzuki’s Kenny Roberts Jr score one race victory in the second half of the series. If Honda had adapted to the 16.5 sooner it’s likely Roberts wouldn’t have won the title.

2004: Michelin introduced a wider rear slick with improved edge grip that helped Yamaha’s new signing Rossi exploit the YZR-M1’s corner-speed advantage. At the same time it caused so much chatter with Honda’s RC211V that some RC211V riders called the new Michelin, “the Yamaha tyre”. Rossi won the title. 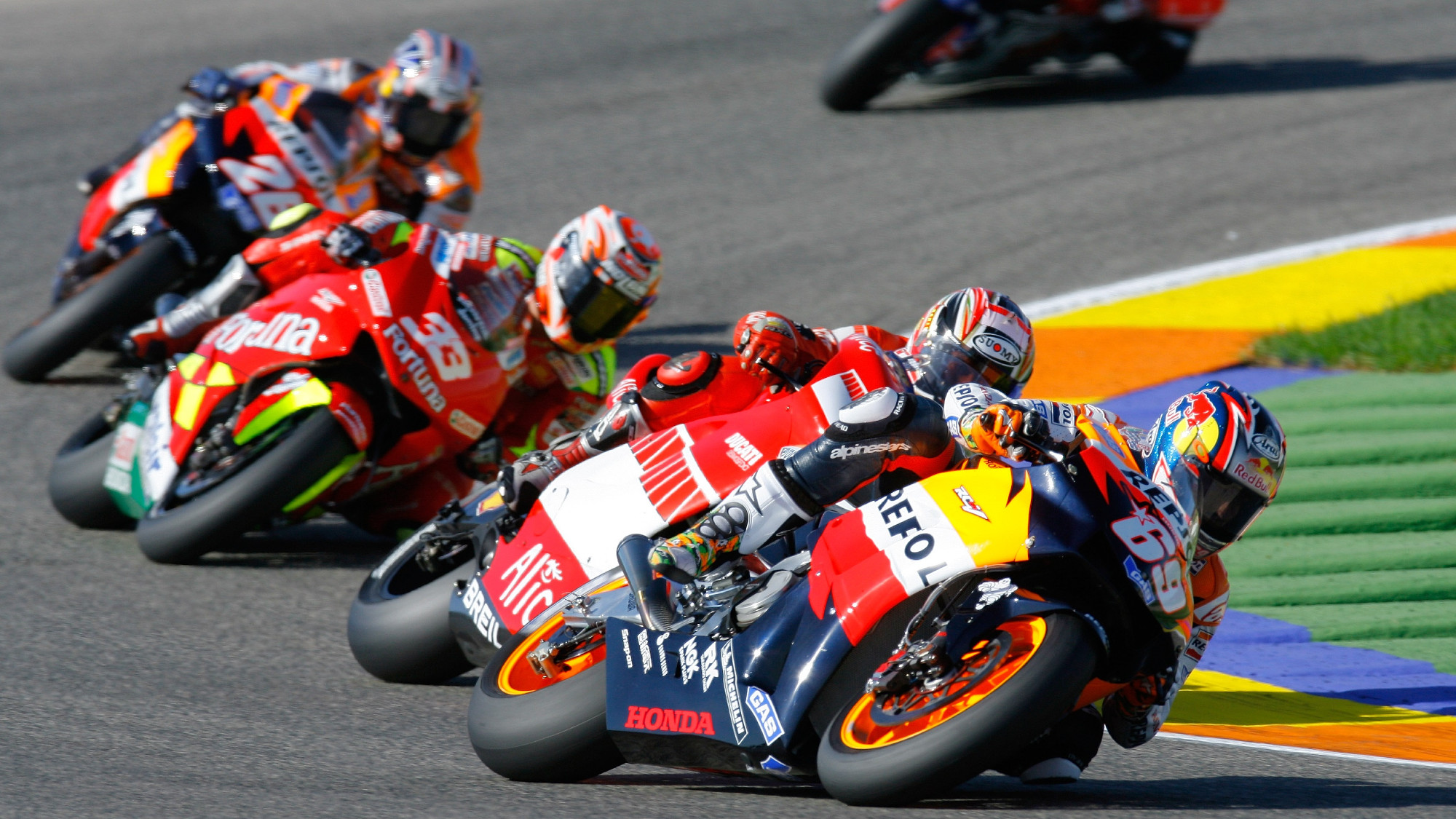 2006: For the first time in several seasons Michelin’s tyres worked better with the Honda than with the Yamaha, compensating for the RC211V’s relative lack of mechanical grip. “I liked it as soon as I got on it,” said Honda’s Nicky Hayden. Meanwhile the tyre caused so much chatter with Rossi’s M1 that Michelin created a special tyre for Yamaha during the season. Hayden won the title.

2012: Midway through the championship Bridgestone changed its spec front tyre, causing Honda’s Casey Stoner problems during braking and corner entry and crucially damaging his hopes of retaining the MotoGP title. Stoner hated the softer-construction tyre. “It doesn’t give you enough support on the brakes – in my opinion it squishes too much,” he said. “The only way to get the support is with higher pressure, which gives you less contact patch.” Jorge Lorenzo won the title.

2014: Once again the pendulum swung, Bridgestone’s latest rear slick favouring Honda over Yamaha. “The new rear is much harder on the edge, so it’s better for Honda and worse for Yamaha, especially for me because I like to carry a lot of corner speed,” said Yamaha’s Lorenzo. “The Yamaha doesn’t turn when you slide with the throttle, in fact then you run wide, so when we don’t have lateral grip in the corner it’s a big problem.” Honda rookie Marc Márquez won the title, taking a record 13 victories.

2016: Michelin’s arrival in MotoGP played a significant part in Ducati’s renaissance. The Desmosedici was better than ever in 2016, but the Michelins helped the Italian brand end its 100-race victory drought. The Ducati makes its lap time via stability in the braking and acceleration phases, so it uses the edge of the tyres less. This just happened to suit the Michelins perfectly. “It’s luck, honestly,” said chief engineer Gigi Dall’Igna. Márquez won the title, while Ducati had its best season since the Stoner years.

No one knows who will get the most help from Michelin’s 2020 rear, but usually it’s the cleverest, most talented riders that work out how to get the maximum out of a new tyre or any other technical upgrade by adapting their riding technique to suit.

Rounds one and two at Jerez later this month won’t prove conclusively who are the winners and who are the losers with the new Michelin – the situation could change race by race as different teams and factories unlock the tyre’s secrets.