Next week MotoGP undergoes its biggest technical shakeup since the arrival of the four-strokes back in 2002: one-size-fits-all rider aids, Michelin tyres and plenty else.

Which will have the greatest effect on the racing? No contest: it’s the tyres, the final interface between motorcycle and racetrack.

The switch from Bridgestone to Michelin will change the whole balance of MotoGP, because over the past seven years MotoGP riders enjoyed a front tyre that was better than the rear; now they have a rear that’s better than the front.

When Bridgestone took over MotoGP the bikes and the riders had to change. This is the way racing works: if your equipment gives you an advantage in a certain area then you must exploit that advantage.

Bridgestone’s front slick was so good that bike design and ultimately riding technique evolved to get the maximum out of the tyre. Michelin’s MotoGP technical director Nicolas Goubert, who last worked in MotoGP in 2006, watched the changes with interest.

“After Bridgestone came in the riders and the factories maximised their performance in the braking area,” he says. “The engineers evolved the bikes in that direction by changing the centre of gravity and so on to allow riders to gain maximum time during braking.

“And of course riding style evolved with that, with Marc Marquez pushing even further in that direction so everyone had to follow that way. Even if a rider makes so much of the braking area that he loses a little time from the apex onwards it doesn’t matter, because he gains so much in braking that he gains overall. Also, straight-line speed has increased, so the speed at which you can decelerate from those higher speeds becomes key, plus if you want to overtake somebody it’s easier to do that in corner entry.”

Now MotoGP commences a new journey, in the opposite direction, and no one knows who’s going to be ahead this time. Hopefully the shift in bias from front to rear and thus from corner entry to corner exit will be wonderful for fans. Because however jaw-dropping it was to watch Marquez tuck the front to help pivot the bike around the apex of a corner, it’s always going to be more fun watching riders getting funky with the rear, as Marquez, Jack Miller and others illustrated during November’s Valencia tests.

Michelin’s current concern is improving their front slick. Riders and teams left those Valencia tests in a bad way, with trucks full of ruined leathers and wrecked bikes. Riders rated the performance of Michelin’s front slick during those tests as “totally unacceptable”, but Goubert blames the majority of the crashes on a poor choice of compounds.

“For sure we made a mistake at Valencia – the compounds were too hard,” he adds. “At earlier tests the comments from riders had been better: quite positive at Misano, acceptable at Aragon, but totally unacceptable at Valencia.”

But Michelin’s Valencia problems weren’t entirely compound-related. Some riders complained that the size and shape of the front contact patch didn’t remain stable throughout the corner, which caused them to crash. Others said the rear slick gave so much grip that when they opened the throttle, transferring load to the rear tyre, the front lost too much load, so the contact patch shrunk and they suffered a terminal loss of front grip. Thus Michelin’s aim is straightforward: to increase the size of the contact patch at maximum lean.

Next week at Sepang all MotoGP riders will test new front profiles and constructions recently evaluated at the track by test rider Colin Edwards.

“We have been working to give riders more potential and better feedback from the front at maximum lean angle,” says Goubert. “When we started, riders said the front lacked performance in the braking area, before they started leaning into corners. I think we improved in that area but then we lacked grip at maximum angle, so now the crucial thing is to give riders more confidence in that area. They need more potential from the tyre and also better feedback that tells them they are at the limit.

“It’s not only a question of compound, but also of profile and construction, to give a bigger contact patch at maximum lean. At Sepang Colin tested our new fronts and said they give him more confidence at maximum angle but maybe less in the braking area. If next week the guys say what he said I’ll be happy, because if the front gives them more potential and feedback at maximum angle they will crash less, then we can work on the braking area.”

Whatever the improvement in Michelin’s front, there’s no doubt that bikes and riders are already changing, just as they did at the beginning of the Bridgestone era. They must do to solve the puzzle of the Michelins.

Last week Valentino Rossi revealed that Yamaha had tried to get ahead of the game by building its 2016 prototype M1 with an ultra-long fuel tank that extends all the way into the seat hump, to shift load to the rear. The bike made its debut at October’s Japanese GP in the hands of Katsuyuki Nakasuga before travelling to Spain for the Valencia tests.

“Yamaha made this bike to understand the way to use the Michelins, with data from 2008,” said the nine-time champ, referring to Michelin’s last season in MotoGP.

If that’s true it’s rather strange because Goubert says Michelin’s current tyres are very different from their 2008 rubber. How could they not be? Perhaps Yamaha realised this at Valencia, because next week they will have the ‘rear-tank’ bike and a more conventional prototype for Rossi and Jorge Lorenzo.

This story would seem to corroborate the theory that control tyres don’t reduce costs but actually increase them, because factories must completely redesign their motorcycles when there’s a change of tyre brand. Who can argue with them when Yamaha have to build two very different prototypes for the new season? It was the same some years ago at Honda – when HRC switched from Michelin to Bridgestone at the end of 2007 it took them three years to build an RCV that could get the best out of the Japanese tyres.

So, which bikes and which riders will work best with the Michelins? Who knows? Bike racing is too complex to make accurate predictions – motorcycles are so strange dynamically that two plus two really can end up equalling five.

Might the Honda work best because it’s more of a point-and-squirt bike that allows riders to rapidly transfer load from one tyre to the other? Will the Yamaha suffer because it needs a constant contact patch at both ends to sustain its high corner speed? The Suzuki certainly looked good at Valencia, possibly thanks to its easy-going chassis. And what about the Ducati? No one knows, yet.

Lorenzo thinks the new tyres may work for him. “With the Michelins you must anticipate the braking more and release the brakes earlier – this style could be good for me,” says the world champ: the last rider to win a MotoGP race on Michelins, at Estoril in April 2008.

Marquez and Rossi sound less confident. “You must stress the front tyre less,” says Marquez. “And at the moment it’s impossible to save the front like I could with the Bridgestone.”

From the archive: “With the bike you can also modify your style to go faster,” Valentino Rossi (December 2008)

Maverick Vinales was one of the few who sounded upbeat after the Valencia tests. “We understood how to make the corner so you don’t lose the front,” said the 2015 MotoGP rookie who may benefit from the fact that he hasn’t been riding Bridgestones for years and years. “I only rode with them for one season, so I can ride the same with the Michelins and I don’t have any problems.”

So, all eyes on Dani Pedrosa and Vinales. Possibly… 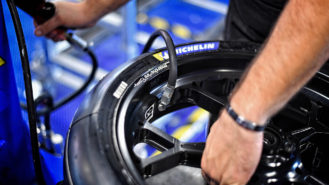