The climate crisis is making a lot of headlines at the moment. There are those who believe it is already too late to throw the world into reverse as it hurtles towards the brink – rainforests burning, glaciers melting – but surely it’s worth a go?

Motor sport needs to play its part in this effort, for all kinds of reasons. Formula 1 says it is already working towards sustainability by 2025 and carbon-neutrality by 2030, which seem incredibly ambitious targets.

Part of this push includes a move to carbon-neutral fuels, which don’t add carbon dioxide – the most dangerous greenhouse gas – to the atmosphere.

A different push is electric-powered racing. Car racing’s Formula E is already very popular, probably because it’s carving its own niche, away from F1, with the racing taking place in city centres – Rome, London, New York, Berlin and so on – which encourages a whole new audience.

MotoGP introduced MotoE in 2019 and is now looking at carbon-neutral fuels for its three internal-combustion categories. These could arrive in Moto2 and Moto3 within the next three years, before moving into the premier class.

It took 2000 fermented and triple-distilled apples to ride 11 miles, including a 159mph test track run

But are electric racing and electric road cars and motorcycles a better answer to important environmental problems than internal-combustion engines powered by carbon-neutral fuel? Who knows? But it’s time to find out.

“We are establishing a working group with all the manufacturers,” says MotoGP technical director Danny Aldridge. “We will work with them and with the fuel companies, who are the experts here, to see what’s the best way forward.

“This is with the blessing of the manufacturers, because they want this to happen. So we have to agree a spec for the fuel, test the fuel and then take it to the track. It makes sense to start with the lower categories, partly because they run spec fuels. The very earliest that will happen is 2024.”

Of course it’s important to understand what really matters here, because the emissions created by MotoGP bikes are a tiny fraction of the sport’s total emissions.

Last year Formula 1 published a study into its own emissions, coming up with these numbers: logistics create 45%, personnel travel 28%, F1 factories and facilities 19%, event operations 7% and the actual racing 0.7%. These numbers don’t include fans travelling to races, which might dwarf everything else.

F1 is already using a small percentage of bio-waste (yes, that’s the stinky kitchen waste you leave outside your front door for the recycling truck) in its current race fuel. Next year it will use E10 fuel, which includes 10% ethanol, produced from the fermentation of plants, and which is already widely used in road vehicles.

Meanwhile Brazilian cars and bikes have used E100 fuel for the past four decades, 100% ethanol derived from sugarcane.

There are two ways to go with low-carbon fuels that might help save the planet for human habitation: bio-fuels and synthetic fuels.

At first glance the first of these seems the easier option, but of course you need enough plants and plant waste, which may not be easily achievable, because we need plants primarily to feed us, not to take us up the road or around a racetrack. 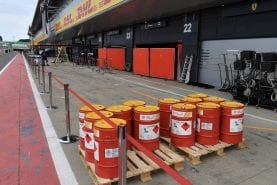 For example, motorcycle and environmental journalist Rupert Paul recently converted a Triumph 675 to run on E85, made from apples. It took 2000 fermented and triple-distilled apples to take him 11 miles, including a 159mph run at a test track.

“Bio-fuels are very simple fuels, so we already have some old technologies that allow you to be carbon neutral with internal combustion engines,” says Aprilia’s chief MotoGP engineer Romano Albesiano. “I remember 30 years ago we were making carburettors for motorcycles being shipped to Brazil where they use E100 fuel, which is nothing exotic or super high-tech. And you can have more octane than our current fuel, no problem.

“Then there are new technologies, synthetic fuels, which obtain fuel from a chemical approach, which needs energy, but this can be derived from renewable sources, so you can obtain fuel that releases CO2 when it burns, but you’ve stored the CO2 previously.”

To create a so-called closed-loop system, in which the CO2 emitted by MotoGP bikes at one race is reabsorbed by the fuel produced to power the bikes in upcoming races is the kind of nirvana that humanity is chasing, but these production methods take a lot of energy and cost.

However, closed-loop systems do already exist.

“This is the point – because when you burn wood it’s carbon neutral in a range of time comparable to human life,” adds Albesiano. “Because when the tree grows it captures CO2 and when you burn the wood it releases CO2, so this is the cycle, and you have to look at this as carbon neutral. This doesn’t apply to fossil fuels, because they come from millions of years ago.”

Albesiano, like pretty much everyone else in the MotoGP paddock is a petrolhead, so it’s no surprise that he wants to keep working with the sound and thunder of the internal-combustion engine.

“If the target is to be carbon neutral there are relatively simple and clever ways to get there without abandoning the internal-combustion engine and going to strange technology, like electric or, even stranger, hybrid,” he says. “This is my opinion.

“I think it would be possible to get the same performance as now, more or less, from carbon-neutral fuels, or even more. But, anyway, it would be the same for everybody.”

Of course, making all human activity more sustainable, not just racing, is what really matters.

“In general, transportation accounts for 20 to 25% of total CO2 output, which is an important amount,” Albesiano continues. “But the priority that’s being given to these emissions should be applied to every other area of activity, from industry to farming.

After the first MotoE race, it’s not the present that really matters — it’s the future

“There is a political craziness abut electric power. Everybody says electric is the way, because they say there are no emissions, but this isn’t a serious approach.

“Carbon-neutral fuel is quicker, simper and achievable for everyone, because if you look at the cheapest electric cars, there will be many people who won’t be able to afford a car anymore

“I don’t say no to electrics. But we should consider that there are some applications for electricity that are super-good – urban mobility, for example – but then you look at electric trucks… you must be joking! And what about recycling batteries from electric vehicles?

“If we have a simple technology that we can use tomorrow, why refuse it? But then of course maybe in 20 or 30 years new electric technologies and other technologies will be available and the scenario will change again.”

The fact is that MotoGP, like most human activity, will never be totally environmentally friendly. But how about this – create racing classes that aren’t segregated by engine capacity but by units of energy, with the manufacturers using the best low-emission technologies to create that energy, thereby furthering development of technologies that might allow us to live on Earth without messing up the place any more than necessary.

All of this needs thinking about.