The Suzuki GSX-RR’s ability to keep the Michelins inside their sweet spot is one reason why the factory is leading the way in MotoGP. Could the other reason be Suzuki’s enthusiasm for the latest Öhlins rear shock?

The Swedish suspension company, which has won the last 13 MotoGP titles, introduced its BDB50 shock during preseason testing at Sepang in February.

But convincing factory engineers to adopt new parts becomes more and more difficult now that testing time is so limited. No longer do MotoGP teams have half a dozen preseason tests during which they can devote time to evaluating every new part, so they are often nervous about trying something that might upset the balance of their machine.

Suzuki riders Joan Mir and Álex Rins have used the shock pretty much since the start of the season. The other factories that use Öhlins – Aprilia, Honda, Ducati and Yamaha – have been slower on the uptake. At Misano Two the shock was adopted by Valentino Rossi, Pecco Bagnaia and Stefan Bradl, while Álex Márquez and Cal Crutchlow started using it last weekend, when the shock topped and monopolised the podium for the first time.

Usually there is a tipping point, when a new part’s advantage becomes clear to everyone. Maybe Aragon 1 was that moment.

“These days teams have so many frame and engine combos that it’s only right at the end of a three-day test, when everyone is tired and wants to go home, that they come to us and say, OK, let’s try this new shock’,” says Öhlins racing manager Mats Larsson, who’s been a MotoGP suspension engineer since the 1980s. “Also, it gets harder and harder every year to make something that has the rider saying, ‘Hmm, that was something different, I like this,’ when he comes back into the garage.

“Suzuki were the first to see the potential of the new shock. But even they took some time. They had some good results in testing, but then engineers get a bit anxious and don’t want to change something even if it’s clearly better. Often at the last moment they will revert back to what they know, just to be ‘safe’.”

Suspension on a racing motorcycle does two main jobs. First, it generates grip by helping to put the correct load into the tyres. Second, it controls chassis attitude, to create the geometry needed to turn into and out of corners. 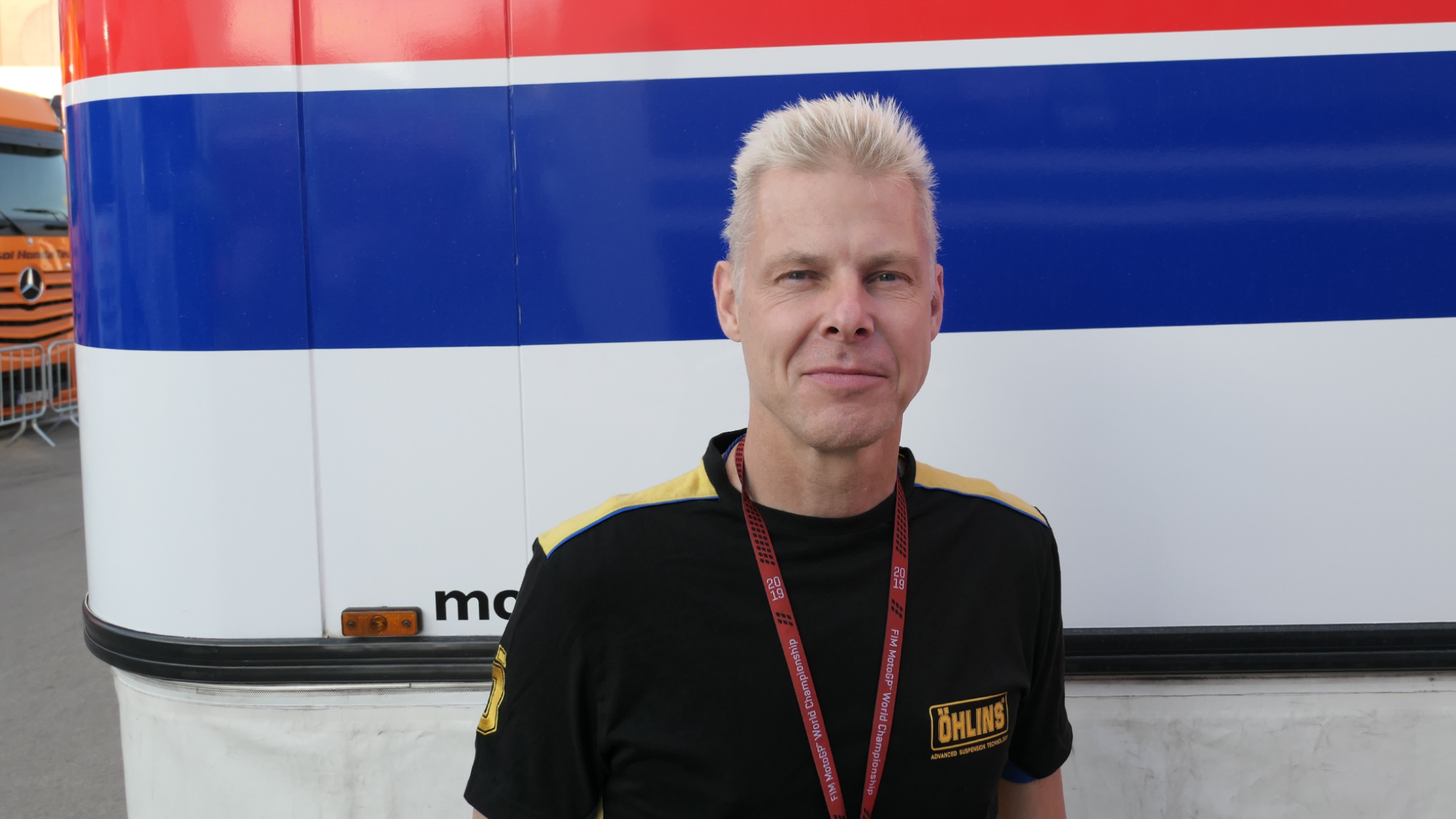 The BDB in the shock’s designation stands for bi-directional bleed. This isn’t a new concept in suspension, but Öhlins is patenting the BDB50, so there’s obviously some clever stuff going on within the shock’s valving system.

“Once the patent has been signed, sealed and delivered I’ll be able to talk more about it,” adds Larsson. “Basically, this shock is about creating better side grip and drive grip. This is one of the things riders have commented about, especially Valentino [Rossi], who said he gained a lot of metres getting out of the corners. To him it was a clear advantage.

“The suspension needs to react and follow all the forces to provide a constant load to the tyres. Sometimes it’s not so much about damping force, it’s about how quick or slow you’re building up the damping.

“Maybe it’s easier to think about this in terms of the way an engine performs. When you look at an engine dyno graph there are two axes – rpm and horsepower. But you can have an engine that has four horsepower less but is more agile and more user-friendly. It builds horsepower more to your liking. This is what we are working on – how quickly or slowly you build up the damping.”

The big surprise is that Yamaha and Ducati haven’t really adopted the BDB50, especially considering Franco Morbidelli’s comments about the Suzuki after Sunday’s race. The Petronas Yamaha rider reported that the GSX-RR had amazing mid-corner grip and corner-exit drive – the shock’s two big positives.

When new kit arrives in MotoGP it often takes a while for riders and engineers to be convinced. Usually there is a tipping point, when a new part’s advantage becomes clear to everyone. Maybe Aragon 1 was that moment.

Obviously different bikes and riders have different needs and preferences, but I’ll be surprised if Morbidelli, Fabio Quartararo, Maverick Viñales, Andrea Dovizioso and others aren’t working with the BDB50 when Aragon Two practice commences on Friday.