More than ever before we live in a rules-based world: do this, don’t do that and if you do do that we’ll have camera evidence and you’ll find the bill in your email tomorrow morning. Or the points deducted from your world championship tally.

What drives all of this? The desire for control and the desire for improved health and safety. But the push for a safer world doesn’t only come from governments, local authorities and businesses wanting to make our lives safer, it comes from them wishing to avoid incidents and accidents and the subsequent lawsuits that will cost them millions.

Inevitably MotoGP is caught up in the same process. Dorna wants to make the racing safer, for the good of the riders and for their own good too.

On Sunday world championship leader Fabio Quartararo was sanctioned three seconds and therefore three championship points when his leathers apparently unzipped in the closing stages, forcing him to jettison his chest protector and then show off his pecs to appreciative male and female fans around the world.

MotoGP’s rulebook clearly states what riding kit should be used – including a chest protector – and how it should be worn, i.e. correctly. So Quartararo was in breach of the rules. He should have been immediately black-flagged and brought into the pits where he either would’ve retired or been able to sort himself out and rejoin the race.

The fact that Race Direction didn’t immediately black flag Quartararo was a serious error from people who should know the rulebook better. Quartararo finished the race in fourth place and might have retained that position and the 13 championship points if rival factories hadn’t intervened and demanded that the rules be followed to the word. Hence the three-second penalty, which demoted him to sixth.

Personally, I think it was wrong to sanction him after the race. If Race Direction makes a mistake, it should swallow that mistake.

If Quartararo ends up losing the 2021 world title by three points or less this race will haunt him for the rest of his life. He wouldn’t be the first to suffer thus. In 1981, factory Suzuki rider Randy Mamola lost that year’s 500cc world championship because the visor of his Nava helmet misted up during two rain-affected races, blinding him. Those days still hurt the American. 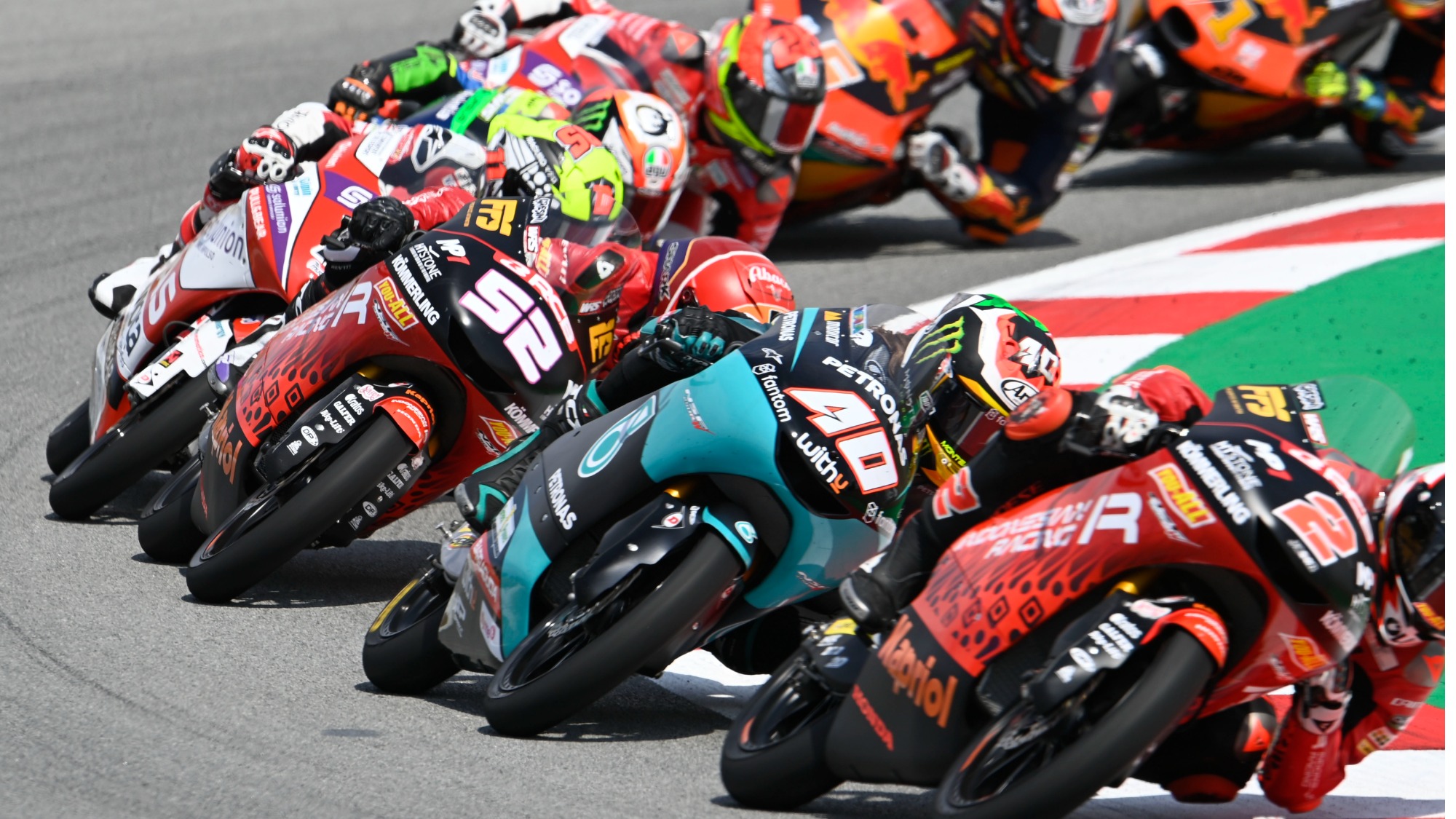 Part of the lead pack in Sunday’s Moto3 race

I wore a Nava around the same time and suffered the same problem in club racing. I tried to get around it by holding my breath through the corners, then exhaling as I rode down the straights, hoping the visor would clear by the time I arrived at the next corner. Not ideal.

Of course if you take this ongoing rule-making philosophy to its logical conclusion then MotoGP would have to ban what makes motorcycle racing dangerous: crashing. Sanctioning offenders for losing control of their motorcycles would reduce accidents and improve safety for the riders, marshals and other circuit staff, wouldn’t it? Impossible to argue with that. But I hope I haven’t given Dorna any ideas.

Which brings us to the next philosophical question: can MotoGP ever be too safe?

“This sport is becoming that wimpy now – there’s no danger anymore,” he told me in 2010, when asphalt run-offs were becoming a thing.

I both agree and disagree with Stoner. Of course I want racing to be safe, but if someone was able to make motorcycle racing as safe as tennis I think I’d find another interest.

I’m with legendarily adventurous American author Ernest Hemingway who is alleged to have said, “There are only three sports – bullfighting, motor racing, and mountaineering and all the rest are merely games”. (NB: I hate bullfighting.) Some danger adds another dimension to a sport and people become interesting when they’re under pressure, dealing with the risk and everything else. That’s one reason why I find bike racers more interesting than football players.

Stoner hated the introduction of asphalt run-offs, which were created to improve safety, which they did. The Aussie thought they make life too easy for riders who find it difficult to stay on the black stuff and encourage maniac overtaking attempts, because riders can make a lunge and if it doesn’t succeed they simply run off the track and continue without paying any real price. Unless of course, they collide with their intended victim.

And this is where track-limit rules came in. If you give the riders more asphalt to use then some of them will use that extra asphalt to gain an unfair advantage, so new rules were introduced to prevent that happening.

And because modern MotoGP racing – in all three classes – can be so close that races and positions are won by fractions of a second those track-limit rules are now interpreted to the millimetre. 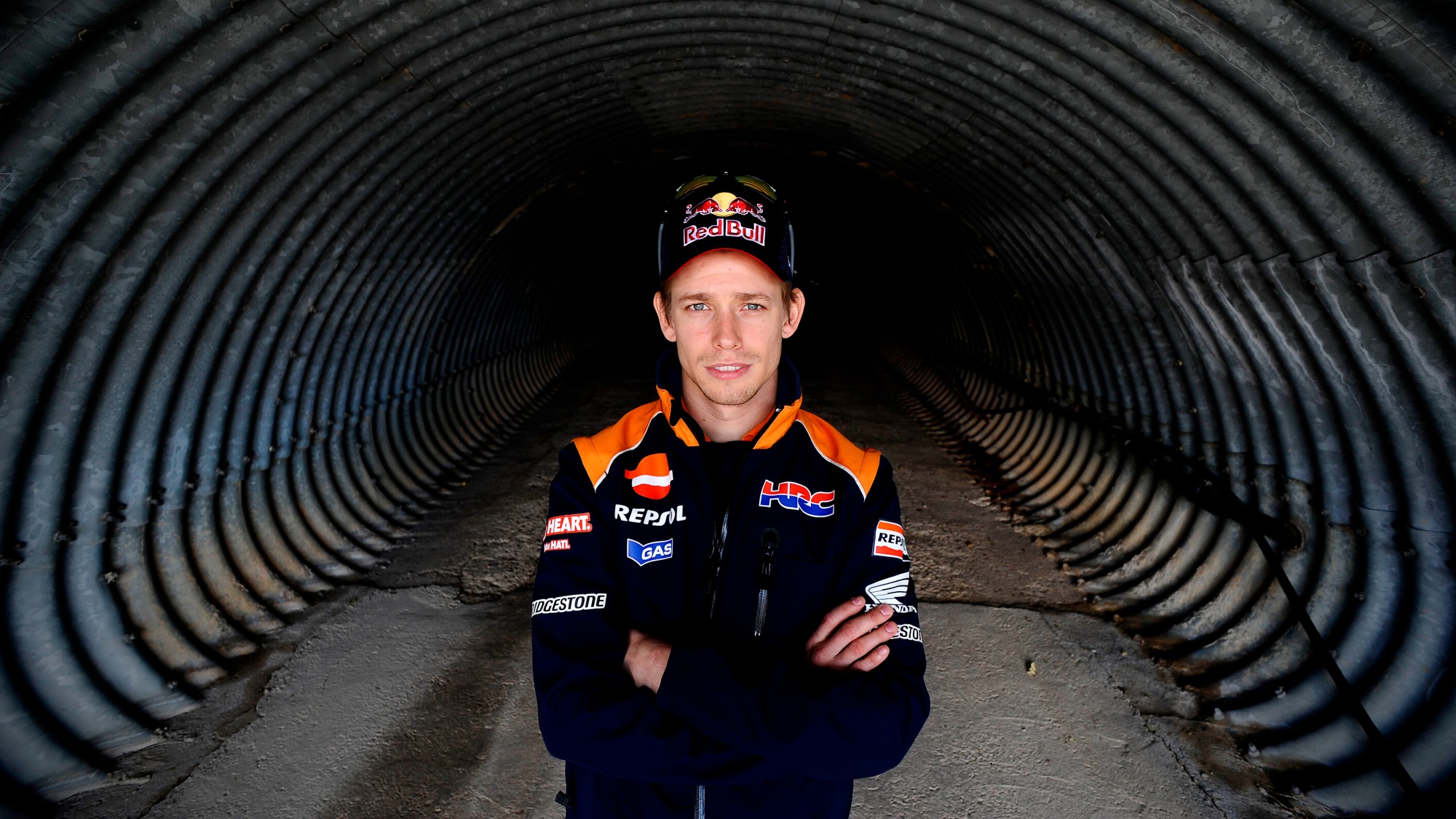 Casey Stoner hated the introduction of asphalt run-off, which then required track-limit rules

Two weekends ago at Mugello we saw Moto2 rider Joe Roberts lose a podium for running fractionally wide on the final lap. It didn’t seem fair, but he broke the rules. Whether you agree or disagree with those rules is another matter.

An hour or so after Roberts’ heartbreak the MotoGP parc fermé was thrown into chaos when Miguel Oliveira was told he had touched the green no-go area on the final lap, demoting him to third in favour or the originally third-placed Joan Mir. Then it was announced that Mir had also touched the green, so their positions stood. This is not a good way to run a parc fermé celebration. It sucks the joy out of everything.

Originally the green zones were policed by marshals and by available camera footage, then special image-recognition cameras were introduced to catch offenders and finally pressure sensors within the run-off. But at Mugello the sensors didn’t pick up Mir’s infraction. The idea of using technology is to take human decision out of the process, but if the technology isn’t reliable, what then?

What to do? Get rid of the green zones? Replace them with asphalt areas studded with razor-sharp spikes? Or reprofile the green zones so they only catch out riders making serious infractions. Better still, redesign corners that cause the most infractions, like many of the corners at wrong-way-around Misano, which is a track-limits nightmare.

But let’s forget green zones and unzipped leathers for a moment. MotoGP currently has a safety issue that’s many, many times bigger than anything else. It’s called the Moto3 world championship.

At the moment every Moto3 race is a horror movie – grimly entertaining but you’re always on edge, waiting for something very nasty to happen.

After Sunday’s race the entire Moto3 grid – riders and teams – was dragged before Race Direction and the FIM stewards for another telling-off. These lectures have been going on for years and they rarely have any positive effect, because riders (especially young riders) will do anything to go as fast as they possibly can, regardless of whether that puts themselves or anyone else in danger.

The riders are obviously to blame, aren’t they? 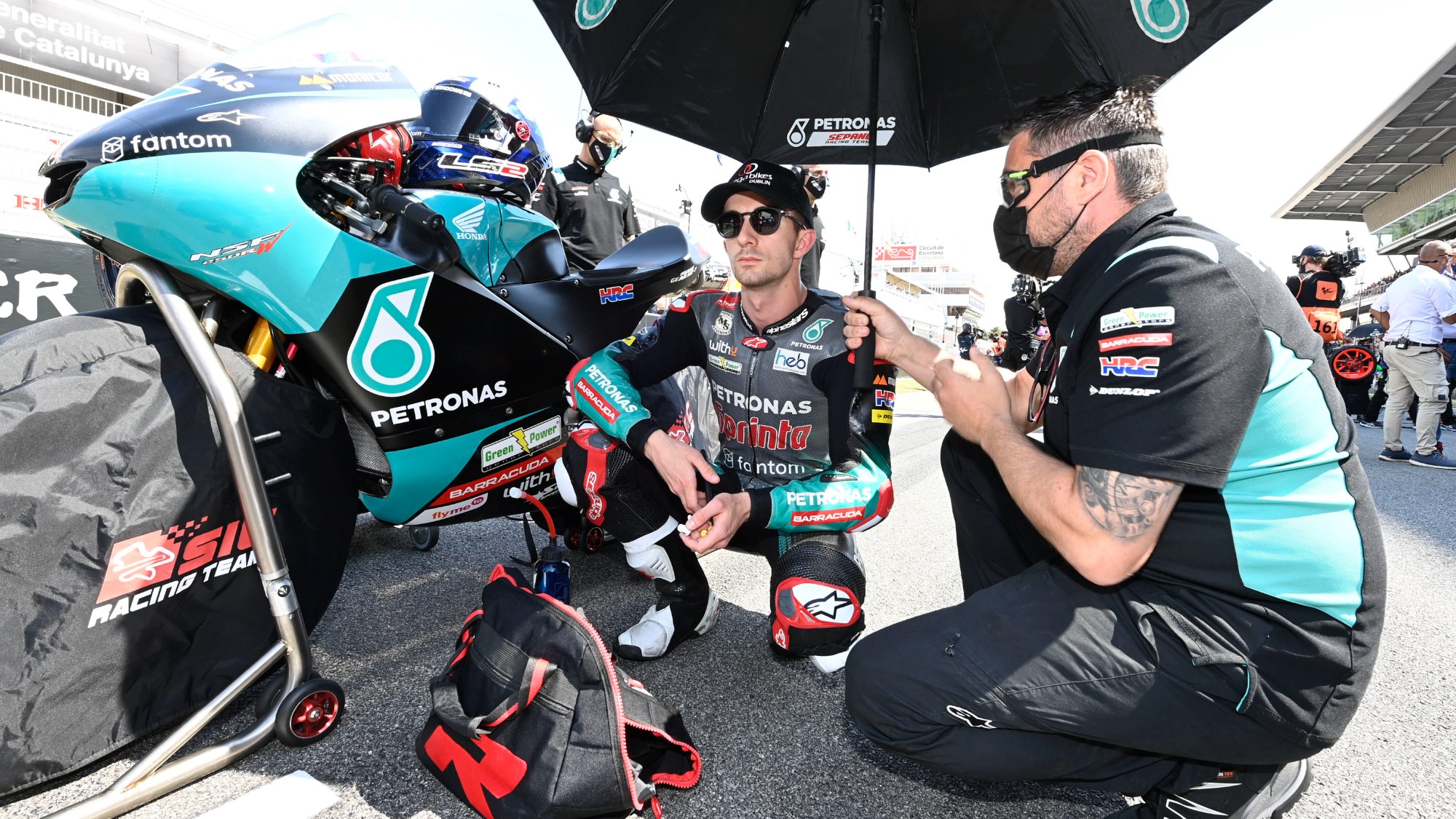 I don’t think so. It’s the super-equal machinery that’s the problem, or rather the technical regulations that create the machinery. For a decade or more Dorna’s objective has been to create a level technical playing field in Moto3, Moto2 and MotoGP, so that riders can make the difference and not so much team and factory budgets. It’s 100% an honourable aim but look at where it’s taken Moto3. Now every race is a big accident waiting to happen.

“It’s getting a bit silly and a bit dangerous,” said Petronas SRT Honda rider John McPhee who crashed out of the lead of Sunday’s race while trying to get away from the pack. “I was trying to get out there. I got my head down and tried to make the break, because it’s a mess, it really is a mess. 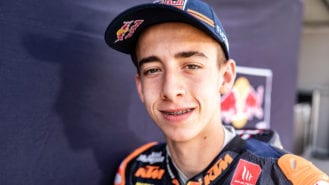 “It shouldn’t be possible for a guy who’s a second or 1.5 seconds lower than the fastest guys to be in that group challenging for the win at the end of 20 laps. Literally anyone of them could’ve won the race so it’s not the most talented rider or the fastest rider. You need skill to be there but because the races are so chaotic it’s allowing people who aren’t fast enough to have the chance to win, because you can go from first to ninth or ninth to first in the slipstream!

“After the race I spoke with some of the other guys like [Andrea] Migno and [Nico] Antonelli and they’re all so frustrated. The only way it can be made safer in my eyes is to make the bikes faster – go to 350cc or 450cc – because there’d be fewer huge slipstreaming groups. They definitely need to do something about practice and qualifying too – I genuinely think a super pole would be good.”

Of course these problems don’t only exist the Moto3 world championship. It’s much the same in the Moto3 junior world championship, which has schoolkids racing around circuits at 140mph, elbow to elbow. There have been deaths in the junior series and – apart from the obvious horror of a child dying – I cannot think of a worse advert for motorcycling than 14-years-olds getting killed while racing motorcycles in high-profile races that make headlines around the world.

Sure, school kids die in horse-riding accidents, swimming accidents and so on. But society doesn’t judge those sports and pastimes the same way it judges motorcycling, which it always judges very harshly.

What to do? How to you spread out the Moto3 pack and reduce the number of multi-rider accidents?

I have no sensible answer but Dorna needs to come up with one quick.