Main image: a pre-race event in Brno, but perhaps not the one the weekend deserved

At Brno I asked Dorna if they would arrange a minute’s silence on the MotoGP grid to mark the 70th anniversary of the end of the Second World War, which claimed the lives of 55 million people and changed the lives of hundreds of millions forever. Indeed, it changed the entire world forever. We all live with the ongoing effects of what happened back then – just ask anyone who lives in Brno and knows what happened there during the war. 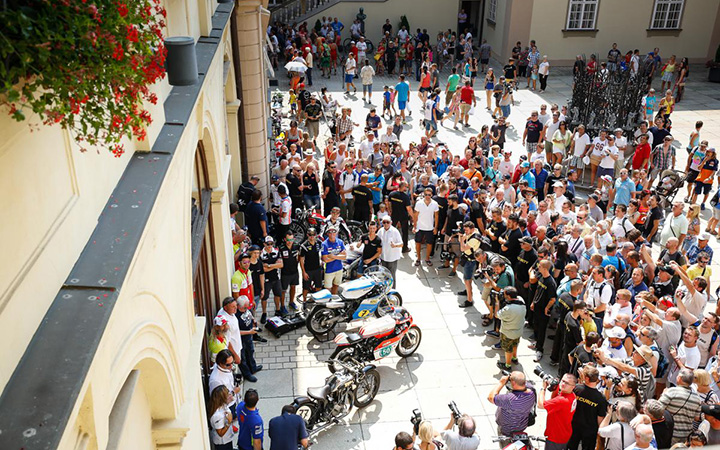 Carmelo Ezpeleta considered my request and turned it down, even after I had pointed out that during the weekend of the 1997 Czech Grand Prix he happily arranged a minute’s silence on the grid to mark the occasion of the death of Princess Diana.

The idea of commemorating such a huge event as the end of the world’s greatest conflict is not at all to celebrate victory or patriotism or nationalism or anything else, but to ensure that everyone remembers what happened, in the sincere hope that such a war will never happen again.

Sport is meant to be a distraction from the trials and tribulations of life, but it is not entirely separate from real life. Dorna has arranged silences for many tragic events that have taken place far from the paddock and have nothing whatsoever to do with MotoGP: the death of Princess Di, the murder of a Spanish politician by ETA, the recent German Wings air disaster and so on.

The fact that they chose to ignore such an important anniversary as the end of WW2 makes me wonder if they – like some other sports like Formula 1 and football – are becoming entirely divorced from humanity.

During any weekend at a MotoGP event you can witness many strange goings-on that would boggle the mind of an outsider and have you questioning the sport’s grip on reality.

Take a seat at the daily factory Yamaha media debrief and you will see Valentino Rossi answer questions from the press while sitting on a yellow chair. When he is finished with his debrief he departs and the yellow chair is solemnly removed by a member of staff and replaced with a red chair, upon which Jorge Lorenzo will later sit and answer questions. 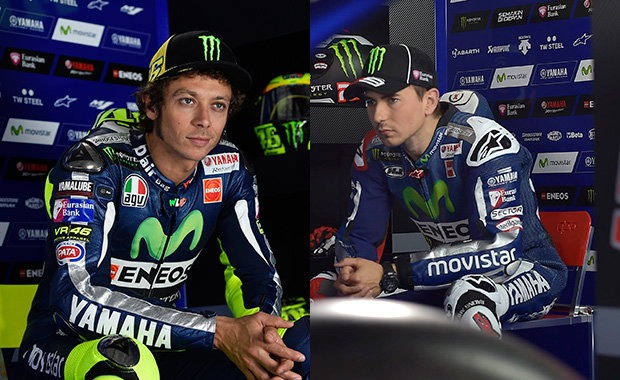 Down at Ducati, bouncers are employed to ensure that no one under eighteen years of age sits on the team’s red-and-white paddock scooters, on account of the factory’s ongoing financial support from Philip Morris tobacco.

Outside of this cosy little motor sport microcosm with its all-pervading sense of perfection anxiety, such behaviour would be seen as weird at best. It smacks of a system that is losing touch with the things that matter and instead finds itself running around in ever-decreasing circles to create its own pathetic little reality.

Each season the MotoGP world becomes more like Formula 1, with VIP luxury and celebrity accommodation the obsession of the men in charge, while the real people who make it happen – the fans who turn on their televisions each weekend or make the effort to turn up at the racetracks – remain an awkward distraction at best.

Fans lucky enough to obtain a pass for a paddock tour follow their guide down the paddock’s grand avenue, gawping at the factories’ glistening race trucks and some of the comically ostentatious hospitality dens. 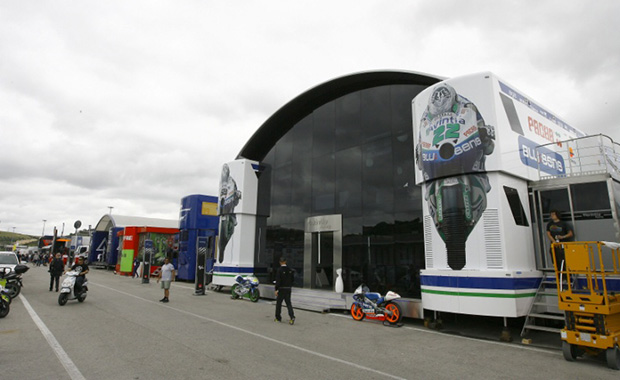 It is ironic that the only chance they have of standing and watching mechanics working on race bikes is if they slip away from their tour guide and keep walking beyond pitlane, towards the cheap end of the paddock, where the lowliest Moto2 and Moto3 teams toil away in Dorna tents, because pitlane isn’t big enough to accommodate everyone.

Fans lucky enough to gather outside these tents, just inches away from the bikes, can watch the mechanics prepare the bikes, then watch the riders ready themselves for battle and ride out towards the racetrack. Those fans can honestly say that they felt part of the action: smelling the oil, the brakes and the leathers, and seeing with their own eyes the whites of the eyes of the riders.

There is a lesson to be learned there, but Dorna’s probably too busy to learn it because it’s doffing its cap as it shows some actor/model/sportsperson/politician the inside of Valentino Rossi’s pit, in the hope that a little reflected glamour will bring the corporate millions flowing into the sport. It never does. Next it politely ushers the same celebrities past those pits owned or sponsored by alleged fraudsters and money launderers.

Some fellow journalists told me that a paddock commemoration of the 70th anniversary of the end of WW2 couldn’t be justified because it all happened such a long time ago, but the world’s most lethal war should never be forgotten. Others told me it wouldn’t be appropriate because it might upset the descendants of those on the losing sides. That is pure ignorance: most soldiers on all sides in any war don’t want to fight. Even the dead winners are losers.

Some years ago my brother Julian worked for Honda. Following his death – as a result of a motorcycle accident – several Japanese Honda staff kindly attended his funeral. They were the first Japanese my dad had met since he had fought the Japanese army in Burma in the 1940s.

They all knew that the real people to blame were the maniacs at the top, which is why those in charge now should never be allowed to forget that the whole world – even the old and the young in the MotoGP World Championship – will never forget what happened during humanity’s darkest of days.