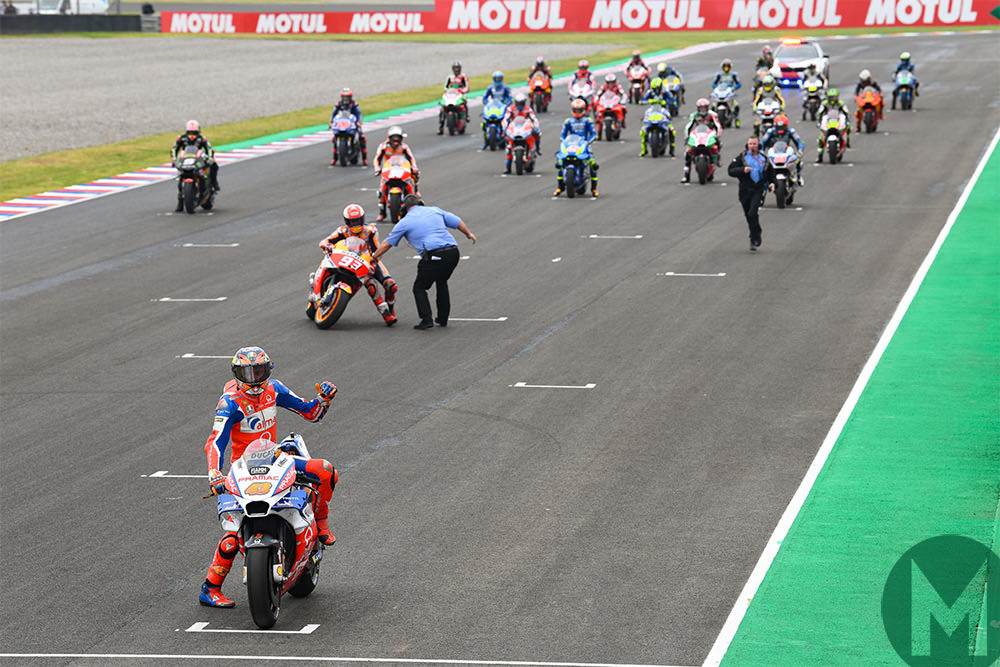 It was an amazing experience, we had no idea how well we did considering it was the very first race. We were battling with Kenny Roberts and Barry Sheene and even had a chance for the victory with around eight or nine laps to go. It was an amazing first time out for HRC considering we had basically no experience at all. It is certainly a memory that I cherish and time gives you great perspective.

I was at an event over the weekend in Canada, my first time in Canada incredibly. Living in the United States, born and raised, I’d travel all over the world but never north of the border to Canada. I was there for the Spring Motorcycle Show right outside Toronto with incredible motorcyclists of all demographics and all interest levels.

One of the things, when I’m out like that, is that I don’t get to sit down and watch as much of the race, but I was looking at the weather and I had a feeling it was going to be an interesting weekend.

That track has produced some interesting races over the years, like the great battle that Valentino Rossi and Marc Márquez had in 2015 when they came together late in the race – Marc crashed and Valentino went on to win the race.

The weather can also sometimes be really nice there or, as it was over the weekend, pretty iffy.

Qualifying was certainly interesting – there were a couple of riders up there you wouldn’t normally expect, like Tito Rabat. And what a great run for Jack Miller. I’ve met him a couple times and he’s a really good kid; he’s very respectful and I think really wants to be there and wants to do well. He got on the Honda and there was a lot of expectation, which was natural because of his results in Moto3, and so he had to work through that. Now he’s on the Ducati and it seems like the versatility of the bike seems to fit a wider range of riding styles. Jack went out in qualifying, gambled and did a good job. It didn’t surprise me that he was on pole, he’s been building up and building up.

In those conditions, riders like Márquez (though he’ll hang it out there too), Dovi and most other veterans play a little more cautious and don’t take as much risk in qualifying. But you can’t take anything away from Jack, he certainly put in a great lap. Marc, though, had shown in most conditions that he was going to be really tough.

At Qatar, he was strong on a track that normally suits the Ducati and almost won. I think everybody suspected that didn’t bode well for the rest of the field as the season goes on, unless unpredictable things happen in the race. As we all know, they did in Argentina.

Before we get onto that, something happened before the race at Ducati: Jorge Lorenzo came out and said that Dovi has been trying to undermine him since they were both in the 125 World Championship class. He didn’t really expand on that but you wonder what that means. My first reaction to that is that he’s feeling a lot of pressure, which is understandable, and a lot of disappointment in his own expectations.

You can’t worry about the other riders that much and he’s talking about the fact that he seems to still be struggling with the bike and it still needs some adjustment to make it more suited for him. I don’t want to see him focusing on other riders like that, he’s got to get his confidence back and find his ability to be more consistent, putting in laps day in, day out. He did it during the winter test when he set the lap record. My feeling has always been, if I can do it once, I can do it another time and continue to do it.

You have to have that almost powerful and clear mindset to be able to repeat it. He has struggled in qualifying and even more so in the race. We’ll have to see what happens as the season goes on.

Now, what a beginning to the race it was. There have been so many opinions and so much speculation, but let’s take the starting grid first. Jack Miller’s team took the risk. In a flag-to-flag race, if you roll off the grid you’re supposed to start from the pits. But I think they were trying to do a hybrid, and what I mean by that is they realized that if there are too many riders in the pits then it’s a safety issue.

So, they brought them out on the grid and put Jack up front with everybody else about three or four rows behind. That was supposed to give him the advantage that he would have had, and deserved because they took the risk. If you want to change tyres in a flag-to-flag race because of the weather, then you lose the advantage of starting from the grid.

They should have done something different, I think. If they’re not going to be starting from the pitlane then they should have just let everybody change tyres, announce it’s a safety issue, let them come back onto the grid and just start the race. Doing it the way they did just looks silly.

Then, what happened with Marc when the bike stalled and he tried to restart it, there seemed to be confusion. Basically, he should have been pushed off the side of the track and started from the pitlane. But you delay the start, that way there’s consistency if something like that happens again. You can’t depend on the riders, it’s not Marc’s fault; it’s really up to the marshals, track stewards and race director to stop the proceedings, put everybody back on the grid and do another sighting lap. That way it stops the uncertainty. Once the race had started, I think they did the right thing by penalizing Marc with the ride-through.

After that you had the incident between Johan Zarco and Dani Pedrosa. It is racing, and the bikes are very close in speed now and the two corners where Johann’s and later Marc’s incidents happened are long entries in the way they angle in. Now it’s the same for everybody, as my dad used to say, and so if everybody can get through without running into each other…

If it does happen you get a penalty of some sort, the main thing is that it should be applied across the board. Johann wasn’t penalised, Marc was.

I feel sorry for Dani with the wrist problems he’s had and the surgery. But it is racing – I’ve been knocked down a couple times, I’ve been hurt by being knocked down like in the 1982 German Grand Prix while leading when Franco Uncini hit me on the last lap battling with Randy. I broke my collarbone and not only did I get hurt but it cost me the victory. It happened again with Christian Sarron at the hairpin at Assen in 85; it happens.

The rider that it happens to has a responsibility in how they respond and how they react to it, so does the rider that caused the issue –  we’re professionals. We have a responsibility not only to ourselves in the way that we conduct ourselves but to our sport, too. It’s just part of the professionalism of what we do, and looking at the big picture, a couple of the incidents that happened were unfortunate in how it reflects on our great sport.

I’ve always said motorcycling is viewed by people that understand it and they’re going to have their preconceived ideas of why we do it. But there are so many people that look at our sport and respect it so much and that’s what we all should think about and remember.

The guys who were battling at the front almost got forgotten about a little bit, although Cal Crutchlow made sure everybody understood what great rides they put in in tough conditions.

It was a great battle between Cal, Johan and Alex Rins and Jack for most of the race, a great ride and a very, very well thought out race for Cal Crutchlow in those conditions. Other riders had problems and made mistakes in the wet parts with brakes locking up – all you’re trying to do is be consistent and it was very impressive running the pace they did up front.

It was great to see – Jack and Cal had won before, Rins and Zarco haven’t, but they were right there battling for the victory on four different brands of bikes. They were just really, really great rides and you want to make sure that they get the due respect and adulation that they deserve.