Freddie Spencer gives his take on the MotoGP of Spain, where Dani Pedrosa led a Honda 1-2. Plus, he talks Miller v Bautista, the part Jerez played in turning things around for Lorenzo, and how Viñales might be feeling the strain.

The Jerez circuit is one of my favourite tracks. That’s not because I really like the layout too much – actually, I love the hotel there, I love the location and it’s just a really nice area of southern Spain, a beautiful place to go – but the reason I like the track is because it is difficult in a couple of ways.

One is the way the corners are laid out, especially in the first part of the lap where you have those double left-handers. You spend a lot of time on the side of the tyre, you’re trying to carry momentum, you’re accelerating off the corners and then trying to get the ‘bike to come back for the entry to the next whilst still pretty much on the side of the tyre. Then there are those fast rights in the very back part of the track – it’s a challenge.

Then you also have the changing weather conditions. That track has always been sensitive to heat change and if it gets warm, that really affects the grip levels. That creates some challenges for the riders, which I find very interesting.

Let’s talk about the riders who struggled. Jack Miller and Bautista, with that incident that they had in the race: I understand the frustration of Jack as a young rider. You’ve got to understand what he’s thinking about right now. He had a lot of hope and aspirations coming out of Moto3 and he’s had three years in MotoGP, but now he’s at the end of his contract. He’s trying to show that the decision to go directly from Moto3 to MotoGP was a good one.

He’s shown he has the speed. Of course, he won the race last year in Assen, and if the conditions are a little bit tricky he really shines. I don’t think it’s just because he takes risks, I think he’s a rider that’s very sensitive and has good feel. It’s just a matter of him consistently doing it and maybe even having more belief in himself and getting his emotions under check. Not something he managed in that moment with Bautista. You can’t really do that.

I got knocked down one time by Christian Sarron on the first lap of the Dutch Grand Prix in 1985 and when I got up my first thought was ‘I can’t believe this!’ But you soon realise it’s racing. I understand that emotion, I really do.

Cal Crutchlow is another rider who was hoping for a good weekend. The conditions were a little bit tricky and tough. He does a great job when it’s like that; he’s a fighter. Unfortunately he got caught out, tucked the front and crashed so his day was over. I think he really believed he could have got third place and the way the Hondas were looking that certainly was a possibility. 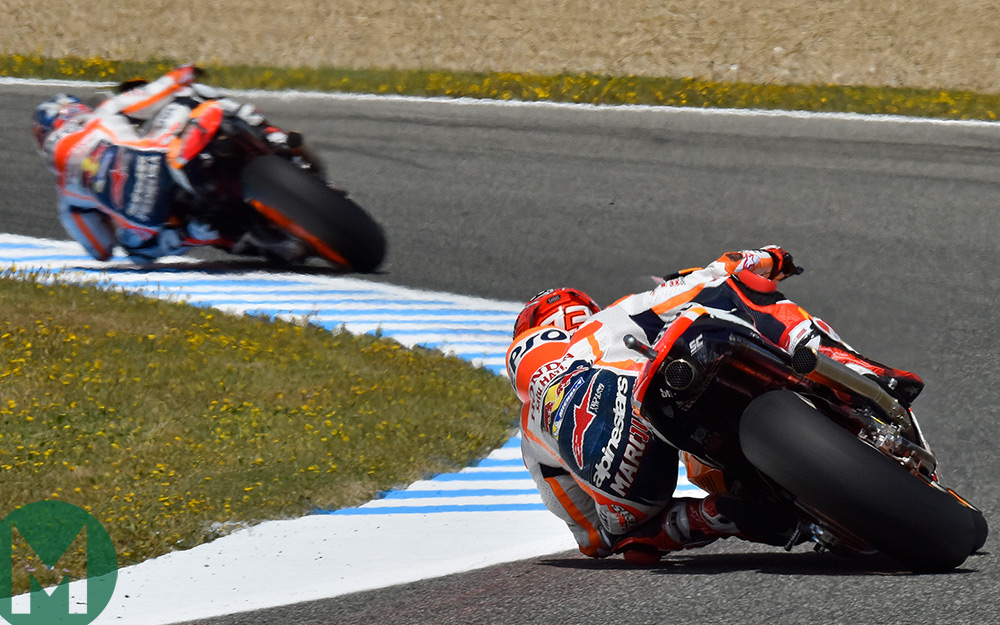 Now let’s talk about the race. First off, Dani Pedrosa. It didn’t surprise me that he shone in those conditions and this is why: Dani is a small rider. Standing next to him I feel like a giant, but Dani has an incredible gift for utilising the motorcycle to work with him. He doesn’t overpower the ‘bike or try to steer the ‘bike, he utilises the physics of the motorcycle, the rolling inertia, the gyroscopic effects especially of that front tyre to help the ‘bike steer. He is very precise with his movements and utilising not just the front tyre or the rear tyre, but both together and that’s what you need in tricky conditions so that you don’t overuse that little bit of edge grip that you have to work with.

That was a professional job that Dani did on Sunday, and it’s great to see a veteran racer in those tough conditions use all of the above to benefit him. If you look at his lap times, how consistent he was with his lap times it was a really good job to be that precise.

Second up was Marc Márquez and Marc rides the ‘bike a little bit differently. He really utilises the rear of the motorcycle to slide that ‘bike in to get it to change direction and once the ‘bike slides and regroups the weight goes back to the front. About three quarters of the way through the race you could see he was really trying to push and close in on Dani, but I think he overused the front tyre a little bit.

I like watching that as growing up in Shreveport, Louisiana near Texas, we raced around dirt tracks, which had a narrow groove with all the grip you had. The rest of the track was so slippery you couldn’t get out there and race. If you got out there or slid out of that little groove, 10 guys would go by you, but it made you really be precise on corner entry. That was what I liked about Jerez the first time I raced there. It required that tight precision and if you did it correctly, as Dani did yesterday in those though conditions, then you’d have a great day.

But Marc did a great job to get second place. He didn’t over-push like some of the other guys did and maybe have a crash and not score any points like he did in Argentina.

Third place – Jorge Lorenzo. Jorge couldn’t have been happier if he won the Grand Prix. I think for him it was a little bit of redemption and he talked about it afterwards that he’s maybe showing that he made the right decision. We’ll have to wait and see. He goes well at Jerez and he’s also a rider that uses the balance of the motorcycle front to rear to work together on corner entry very well and he’s very precise with that. I think that helped him yesterday.

The other thing that helped him was the slow race pace. They were only two seconds quicker, total race time, than when Valentino won there last year and 29 seconds slower than when Jorge Lorenzo won that race in 2015. Twenty-nine seconds – that’s quite a bit. Normally you don’t see that. I think that helped Jorge and some of the other guys to maintain that pace.

Fourth place – Johann Zarco, a great job and another rider who is very precise. He doesn’t try to overpower the ‘bike and it was another great result for him and the Tech 3 Yamaha team. 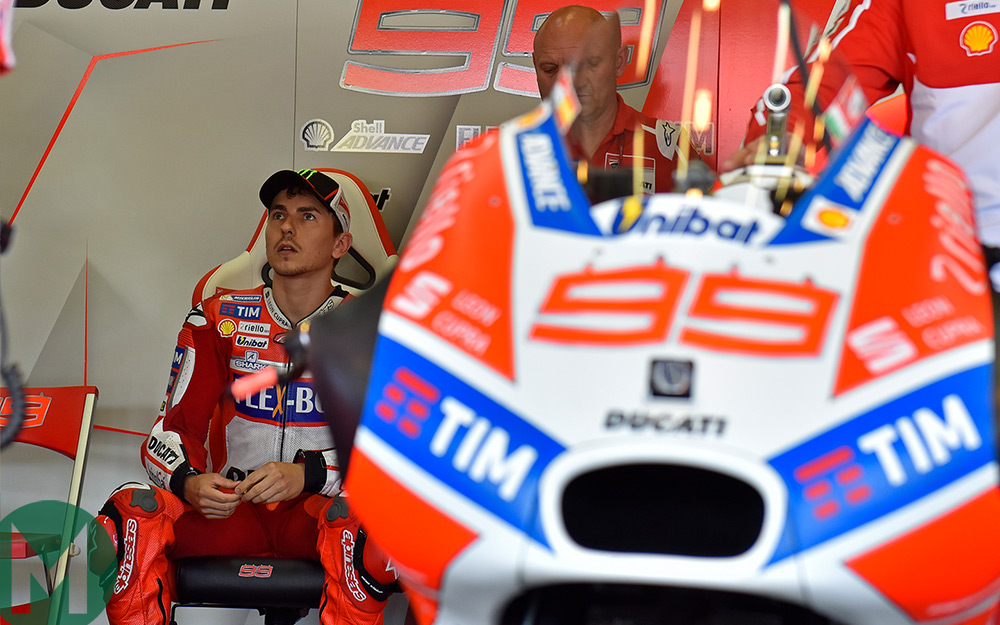 Valentino is really struggling and it will be interesting to see what is going to happen. There was even talk I think, possibly, of trying a different chassis that they’re testing Monday in Jerez. One of the things that Valentino was maybe going to try was going back to the 2016 chassis like Folger and Zarco are running and that might help Valentino.

The other thing they’re testing is the harder construction front Michelin tyre that everyone is trying to go back to. I have found in my years of racing that the construction is mainly for stability. It certainly helps feel, but I think Michelin maybe has missed the boat a little bit in those really hot conditions with the compounds. It’s probably a combination of both. In my opinion it’s mainly construction issues that affect stability and feedback. There was talk from some riders who didn’t use their knee-sliders much on the left-hand side because they weren’t able to run that much lean-angle. I really felt for the guys with the struggle for that.

Like I said, you can work around set-up issues or even traction issues by changing your line and adjustments, but if the tyres are well off it really limits what the riders can do and then it becomes more of a technique as I pointed out with the guys who were successful yesterday.

We’ll see what happens with Valentino. I really like his attitude this year – he’s not letting a lot of things affect him. He’s leading the world championship now by just two points over Viñales, but I think it’s certainly the right attitude.

The last rider, of course, is Viñales. I hoped we’d get to see the battle this weekend between him and Marc Márquez that we didn’t get to see in Austin. His attitude is a little bit different and we saw that come out with the pressure in Austin and then this weekend. Especially after the races it was ‘I didn’t do anything, it’s this and that’ and maybe he’s feeling that pressure a little bit. We’ll see – he’s still young and he’s not been in this position before in MotoGP. Of course he’s won a world championship, so it’s going to be interesting to see what happens at the next race.

I’m looking forward to it. I hope you are too.