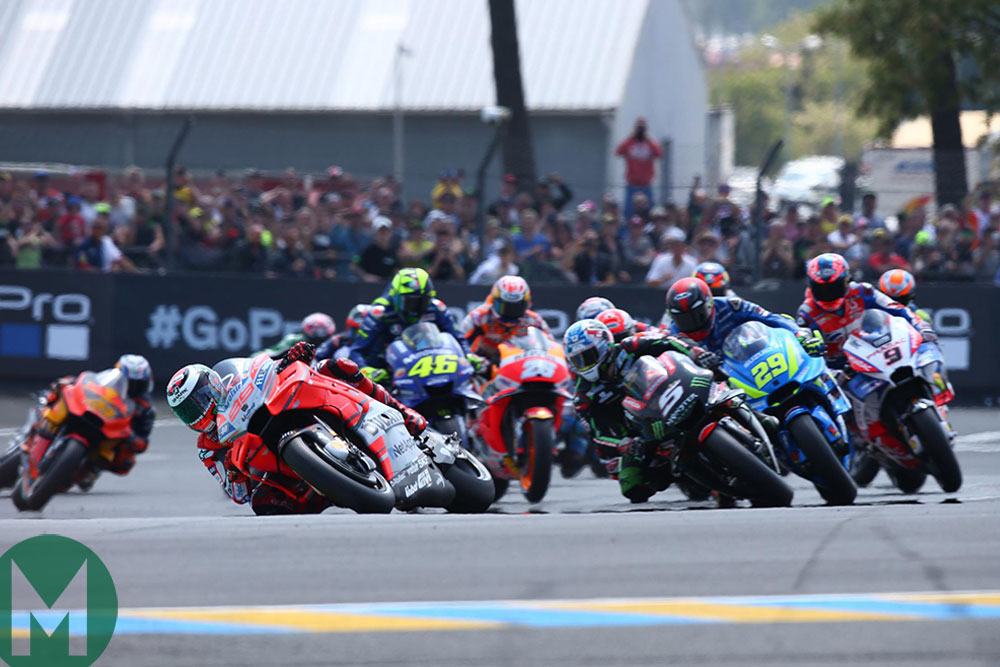 This is Freddie Spencer coming to you after the 2018 French Grand Prix at Le Mans. Now, the first thing I want to talk about is what it was like for me the first time I went to Le Mans while leading the world championship, in 1983. I had talked about it last year in the broadcast, about what it was like that first lap in practice coming over the Dunlop bridge into the first right-hander – even though the sweep into what is now the chicane went straight over the hill – when I made a mistake, going straight on. I turned around realising that we were racing the Bugatti circuit. That first weekend I was racing at Le Mans was also pretty interesting because of the weather, as we raced in April and it was pretty cold. In fact, it was the weekend that Erv Kanemoto and I figured out that putting some medical gloves under the leather gloves kept our hands warm, and the same thing with our feet – it certainly helped me to go on and win the race. That weekend, Kenny Roberts struggled with some mechanical problems but Honda took a 1-2-3.

So, Hondas have always gone pretty good at Le Mans. I know in recent years it’s really been, as they talked about in the broadcast, Jorge Lorenzo who’s been pretty much the dominant force there. I think he’s won like five times at the French Grand Prix at Le Mans, and he certainly knows the racetrack.

I could understand why the Yamaha would be strong there in its present configuration, because it’s known as a bike that the riders are struggling with now. Normally, with the wheelspin and the big bang (cross-plane) engine, it gets pretty good traction and good throttle control. But they’re struggling with electronics, as Valentino Rossi has talked about, and certainly you can see an inconsistency with Maverick Viñales too. But the other Yamaha team, Tech3, with the young rider from Malaysia doing very well over the weekend, showed that Hafizh Syahrin has a good chance of being the top rookie for the year over Marc VDS Honda rider Franco Morbidelli, and that’s going to be a real statement if he manages to pull that off. He certainly had a good race, and he’s a lot more talented than people realise. Maybe that’s what Hervé Poncharal saw in him, as an ex-racer himself, so it would be interesting to see what happens with the Tech3 team now that it’s moving to KTM.

There’s also a lot of talk, and it’s interesting here in Britain, about what’s going to happen with Bradley Smith. He shows moments and laps of promise and he seems like he’s going to get it figured out during a race weekend but I’m not sure if it’s a confidence issue or what exactly has been happening with him. There’s been a lot of speculation that the change of tyres to Michelins has not benefited Smith, but we’ll have to see what he can do over these next few crucial races. Hervé seems to have some patience in choosing who should be the second KTM rider when it makes that transition to the manufacturer.

Now, Cal Crutchlow had an interesting weekend. We’ve talked about the fact that he’s had a couple of crashes going into this weekend, and whether it was going to be three in a row. And he did have some crashes in practice. I remember looking at him before qualifying began on Saturday, and watching him move around, you could see that he was a bit slow in his movements and his third crash in Q1, where he highsided, was the worst possible situation. He was at the mercy of how high the bike threw him and how fast he hit the ground. In fact, he spent the night in the hospital and woke up Saturday morning unsure about whether he could ride. He had a bit of blood in his lungs, but he’s tough as nails and he was able to get out there and do a pretty decent job, which was unsurprising given how tough he is. It showed just how hard he’s pushing to be able to run out front. Maybe it would’ve been three races without a point but he hung in there and did a good job.

Let’s talk about the main teams now. The expectation with Jorge Lorenzo was high this weekend, and there’s a lot of pressure on him going into certain circuits where he has a good track record – tracks that seem to favour him for whatever reason. And if he can’t get the job done on those circuits, it’s certainly going to be hard when he gets to other places, maybe tracks on which he doesn’t feel as comfortable. So, he was able to, it looked like, be right up there in qualifying. Andrea Dovizioso did the job that he wanted to do and in fact, in his case, he signed a new two-year contract. It would be interesting to know how much that was worth. Before, he was earning about a million to two million dollars, and you wonder if that’s been doubled or tripled. I’d probably hold out for at least three times more but what’s important these days – I know you get some money outside of the team, from sponsors, which can help – was that he got that out of the way. He should be ready for the season ahead. One thing he couldn’t afford was two weekends in a row of not scoring points after that unfortunate crash with Jorge and Dani Pedrosa at the last race (Jerez). Going into this race, he had a good qualifying position.

The top qualifying spot was taken by Johann Zarco in front of his home crowd. It couldn’t have been better and that lap he put in was pretty spectacular. The track has changed over the years, as back when I raced on it, it was definitely bumpier, but they’ve changed the back part of the circuit now and there’s no kink leading into the final right-left chicane. It used to be a straightaway with a left kink, but overall the track hasn’t changed too much. There’s a chicane on the front straightaway instead of going straight over the crest into the right-hander at the bottom, but it’s similar, and it’s a pretty tight circuit.

Even in my day, with the 500 CCs, it wasn’t a high-speed circuit by any means. It really challenged you to not be too aggressive, which I think is one reason why Jorge does a good job there. It was slippery back then too and the surface and grip levels are a lot better now.

So Zarco put in a great pole lap, which is exactly what the French fans were hoping for, and it probably improved the attendance for the Sunday. So very high expectations – the last time a French rider was on pole in France was in 1988, with Christian Sarron at Paul Ricard. So it’s been a long time, 30 years, and the French fans were waiting a long time for that.

Marc Márquez had another great weekend in getting the job done with consistent laps in practice, which is what I always look for, and his ability to just string those laps together quicker than anyone else – in the 1min 32sec-33sec range – meant that the Honda was working well on all tracks. That doesn’t bode well for everyone else. Márquez managed to qualify in second position.

It was a really good run for Danilo Petrucci, who came through in Q1. What was impressive was his ability to step it up again after he made it into Q2 to get onto the front row. He’s letting Ducati know that, for some reason, if it lets Jorge go to Suzuki (it might be a good fit) then Petrucci should be up for the job. They’re both Pramac riders, not only Danilo, but Jack Miller who’s been consistently quicker in the last few races. He’s finished in the top 10 consistently on the Pramac Ducatis, and he’s seemed comfortable as the bikes suit him. It’s great to see, coming directly from Moto3 to improve and get the job done. There was that one race win at Assen (2016) in tricky conditions but now he seems to be doing a great job as he held position in France.

So the front row was fixed, but Rossi and Viñales’ struggles continued. I think everybody was hoping that Zarco could get that first win on his home soil, but as the race began, you could see the patience of Márquez. It was very impressive, and he’s just come into his own with that. everybody talks about the crashes in practice, but we know that he has the process of pushing as hard as possible – I made a comment on a show in Petersborough with Dave Aldana who was hauling those riders 30 years ago –  and Dave said that Márquez will push, crash, and then back off. That’s what Márquez does, but he doesn’t crash when it counts. He focusses during the race and runs his own pace, and did a great job of that on Sunday. You could see that he picked his way through the pack and waited for Dovi to make a surprising mistake, and then a few laps later Zarco ran a little bit wide.

Zarco had the choice to run off the track, run wide, or try to make the corner. And you could see that he was out, to the disappointment of the home fans.

Marc was able to get the job done, then Petrucci in second and Rossi in third. Miller was up there too. Lorenzo, however, faded at the end. He mentioned that he has problems staying focussed on the Ducati, which is a difficult motorcycle to ride. It doesn’t look promising for Lorenzo, but Márquez looks like he has everything under control. It’ll be interesting to see what happens in the next race at Mugello, and I hope to see you again in the next Rider Insight.