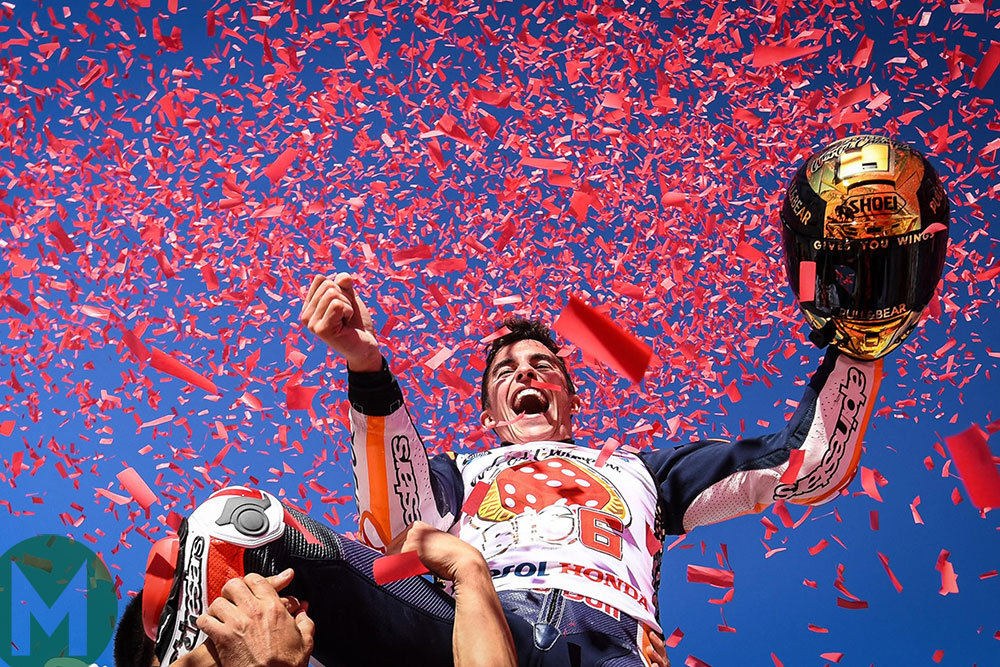 Valentino Rossi finished fifth in the championship, which isn’t so surprising. He’s 38 years old, and 2015 was his best chance to be MotoGP champion again but he had some great races this year.

That performance at Silverstone is a perfect example where he led for most of the race and he never faded. It was an example as to what he can do on any given Sunday but that’s going to be the most difficult thing for him next year. He’ll be 39, and it’ll be more difficult if Yamaha still struggles to get the bike to perform to the standard of its 2015 and 2016 variants.

He’s an old warhorse, however, and he certainly has the crowd behind him; he has the motivation. I even read the other day when he said that he’s scared to retire and that doesn’t surprise me at all.

I’ve said many times, nobody is better being Valentino than Valentino, and I’ve known him ever since he was a little boy and he is just inspired to ride.

So it’ll be interesting to see, and it’s great for Grand Prix racing when Rossi is up in the mix for the win late on a Sunday afternoon.

Now, Dani Pedrosa is a rider who has come back from his wrist problems, and he shows every year that he can still win races with a couple of wins. That performance that he had at Valencia when he was battling with Johan was really great, and you know, he just gets the job done.

He’s a great team-mate to Marc Márquez – he really is – and he’s not a threat to Marc. I think they’re very similar in the things that they do to get that Honda working and he’s going be up there next year for his 13th year in the championship.

Maverick was a disappointment, I feel. I predicted him to finish second in the championship this year, and I couldn’t wait, and I was really looking forward to that race where everything came together and it was marc and maverick – old childhood rivalries.

I mentioned early in the season, Loris Baz told me that when they were kids it was Maverick and Marc who battled, and everybody thought maverick would be right up there and maybe even better.

He had a lot of ability but he just took a different path and I think this season showed that. He was really strong in winter testing, won three races and then I think he realized he was leading the World Championship.

Again, it’s kind of sensitive and a little bit emotional, and he had that incident in one of the practice sessions with Valentino and he got distracted. That’s something he’s going to have to work through and not allow to happen, because that will definitely affect you and get you off your focus and your ability to perform at your absolute best which is required at this level.

So if he can work through that, get stronger mentally, become more methodical and check his emotions at the door once he leaves to get ready for the race I think that he certainly has the ability again – if Yamaha can get the bike working better late in the race.

Andrea Dovizioso on the Ducati: what a surprise, and what a great performance this year. He was able to work through the disappointment of so many years, with a seven-year drought between 2009-16, and then he took another six wins in 2017.

I think the burden with Jorge Lorenzo coming in, motivated him, and again, it’s that mindset we talked about earlier. He changed his way of life.

He’s certainly a smart rider – he showed that in those two wins with Marc Márquez where on the last lap, last corner he set Marc up perfectly, and it drew Marc in and it forced Marc into a mistake or forced Marc into being unable to make exactly the right move.

He was able to just make those two moves and pass Marc to win the race. Both of them were very smart and very methodical. It’s going to be interesting to see next year if he can maintain that level of performance week in and week out as he did this year.

I don’t see why he can’t if they make some improvements on the bike – mid-corner direction change is one of them – and I think we will not only see Jorge do even better but I think Dovizioso too, so that’d be great.

The last rider, of course, who won the World Championship and I’ve talked so much about this year, is Marc Márquez. And what can you say, because I think the performances reflect what Cal Crutchlow said about the Honda and its inconsistency and how difficult it is to ride at its very top – just like an unpredictable 500.

With 27 crashes, that’s the only thing he needs to improve upon because eventually – we hope it never happens – you get hurt.

It was a great performance this year and he was 37 points behind Maverick Viñales after the first three races, but he told his crew that he wants to be in the points lead before the summer break, and he was tied at the summer break.

It’s one of the things that Marc does so well, and he and I have talked about it, that you’ve got to believe it to make it happen. And he certainly did that.

It’s going to be an exciting 2018 season, and I look forward to doing more of these podcasts and I hope you’ve enjoyed these ones, so have a very happy holiday, a merry Christmas and enjoy your winter.