World Champion Freddie Spencer explains the small change at Ducati that made the difference for Jorge Lorenzo, what’s behind Maverick Viñales’ struggles, and looks at Lorenzo’s move to Honda alongside Marc Marquez 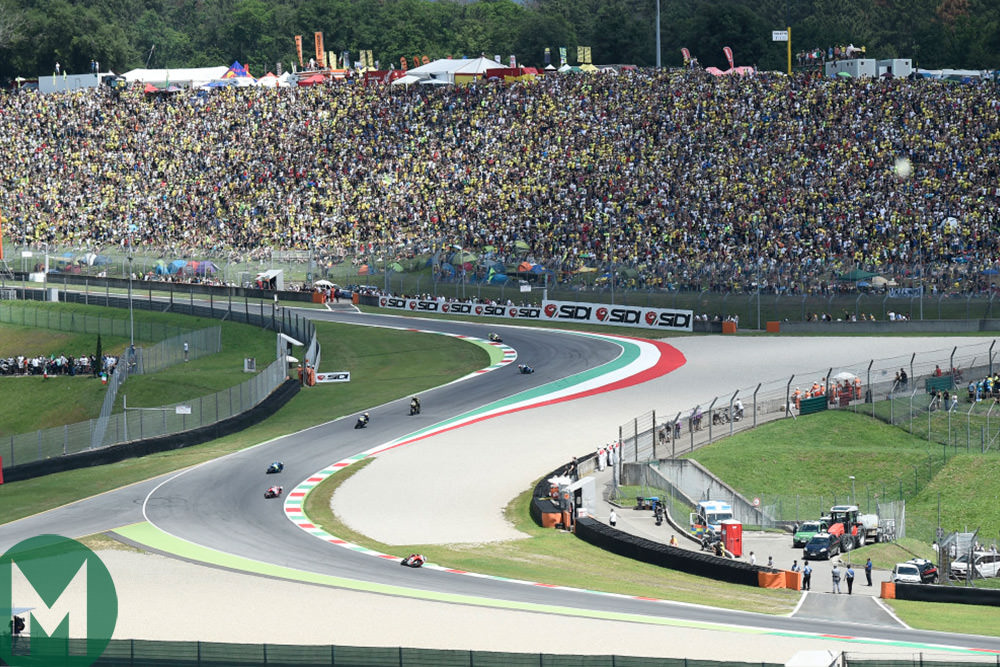 Mugello is one of my favourite tracks, nestled in the Tuscany Hills in the northern central part of Italy.

One of the reasons why is that it’s extremely technically demanding, which is why it’s a great test track and why Ferrari and Ducati and other manufacturers test there. It’s a very exciting circuit, and I won my first Grand Prix there in September 1982, my first season. Then it was the San Marino Grand Prix. The Italian Grand Prix, or the Nations Grand Prix at the time was at Misano in Spring 1982 – they ran Mugello in the Autumn.

The other thing that makes it special for me is the fact that I won in 1985, and that was the first time I won both races on the same day. It was a very difficult track because of the heat. As it’s in the middle of the valley, it makes it an incredible standpoint for spectators but, it also makes it very hot. That makes it physically demanding and tough on set-up and tyre choice. I won both races in 1985 and that was the toughest day of the season, but one of the most special.

Going into the weekend, you always expect the crowds to favour their local hero, Italian legend Valentino Rossi, and going into qualifying he pulled the rabbit out of the hat and what a great qualifying performance it was. I don’t think anybody expected it, but he certainly pulled it off.

It’s one of the things you have to love about the Italian fans.

Coming from the USA, I’ve always appreciated their passion. It’s what makes the sport so great actually – the purity and passion that the fans are able to show and the riders are able to exhibit through their riding. Rossi did that with his pole position on Saturday.

Jorge Lorenzo, also on the front row, has had a terrible season so far with three races without points. He struggled, not so much in getting in a good lap time, but maintaining that pace after getting a relatively good start to the race – as he fades. He’s talked about the Ducati and how he’s wanted a longer fuel tank. That could be because of his arm length but also riding stability and support. In Lorenzo’s case, a longer fuel tank moves him back and gives him a better extension to his arms. He is then able to better maintain heavy braking and have more support with direction changes.

The Ducati, as everybody talks about, is a more physically demanding bike to ride than the Yamaha, and it takes its toll as the race goes on. It gets tiring. When you’re not comfortable on a motorcycle, which we know Lorenzo hasn’t been, it can certainly make it more difficult and you’re working harder to maintain pace on a bike you’re not comfortable on.

From what I understand, they’d been giving him incremental increases in the length of the fuel tank but they finally gave him a much longer one and maybe it paid off. It certainly looked like it.

Maverick Viñales, also on the front row, qualified third and he’s one of those riders who’s struggled with his mindset. You can see it’s taken an emotional toll on him but Yamaha has promised him – he said this post-race – that he was going to get a competitive bike.

It seems to follow the same pattern: as soon as the bike’s fuel load bleeds down as the race goes on and the tyres wear and grip goes away, Viñales seems to be able to maintain the pace. As we saw in qualifying, he put in a great lap but he struggles with stability.

That problem is similar to what Lorenzo faces on the Ducati but for different reasons. Still, he’s working hard and it takes its toll and when you’re working too hard on the bike and you don’t have that comfort, what suffers is your consistency and your ability to run consistent lap times in the race, which is what’s required to maintain contact with the front or win the race and possible the Grand Prix.

In Viñales’ case, he started out quickest in 2017. Then he struggled. He shows moments of brilliance but he just signed a two-year contract with Yamaha and seems to already be frustrated and struggling. Hopefully it’ll work out.

Before we move onto the race, a couple of things: Michele Pirro had an incredible crash in FP1. He crashed coming up over the rise into Turn 1. The bike gets unstable there and pretty light, and it was that way in my day. You can’t really see it on the replay but the downhill stretch into Turn 1 is pretty steep, and going heavy on the brakes as the bike settles, you really have to brake hard which lifts up the rear because of the slope of the track but also because of the load on the front brake and tyre, which put him out of shape. The photos showed that he was very fortunate that it threw him forward because of the speed he was going at. He hit the ground very hard and was knocked out, but he was able to get up without any broken bones and he’s going to be OK, and that’s good news.

A shout out to Bradley Smith as well, who was hoping to get the second Tech3 ride but that went to Hafizh Syahrin. What’s going to happen with Smith? We’ll have to wait and see. He’s talked about getting a test ride and staying in the MotoGP paddock, but he’s considering retirement. He doesn’t have any interest, he said, in going back in racing in Superbikes, such as BSB or WSB. I know the British fans in the UK will be keeping their fingers crossed that Bradley will get to the place he wants.

Cal Crutchlow was right up there, and I felt that he rode a good race considering that he’s really struggled in the last few races with crashes up front. For him, the most important thing is to score some points, I feel.

Marc Márquez tested there a few weeks ago and he unofficially set a new track record, so you felt that he had a chance at Mugello becasue it is a track that suits his aggressive riding style. But the issue is always tyre performance, and whether Michelin would bring a strong enough front tyre that would last the whole race. You could see that he had his crash, as usual, but he was OK after practice.

Going into the race, it was unexpected that Márquez didn’t qualify as well as he should have.

At the start of the race, Lorenzo got out front, but could he maintain that pace?

As the race went on, he showed that he could. Márquez really pushed hard at the beginning but collided with Danilo Petrucci at Turn 2. Petrucci had a meeting before the race about penalties and he felt that Marc took some liberties there. You could see that Marc knew that he needed to be aggressive. He actually said after the race that he didn’t think he’d have the pace to compete with Lorenzo, which was interesting.

As the race went on and Jorge stretched it out, never getting out of the 1min 48sec barrier, and he maintained that rhythm. That’s all that he needed to do. He needed to believe, get on the bike and get the set-up right and it paid off. For him, the relief that he would feel because of what’s been said and knowing his days at Ducati were numbered, was palpable.

Andrea Dovizioso also did what he needed to do. He’s certainly struggled in the last few races to score points, losing so much to Márquez in the standings. So if he could’ve won the race I believe he would’ve tried, but he eased up in the last few laps. Maybe he eased a bit too much, as Rossi caught right up to him going into the last lap, but it was a pretty safe second place.

Rossi had a great run to finish third, showing that Viñales and Johann Zarco struggled with grip. It was a great lap for Rossi and the fans were really excited about pole, with the yellow mist.

Two riders, however, had a change of fortunes over the weekend.

One was Dani Pedrosa, in his 12th season with the HRC team in MotoGP and I’ve said this many times: I’ve been so impressed over the years with what Dani can do on a MotoGP bike considering his size. It’s not being critical of his size, but it’s what he’s been able to do with his size. The leverage that he gets and the control of the bike that he has, I really respect. As a kid I had to learn to do that when I was learning to ride, and it gave me an incredible ability to understand what a motorcycle can do and how to get the most out of it. Not only that, it’s the way he’s done it and the style he’s done it and when he parted ways with HRC there was no bitterness and he said ‘thank you’. He’s done a great job there, and he knew it was coming. He qualified 20th and had his crash in the race and wants to end the season on a higher note. They are going to announce some moves at Barcelona next week, and it will be interesting to see where he goes from there.

Jorge will now be taking Dani Pedrosa’s place at HRC. Did that come about after his win on Sunday? Perhaps. They did say something would be announced by Barcelona. It’s a real change of fortunes, and that’s one of the great things about racing – Lorenzo certainly did that. There was talk about retirement but he put that speculation to rest.

It will be interesting to see, as Lorenzo partners Márquez, what happens next season.

But we still have a long time to go this season: will Jorge win another race for Ducati? How will Márquez come back?

I’m looking forward to the race at Barcelona, and I hope you are too.