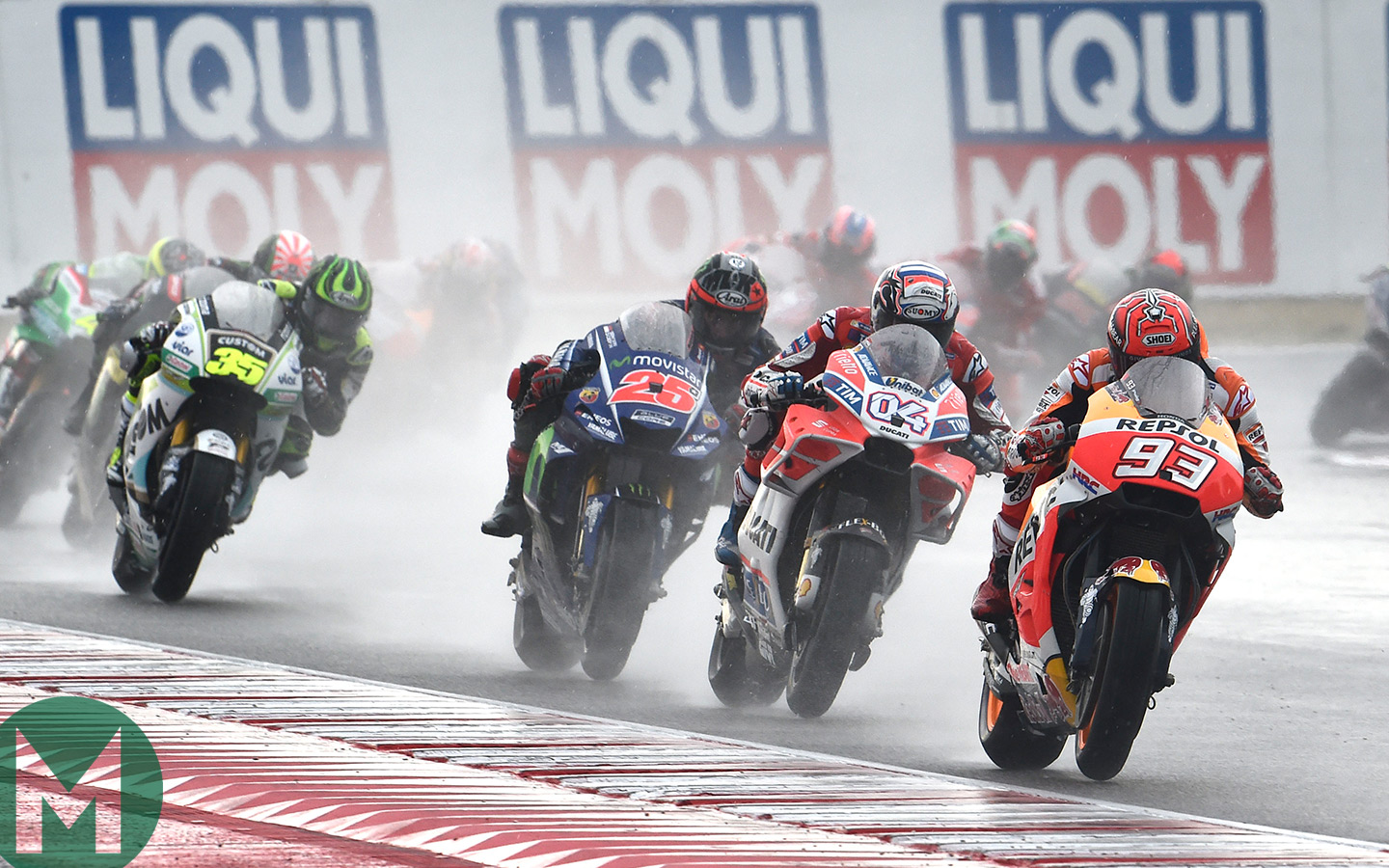 The Misano Circuit is one of the most technically difficult tracks for the teams and the riders. I raced there many years ago and won the Italian Grand Prix when it actually ran in the opposite direction. But after 1993, they changed the direction of the circuit.

Off the long straightaway you had three very fast right hand corners decreasing in speed and in fact the first corner was close to about 280 or 300kph. The riders were perhaps a little bit on the brakes, but mainly rolling off the throttle and decreasing their speed, getting the bike stable through there and carrying enough momentum.

Absence of the hometown hero sours the weekend

This weekend was certainly a disappointing one for Valentino Rossi, the fans and the world championship as he wasn’t going to be able to race at his home Grand Prix. He had a crash a few weeks earlier riding an enduro bike and many people of course questioned that. In fact, Valentino immediately said that he was sorry about the crash, because it was very emotional for him.

At 38 years old, Valentino has been inspired to race for a lot of years at a very high level and over those years you have to develop different things that inspire you to keep going. I think in the end of the 2000s it was making that transition to Ducati. Of course there was a little bit of help with Jorge Lorenzo coming along as I think that changed his relationship with Yamaha, but also he needed a new challenge and so he was signed by Ducati to race in 2011 and 2012. It didn’t go very well for him, so he went back to Yamaha and when I talked to him at the end of the 2013 in Japan and riding the elevator together, he said he was really concerned if he would ever win a race again. He was very happy to get that win in the Dutch Grand Prix earlier in the year as it gave him the belief that he could still win a race.

Was Valentino right to go dirt-tracking?

He was also starting to ride a lot of dirt at his ranch, something that has been well publicised and talked about. That has sharpened his skills and in fact I think enhanced him a little bit more. With the electronics on the modern MotoGP bikes, you can keep the wheels in line pretty easily, but when you see a rider like Marc Márquez, who came along in 2013 with his skills to be able to push the limits of what the bikes could do – along with the fact that he’s a very good dirt-track rider – that really makes it difficult for the other riders to keep up and to keep pushing the performance.

The electronics have a tendency to keep the bikes pretty well under control and so the rider has to be able to make the difference and push the limits a bit further. Riding a dirt-track bike does that. It’s well publicised that that is what helped the Americans when they came along in the late ‘70s and into the ‘80s, to be able to ride the 500cc bikes at their limits and a little bit beyond. It teaches you bike control and to be able to use the front and rear-tyre as Marc does so well and to be able to manipulate it to change the bike direction.

It rained a little bit on Friday during the first practice and the conditions were pretty cold. That affected the grip levels and we saw in qualifying that the lap times were about half a second slower than the pole record from last year that Jorge Lorenzo set.

Maverick Viñales, the only factory Yamaha rider out there this weekend, was on pole with Dovi second and Marc third, but the times were pretty close. We’re seeing that a lot this year and really, it began last year. With Dorna bringing in the standard ECU, the black box that controls the electronics the same way for, it’s kind of stopped the development. Over the years, when you see massive increases in performance, that’s because the talented riders are able to make a difference because they can adapt to the changes a little bit quicker. But I think with the common ECU, if you look at the speeds over the last few years, they haven’t increased that much.

It allows the teams development, both factory and privateer, and levels the playing field, bringing everyone closer together and making for great racing. Dorna has done a good job in providing more of a level playing field for the teams and for the riders. Again, that allows the drivers with a little less ability to be able to adapt to the bikes and bring things along – but it’s also true that there’s just more talented riders across the board now. 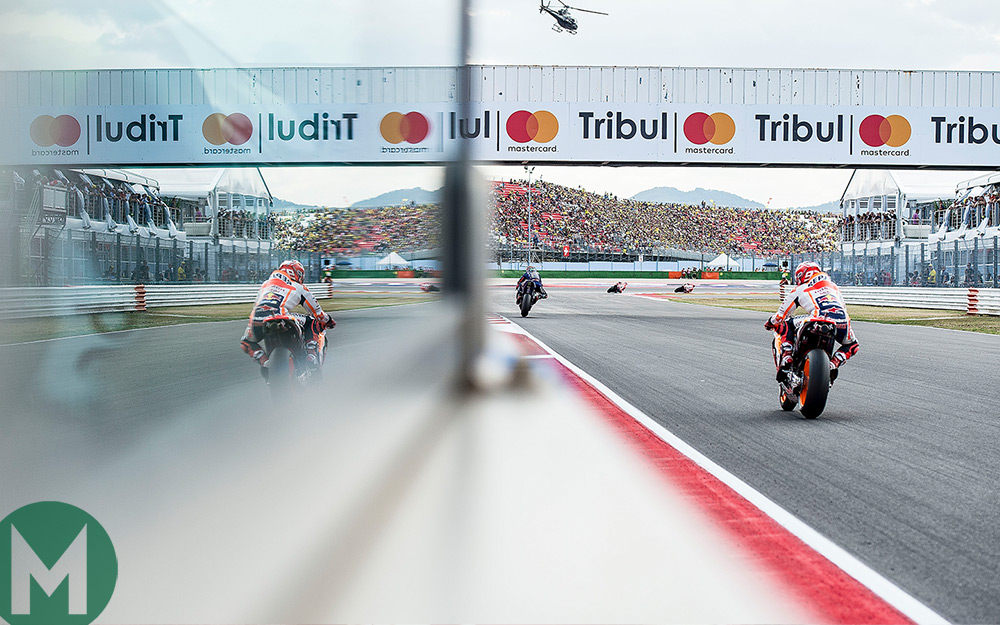 Lorenzo offers a hint of his potential, but Márquez and Petrucci master the conditions

On race day the conditions were still a little bit on the cool side and concerns were there for the grip level. What Dovi could do in the race was going to be the interesting story – could he still maintain that momentum and win another race, especially in Italy with Valentino not there? There was also the question of who were the Valentino fans going to be left rooting for? I think Dovi was definitely the favourite for them, being on the Italian Ducati, but also Petrucci.

The race started and as we’ve seen over the last few races, Jorge Lorenzo got out front in the wet conditions and was able to pull away. It’s interesting because over the last few years we’ve seen him struggle in wet conditions and his confidence level has been a bit lower, but not on Sunday. In fact, he was pulling away and right before he crashed, the 1min 47sec lap time that he ran was quite a bit quicker than anyone else could achieve – but he did crash. He explained how he lost focus as he was adjusting the map and got distracted, so a very honest answer. We’ll have to see if that form will continue on into the next race and if he can put it together and maybe win one of these.

As the race went on it was basically three riders in contention: Petrucci, Marc Márquez and Dovi. You could see Dovi had a different mind-set leading the championship and in those tricky conditions he just sort of hung in there, whilst Petrucci looked like the one who would maybe be willing to take the most risks. He really put in a great ride throughout. But with about four or five laps to go, Petrucci and Marc had pulled away, Dovi had fallen a little further back and then the question was going to be would Marc take the risk and try to win the race?

You could see it coming. Coming out of the last corner with one lap to go, he got a great drive and passed Petrucci on the last lap of the race, which was also the fastest lap of the race. That win puts him right with Dovi on 199 points each. Another great performance by Marc, a very good ride for Petrucci to get second although he was certainly disappointed not to win his first race and Dovi did what he needed to do – finish and score some points.

It’s certainly going to be interesting now with just a handful of races to go. What will happen at Aragon? Will Valentino come back as he has talked about doing only 20 days after his injury, or will he wait for three weeks after that in Japan, and what will happen with the championship?