The weekend’s biggest news was hardly news at all but it was the biggest story of the weekend anyway.

After 21 years as a factory rider for Aprilia, Honda, Yamaha and Ducati, seven-times MotoGP world champion Valentino Rossi finally gets demoted to an independent team in 2021.

It had to happen, of course. Time waits for no man – not even a superhuman like Rossi – so his career could only end two ways: via retirement or via relegation from a factory team that need to sign the fastest riders with the best futures.

All racing careers are like mountains. You climb to the top, enjoy the view for as long as you can, then you descend the other side, either by tripping and falling, then plunging to the bottom with a broken body, or by gracefully taking your time, acknowledging the cheers of the crowd with every downward step.

Rossi’s mountain has been more of a plateau: he has been sauntering along elevated ground for two decades or more and he has yet to commence his comedown to join us mere mortals on ground level.

The big question is this: is his move to Petronas Yamaha SRT really a demotion? In theory, yes. His contract remains with Yamaha Motor, so he is a full-factory rider, but he has been placed in a non-factory team, like Jack Miller’s current Ducati/Pramac contract and Cal Crutchlow’s current HRC/LCR deal.

He will therefore start the 2021 season with a full-factory YZR-M1, but all update parts will go to factory Monster Yamaha Maverick Viñales and Fabio Quartararo.

This is not necessarily a bad thing. It could be the best thing ever.

You would think that a regular supply of hardware and software improvements from the factory would help riders constantly improve their performance.

In fact, this is not always the case. In the second decade of the 21st century there is no such thing as a bolt-on part that instantly makes a significant improvement to performance. MotoGP bikes are too advanced, too refined for that. Each new part must be endlessly analysed on track and via data. And if the part does offer an infinitesimal advantage in one area it may well give a negative at another. This all adds up to wasted time and potential confusion.

I’m not criticising the factory Yamaha team, because it’s no coincidence that the squad has been in trouble ever since the switch to Michelin tyres in 2016. 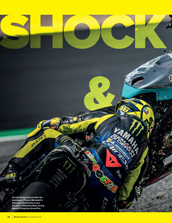 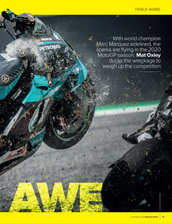 Nature abhors a vacuum, so when reigning MotoGP champion Marc Márquez crashed out of July’s season-opening Spanish Grand Prix, ruling himself out of the title fight, everything changed. Márquez’s absence…

Ever since then – at least until the 2020 rear slick arrived – the M1 has been unable to use its strong points and has been hurt by its weak points.

Consider all the multiple different chassis the factory Yamaha team used between 2016 and 2019, trying to find more grip.

During that period Rossi and Viñales tried this chassis and that chassis, then kept swapping this way and that from one track to the nest. One year they ended the season by switching to the previous year’s chassis at the last race. That’s what you call confusion!

Meanwhile the satellite teams – Tech 3 and then Petronas SRT– kept racing with what they’d got. Their bikes remained mostly unchanged, because the factory policy is to develop the bike with its official team and leave its indie team on older, lower-spec kit.

Even better, the year-old bikes given to Tech 3 and Petronas (with the exception of Quartararo this year) have a full season’s development behind them, with a full season’s data. So they are in the best state they can be in. Meanwhile the factory riders start anew every season, building data, building knowhow, race by race.

Occasionally the indie riders complain they wanted the later kit, but mostly they continue turning laps with what they have. And this is the secret to success in motorcycle racing.

Bike racing is 99 per cent about feel, so the more laps you ride without changing the set-up, the more you get to know your bike and the more intimate you become with its behaviour, so when the front tyre slides you’re already expecting it, so you’re ready to do whatever you need to save that slide.

When you go out to ride with a new chassis or significantly different settings you have none of that intimate knowledge, none of that ability to predict the motorcycle’s behaviour, so when the bike does something bad it mostly catches you by surprise.

There is proof to all of this. Look at the results of indie Yamaha riders over the years: Quartararo, Franco Morbidelli, Johann Zarco, Crutchlow, Bradley Smith, Andrea Dovizioso and so on.

Their achievements on indie M1s are proof of the fact that it’s easier for a rider to find a hundredth from within himself than from the motorcycle. True, Rossi will have 2021 bikes next year, but he won’t have engineers thrusting new bits and pieces at him all the time, which may or may not work. 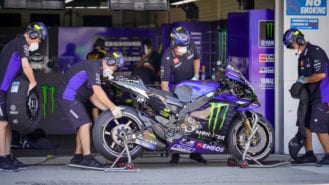 Alex Briggs raced motocross when he was a kid, got a job as a motocross mechanic as a teenager and landed his first gig in roadracing in 1993 with Rothmans…

There are other positives to Rossi’s move from factory team to indie team.

At his heart Rossi is a hippy, like his dad. He may fly around in private jets and enjoy sailing the Mediterranean on flashy boats, but he’s just a hippy with a few hundred million in the bank.

Therefore he will most likely enjoy being in a lower-key team, with fewer layers of management and (hopefully) fewer corporate duties to perform. Also, he reminded us at the weekend that he won his first premier-class title – the 500cc world championship with Honda in 2001 – riding for an independent team, working alongside, not inside the corporate structure of HRC.

Another big question is this – is Petronas ready for Rossi? The team has done remarkably well during its first two seasons, largely thanks to the skills of Quartararo, who the team took on board thanks to massive pressure from the French Yamaha importer, rather than its own intuition.

Rossi’s status as the paddock superstar – worshipped by fans at every race – will force Petronas to work in a new way, if the team doesn’t want to be besieged by well-wishers throughout the weekend, distracting its staff from their jobs.

The final question is how will Rossi get along with his crew no longer intact? Throughout his premier-class career the Italian has mostly kept the same people around him because that’s the way he likes to work.

He calls his crew his family, but at the end of this season he will say goodbye to two of his most faithful family members that have been with him for decades. 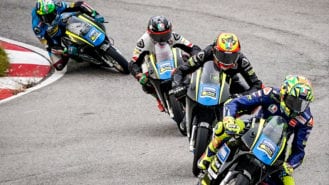 Australian Alex Briggs helped Mick Doohan to his five 500cc titles and was part of Rossi’s crew from the end of 1999, alongside fellow Aussie and crew chief Jeremy Burgess.

New Zealander Brent Stephens was with the factory Yamaha team when Rossi switched to the marque in 2004, so he was assigned to Rossi as the ‘Yamaha expert’ in the crew.

“I fought a lot to have all my team when I move at the end of this year, but sometimes it’s impossible,” said Rossi at Barcelona. “At this moment of my career it’s normal everything is not going to be perfect for me. Unfortunately it’s not possible for Alex and Brent. I’m sad, but it’s like this.”

No one knows why Petronas doesn’t want Briggs and Stephens. Apparently, the issue wasn’t money, so what was it? Perhaps Petronas SRT wants to stamp its authority on the situation and make sure that Rossi knows who’s in charge. But will the team find two mechanics who can work really well with Rossi and cope with the pressure of spinning spanners for the biggest name the sport has ever known?

Next year Rossi will also lose his other longest-standing mechanic, Bernard Ansiau, who will stay with the factory team. Ansiau has quite a CV: three 500cc world titles with Wayne Rainey, five with Mick Doohan and seven 500 and MotoGP crowns with Rossi.